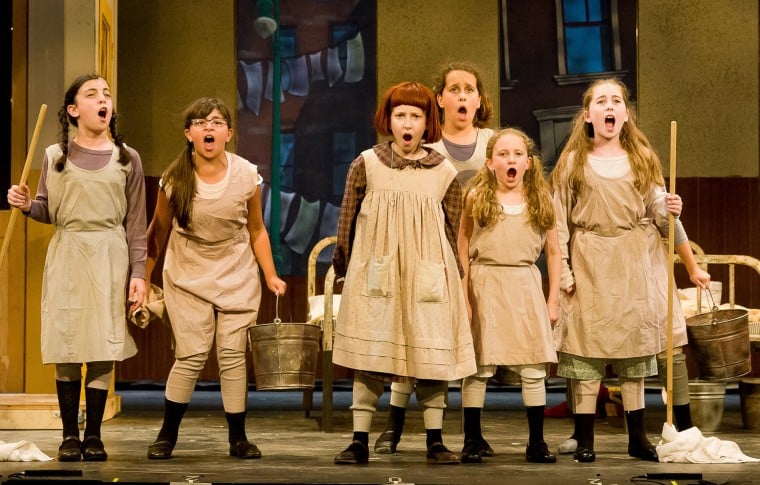 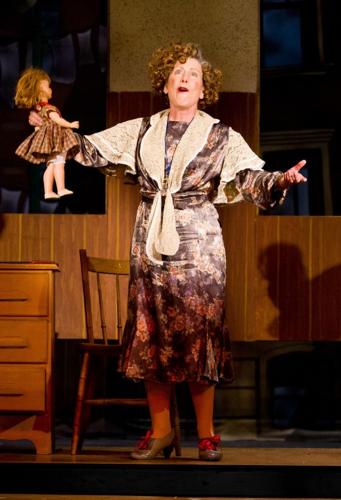 Jan Neuberger as Miss Hannigan in Theatre By The Sea’s “Annie,” which is playing through Aug. 10.

Jan Neuberger as Miss Hannigan in Theatre By The Sea’s “Annie,” which is playing through Aug. 10.

SOUTH KINGSTOWN — Opening night of Theatre By The Sea’s “Annie” started with a situation that spawned the musical “42nd Street”: The leading lady becomes ill, cannot continue, and a star-to-be steps in to save the day.

In the case of “Annie,” – the musical about a spunky orphan who wins the heart of a billionaire industrialist during the Great Depression – not one, but two major roles were replaced between final preview and opening night. During Act I of the July 18 preview, Raquel Leifer, the 12-year-old girl from New Jersey cast as Annie, fell ill and couldn’t continue. Her understudy finished the show.

Producer Bill Hanney tracked down Lauren Weintraub of Sudbury, Mass., the now 14-year-old actor who played Annie during last summer’s run of the show at North Shore Music Theatre in Beverly, Mass., Hanney’s other theater. After a mere six hours of rehearsal, Weintraub stepped into the leading role, adjusting to a different cast, different dog and different kind of stage – North Shore’s stage is theater in the round.

On top of that, Leifer’s little sister, Jillian, who had been cast as Molly, the youngest and busiest of the other orphans, also left the cast and was replaced by her understudy, Eva Senerchia of Warwick, whom audiences will remember as the pint-sized Gretl with the big voice in last season’s “Sound of Music.”

Oh yes, and it was more than 100+ degrees onstage during last week’s heat wave.

As Annie would say, “Leapin’ Lizards!”

Friday night could have been a disaster, and it is a mark of the professionalism of all involved that the show was a delight. Had Hanney and Director/Choreographer Richard Sabellico not made a curtain announcement about the changes, I doubt most in the audience would have realized. Friday night’s show lacked the sparkle of the season’s first two shows, but it was a solid, enjoyable, fast-paced production, and an audience pleaser. I have no doubt it will sparkle, once the changes settle in.

Weintraub is a terrific Annie. She is sweet and optimistic, rather than spunky and optimistic, with a winning stage presence and a strong voice. Despite very little rehearsal with this cast, she has a nice rapport with Daddy Warbucks (Todd Fenstermaker) and his secretary, Grace (Margaret Loesser Robinson).

Fenstermaker doesn’t stray from the usual portrayal of Warbucks as a gruff, arrogant billionaire who doesn’t really warm up until his final song and dance with Annie, “I Don’t Need Anything But You.” During that song, the pair was genuinely having fun. (As an aside, I would love to see a Warbucks who is a charismatic and charming workaholic entrepreneur, so Grace can be attracted to more than power. He is, after all, a Republican who wins over – befriends! – a Democratic president and his cabinet.)

Robinson has a lovely voice and provides a nice balance for Weintraub and Fenstermaker.

Nathaniel Shaw is an appropriately sleazy Rooster Hannigan, the jail bird who uses his sister’s knowledge of Annie to con Warbucks. He, Neuberger and Becca Gottlieb (Lily St. Regis) shine with “Easy Street” their bluesy ode to crime.

Eva Senerchia brings a perky personality and a big voice to the role of Molly, though the traditional humor of Molly being the tiniest of the orphans, especially when she’s mocking Miss Hannigan, is lost, as Eva is as tall as the others. The other orphans, Taylor Rose Donovan, Lily McMahon, Jennifer Pamula, Nina A. Pezzello and Emma Senerchia are talented singer/dancers who tear it up in “It’s a Hard Knock Life” and get laughs as they thwart Miss Hannigan.

Macy, a mutt adopted from an Oklahoma animal rescue to play Sandy, got lots of “awwwwwwws” from young and old whenever she was on stage. Bill Berloni, Macy’s trainer, rescued and trained the original Sandy when he was an 18-year-old intern and used that experience to launch a career of training dogs to play roles in “Annie,” “Wizard of Oz” “The Wiz,” “Legally Blonde,” “The Christmas Story” and the new musical, “Because of Winn Dixie.”

Had Hanney gone with a lesser-trained dog from the community, last night’s substitutions surely would have caused even more confusion for the human and canine actors. Both Annie and Sandy need to be well-versed in the staging and commands and Macy, who has performed as Sandy in more than a dozen productions of “Annie” since 2010, handled the changes with aplomb.

Sabellico played Rooster during the show’s original six-year run on Broadway, 1977 to 1983, and this production keeps close to that in its staging and choreography, set and costumes. “Cats” and “Nunsense” also kept close to their original sources and still felt fresh. “Annie,” however, seemed dated.

Theatre By The Sea publicist Mike Ceceri said Weintraub was filling in short term and would be replaced by one of Leifer’s understudies. But this last-minute switch shows no matter who plays Annie, the show will go on at Theater By The Sea, and in a highly enjoyable fashion.

Managing Editor Liz Boardman may be reached at editorial@scindependent.com.

Should school committees and town councils be required to appoint the top vote-getters of an election to leadership roles?

Following a fairly tame election season (By local standards), the Narragansett and South Kingstown Town Councils got off to a rocky start last week as top vote-getters Susan Cicilline Buonanno and Deborah Bergner were each passed over for roles as their respective town's Council Presidents following controversial votes in the first meetings of both boards. The moves have sparked a local debate over the "tradition" of appointing the top vote getter of an election to the role of Town Council President, with supporters arguing such a move should be mandated as an indication of the will of local voters. Opponents argue the perhaps informal tradition is not a requirement by either town's charter and, as such, should be left for each individual body of government to decide amongst itself. Should school committees and town councils be required to appoint the top vote-getters of an election to leadership roles? Why or why not? Let us know in this week's poll question below.