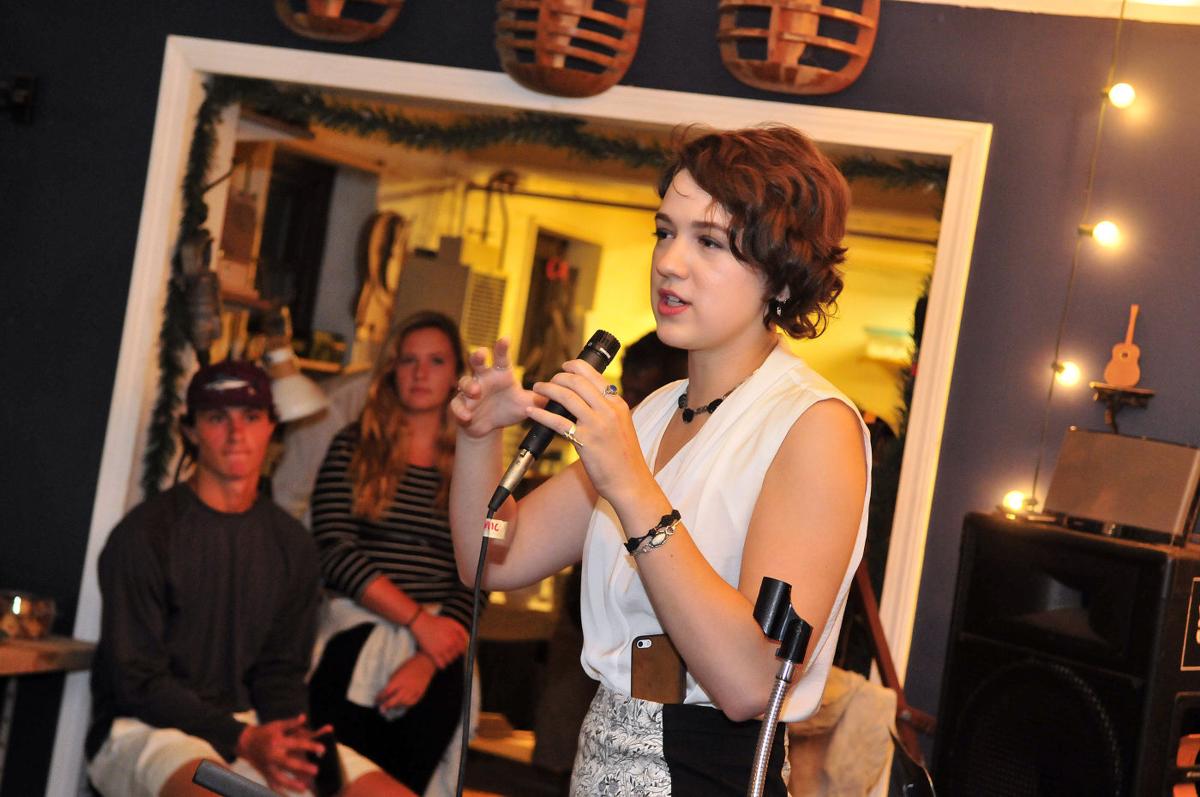 Ariel Rose Bodman, a luthier at Shady Lea Guitars, speaks Saturday during the evening's open mic night. She started the event last month with her partner, Dan Collins, and they plan to hold open mic nights on the last Saturday of each month at the Shady Lea Mill, 215 Shady Lea Road, North Kingstown. 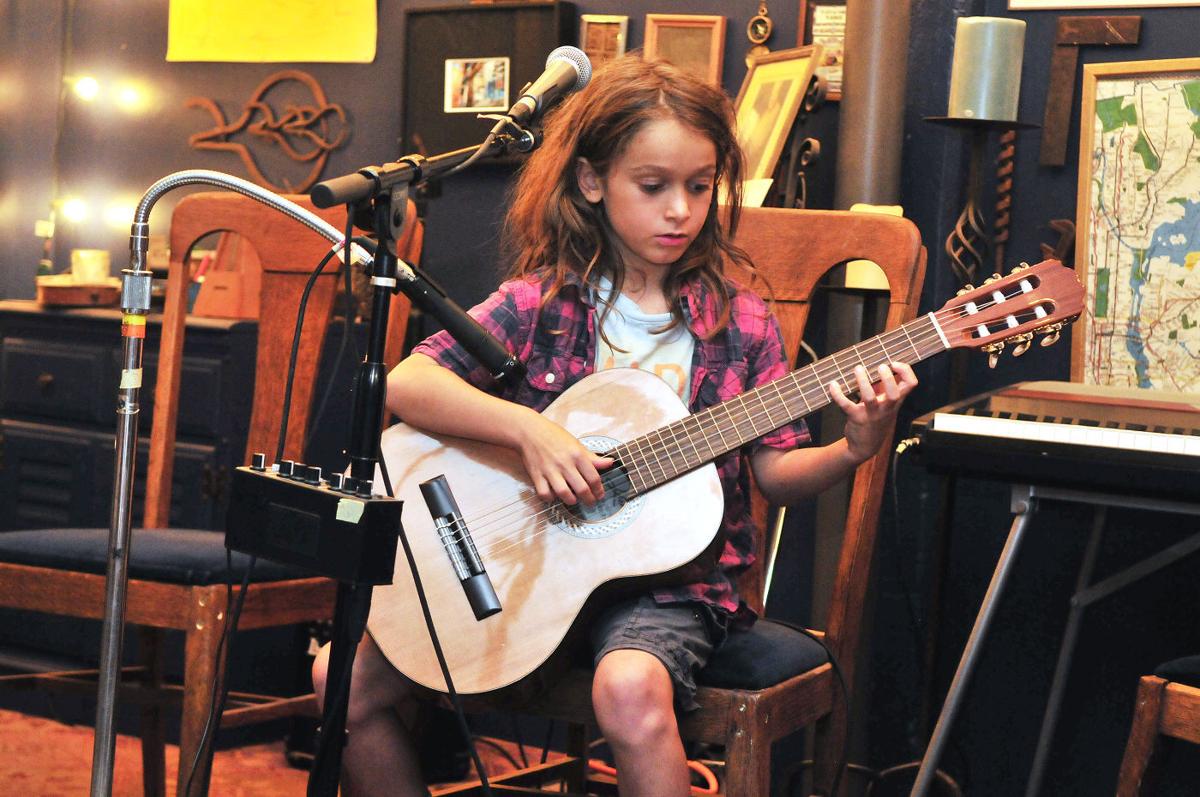 Leo Singer, 7, of Wakefield performs during Saturday's open mic night at Shady Lea Guitars in North Kingstown. He has been playing guitar for only seven months. 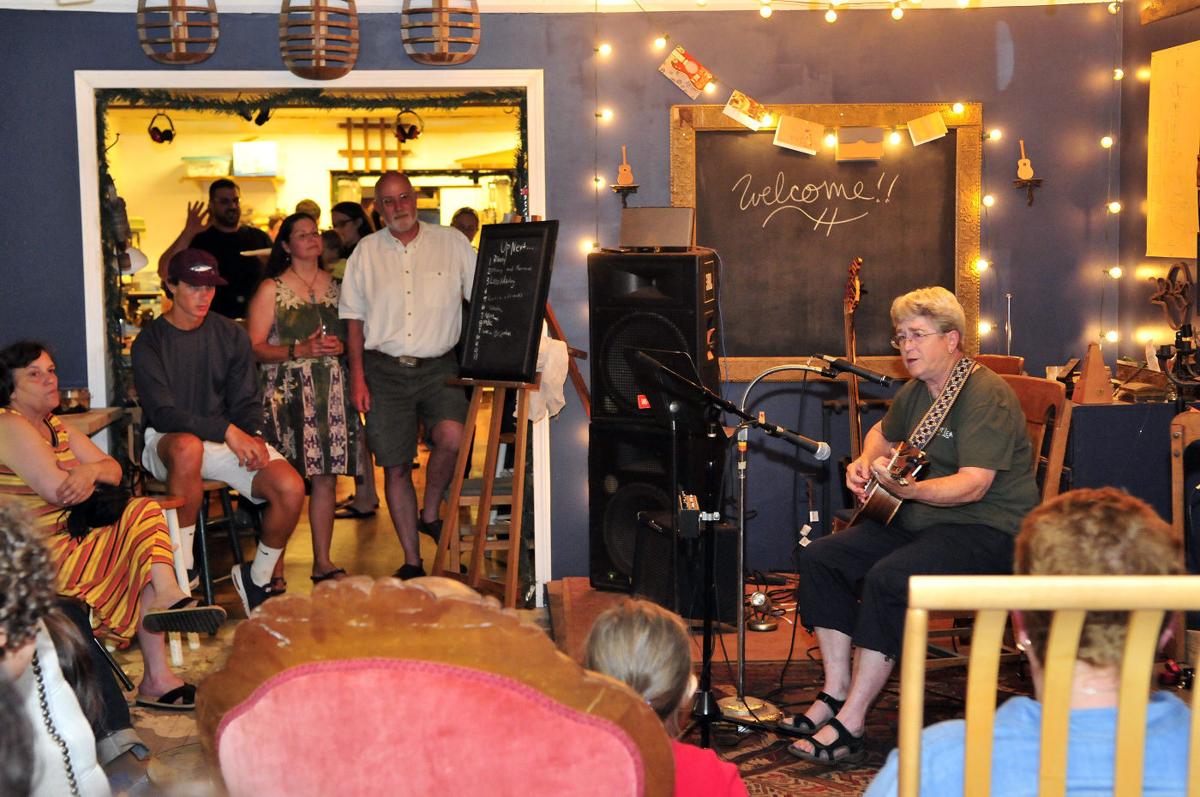 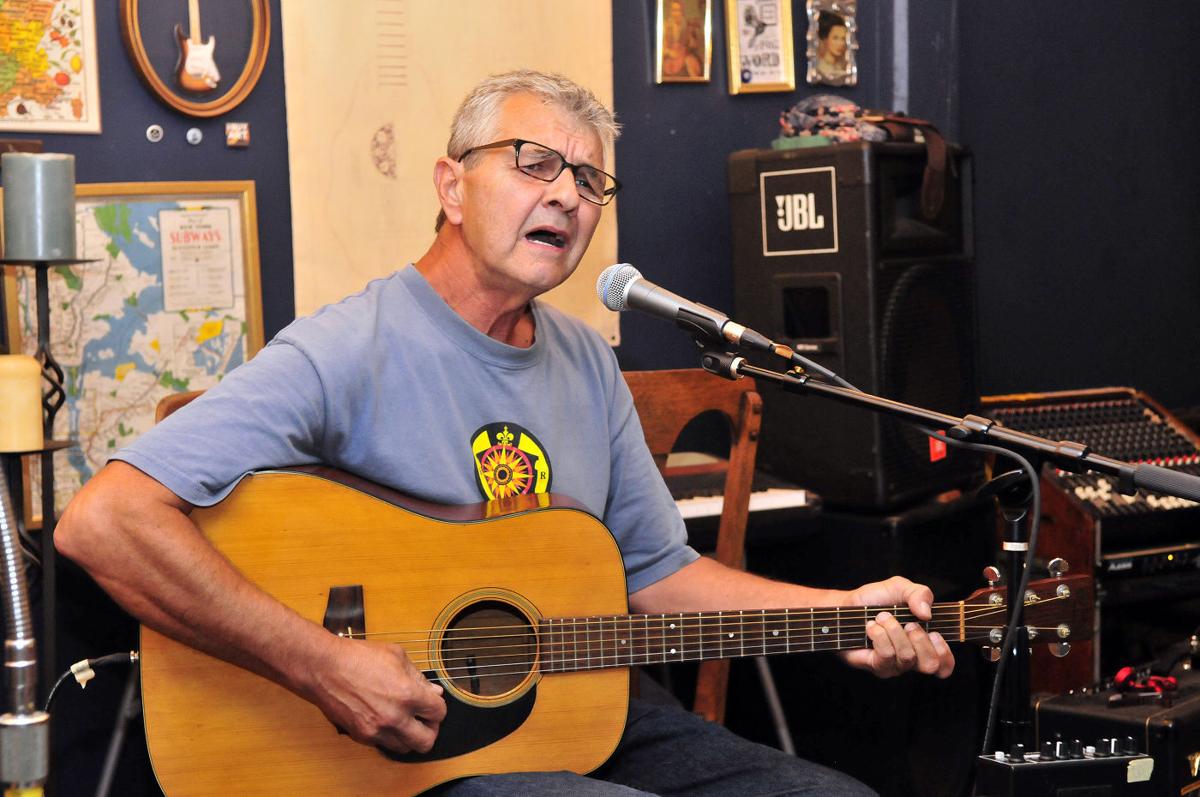 Randy Ducharme of Exeter, who has made several of his own instruments, performs during Saturday's open mic night at Shady Lea Guitars in North Kingstown. 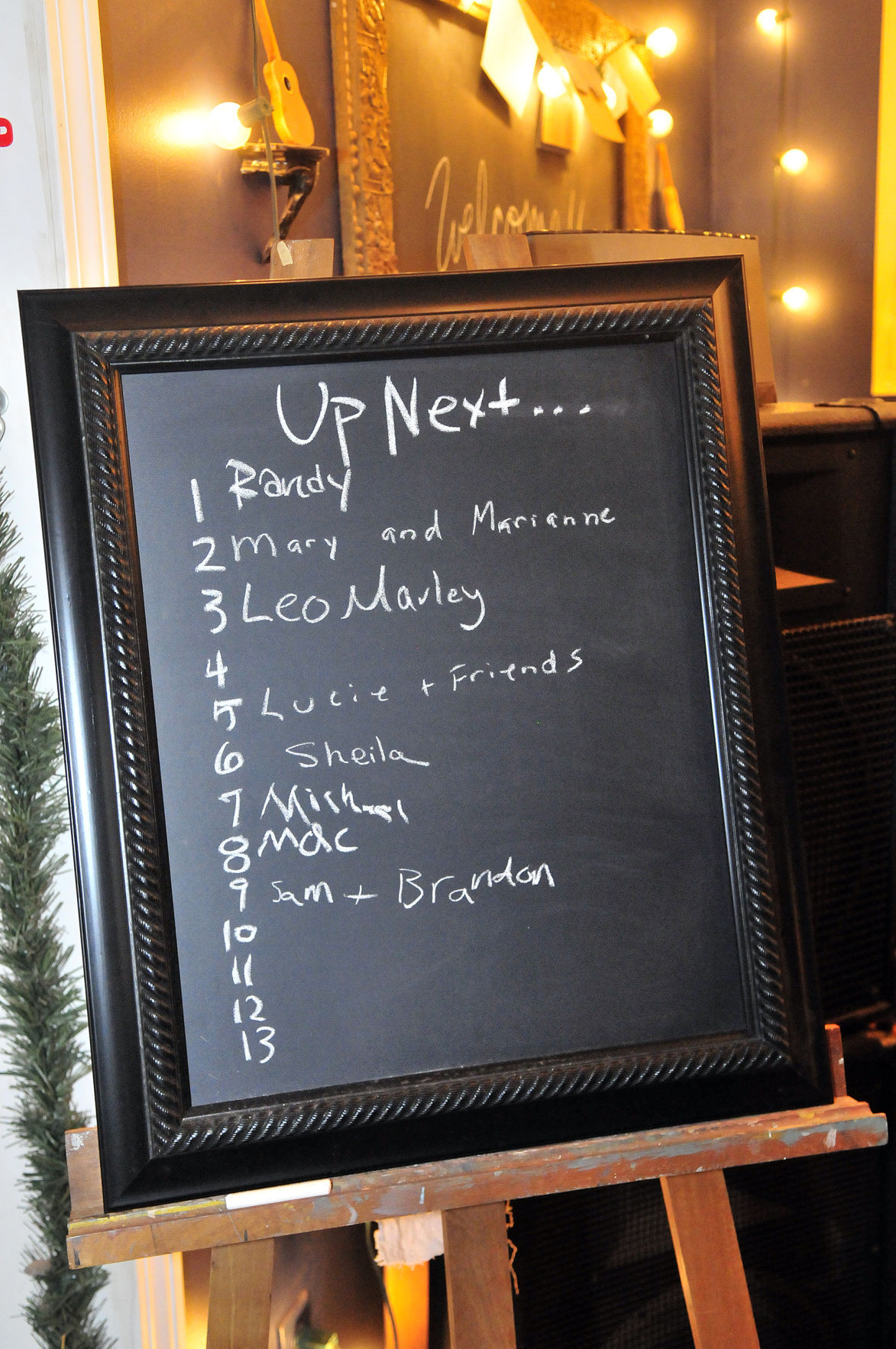 Twelve people eventually signed up to perform during Saturday's open mic night at Shady Lea Guitars, which was held from 7 to 10 p.m.

Ariel Rose Bodman, a luthier at Shady Lea Guitars, speaks Saturday during the evening's open mic night. She started the event last month with her partner, Dan Collins, and they plan to hold open mic nights on the last Saturday of each month at the Shady Lea Mill, 215 Shady Lea Road, North Kingstown.

Leo Singer, 7, of Wakefield performs during Saturday's open mic night at Shady Lea Guitars in North Kingstown. He has been playing guitar for only seven months.

Randy Ducharme of Exeter, who has made several of his own instruments, performs during Saturday's open mic night at Shady Lea Guitars in North Kingstown.

Twelve people eventually signed up to perform during Saturday's open mic night at Shady Lea Guitars, which was held from 7 to 10 p.m.

As a music enthusiast, I love live music and discovering new artists and venues. When I learned that Shady Lea Guitars in North Kingstown started hosting a monthly open mic night in July, I thought it was definitely worth checking out. I had been to Shady Lea Mill, where the shop is located, only once before, during the mill’s annual open house event in December, but remembered being impressed with the guitar space. I was intrigued, and curious about the sort of people who would turn up for the second open mic night.

And so I found myself there, with a few friends in tow, on Saturday evening. It started at 7 p.m., and I got there just after 7:30. As I arrived, a young boy who had just played was leaving with his family, and an older woman was setting up on the stage. About 40 people were gathered around the space, some sitting on folding chairs and others on vintage upholstered seats. The stage area was aglow with small globe string lights, accenting the rustic wall decor of guitar diagrams, small framed artworks, an assortment of tools, maps, mirrors and candles.

Old rugs line the stage, and the surrounding floor is painted a light blue and patterned with white silhouettes of guitars, fiddles and banjos – the instruments one can build at the shop, and borrow for a set. Tables of food and buckets with drinks were scattered around the space, showing signs of a true BYOB potluck.

Like most open mic nights I have been to, musicians are allowed three songs. Unlike other open mic nights, because the venue is not a bar, there were many children and teenagers in attendance, at least during the first half of the evening. For both the young and the old, it seemed a safe space to play, with many performers admitting they had never before performed publicly. Although some of the musicians’ confidence was wavering, the crowd was steadfast with its encouragement, often offering loud cheers when people made mistakes and became frustrated.

“This is a wonderful environment for firsts,” said Ariel Rose Bodman, one of the event organizers and MC for the evening, between sets. “If you’re going to try anything out, this is definitely the place to do it.”

Among those performing were many patrons of the shop, including students who were building their first instrument and others who were working on their sixth or seventh project.

Michael Caparas, 16, of Newport, a student at the Paul W. Crowley East Bay Met School in Newport and an intern at the shop, strummed a custom-made guitar. He brought a friend to the event, Mac Duggan, 14, also of Newport and a student at the Met School. Duggan, who said he began playing guitar about two years ago, chose to play an electric guitar.

Two University of Rhode Island seniors played together under the name South Tower Strummers. The duo consists of Sam Dufresne, 21, of Saunderstown, who heard about Shady Lea Guitars from a family friend. His mother gave him a gift certificate for Christmas, and he is currently working on his first guitar.

Brandon Kaplan, 21, plays the mandolin and said he would love to become a student if they start teaching mandolin-building.

Husband and wife Rick and Bridget Fullerton performed separately, one after another.

“I’ve never done this alone in front of people before,” Rick Fullerton said. “I’m always with my wife. She’s sort of my security blanket. I’m a little terrified right now.”

Bridget, who played first, was sitting a few feet away, offering smiles of support. The couple has a 10½-month-old baby who she said was at home with grandpa. They were there because Rick is a student at the shop, currently making his first guitar. He’d been wanting to build his own and then read about Shady Lea Guitars, and decided to enroll in February.

“He’d been looking forever,” Bridget Fullerton said. “For this place to just pop up out of nowhere was so good.”

Shady Lea Guitars became an official business about two years ago, although Dan Collins, 34, began teaching seven years ago. Raised in Matunuck, he studied photography in school and his first professional assignment was to photograph the process of making a guitar. He fell in love with guitar building, sold all of his photography equipment and opened a small shop at the mill, where he began teaching. As his business grew, so did the space. Shady Lea Guitars now spans three of the studio spaces for rent in the mill, with two rooms serving as workshop space, and a third room as a performance space.

“We’re slowly taking over the mill,” he joked.

Bodman, 23, originally from Ohio and a trained opera singer who studied for a time at Juilliard, was once a student at the shop. She said she fell in love with guitar building, and then with Collins. The two soon became partners, in both life and business, and now live in a brick house a few yards across from the mill.

When they came up with the idea for an open mic night, the intent was to bring newcomers into the space, let people learn about the building process and play with the instruments, and attract new students and clients. Judging by the 50 or so people who came through Saturday evening, I’d say they have succeeded in piquing interest, and that it seems likely the monthly crowd will grow as more and more people get word of the event.

If you, like me, are curious, visit their website for more information at shadyleaguitars.com, or attend the next open mic night Sept. 26. Be sure to bring some food, a friend or maybe just a fiddle.