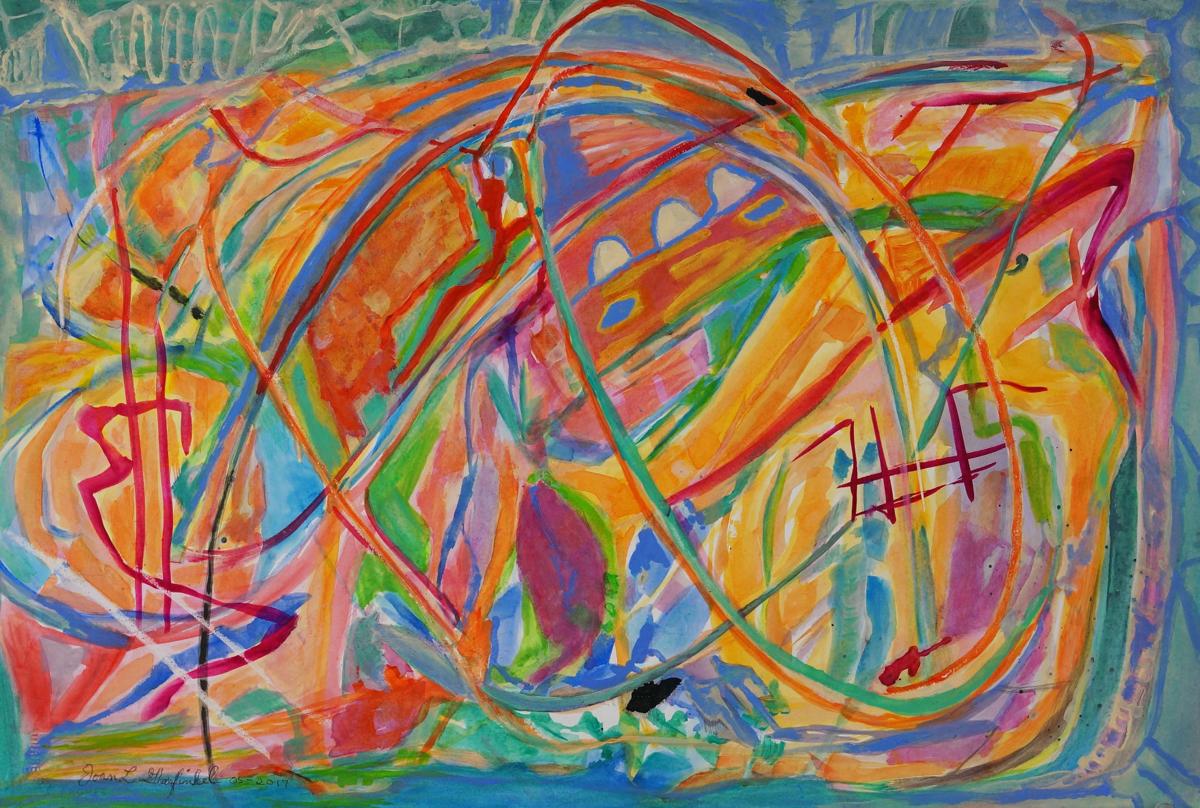 Pictured at left is Joan Garfinkel’s painting “Music Through the Spheres” and, at right, is “Quixotic Knight.” 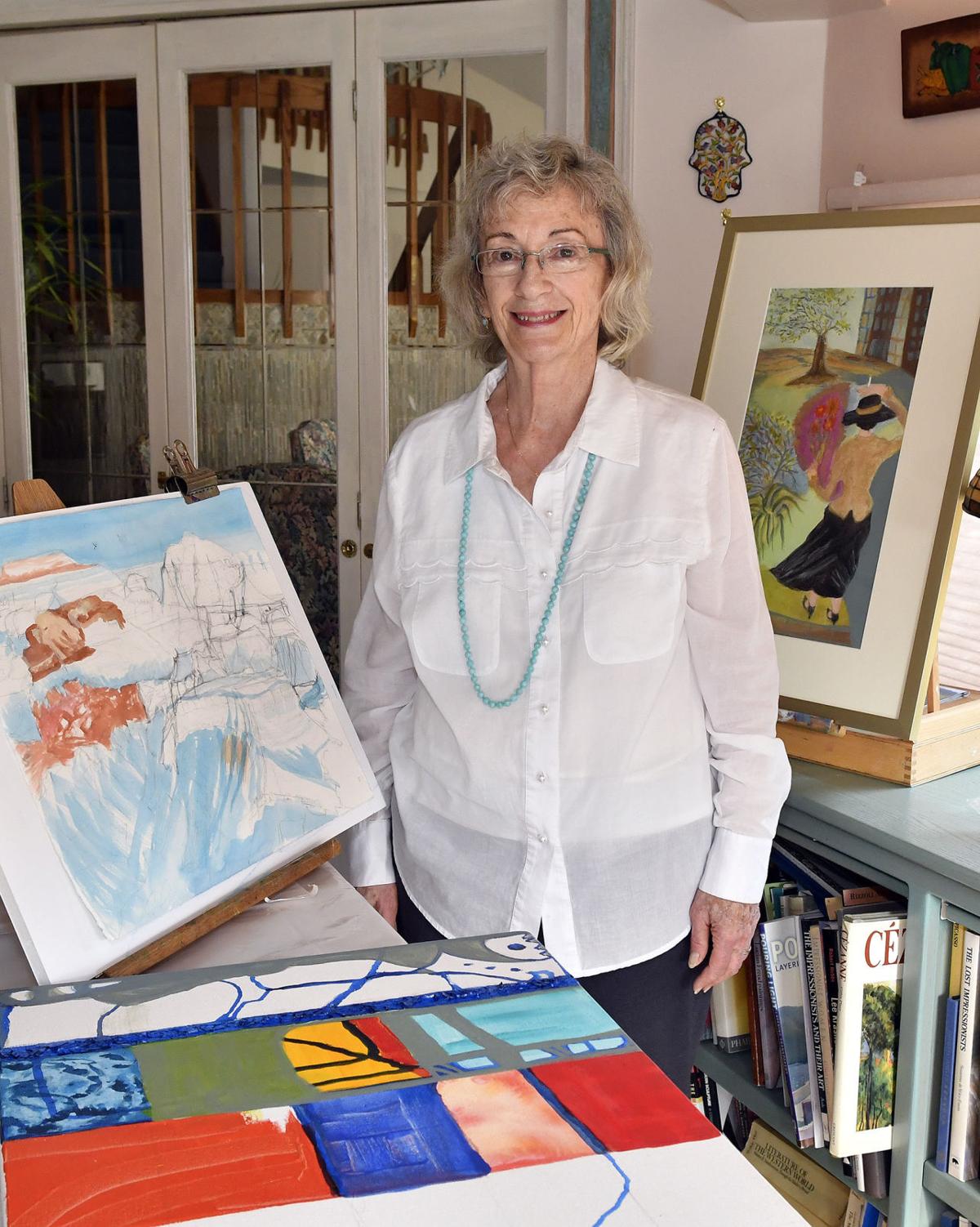 Joan Garfinkel is pictured in her Narragansett home studio. 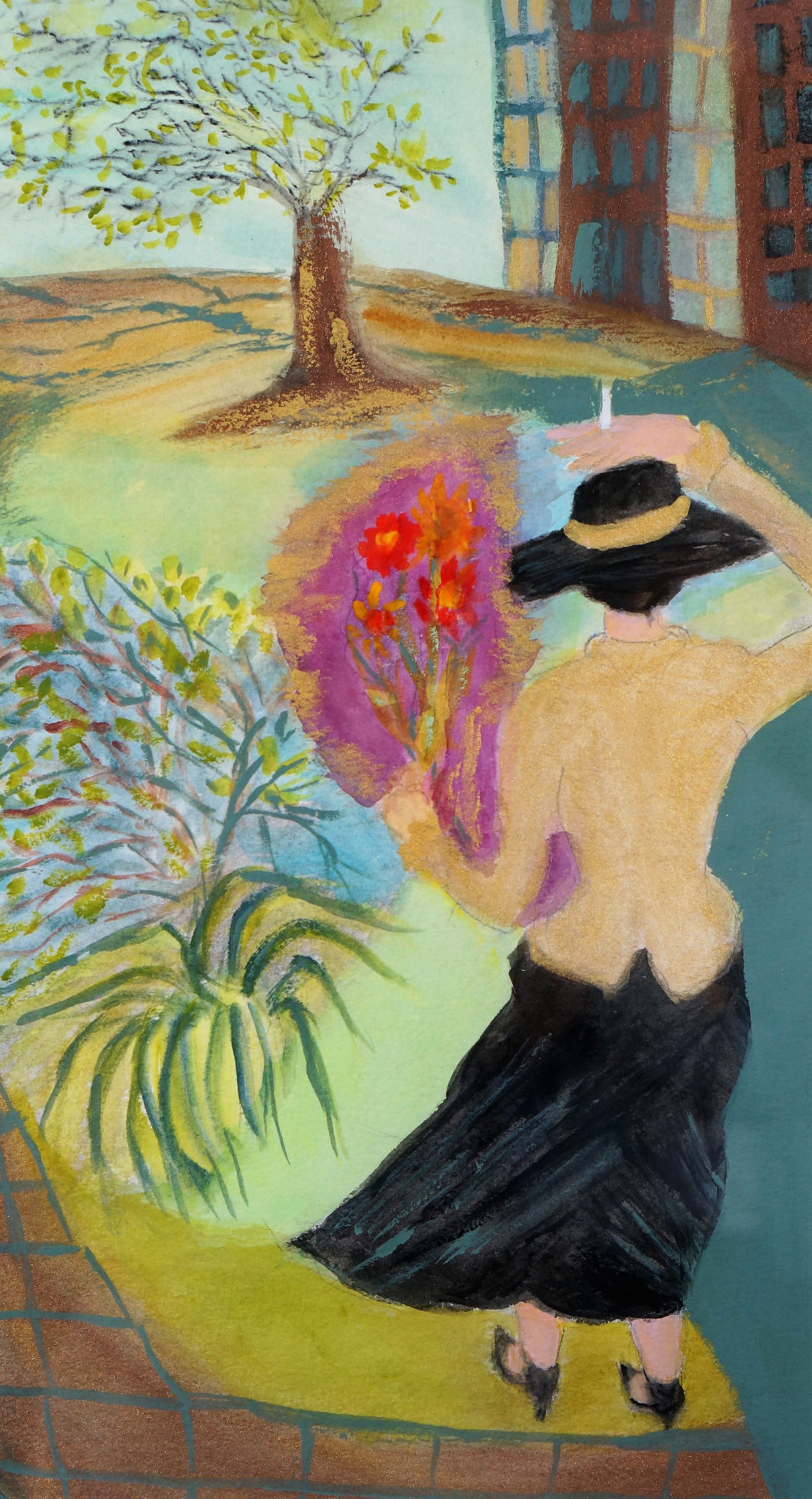 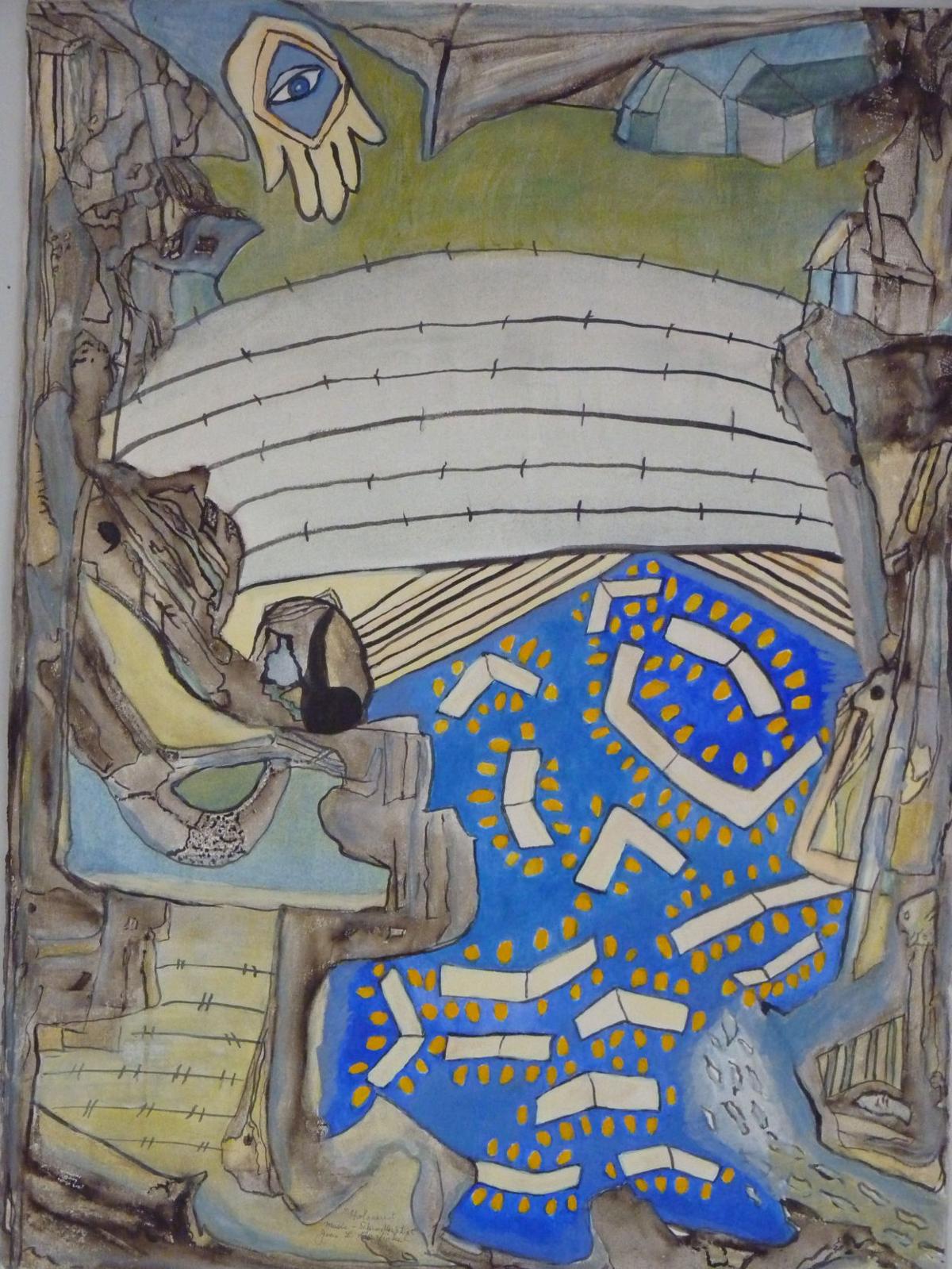 “Holocaust – Painted to the Music from Schindler’s List” was submitted by Joan Garfinkel for an international art show. 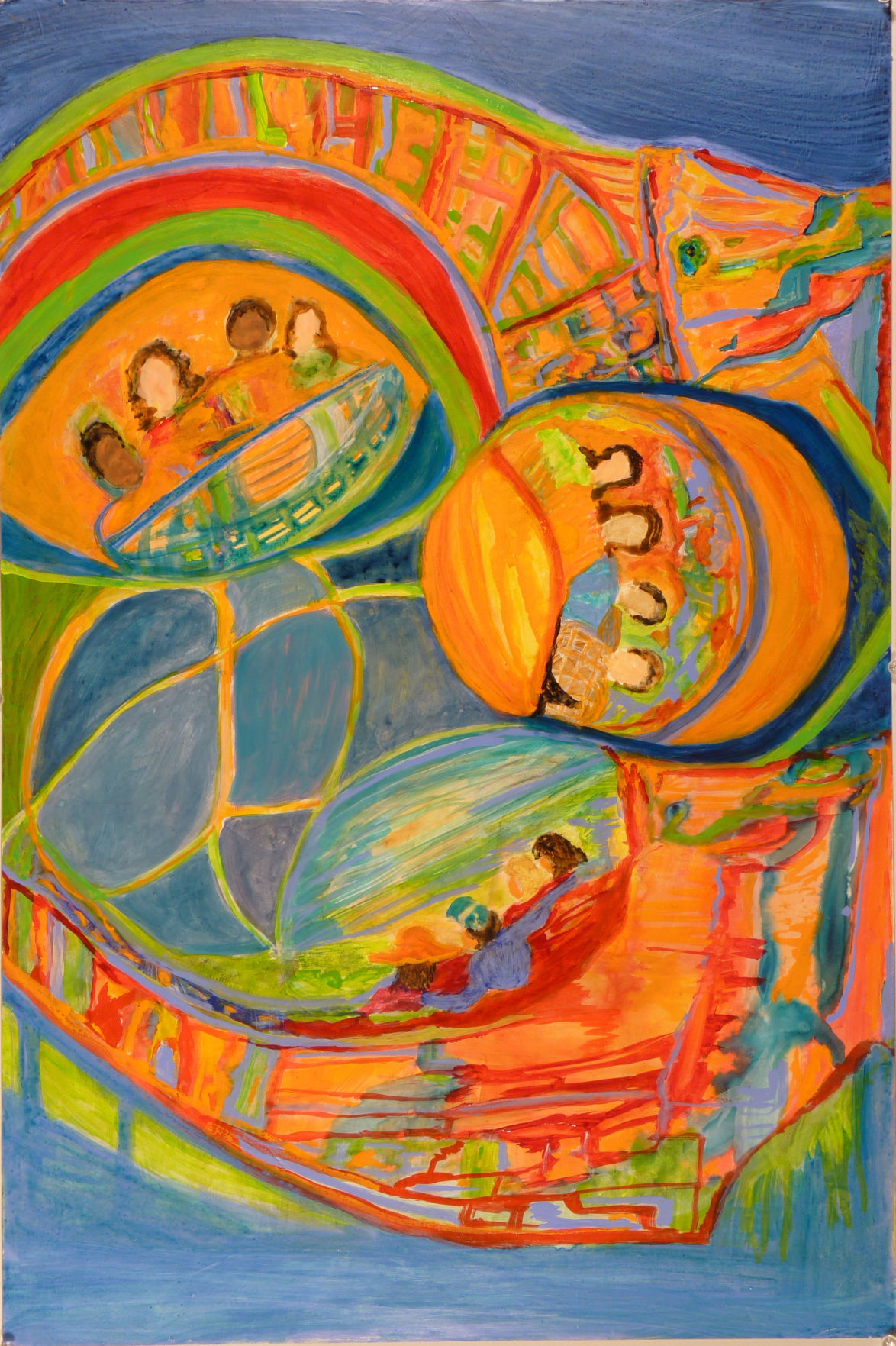 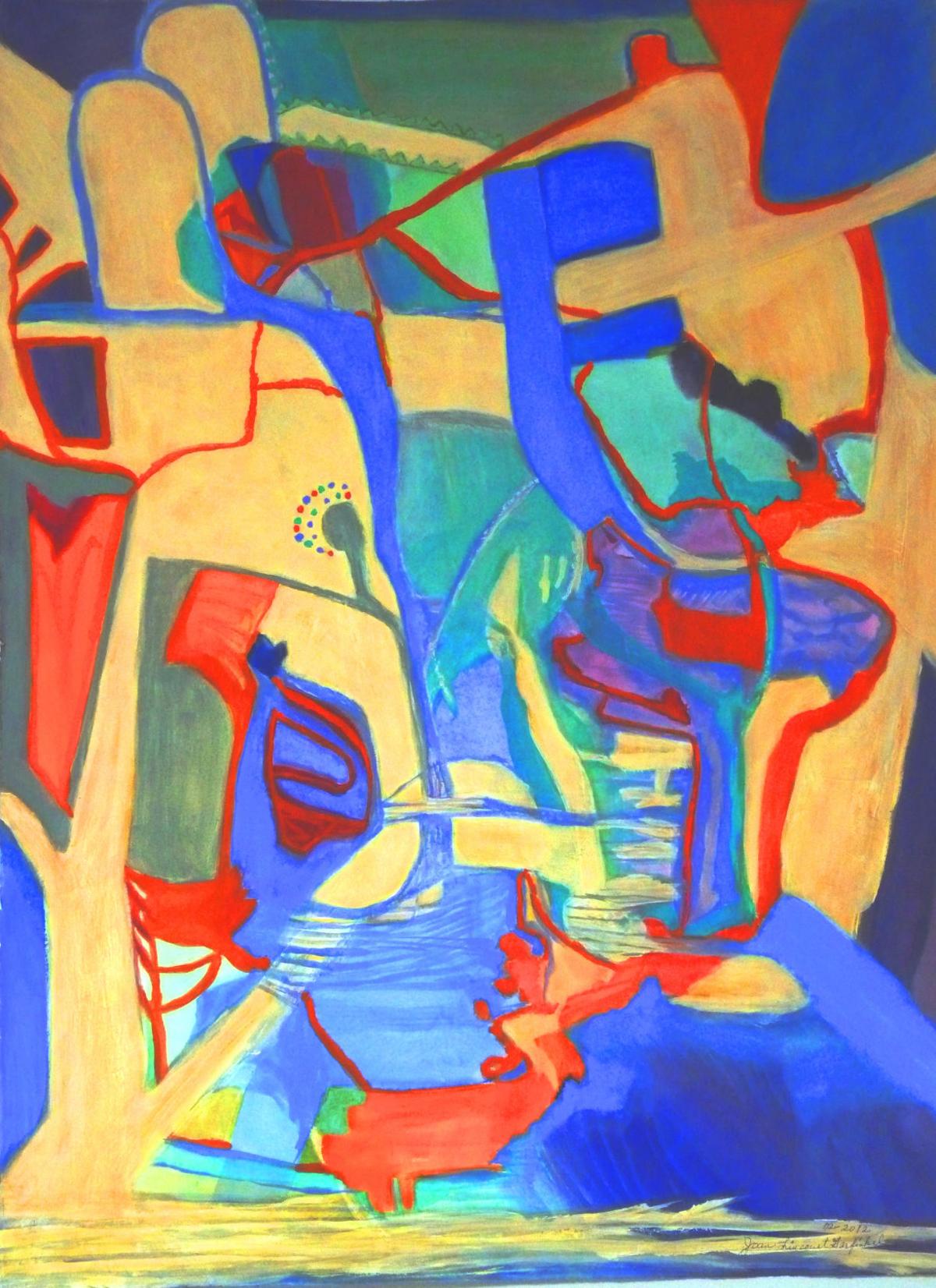 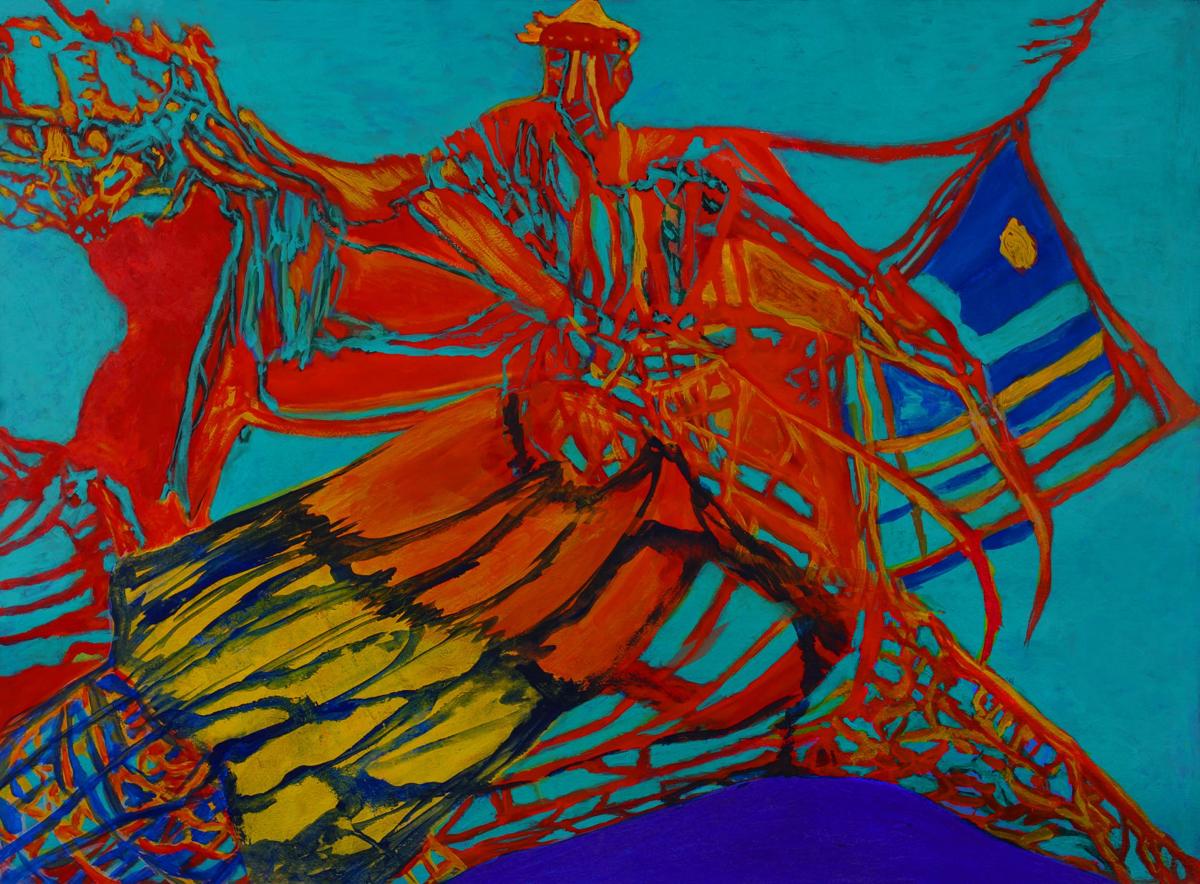 Pictured at left is Joan Garfinkel’s painting “Music Through the Spheres” and, at right, is “Quixotic Knight.”

Joan Garfinkel is pictured in her Narragansett home studio.

“Holocaust – Painted to the Music from Schindler’s List” was submitted by Joan Garfinkel for an international art show.

Studio location: 220 Boston Neck Road, Narragansett. I have a home studio in the kitchen and in the basement.

Current/upcoming exhibits: This past spring, I was one of the participants in the Artists’ Invitational and showed 10 pieces.

What is your background? My early background centered on voice lessons beginning at age 12 with babysitting money. There were many years of just singing to my family only. Now I have a grandson of 6 years old who’s already playing the guitar!

After having two children who were in school all day, I decided to return to Rhode Island College to major in theater and English. I studied Shakespeare and appeared in some productions at RIC, as well as some productions in Warwick Players and Academy Players in East Greenwich. While living in Warwick, I began taking watercolor classes with a local teacher, but felt Rhode Island School of Design would be more helpful, so I enrolled in all the core classes for interior design, taking on assignments that certainly made me feel more centered on art and on the process of making art.

Why create art? The most prominent teacher I studied watercolor with was William Lawrence who still teaches watercolor workshops in Maine and also in Maryland, where he lives, and who also, I believe, still teaches around the country. He was the person who asked us all in his Maine workshops: “Why Create Art?” He made all his students think about emotional content and to focus on what it is he or she would like to express “personally.” Many of his classes centered on how to make one’s work more personal and to “hold” to your intentions about the piece from beginning to end. After studying with Skip, I also enrolled in numerous workshops with other nationally known artists, some of whom taught at Spring Maid Beach Hotel in Myrtle Beach, South Carolina. Many of those workshops were about techniques that artists can and do use to help them make their work stand out by giving you a “vocabulary” of ways to express yourself.

What is Your Preferred Medium? Why? Although I painted in oils for a while because of courses that were offered locally at various art centers, I always gravitated back to watercolor or water media because there is less smell, less clean up mess, and it dries faster.

How would you describe your work? My work is mostly semi-abstract and abstract. For a long while I worked on figure drawing, as I believe it helps artists develop “seeing and drawing” skills much faster.

What was the inspiration for a recent body of work? Artists are always affected by the world around them and I believe that they are influenced by the times in which they are living just as previous artists’ works also spoke volumes about the times in which they lived. In some of my pieces, for instance “Carnival,” people of all colors sit side by side enjoying the ride. In another, “Windy Day in Boston,” a woman (dressed up to the nines) is carrying a bouquet of flowers, trying to hold on to her hat because of the wind with her other hand which has a cigarette in it. When I saw this woman, I had no sketch pad with me; so, I went back to our hotel room and sketched it from memory. It’s designed to make folks think a little about the connection between wind and breath, “or possible loss thereof.” Parts of the painting are done semi-abstractly and the figure part is done more realistically. It really depends what I am trying to convey. I also enjoy the South Western part of our vast country and have made some pieces which I called “To Love the South West.”

Whose work do you admire? Why? The earliest study of Cezanne was from a book by Earle Loran, who took photographs of Cezanne’s works and explained all the “whys” for Cezanne’s choices. Why not study the man who is also known as being the Father of Modern Art? He painted Mont Sante-Victoire so many times that each time he painted it the subject became more abstracted. He used patches of color, and if he felt something needed to be moved or removed for artistic enhancement he did so. He also made us view objects from many different perspectives, thus laying the foundation for Cubism. Another favorite painter of mine is Kandinsky because he wrote “Concerning the Spiritual in Art” and “Point, Line and Plane,” which give more insights to painters beginning to trust their intuitive powers concerning their subject matter. Lastly, one of the best teachers I wish I could have studied with personally is Hans Hoffman (1880-1966), one of the most important figures of postwar American art, for both his own abstract paintings and his influence as the legendary teacher of generations of artists in Germany, New York and Provincetown. His presence in New York, a link to Wassily Kandinsky, the Cubists, and the Fauves, catalyzed the movement known as Abstract Expressionism which finally placed America on the world map concerning contemporary art today.

If you could experiment in another medium, what would it be? Why? Stained glass, because of its color, form, and spirituality such as was seen in Chagall’s work; however, I do not think I would like working in the glass medium, cutting myself constantly, nor do I like the idea of working with lead, a product toxic to humans and the environment.

What do you do when you’re not making art? Meditate, walk, read, sing, practice moderate yoga for arthritis. I am also a 500-hour registered yoga teacher.

What is your dream project? Painting huge abstracts, but I do not have the proper space for it.

What are you most proud of? Why? One day when I was reading “Art News” magazine I noticed a call for entries in an international show called “Bold Expressions” in Sacramento, California, in 2015. I debated whether a piece I had finished in August 2013 might have a chance of being noticed.

The title of the painting was “Holocaust, Painted to the Music from Schindler’s List.” I decided to “GO FOR IT!”It was accepted!!! I feel my love of music helped me to “feel into” each choice I made for this piece.

Do you have a favorite local art spot? Yes, South County Art Supply, as most times I do not like waiting for art materials or traveling to the opposite end of Rhode Island for art supplies. It makes me very sad that it is up for sale!!! We really need an art supply center down here and I hope Andrea Peitsch can find a buyer. I am tired of big business draining every business locally!!

What advice would you give to aspiring artists? Study music, theater, liberal arts, and art history. Study the works of artists such as Ben Shahn, who wrote “Form and Content.” Study books from your local library, for example, “American Painting” by Goddard. Visit art museums and some of the traveling shows which come to Boston or New York. Study the masters as each artist has left us all legacies of works. Keep your old work and keep comparing your own work’s growth.

Do not hesitate to enter shows, as I almost did. Art can be arbitrary at times with judges not accepting your work, but remember that can be the result of just one person’s opinion! You must also ultimately keep working, studying, and most importantly, BELIEVE IN YOURSELF!

Have you or a loved one been laid off from work due to the coronavirus pandemic?