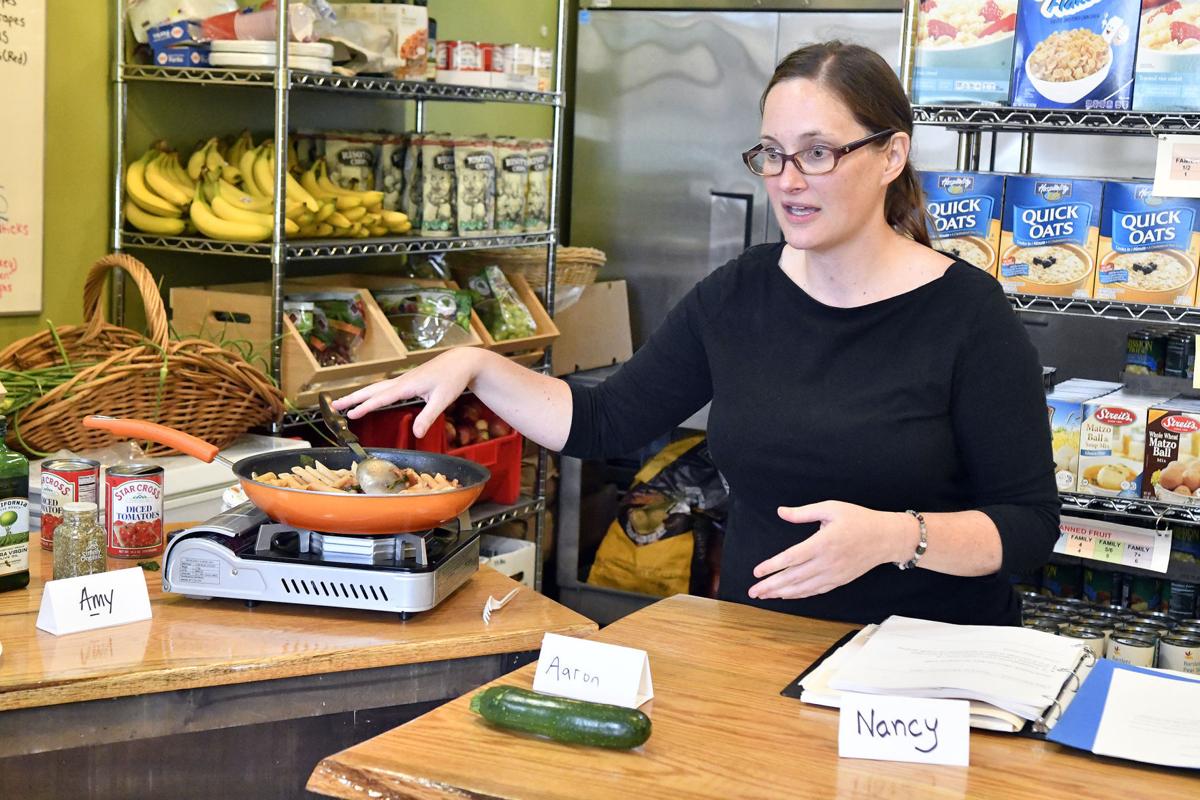 Amy Moore leads a “Food is Medicine” cooking class at the Jonnycake Center of Peace Dale’s Food Pantry on July 6. She is a doctoral student in nutrition at the University of Rhode Island. 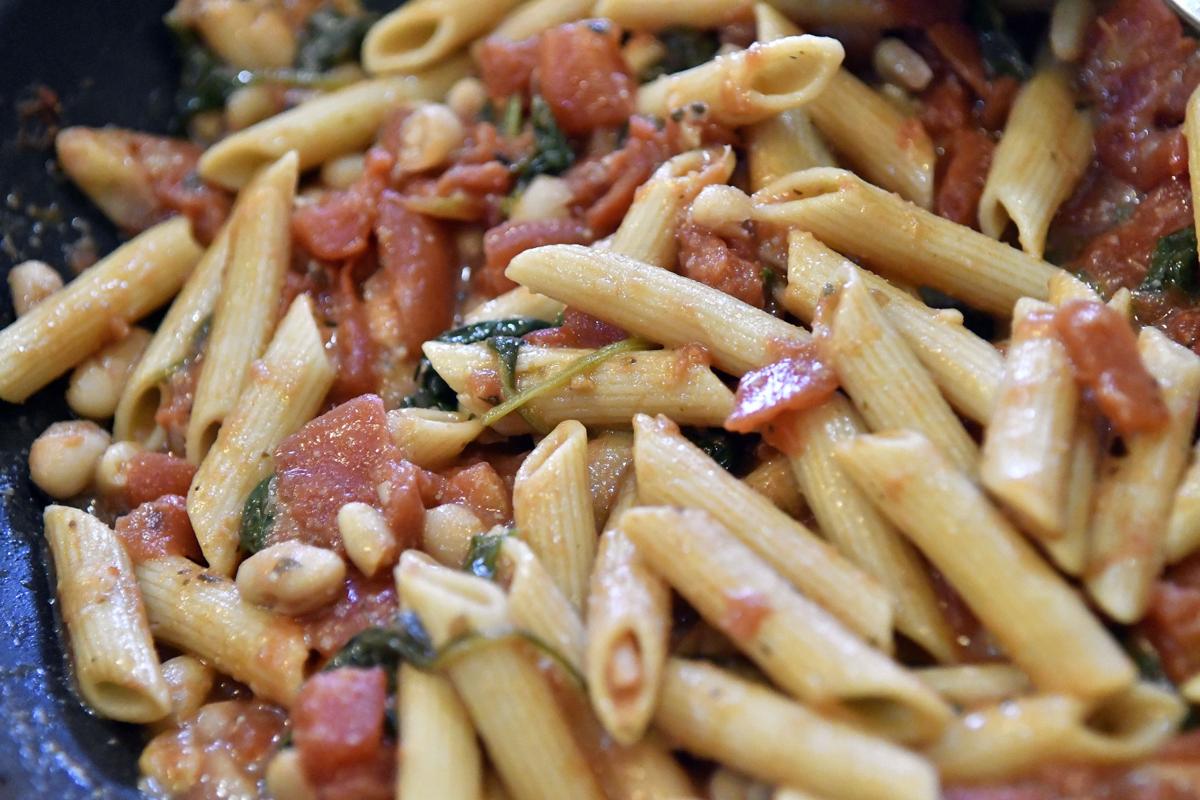 Amy Moore made this spinach, bean, diced tomato and pasta dish for the “Food is Medicine” cooking class at the Jonnycake Center of Peace Dale’s Food Pantry on July 6. The class is instructing visitors on easy, affordable ways to eat a plant-based diet and cook with extra virgin olive oil. 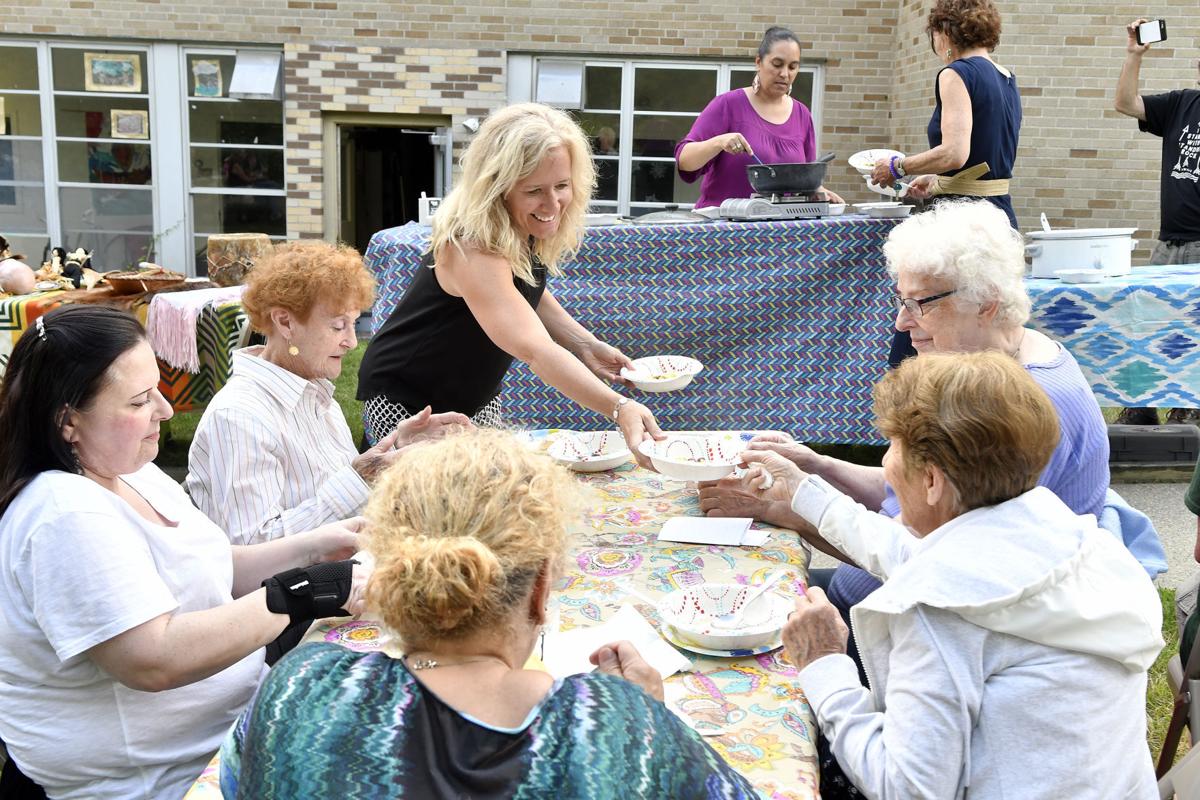 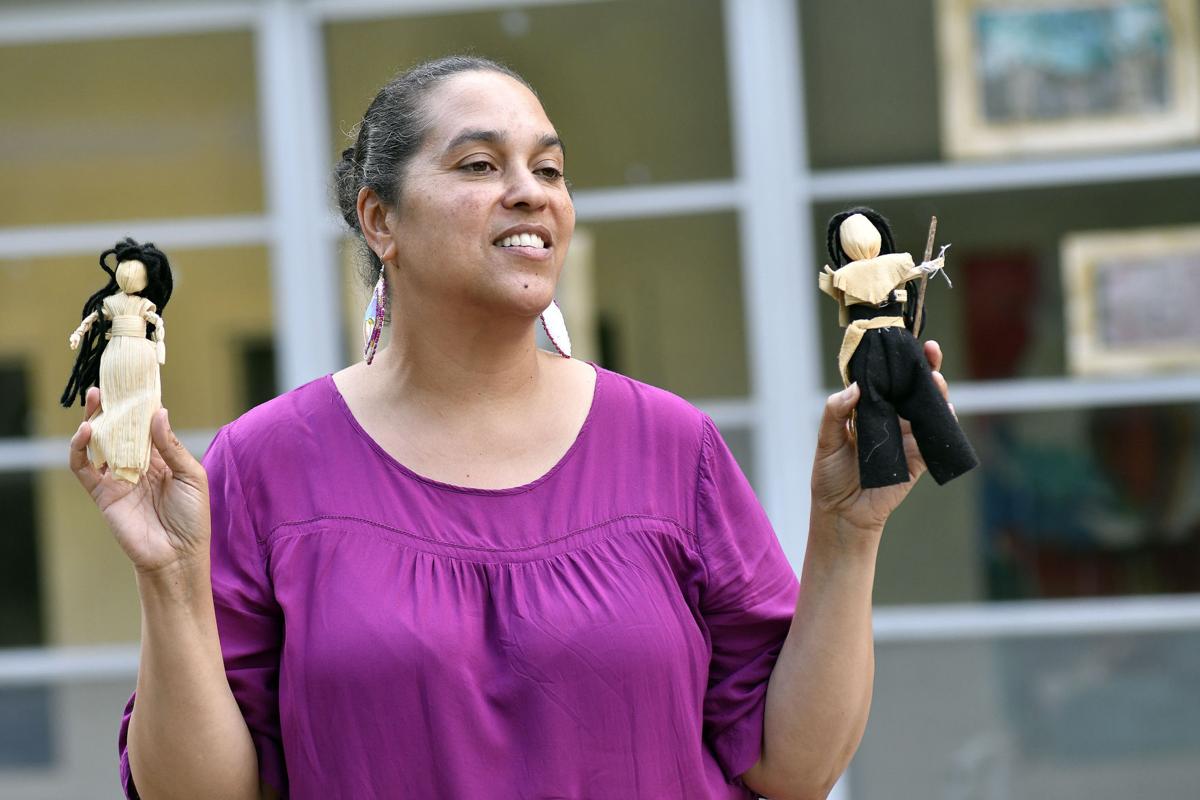 Loren Spears, executive director of the Tomaquag Museum in Exeter, talks about corn husk dolls as examples of how Native Americans found uses for the non-edible parts of the crops and animals they harvested and hunted for food during a “Nutritious Native Dishes” class on July 6 at Unitarian Universalist Church in Peace Dale.

Amy Moore leads a “Food is Medicine” cooking class at the Jonnycake Center of Peace Dale’s Food Pantry on July 6. She is a doctoral student in nutrition at the University of Rhode Island.

Amy Moore made this spinach, bean, diced tomato and pasta dish for the “Food is Medicine” cooking class at the Jonnycake Center of Peace Dale’s Food Pantry on July 6. The class is instructing visitors on easy, affordable ways to eat a plant-based diet and cook with extra virgin olive oil.

Loren Spears, executive director of the Tomaquag Museum in Exeter, talks about corn husk dolls as examples of how Native Americans found uses for the non-edible parts of the crops and animals they harvested and hunted for food during a “Nutritious Native Dishes” class on July 6 at Unitarian Universalist Church in Peace Dale.

In a makeshift kitchen, Amy Moore heated extra virgin olive oil in a pan, adding in garlic, herbs and spices. Within seconds, the room smelled delicious. She added in cannellini beans, spinach, diced tomatoes and pre-cooked whole wheat pasta, and within 20 minutes had prepared an easy, healthy, vegetable-based meal for five.

Moore happened to be preparing this meal in the same place where she sourced all of its ingredients – the food pantry at the Jonnycake Center of Peace Dale. And she was cooking for a small audience, all visitors to the pantry who had heard about a Food Is Medicine cooking class and wanted to check it out.

The class, held July 6, was the first in a four-week series that will focus on creating plant-based meals using extra virgin olive oil, or EVOO. Moore, a doctoral student in nutrition at the University of Rhode Island, follows guidelines set by Mary Flynn, a nutritionist and professor at Brown University who created the Food Is Medicine program as way to provide basic nutrition education and inform health care providers on the uses of food as medicine.

A main tenent of this program is using EVOO, and a section on the Food Is Medicine website explains that, “People with diets including daily consumption [of] extra virgin olive oil have lower rates of most chronic diseases, such as heart disease, cancers, arthritis, and type 2 diabetes. EVOO has been shown to decrease a number of risk factors for chronic diseases.”

At the Jonnycake Center class, which fit five participants comfortably and is intended for regular visitors, those gathered not only watched Moore’s demonstration and then had a serving each, but also received cooking tips (heat EVOO on medium-low; rinse and drain canned beans) and nutrition information (spinach is more nutritious when cooked), and even left with a reusable bag filled with ingredients to make the dish at home. In addition to the ingredients Moore used – EVOO, spinach, canned cannellini beans, canned diced tomatoes – fresh oregano, zucchini and garlic scapes were added, along with a gift card to Stop & Shop. Moore also told those gathered that they can easily substitute other ingredients to the dish, such as mushrooms, zucchini, sundried tomatoes and kale.

“Everything you need to make what we ate tonight is in this bag, and I challenge you to try it,” Moore said to the group before everyone departed.

The idea behind a plant-based diet is that people will spend less money on meats, which are more expensive, and eat more vegetables, which offer greater nutritional value. It “creates greater food security while enhancing a healthier diet,” said David Olguin, who was helping Moore behind the scenes.

The class, he added, shows community members that it’s “not so overwhelming to cook a meal like that.”

“You’re not sacrificing by eating this way,” said another woman in the class. “It’s a mindset.”

AROUND THE CORNER at the Unitarian Universalist Church, Loren Spears was cooking from another makeshift kitchen, this one set up outdoors. About 25 people looked on as Spears prepared Narragansett succotash, mixing corn, squash and shelled beans together, with some onions and herbs. It was her second batch of the night; the first had come from her crockpot, where it had been simmering all day, and made slightly differently with creamed corn.

As the succotash was passed around, murmurs of delight could be heard from those in attendance, all of whom seemed to agree the fresh batch was better.

Spears, executive director of Tomaquag Museum in Exeter, was leading her second class in a three-part series highlighting native cooking. The class is held in partnership with the Jonnycake Center and Thundermist Health Center. The third and final class will be held this evening at the church from 5:30-7:30, and feature quahog chowder; the first class was held June 29 and featured jonnycakes and different native toppings, like strawberries and turkey chili.

At the beginning of the class, Spears shared the story of how corn and beans came to the Narragansetts, which was by a crow from the southwest as a gift from the Creator. Originally, the Narragansetts were an agrarian people, she said.

Spears also talked about the Three Sisters planting method, which includes planting corn, then planting the beans so they grow up and around the strong corn stalks, and planting squash around the beans and corn, which grows low and gives nitrogen back to the soil and also, because of its big leaves, shades the soil, which enables it to retain moisture. This relationship, she said, is a symbiotic one.

“We know from plants how we should live symbiotically,” she told those gathered.

“We know who we are, what we were doing, and where we have been. I don’t need an archaeologist to tell me that,” she said. “Just because it’s an oral history doesn’t mean it’s not true.”

Spears also talked about how native ways of preparing food have become part of Rhode Island and New England culture, and said that learning and sharing from each other is a good thing (although she does take issue with Rhode Island clam chowder not instead being called Narragansett clam chowder).

The native cooking classes, she said, allow members of the public to come and learn about indigenous traditions, and experience them first-hand. People can interact, and ask questions, she said, which is important.

“Even if you’ve had succotash your whole life, you don’t necessarily know all about the community and culture behind it,” she said.

Rachel Sayet, a Mohegan, has been leading native food discussions in Connecticut, and traveled to Peace Dale for the class with one of her tribal elders. She said she has learned a lot from Spears, and that they’re both “trying to revitalize Native American food.” She said the Mohegans have a different language than the Narragansetts, but share similar foods.

John Gonzalez of Wakefield was in attendance live streaming the session. Of Taino descent, he believes “raising indigenous awareness is about people getting in touch with our culture.

“Our memories have been wiped out by colonization,” he said.

The partnership behind the class stemmed from the Indigenous Empowerment Network, which aims to eradicate poverty among indigenous people, who are still the most impoverished group in Rhode Island, Spears said. There are 35 partners in this network, including the Jonnycake Center and the Thundermist center.

Kate Brewster, executive director of the Jonnycake Center, said that one in five people who come to the pantry are native, which led to the creation of the cooking series as a way to engage those visitors and also share the Narragansett culture and way of cooking.