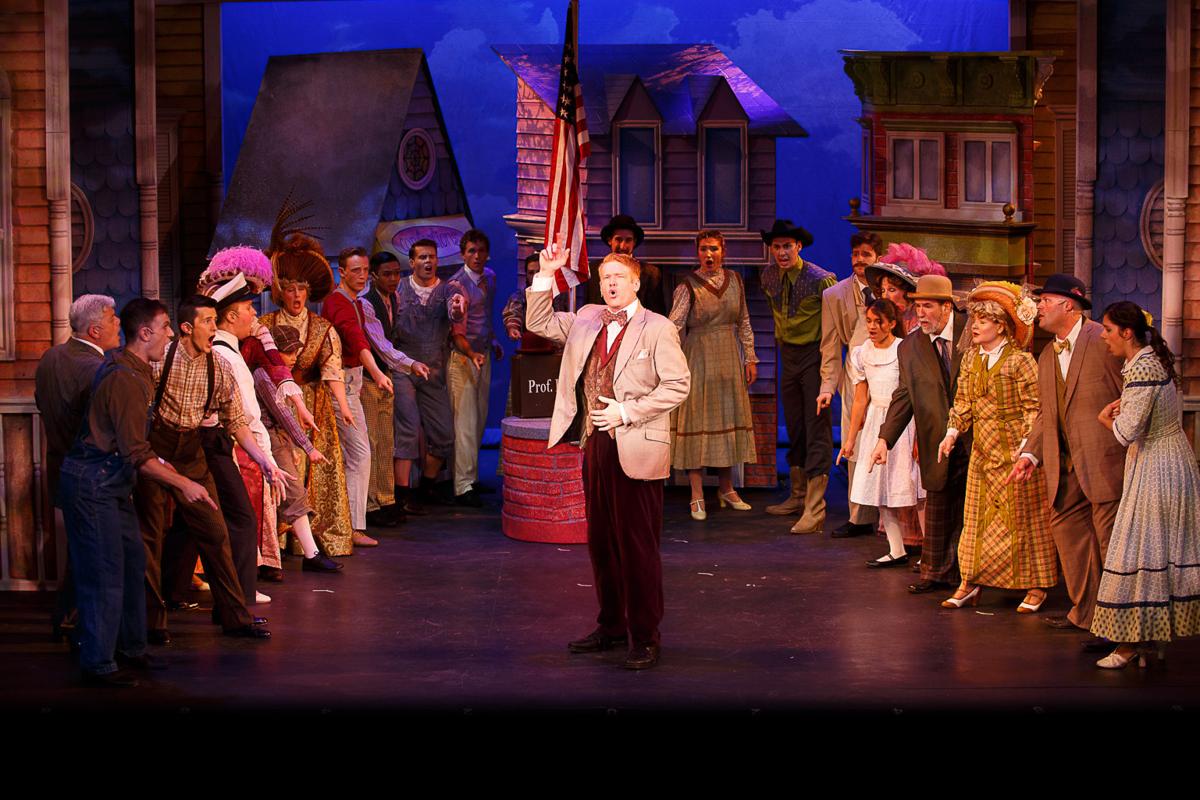 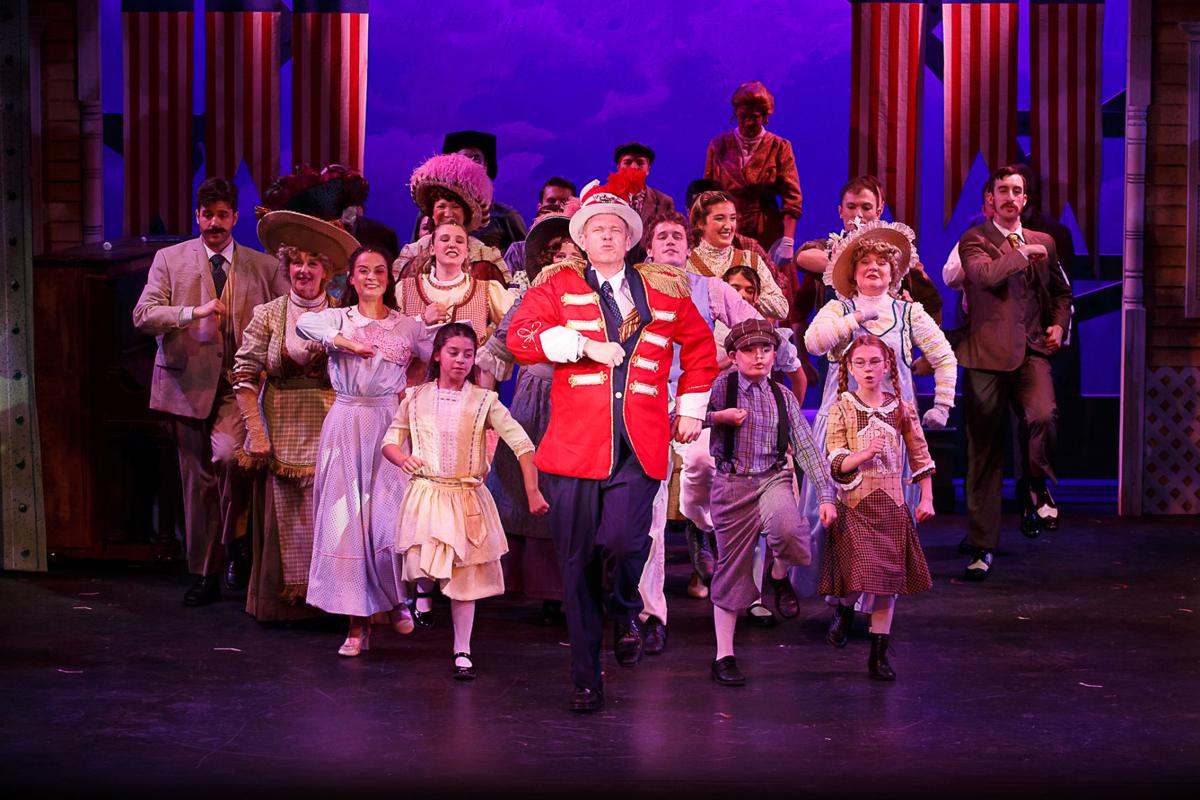 Bill Hanney’s Theatre By The Sea steams into summer, bringing to life Meredith Willson’s classic “The Music Man.” This show is tailor-made for the season, fitting somewhere between apple pie and corn on the cob at a Fourth of July fireworks spectacular. Directed and choreographed by Richard Sabellico, the cast and crew of Matunuck’s historic barn theater have created an energetic rendition of the beloved musical that originated on Broadway in 1957 and was popularized in the well-known 1962 film starring Richard Preston.

Theater By The Sea’s stage is jam packed with talent offering a familiar and faithful version of the infamous story of Harold Hill, the bare faced, double shuffle, two bit, thimble rigger con artist who rolls into River City station one hot Iowa summer. Hill is intent on swindling the small-town simpletons by turning them against the new pool table at the local billiard hall – a problem that can, of course, only be solved by forming a boys band with instruments supplied by the swindling salesman himself. Along the way, Hill must seduce the only person in River City smart enough to see through his scam – librarian and music teacher Marian Paroo. Willson’s musical is both a gentle satire and a loving tribute to the old-fashioned Main Street America of days gone by.

Theater By The Sea’s production is respectful of the original smash hit, presenting a slice of red, white and blue Americana just in time for the Fourth. This is cheery and upbeat entertainment replete with dazzling costumes and an agile set design that wrings every inch of out of the barn’s small stage. Befitting the title, the show thrives on infectious music and Sabellico’s inventive choreography, which goes leaps and bounds beyond tried-and-true square dance numbers – especially during “Shipoopi,” an extended dance hootenanny, which nearly pops off of the stage.

The show has oodles of fun with Willson’s most iconic tunes, starting with a jolting and jostling take on “Rock Island” that sets the tone for many more peppy and crowd-pleasing numbers to come. Perhaps it is due to the show’s heavy dose of wide eyed, middle America corniness, but I’ve always felt that Willson’s musical is a bit underrated compared to other titans of the the Golden Age of Broadway. But there’s hardly a stronger opening run of songs than “Rock Island,” “Iowa Stubborn,” the brilliant “Trouble,” “Piano Lesson,” and the counterpoint from “Goodnight, My Someone” to the show’s signature number “Seventy-Six Trombones.”

While the show soon drifts and meanders into its romance plot, this is one of the most electrifying opening salvos in musical theater. Musical director and conductor Eddie Guttman leads the live seven-piece band through Willson’s appealing score, in which voices fill out the orchestra, from the chugging trains of “Rock City,” to the brassy and bouncy “Seventy-Six Trombones” and the sounds of chirping hens in “Pickalittle.”

Willson’s resourceful lyrics and playful book are in fine hands with this strong cast, which often assembles over 20 performers on stage at once. There are many standouts among them. Jason Ostrowski endows the anti-hero Harold Hill with enough fast-talking charisma and Midwestern charm to distract from the character’s underlying creepiness. Ostrowski is at his best leading the spirited ensemble numbers with gusto and, when given an opportunity, showcases a booming baritone, peaking during “Till There Was You,” Hill’s duet with Marian. The lovely Tiffan Borelli tackles the role of the librarian and piano teacher Marian Paroo with grace and aplomb. With acting chops to match her gorgeous soprano, Borelli fights her way out of the two-dimensional trap that the play has laid for her. Borelli’s Marian is clearly not only independent and smart, but patiently resistant to Hill’s sleazy come-ons. Borelli infuses the character with wit and sensitivity, not to mention an enchanting voice that stops the show during the wistful ballad, “My White Night.”

Audiences will be tickled by the number of supporting comic players, most notably crowd-favorite Tom Gleadow in the role of River City’s bumbling Mayor Shinn. Not to be outdone is Lorinda Lisitza as the mayor’s wife, Eulalie Mac-Kecknie Shinn, who earnestly leads the Ladies Auxiliary in delightfully ridiculous dance routines. The amiable Michael Perrie Jr., who stole some scenes in last year’s “Buddy Holly,” stands out here as Hill’s sidekick, Marcellus. Perrie’s boisterous ad-lib when his banjo strap broke (“We’re going strapless!”) was a hit with the opening night audience. Another Theater By The Sea crowd favorite, Maria Day, is sharp and funny as Marian’s mother, the brassy Irish Mrs. Paroo. “The Music Man” also features a couple of scene stealing moments from little Amaryllis (Bobbie Celine Doherty) and Winthrop Paroo (Patrick Conaway), who adorably lisps his way through the Act I closing showstopper “Wells Fargo Wagon.” Finally, for a musical chock-full of treats, the show’s finely tuned barbershop quartet really takes the cake, especially with local radio host Mike Maino thrumming the bass notes.

This good-natured production brims with so much infectious good times, it will prove nearly irresistible even to cynics and more urbane theater goers. Nonetheless, the play’s creepy romance plotline – which has Harold following Marian home at night, and forcing himself on her in the library – is a bit of 1950s style courtship that has not aged well. This patronizing “boys-will-be-boys” fun at Marian’s expense unfortunately spills over into several numbers, from “Marian The Librarian,” to “The Sadder-But-Wiser Girl” and “Shipoopi” (“the girl that’s hard to get”). Director Sabellico is clearly unconcerned with fishing out any contemporary subtleties, opting to respect the original as a time capsule and hope for the best. The opening night audience seemed to accept this as an anachronism of ’50s-era musical theater and rewarded the production with a thundering standing ovation.

Indeed, Theatre By The Sea’s production emphasizes all there is to enjoy about this musical, particularly the love of music and the power of imagination. After all, this show concludes with a compelling plea for the transformative power of music to change people’s lives. In that spirit, audiences should know that, during the run of “The Music Man,” Theatre By The Sea is calling for donations of old musical instruments to benefit the Rhode Island Rhythm and Blues Preservation Society’s Instruments for Children Scholarship Program.

For more information about the show and ticket availability, visit theatrebythesea.com.