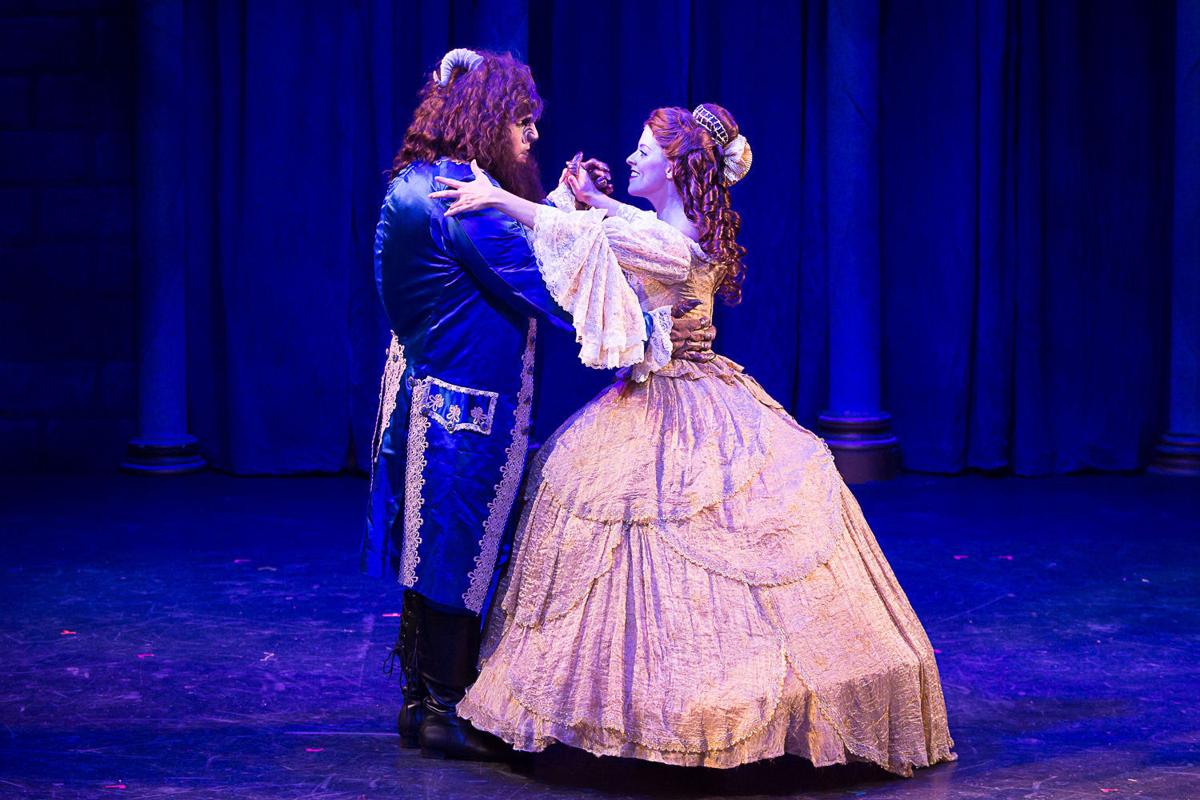 Philip Bryan is Beast and Lauren Weinberg is Belle in Theatre By The Sea’s production of “Disney’s Beauty and the Beast,” on stage through Aug. 12. 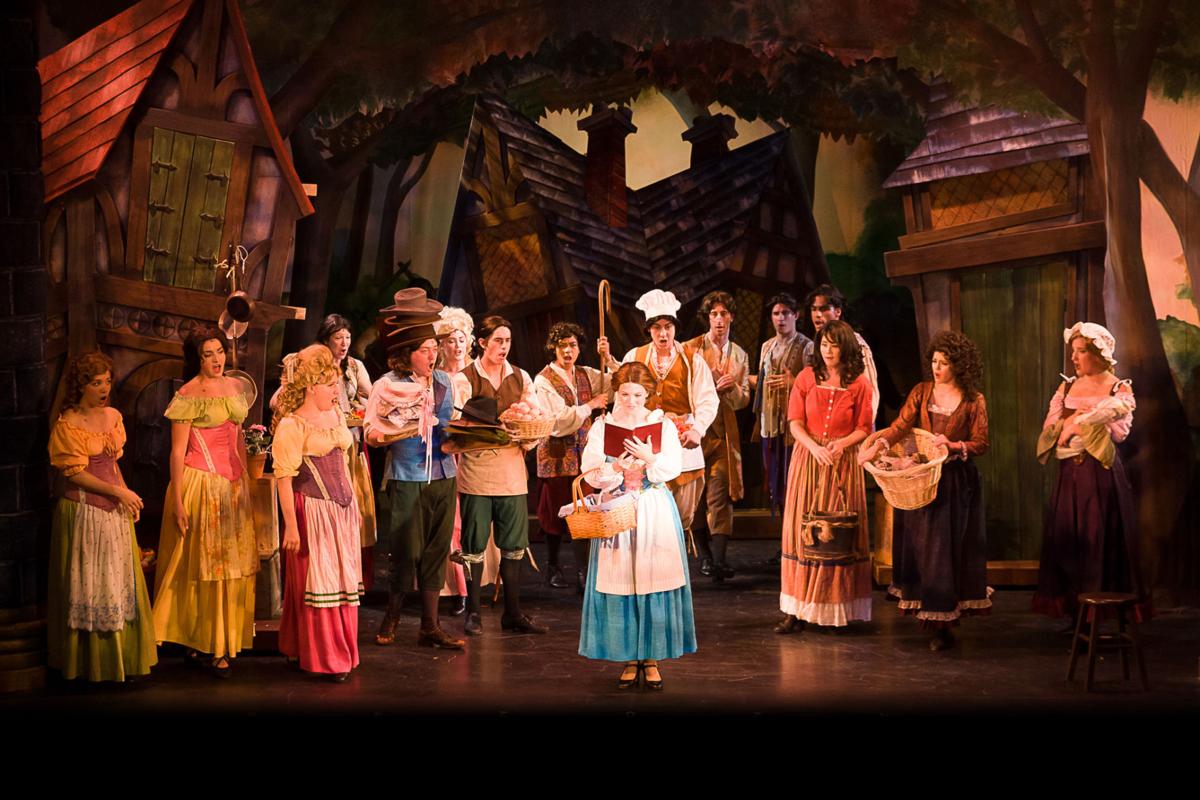 Lauren Weinberg is Belle, center, in Theatre By The Sea’s production of Disney’s “Beauty and the Beast,” on stage through Aug. 12.

Philip Bryan is Beast and Lauren Weinberg is Belle in Theatre By The Sea’s production of “Disney’s Beauty and the Beast,” on stage through Aug. 12.

Lauren Weinberg is Belle, center, in Theatre By The Sea’s production of Disney’s “Beauty and the Beast,” on stage through Aug. 12.

Theatre By The Sea puts an exclamation point on its successful 2017 season with its latest offering, a dazzling and magical “Beauty and the Beast.” Everything about this production is larger-than-life, from the special effects wizardry and fairy tale stage design, to the soaring music, booming voices, and high-kicking dance numbers.

Inside the walls of Matunuck’s venerable barn theater, Theatre By The Sea’s production transcends the animated version – and even the recent film – in a way that only enchanting stagecraft and live musical theater can.

The musical’s full title is, of course, “Disney’s Beauty and the Beast,” and the show has all the razzle-dazzle of a theme park spectacular. But where other Disney musical theater adaptations fall short, this show expands upon the cartoon universe with real cross-generational appeal.

A groundbreaking smash hit in 1994 when it opened as Disney’s first foray on Broadway, the musical became one of the longest-running shows in history. Reinventing the family musical for a new era, Disney’s massively successful venture likely changed Broadway forever, for better or worse, and introduced a whole new generation to musical theater.

For those familiar with only the animated version, the musical is several notches above the cartoon, featuring a reworked script by Linda Woolverton, which adds nuance, depth and character arcs to the familiar story, which allow the show to live and breathe in three dimensions.

The heart and soul of “Beauty and the Beast” is its music, featuring a score by the legendary Alan Menken, whose work on Broadway and with Disney has earned him 11 Grammys, eight Oscars, seven Golden Globes, and a Tony (a collection soon to be expanded if the recent live action film version of this musical is as well received during awards season as the 1991 cartoon). A whole generation of parents have had Menken’s ear worms stuck in their heads – from “Under the Sea” to “A Whole New World” and “Colors of the Wind.” Indeed, Menken has an uncanny knack for melody and rhythm that has in many ways defined popular music for our era.

His association with the Disney franchises may cause some to underestimate his talents, but “Beauty and the Beast” features all of Menken’s signature songwriting tricks at their finest, particularly the classic title song made famous by Angela Lansbury, and especially the rousing and lavish showstopper, “Be Our Guest.” This score features much of the ingenuity and cheekiness of his first musical hit, “Little Shop of Horrors,” before his songwriting became more smoothed out and formulaic in later efforts like “Tangled” or “Enchanted,” and owes much to lyrics by his greatest collaborator, Howard Ashman. After Ashman’s death in 1991, renowned lyricist Tim Rice worked with Menken to add new songs for the Broadway version.

Under the direction of Bob Richard, Theatre By The Sea’s version nearly bursts off of the stage. While paying tribute to fairy tale romanticism, this production finds inspiration in the French vaudevillian vibe, infusing the show with spectacular song and dance from curtain to curtain. It is the over-the-top production numbers that harken back to show business of the 1930s and ’40s, when Matunuck’s barn playhouse was an entertainment epicenter during summerstock’s golden age.

The old French village immediately springs to life during the opening number, “Belle.” The rowdy tavern song “Gaston” made me regret using the term “showstopper” for anything other than what this number accomplished – the beer cup clanking extravaganza was punctuated by cheers and applause and ended with an extended ovation that left the ensemble frozen on stage for nearly a minute.

The very definition of showstopper repeated itself a few minutes later at the Beast’s castle during the fabulous “Be Our Guest.” With a big assist from choreographer Diane Laurenson, Richard builds the show around these numbers, which serve as a contrast for several piercing solo ballads. This production confidently breaks for intermission not with a showstopper, but with the Beast’s power ballad, “If I Can’t Love Her,” ending the first act on a smoky and introspective note.

Theatre By The Sea fills this boisterous ensemble cast with memorable characters. Wayne Hu perfects Gaston’s transition from goofy comic cad to villainous demagogue and quickly becomes the show’s most magnetic stage presence. Hu’s bulging biceps were eclipsed only by his rich operatic voice, which added much to the character.

In the role of the Beast, Philip Bryan’s exquisitely smoky tenor offers a perfect counterpoint to Hu’s Gaston. Smoldering throughout the show, Bryan offers glimpses of the Beast’s inner turmoil and struggle to retain his humanity, but never shortchanges opportunities for comedy or romance.

Lauren Weinberg is a delight as one of Disney’s best heroines, Belle, whose character becomes the resting place for everything this show wants to say about imagination, sacrifice and love. Weinberg enjoys many compelling moments, but really shines during two of Menken’s most commanding ballads, “Home” and “A Change in Me,” which was added to the Broadway version.

In all cases, Theater By The Sea has cast versatile actors who can carry a tune, but are refreshingly unafraid to sacrifice a note here and there for dramatic – or comic – effect. The cast of supporting characters adds variety and fun along the way, including Ellen Peterson as Mrs. Potts, Jeffrey Johnson II as Cogsworth, and especially Josh Houghton’s Lumiere, who earned many laughs with his timing and charisma, as well as a comically exaggerated French accent.

Production elements for this musical extravaganza are well coordinated to make room for such a big show on a small stage. Some of the blocking would have amounted to little more than characters walking around in circles without the deft interplay of Kyle Dixon’s moving set pieces, Danny Erdberg’s sound effects, and especially Jose Santiago’s fluid and sensitive lighting design.

Costumer Miguel Angel Huidor and costume coordinator Paula Peasley-Ninestein pull out all the stops to dress the characters lavishly, with many breathtaking costume changes. The ballroom scene between Belle and the Beast, in particular, will assuredly catch the eye of Disney princess fans in the house.

With the show clocking in at nearly two and three-quarter hours, parents might want to consider matinee times for younger theatergoers. Fortunately, much of the action is packed into the longer first act, so my 6-year-old guest remained enchanted until the rousing standing ovation at the end.

She giggled at Gaston, cheered for the little teacup Chip, hid from the wolves in the forest, and gripped my hand tightly when the Beast was revealed, only to delight at Gaston’s demise, asking “did he really fall out a window?” It was a small moment that highlighted the magic of live theater and the power of the show’s top-notch special effects (which are literally high-flying).

This production isn’t just for the kids. Theatre By The Sea’s “Disney’s Beauty and the Beast” transforms the familiar “tale as old as time” into a fun-for-all ages romp full of wonder and spectacle. With a show that offers live musical entertainment that is “never second best,” Theatre By The Sea invites you to be their guest at the must-see hit of the summer – but get your tickets soon.