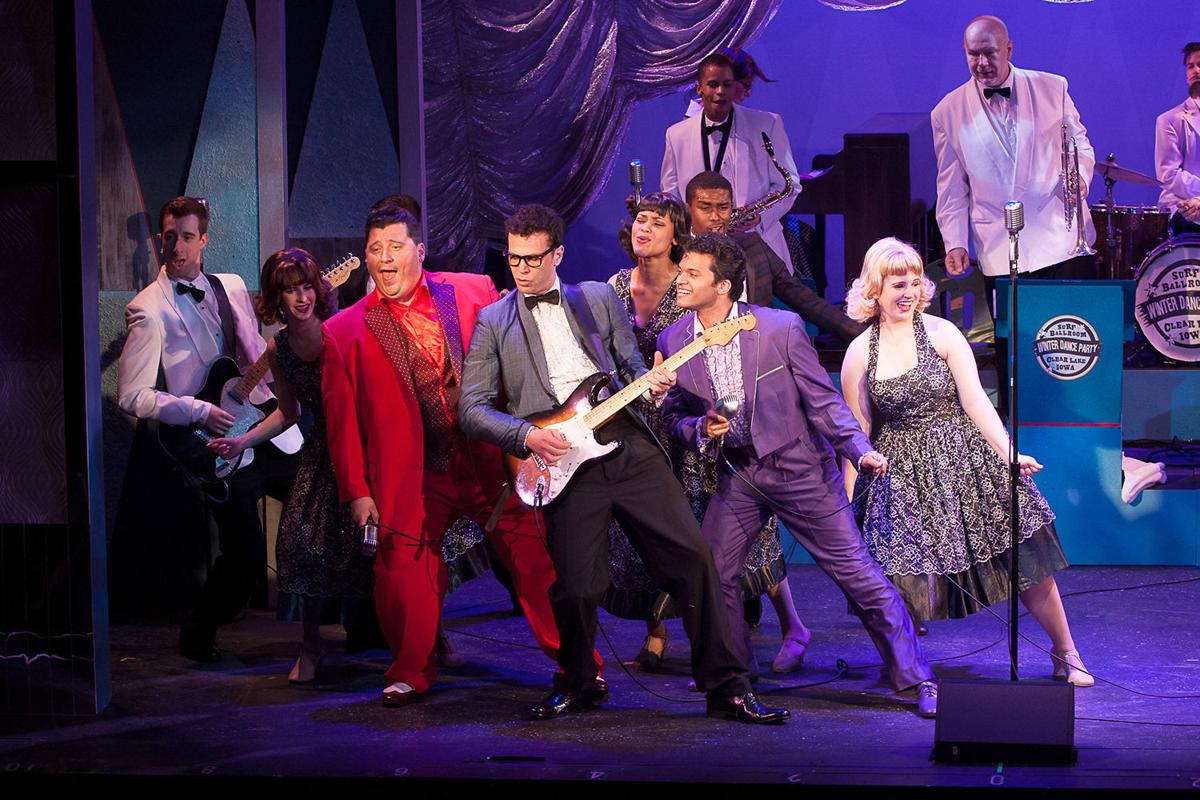 Michael Siktberg, center, is Buddy Holly, with Jean-Pierre Ferragamo, left, as The Big Bopper and Albert Jennings, right, as Ritchie Valens and the cast of “Buddy: The Buddy Holly Story” at Theatre By The Sea through June 19. 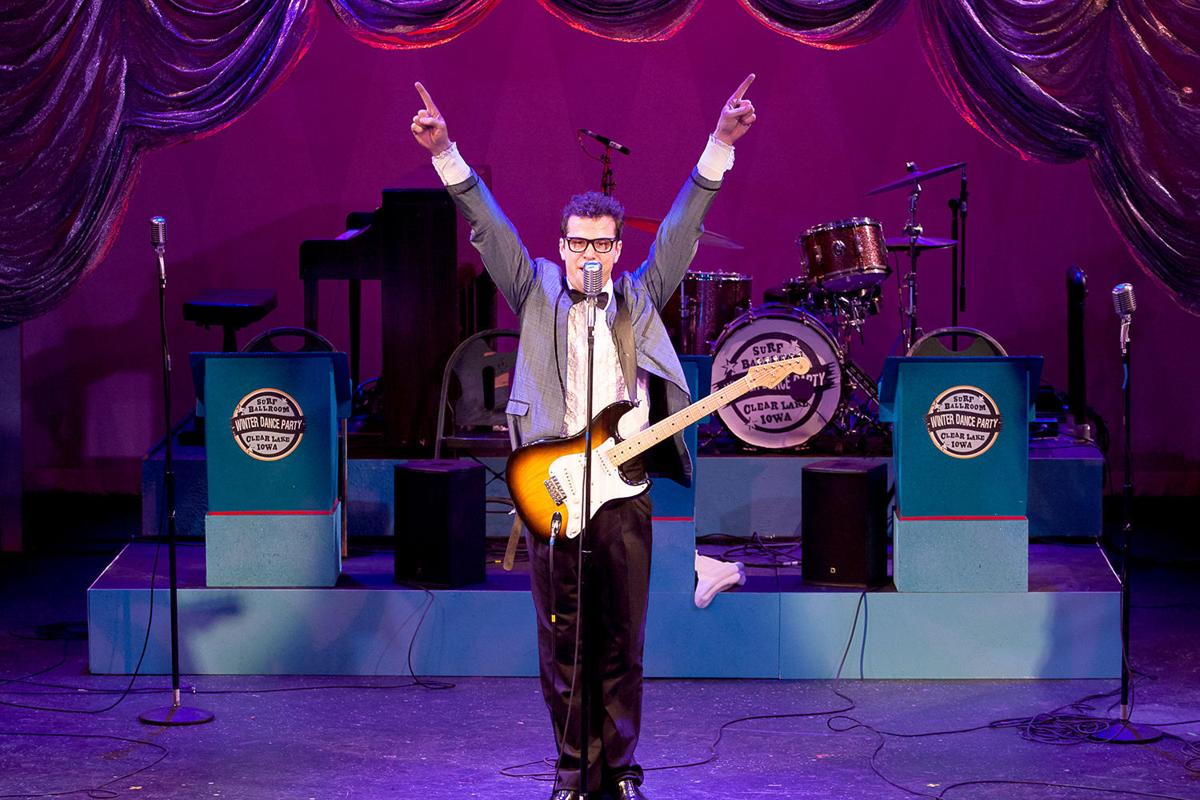 Michael Siktberg as Buddy Holly in ‘Buddy: The Buddy Holly Story’ at Theatre By The Sea thru June 19. 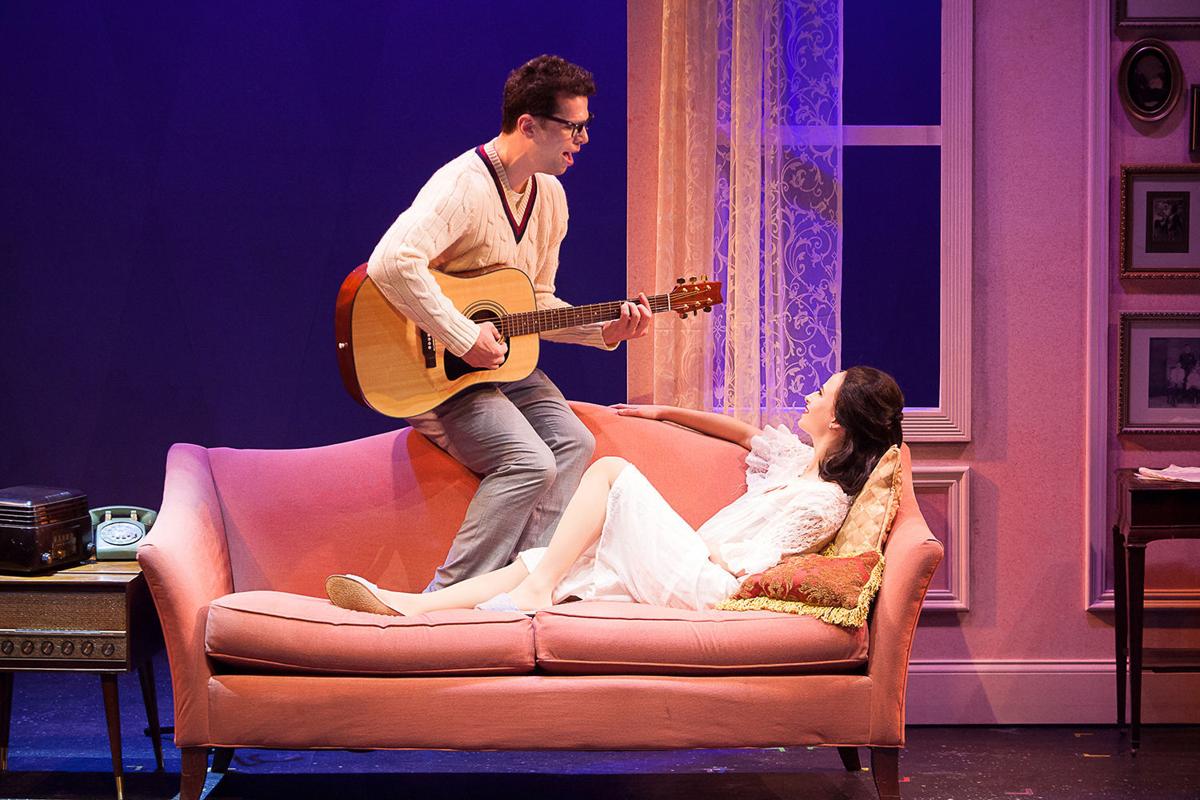 Michael Siktberg as Buddy Holly and Beatriz Maranjo as Maria Elena Holly in ‘Buddy: The Buddy Holly Story’ at Theatre By The Sea.

Michael Siktberg, center, is Buddy Holly, with Jean-Pierre Ferragamo, left, as The Big Bopper and Albert Jennings, right, as Ritchie Valens and the cast of “Buddy: The Buddy Holly Story” at Theatre By The Sea through June 19.

Michael Siktberg as Buddy Holly in ‘Buddy: The Buddy Holly Story’ at Theatre By The Sea thru June 19.

Michael Siktberg as Buddy Holly and Beatriz Maranjo as Maria Elena Holly in ‘Buddy: The Buddy Holly Story’ at Theatre By The Sea.

Theatre By The Sea took a gamble in opening its 2016 season with a bigger show than usual, “Buddy: The Buddy Holly Story,” and if the enthusiastic reaction from the opening night crowd is any indication, this production will be an early smash hit. On a cool and breezy evening in Matunuck, owner and producer Bill Hanney seemed a touch disappointed the theater’s new air conditioning system would not be needed. But things got white hot inside anyway and, by the end of the show, most of the spectators were on their feet, dancing and clapping along to the sounds of the rock ‘n’ roll era.

While nostalgia-steeped jukebox musicals are now something of a ritual for the venerable summer stock theater’s June opening, “Buddy” appears to be perfectly suited to the appreciative patrons for whom rock ‘n’ roll music of the 1950s formed the soundtrack of their youth. “Buddy” is a show that pays tribute to the meteoric rise and tragic end of Buddy Holly, an icon of 1950s rock ‘n’ roll. Written in 1988 by Alan Janes, this show has an advantage over standard jukebox musical fare in that there is a compelling narrative through-line tracing Holly’s brief but brilliant career. Set against a backdrop of explosive cultural change in which rock ‘n’ roll takes the billboard charts – and pop culture itself – by storm, “Buddy” brings to life Holly’s dramatic transformation from a provincial country and western singer-songwriter to international superstar.

The show, which clocks in around two and a half hours, is heavy on the music and proportionally light on theatrics. For this production, Theatre By The Sea leaves the orchestra pit empty and, instead, the cast of 16 performers play their own instruments. As a result, “Buddy” often takes on the vibe of a tribute concert. The plot culminates with extended recreations of two iconic performances, which close each of the show’s two acts. The climax of the first act memorializes Buddy Holly and the Crickets’ appearance at Harlem’s famed Apollo Theater, while the show’s second act tells the story of Holly’s final performance in Clear Lake, Iowa, immediately prior to his tragic death. Along the way, the audience is treated to Holly’s greatest hits, including “That’ll Be the Day,” “Peggy Sue,” and “Everyday.”

In the title role, Michael Siktberg brings Holly’s charisma and musical virtuosity to life. Providing more than just a trip down memory lane, Siktberg provides a youthful energy and irreverence that is fitting in tone to Holly’s musical legacy. By the end of the show, Siktberg leads the cast in extended stretches of no-holds-barred 1950s rock ‘n’ roll. A more than capable guitar player, Siktberg’s strong vocals are also showcased, particularly during Holly’s low tempo ballads, like “True Love Ways” and “Raining in My Heart.”

Siktberg is well supported (and occasionally upstaged) by a talented cast of singers and musicians. Seth Eliser keeps the beat with outstanding drumming as the Crickets’ Jerry Allison, and Sam Sherwood and Michael Perrie Jr. provide great guitar and bass lines in the roles of bandmates Joe B. Maudlin and Tommy Allsup. The concert sequences provide some showstopping cameo moments as well. Opening the Apollo Theater scene, Shayla Simmons raises the rafters in the old barn theater with a jaw-dropping rendition of “Shout” and nearly runs away with the show. In the second act, audience favorite Jean-Pierre Ferragamo gets the house rocking and rolling with a larger than life version of The Big Bopper’s “Chantilly Lace,” while Albert Jennings’ pelvic gyrations cause whiplash in the front rows during Ritchie Valens’ “La Bamba.”

The concert scenes give the cast ample opportunity to engage the crowd with some of the theater’s signature interactive moments. While most of this shtick is a hit with the audience, it occasionally misses the mark. During the recreation of Buddy Holly and the Crickets’ legendary set at Harlem’s Apollo Theater, the Matunuck crowd is encouraged to assume the role of a skeptical African American audience. This uncomfortable sour note highlights a flaw in the musical’s schlocky book, written by Alan Janes in 1988, which attempts to add depth and conflict to the plot by introducing topics of race, but then undermines itself by playing them for comic relief. Holly’s interracial marriage to María Elena Santiago, for instance, becomes cheap comic fodder during the second act. For most in the audience, however, these potentially cringe-worthy moments seemed to fly under the radar. The show gets a bit more narrative mileage out of the music business subplots, exploring the familiar trope about the artist who wants to play his own music over the objection of record producers. While the dated book will likely strike some musical theater fans as kitschy compared to fresher biographical jukebox musicals like “Jersey Boys,” the main purpose of the dialogue is to create an excuse for the rock ‘n’ roll, which is where this production really shines.

The show takes a sentimental turn in the second act, providing an emotional buildup to the “day the music died.” Holly’s pregnant wife and her dark premonitions are highlighted in multiple scenes leading up to the finale, the final concert at the Surf Ballroom in Clear Lake, Iowa, alongside Valens and the Big Bopper on their star-crossed Winter Dance Party Tour. Once the concert gets going, it is a rock ‘n’ roll party through and through, with an energetic run of late 1950s hit songs including “Peggy Sue Got Married,” “Rave On!” and even Chuck Berry’s “Johnny B. Goode.”

There is a lot to like about this fun, upbeat show. A wistful and sincere musical tribute to a beloved musical pioneer, Theatre By The Sea’s “Buddy” is at its best when it lets the music do the talking. Judging by the exuberant response from the opening night audience, this is a show that is tailor-made for Boomer types with affectionate memories of the early rock ‘n’ roll era, but also for music lovers who appreciate Holly’s historic impact on rock music. If this sounds like you, get your tickets soon as they are selling out fast.