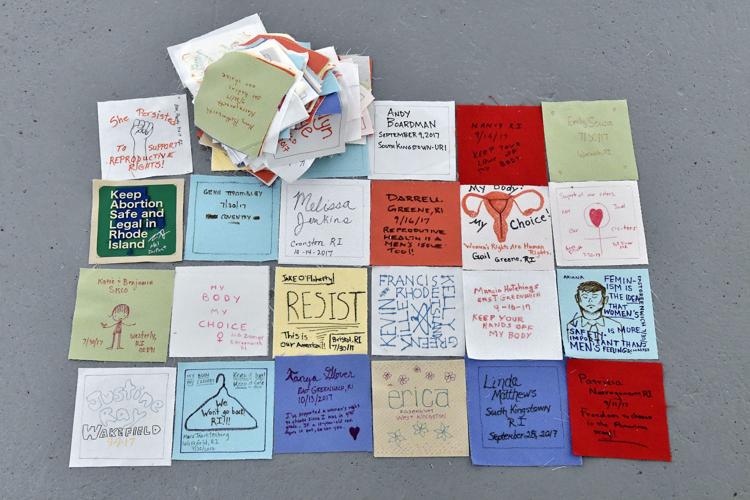 Fabric squares containing messages from supporters of women’s reproductive rights were to be sewn into a quilt for The Woman Project’s ‘Project 2.0’ during a Sewing Bee held last week. 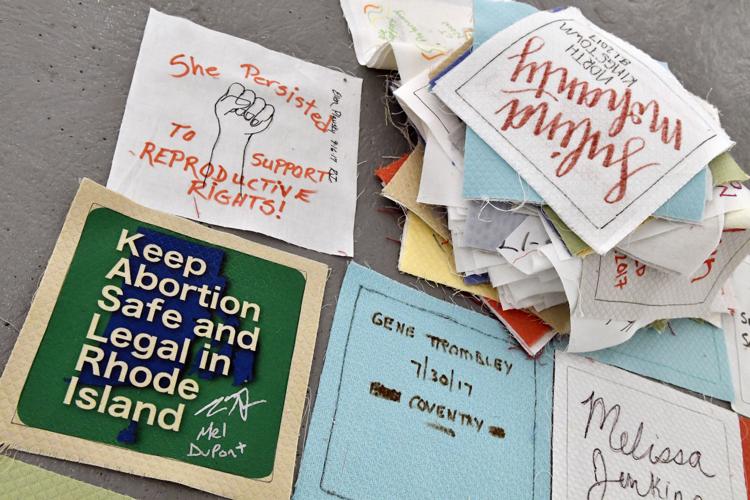 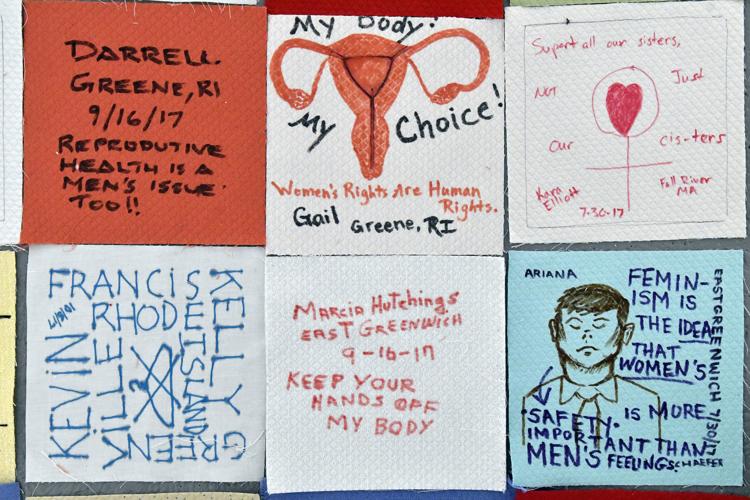 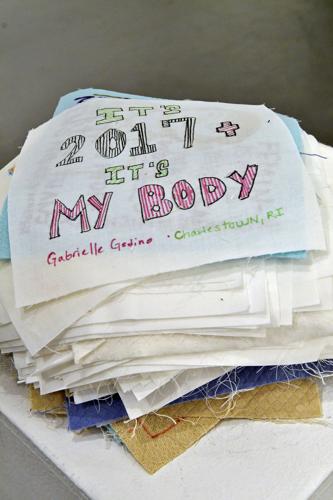 Hundreds of squares, signed by residents of Rhode Island, have been collected by members of The Women Project and will be sewn together into a quilt during a Sewing Bee to be held Saturday, Dec. 30.

Fabric squares containing messages from supporters of women’s reproductive rights were to be sewn into a quilt for The Woman Project’s ‘Project 2.0’ during a Sewing Bee held last week.

Hundreds of squares, signed by residents of Rhode Island, have been collected by members of The Women Project and will be sewn together into a quilt during a Sewing Bee to be held Saturday, Dec. 30.

The quilting squares were stacked serenely in a pile, swaths of color fraying at the edges, waiting to be bound together. But once arranged on the floor, each square offered a message that was anything but tranquil.

On one, in black marker, Jake from Bristol had scrawled, “RESIST! This is our America!!”

On another, Gail from Greene had drawn a pink uterus with the message, “My body. My Choice! Women’s Rights Are Human Rights.”

That sentiment was echoed on other squares. Ellen had drawn a raised fist surrounded by the message, “She persisted to support reproductive rights.” And Mel had screen printed her square, its message smooth and clear: “Keep Abortion Safe and Legal in Rhode Island.”

The squares are among the hundreds collected by The Woman Project since summer, and are part of its “Petition 2.0” effort. They will be sewn together during a Sewing Bee at the Unitarian Universalist Congregation of South County, 27 North Road, Peace Dale, Saturday from 10 a.m.- 4 p.m., forming a giant quilt to be used as a petition at the Statehouse, and other places, once the 2018 General Assembly session opens.

The project is a follow-up to the “Giant Petition In Support of The Reproductive Health Care Act,” for which The Woman Project created a 52-by-6-foot-long scroll, inscribed with signatures of Rhode Islanders, which was rolled out and displayed at the Statehouse in early 2017, and also brought to marches and rallies. A new bill will be introduced in 2018, hence the need for a new petition.

The Woman Project was founded about a year ago by five women in South Kingstown as an “artistic activism group that uses creative messaging and installations to invite inclusiveness on difficult topics that effect [sic] every Rhode Islander.” Using art as their main form of activism, the women have taken up the fight for women’s reproductive rights in Rhode Island. The group stems from the “Creating Together” lecture series that began at Hera Gallery after the 2016 presidential election, but has since branched off, becoming a 501(c)(4) entity. This a designation given to organizations that are not for profit and operate exclusively to promote social welfare.

“We want to protect our reproductive freedom,” said Mara Trachtenberg, one of the founding members, who said she thinks of the group as a network rather than an organization. She was joined by Jocelyn Foye, another founding member, on a recent evening at Hera Gallery.

Emily Boucher, one of the group’s collaborators, came up with the idea of creating a quilt and cut many of the fabric squares. And Jordan Hevenor, another founding member, suggested they host the Sewing Bee.

Creating a quilt, said Trachtenberg, “is a visible way to have our voices heard, [which is] the crux of what we’ve been doing.” She also noted that quilting has long been a women’s art form, and to come together in this way is an act of feminism in its own right.

Once finished, the quilt will be a “hanging spectacle,” Foye said, noting that each square represents one person in the state. She said the squares “go with us everywhere,” which explains the hundreds of signatures from people in communities across Rhode Island.

What a lot of people don’t realize, Foye said, is that “we are teetering on losing” the right to reproductive freedom “very soon.” She noted that a comment the group keeps hearing is that women’s rights in Rhode Island are “not an issue yet,” to which she replied, “It’s absolutely an issue.”

“So let’s be proactive about it now,” Trachtenberg said. She would like for the conversation to revolve around women’s health care – not just abortions. “We really want women to be able to take care of themselves,” she said.

“People just assume that we live in a democratic state and our rights are protected,” Trachtenberg said. “But that’s not the case in Rhode Island.”

Foye agreed, adding, “The Woman Project is about protecting people in the state.” She said they hope to provide people with facts about reproductive rights so they can decide for themselves what to do with that information.

The group’s plan is to unveil the quilt at the Statehouse in late January, likely Jan. 25. The signed squares will form a frame around a central panel that will read something along the lines of, “We support reproductive health care in Rhode Island.”

The Women Project meets biweekly in Wakefield, and also around the state, hosting at least one art project a month. The event Saturday is open to all, sewers and non-sewers, men and women, and food will be provided. For more information about the group and its upcoming events, visit thewomanproject.org.

Has this year’s heat and lack of rain negatively impacted your ability to enjoy the summer?

In what has been a rare sight this season, brief thunderstorms breezed through Rhode Island Tuesday night, bringing the Ocean State a sliver of rain on what has otherwise been a hot, humid and dry summer. The conditions have been so bad that Rhode Island Governor Dan McKee issued a statewide drought advisory this week, based on the recommendation of federal, state and local experts that make up the state’s Drought Steering Committee. This is on top of several communities in the Ocean State that have limited or banned outdoor water use this season. With all of those factors, has this year’s heat and lack of rain negatively impacted your ability to enjoy the summer? Why or why not? Let us know in this week's poll question below.