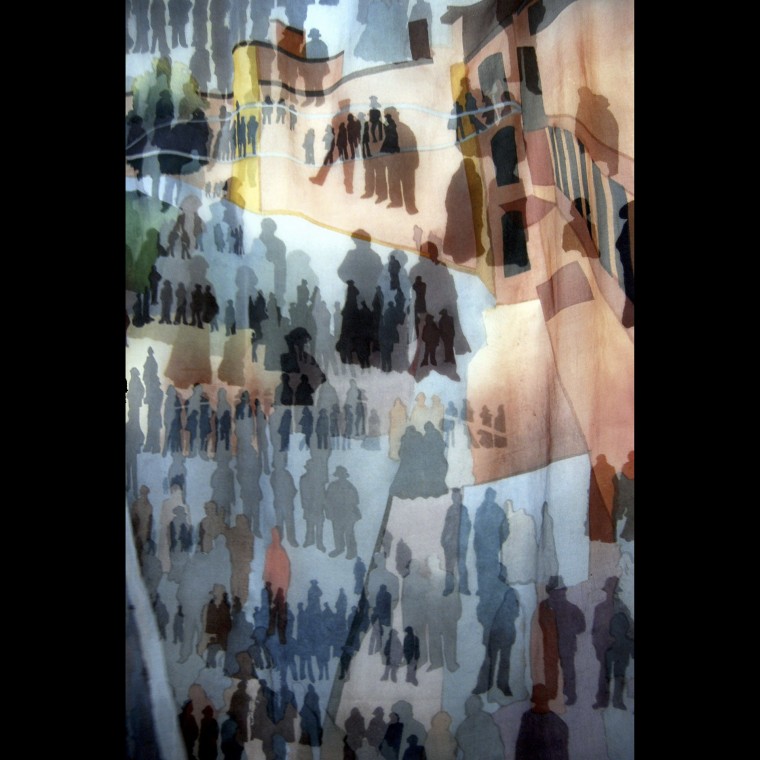 Deborah Baronas’ fabric drawing “Day Shift,” above, and Graham Heffernan’s painting “Lunarplex,” top right, are featured in the “On and Through and In Between,” which is the third exhibit at “Green Space” in T.F. Green Airport through April 30. 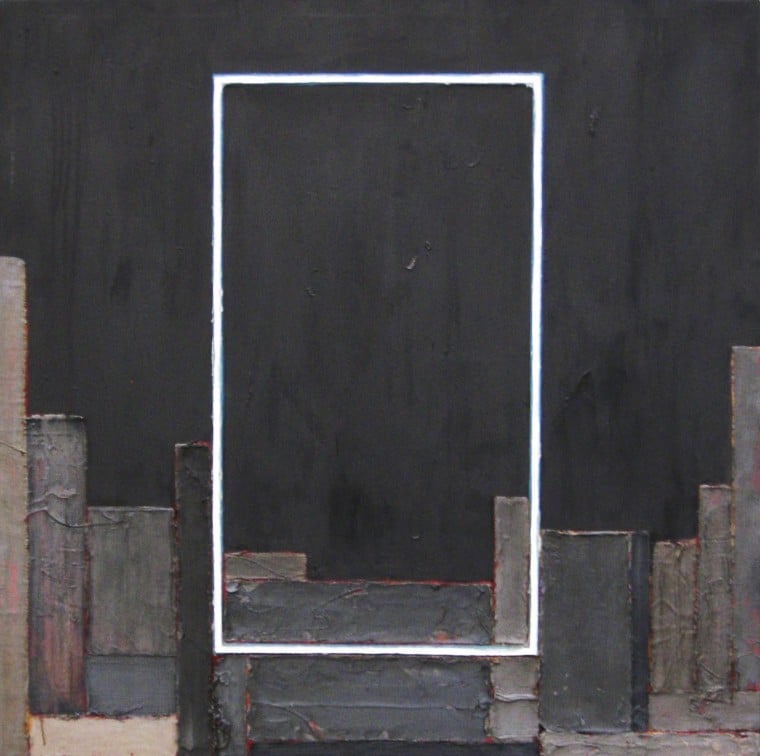 Deborah Baronas’ fabric drawing “Day Shift,” above, and Graham Heffernan’s painting “Lunarplex,” top right, are featured in the “On and Through and In Between,” which is the third exhibit at “Green Space” in T.F. Green Airport through April 30.

WARWICK — The anonymity and uniformity of the airport are a travel cliche.

Its vast asphalt tarmac and parking areas. Its concrete sidewalks and barriers. Its severe angles and cold corridors, and mazes of escalators and treadmill-style walkways.

From the giant glass windows overlooking the departing and arriving planes to the snaking lines separated by stanchions leading to airline gates, the modern airport has been designed so that anyone

can go anywhere in the world and never know where they are until they visit the gift shop, where a souvenir T-shirt or local newspaper may give away the location.

T.F. Green Airport in Warwick is taking steps to move beyond functionality and kitsch, moving toward the creation of an environment that gives visitors an authentic sense of the Ocean State. A gallery called “Green Space,” established through a partnership between the R.I. Council on the Arts and the R.I. Airport Corporation, presents a rotating series of work by contemporary Rhode Island artists in the airport terminal where the skywalk meets the main building.

The skywalk itself is a relatively recent addition to the airport, connecting the terminal to trains, buses and car rentals via the InterLink. With a low ceiling designed in shapes and colors that suggest the movement of the ocean, the walk offers relief from the traditionally dim atmosphere of the terminal. “Green Space,” located on two levels on the airport side of the skywalk, adds another layer of vibrancy and dynamism.

“The amount of light and air that surrounds you in the skylink, there’s such a sense of expansiveness,” said Lynne Harlow, director of “Green Space.” “With the artwork, we are reinforcing the idea that this is an airport in Rhode Island, and whether coming or going you know you’re in a place that has an artistic and creative community.”

The project was launched last year, with an exhibition titled “Paint. Now.,” featuring large- and small-scale paintings by Ruth Dealy, Shawn Gilheeny and Sue McNally. A second exhibition, titled “Reconsidering,” displayed two- and three-dimensional works by Joshua Enck, Bradley Fesmire and Ed Osborn. “Green Space” is now showing its third exhibit, “On and Through and In Between,” pairing two- and three-dimensional works by Deborah Baronas and Graham Heffernan through April 30.

The artists were selected by a panel that included Sarah Ganz Bythe of the Rhode Island School of Design Museum of Art; Amy Horschak of the Museum of Modern Art; Tony Johnson, director of the Office of Multicultural Affairs at RISD; and artist Will Reeves.

“I love the pairing of these two artists,” Harlow said of Baronas and Heffernan. “There’s a terrific communication between them even though they’re working in very different ways.”

Baronas, a Warren artist, creates dreamy, fabric-based works, many of them evoking the farm and mill era of 19th century New England. Her layered paintings and curtains are beautifully rendered, many of them depicting figures in carefully considered silhouettes that evoke a ghosted sense of past industry. She uses sheer fabric panels arranged in multiple layers to create depth and dimension.

Light and air play upon the works, stirring movement and generating repetitive images. Some of the pieces, such as the exquisite “Tobacco Tent,” shimmer like illuminated stained glass. Others, like the “Amoskeag Manufacturing Flag Project of 1914,” have a shadowy presence, with characters that move as you move past them, suggesting transience and the fleeting quality of all endeavors. The artist’s devotion to repetition alludes to factory artists who came before her. The rhythm of generations and the impressionistic patterns of memory are imprinted in her delicate yet dazzling images.

Like Baronas, Heffernan explores space and surface to evoke distant memories and dreams. But whereas Baronas emphasizes a folk narrative approach, Heffernan chooses a colder, more abstract direction. The Wakefield artist presents paintings of different sizes that collectively represent fragments of the spaces he encounters in a recurring dream.

Squares and rectangles, suggesting doorways or windows, are layered beginning with the shape of the canvas itself and continue through textured blocks of translucent paint, supplemented with lines and boxes that convey a sense of depth. Titles such as “Dark City” and “Complex 5” emphasize the labyrinthian, cerebral aspect of the paintings. Collectively, his work has the atmospheric quality of just waking, when the dream begins to disappear, and the world that seemed so real just seconds ago shatters and splinters into tunnels of light.

Harlow said “Green Space” will serve an ever-changing audience of local, national and international travelers. New exhibitions will be scheduled in the summer and the fall.

“Because it’s not in a single room or separated from the building in some wide, open space, a lot of people will naturally just pass through and see it,” she said. “It’s a great way to present contemporary art, and it’s a great showcase for Rhode Island artists.”

She added that RISCA and RIAC are partnering on a separate project at the Block Island airport, offering another chance to champion the cause of public art in Rhode Island.

“I think that art is a unifier for any civilization,” Harlow said. “And presenting art in a public space has a very special value to a community. It’s a way for everyone to see it and talk about it and think about it. It’s a way for art to become connected to our everyday lives.”