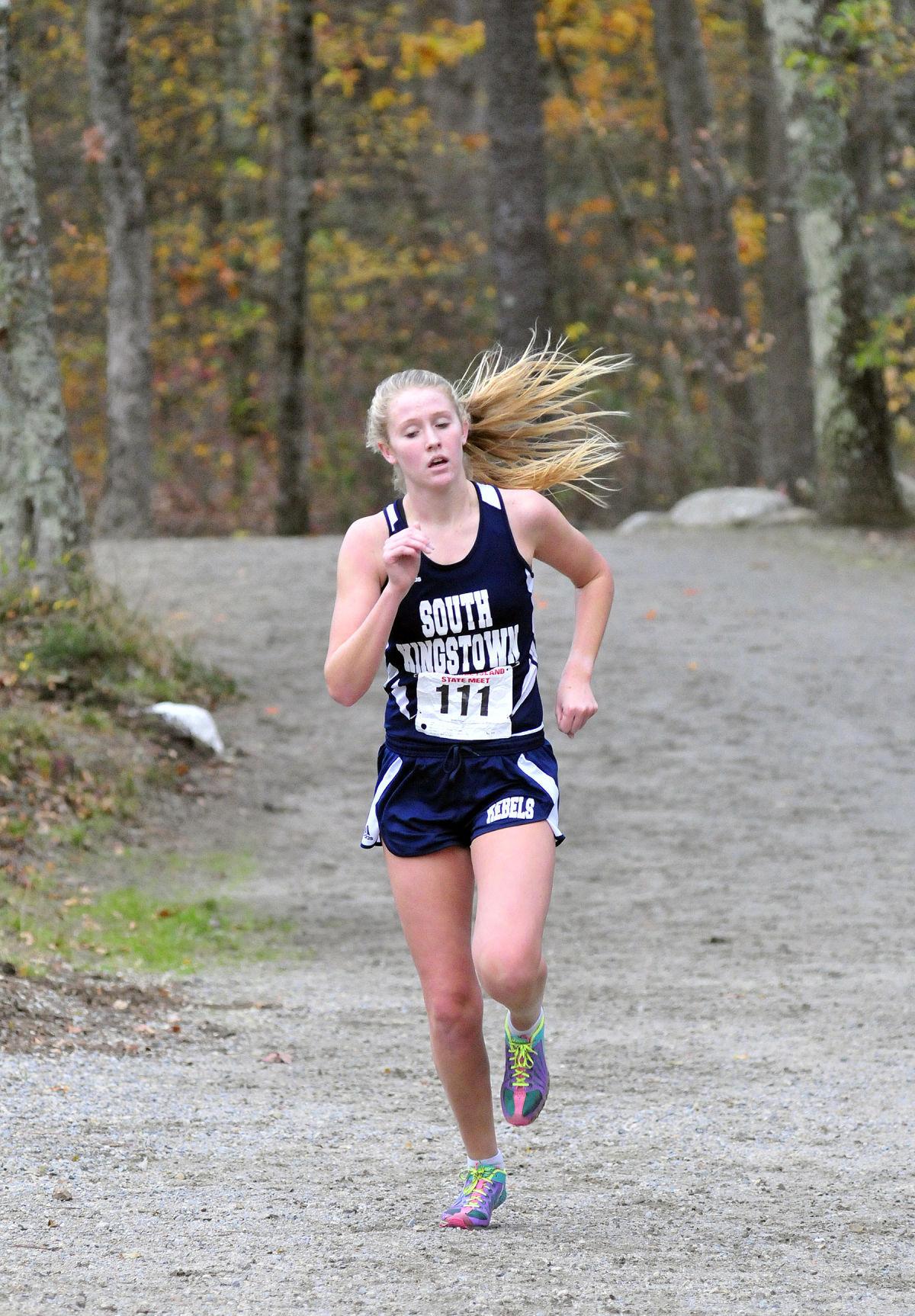 South Kingstown’s Ellie Lawler emerges from the woods as she nears the finish line at the state cross country championships Sunday at Ponaganset High School. Lawler pulled away from Westerly’s Randi Burr to win her second consecutive individual crown. 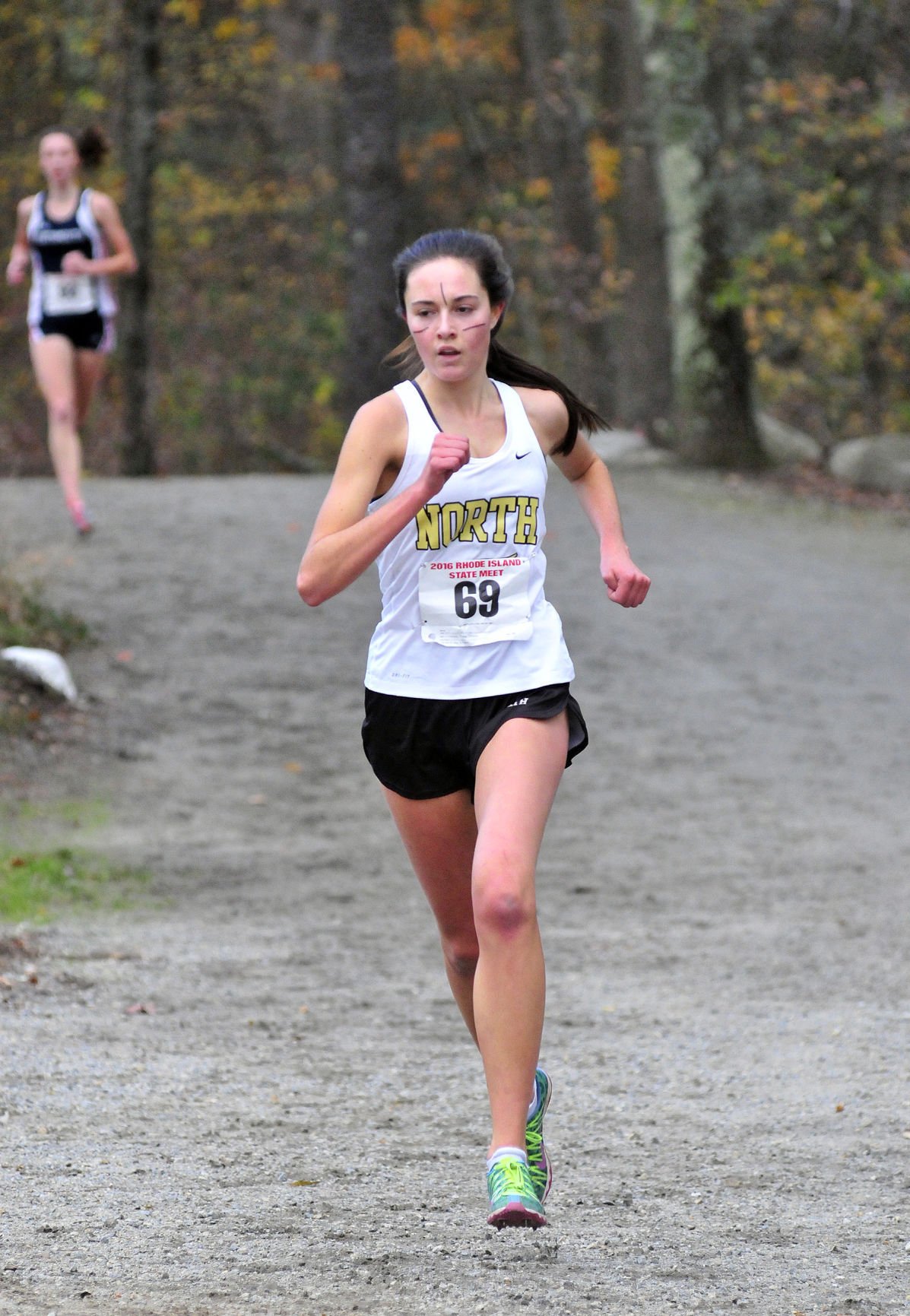 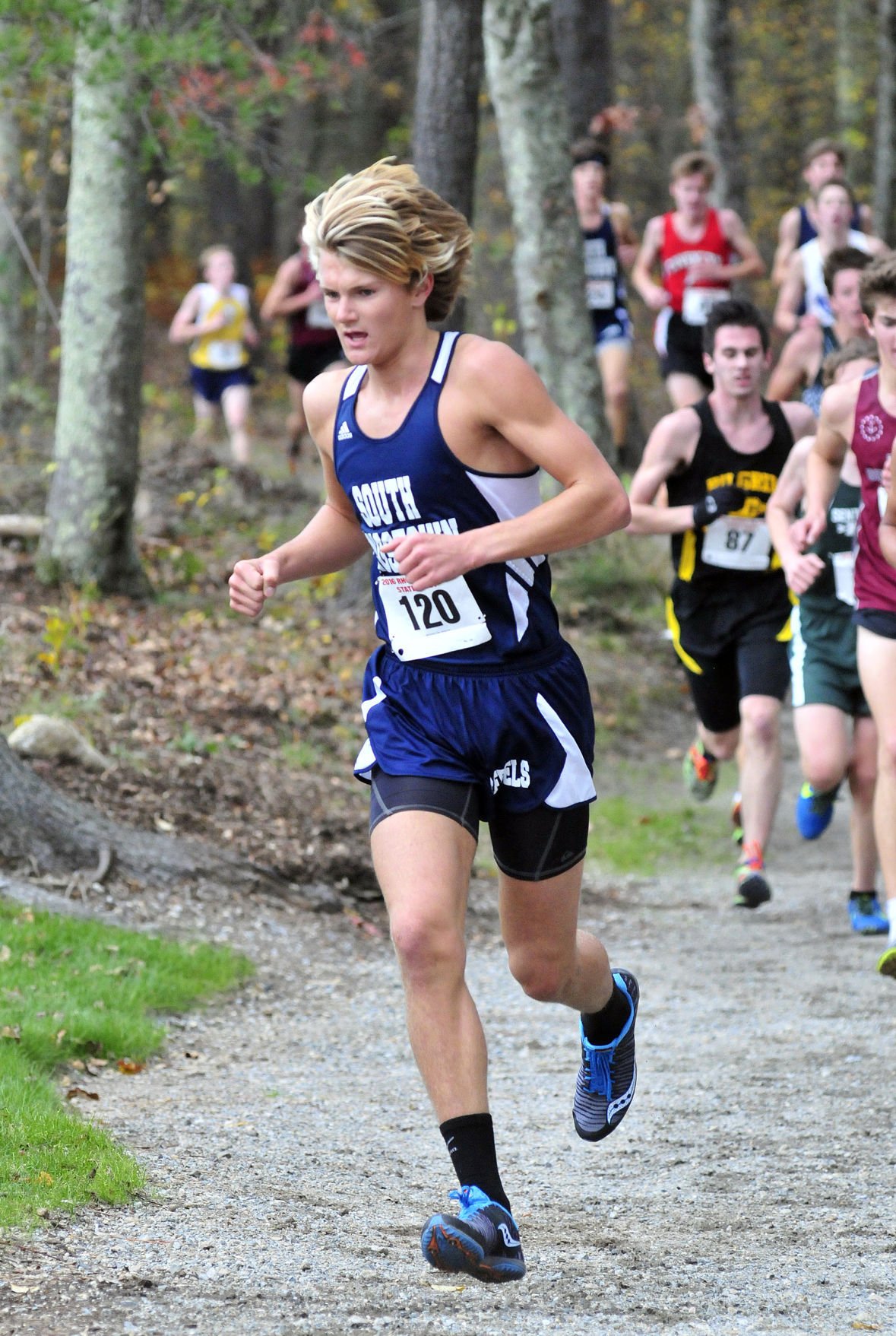 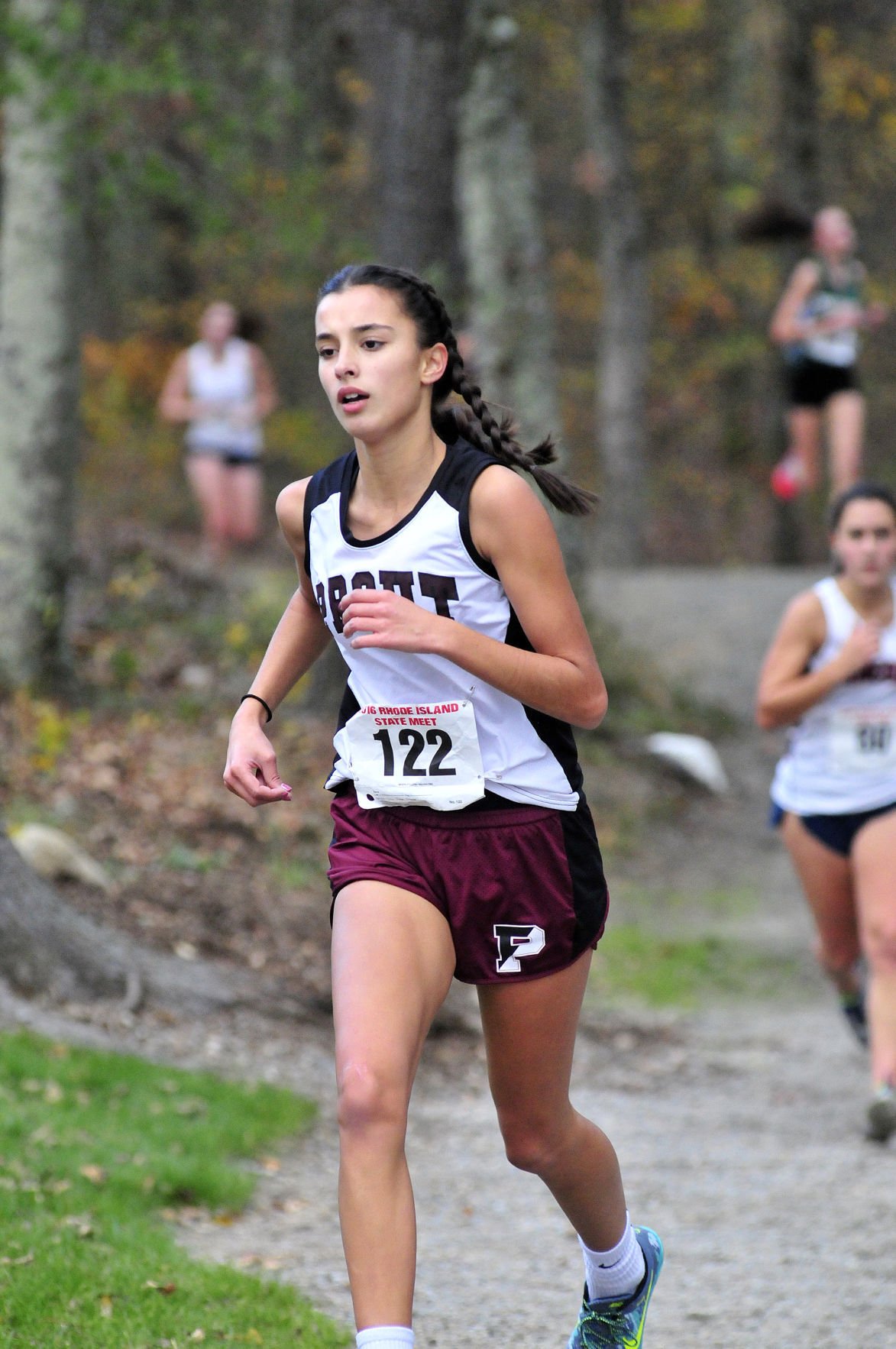 South Kingstown’s Ellie Lawler emerges from the woods as she nears the finish line at the state cross country championships Sunday at Ponaganset High School. Lawler pulled away from Westerly’s Randi Burr to win her second consecutive individual crown.

NORTH SCITUATE — Everybody on the course at Sunday’s state cross country meet at Ponaganset High School knew who the favorite was, including the favorite herself. A year after bursting onto the scene and winning the girls title as a sophomore, South Kingstown’s Ellie Lawler couldn’t help but think – and worry – about the target on her back.

“All year, I had a lot of pressure on me, being the fastest in the state,” Lawler said. “What I tried to focus on was just relaxing, staying strong the whole time and competing to my best without not enjoying it. I want to enjoy it as much as I can. That’s when I do my best – when I enjoy it.”

As the nerves wore off, Lawler enjoyed every step.

The junior pulled away from Westerly’s Randi Burr and crossed the finish line in 18 minutes, 0.67 seconds to capture her second consecutive state championship.

“She had a great race today,” South Kingstown coach Sherry Hathaway said. “She looked good. She ran relaxed. We had spoken about just staying relaxed and trying to run her race – get out in the first mile, gain some ground in the second and third mile and then stay strong, and that’s what she did.”

In the boys race, North Kingstown star sophomore Sam Toolin fell off a fast early pace and dropped out of the top 20, but the Skippers salvaged a sixth-place finish and a spot at the New England championship, which will also be at Ponaganset. La Salle’s D.J. Principe won his third consecutive individual title in a course record time of 14:56.09. The Prout boys finished 11th and South Kingstown was 14th.

For Lawler, the meet was almost a year to the day after her cross country career truly took off. Her state title last season sparked a remarkable postseason that included a runner-up finish at the New England championship, a top-10 finish at Foot Locker Regionals and an All-America showing at nationals.

As she lined up at the starting line Sunday, her resume certainly looked different than it did last year.

“It’s tough being the nationally ranked runner and coming back as a defending champion,” Hathaway said. “It puts some added pressure on her, but I think she really handled it well today.”

Honed in on the same plan she utilized at last year’s meet, Lawler ran a 5:35 opening mile. There was competition, though, from Burr, who had finished only four seconds behind Lawler at the Class B championship a week before. This time, Burr was on Lawler’s hip for much of the first mile.

“I knew Randi was so close to me for the last race and I knew she’d be close to me for this one,” Lawler said. “I knew she was going to be tough competition, so that definitely added to the nervousness. But in the end, I think it helped me. I wouldn’t have gone as fast without her.”

By the second mile, Lawler had gained some distance. After she came out of the woods for the final stretch, it was 15 seconds before Burr emerged. The final margin was about 12 seconds, as Burr finished in 18:12.01.

“Going into this, I told myself to relax and have fun but I definitely still had a lot of pressure,” Lawler said. “I was very nervous. I looked around and I just figured, ‘It’s one race. Do your best. Have fun. Relax and enjoy it.’”

The rest of the Rebels joined Lawler in doing the same. A week after winning the Class B title, South Kingstown edged North Kingstown by five points for third place in the team standings. Junior Kali Vanderlaan was the second Rebel across the line in 19th with a time of 20:03.71. Freshman Kyle Fish took 26th, senior Abby Cobb finished 37th and junior Mackenzie Fish grabbed 57th to round out the scoring. Hannah Southwick and Caroline Krekorian weren’t far behind, finishing 61st and 62nd.

“I thought we ran well,” Hathaway said. “My top four ran extremely well. My fifth and sixth – who were my sixth and seventh last week – really stepped it up and ran well for us. I’m really proud of them. We had a pretty young team and they did a great job. I’m excited.”

North Kingstown was the only team besides champion La Salle to place two runners in the top 12. Nunnery, a sophomore, took 11th in 19:38.17 and teammate Wyndom Chace finished two seconds later in 12th.

“They were together the whole way,” head coach Brian McNeiece said. “They did a good job, and the other girls did well. We had a couple who weren’t really feeling well. But for the most part, they ran well, which is what you want to see from your athletes. The other teams kind of just stepped it up. We knew it would be close between second through fifth. We ended up fourth – not really where we wanted to be, but we knew everybody would be close. Looking back at it, there are a lot of positives here. We ran well and we get to come back here Saturday and do it again.”

Katy Brayman was the third Skipper across the line in 31st. Jamie Hazel finished 35th and Quillyn Smith closed the team’s top five in 55th. The team finish will send North Kingstown to New Englands for the eighth year in a row.

“It’s a goal of ours every year,” McNeiece said. “It’s something we do. Maybe we shouldn’t count on it, but it’s something we expect to do. And it does mean a lot to us. We’re grateful.”

Prout got a big performance from freshman Sophia Mayo, who finished 23rd in 20:08.28. She was the top freshman in the field. Also scoring for the Crusaders were Emily Pinch (77), Mary Reynolds (99), Allison Slitt (100) and Emily Slusarczyk (109). Narragansett did not have a state qualifier.

North Kingstown delivered the top area performance in the boys race, though the Skippers and their top runner were hoping for more. Toolin, who finished third in the state as a freshman, ran second to Principe for much of the first mile but faded to 23rd. He was still the top area finisher.

“He gave us everything he had – it just wasn’t his day,” head coach Paul Tetreault said of Toolin. “He said he just didn’t feel right. He had a good week of preparation. Last week at the class meet, he ran well within himself. He felt he was right on. He may have gone out a little too quick today. That happens. He’s disappointed, but he’s a tough kid. He’ll be back.”

Noah Tellier finished one spot behind Toolin in 24th. John Fuller took 42nd, Alex Norris was 53rd and Jack Perreault took 56th to wrap up the scoring. The sixth-place finish secured a trip to New Englands – and a chance for a better day.

“Noah Tellier had a real good race. John Fuller ran a real good race. Alex, Jack, Derek [Sullivan] – they ran solid. Not their best race, but by no means, one of their bad races,” Tetreault said. “They did a good job. It just wasn’t our day. We’ll see where it goes from here.”

Laird French was the top performer for South Kingstown in 66th. Teammate Tim Sheehy was step-for-step with him in 67th, Kellan McEachen took 79th, Broc French took 85th, and Aodhan Meyer finished 90th as the Rebels closed in 14th.

Qualifying teams and individuals will be back at Ponaganset Saturday as the course hosts the New England championship. Lawler will be among the girls favorites as she angles for another big postseason.

“I started out a little slow this season, but I’ve been improving consistently,” Lawler said. “I’m hoping to do what I did last year. I’m not sure if I’m going to Nike or Foot Locker this year, but I’m looking forward to a good postseason.”