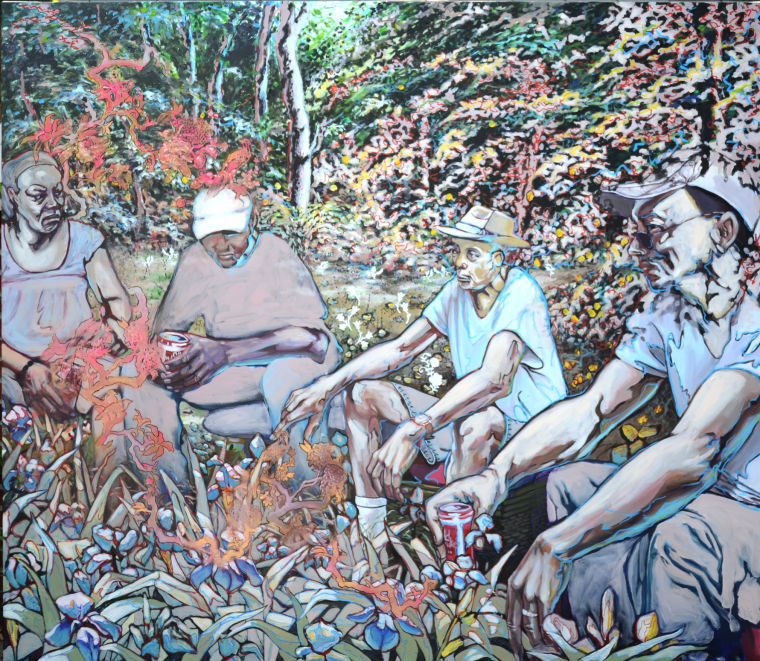 An image of Bob Dilworth’s work, “Backyard,” will be displayed on a billboard in Providence in January, as part of the Artboards RI project. The original work was made this year from acrylic, oil and ink paint.

Wilson Aguilar’s photograph was installed at 800 Charles St., Providence, as part of the Artboards RI project.

An image of Bob Dilworth’s work, “Backyard,” will be displayed on a billboard in Providence in January, as part of the Artboards RI project. The original work was made this year from acrylic, oil and ink paint.

Wilson Aguilar’s photograph was installed at 800 Charles St., Providence, as part of the Artboards RI project.

Take a walk down Valley Street, Allens Avenue or Charles Street in Providence and you might notice billboard space filled not with advertisements, but with professional works of art. The only thing they’re selling is conversation. Plus, it’s free.

Every 12 weeks, the work of a Rhode Island artist, including the director of the University of Rhode Island Main Gallery, will be featured on billboards in different locations throughout the cities of Providence and Central Falls. The project, called Artboards RI, is intended to engage schools and other community organizations within walking distance of the billboards in conversations about the art.

The creator of Artboards RI, Ruth Dealy, said she thought of the idea in 1974, to bring art to lower income areas in Providence, Central Falls and Woonsocket. The name of the project was then “Loft Horizons,” which was, Dealy said, a “terrible” name. The first project was fueled by the donation of a billboard space by the Radding Sign Company and a $500 grant from the Rhode Island State Council on the Arts, plus the willing artists who contributed work, including Dealy herself, and Bill Drew, who is currently on the faculty of Rhode Island School of Design.

Eventually, however, the project fell through when funding became scarce. Dealy said she had been trying since the ’70s to get it off the ground once again and only recently been able to receive help from Rhode Island School of Design, AS220, the city of Providence, Lamar Advertising and area businesses. The project resurrected last month with a new name and a new approach: to “enrich communities with art where they least expect it.”

“My goal is to bring art into neighborhoods that are profoundly neglected,” Dealy said, emphasizing that if people living in those areas want to contribute to the community, they could have a way to do so through art. “For a kid to be an artist and not just a ‘troubled kid,’ to have an identity choice like that, there’s a freedom to restart your life.”

“We always talk about art being an important [part of] Rhode Island, [but] art is segregated from the general community,” said Linda Newton, project coordinator. “I think it’s a great way for the community to talk about art.”

One of the participating artists, Bob Dilworth, director of URI Main Gallery and professor of art, said when Dealy first invited him to contribute a piece of work, he thought it was a great idea.

“One of our original ideas was to create a place in areas of the city where art can be talked about, where a dialogue could happen that wouldn’t normally take place,” he said. “It’s a whole new world that becomes accessible. Who knows who’s looking at this work? Who knows who will be impacted by it? Just [think] about the possibilities.”

Dilworth and Dealy attended RISD in the late ’60s. He said they have worked together many times over the years, usually with one suggesting an idea and the other happily complying. This project was no different.

Dilworth’s work is entitled “Backyard,” and is part of a new series he has been working on for about four years. While his main medium is paint, he said his work has evolved and he used a lot of fabric and paper in the series. But the materials used in the piece will not be the primary discussion point, since all of the works shown on the billboards are high resolution images of the original works of art.

Dealy said displaying images of the art is a better approach than having to find – and pay – a crew to help with painting, installing and executing with safety precautions on the billboards. This way also makes it easier on the artists because it gives them some freedom to choose the works of art they wish to display.

“Backyard,” Dilworth said, is an “outdoor” piece because of what it depicts, but it was difficult to make the choice of what to submit because he could see a few of his other works doing well outdoors. When asked if the project could be categorized as street art, another outdoor art form with revived interest, he said that he sees this project as having both a different philosophy and execution.

“Street art is spontaneous – it’s made there on the spot. Usually, there’s not a lot of forethought and has more to do with this element of tagging, relying on just that energy of the moment,” he said. “Whereas what we’re doing is almost the opposite. These are studio pieces that are really much considered and created without the idea of ever being placed on a billboard or outside.”

Dealy said she sees the project as being very close to street art, and her initial spark of inspiration came from witnessing how much public art was part of daily life when she visited Denmark. Dealy also said once art crosses the threshold to be visible in a public space, it should sustain a dialogue and not just a monologue.

“I feel a huge urge to paint a blank wall and have my paintings outside,” she said, though she does not fulfill that urge when she sees a blank wall. “My paintings take at least three months. The desire is immediate and the execution is long. Painting is bigger than me and I really just have to deliver it.”

“When you look up at it, it would be a very different piece than the kinds of things people see on a billboard. Maybe galleries in Providence, the RISD museum, the Newport Art Museum – those places will then start to surface as places where they can see more art like that.”