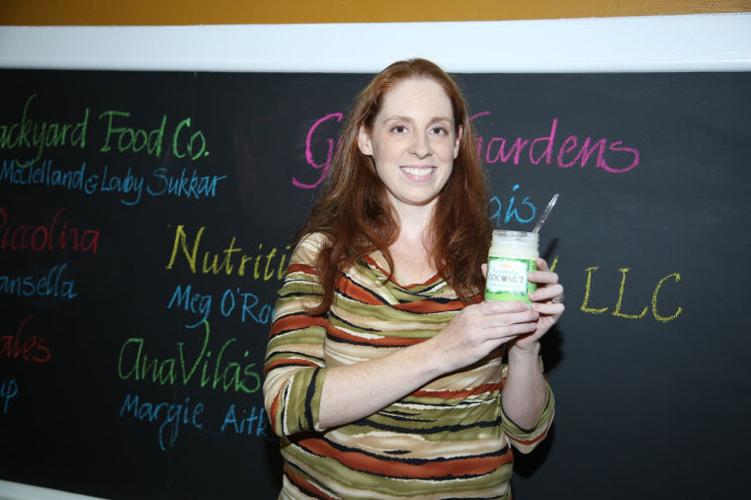 Sophia Gartland of North Kingstown is the founder of Essentially Coconut, one of 28 businesses getting started at the new Hope & Main food business incubator in Warren. 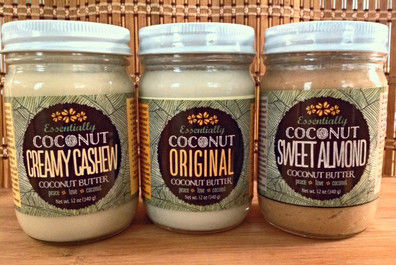 Essentially Coconut specializes in coconut butters, which are produced entirely in Warren. 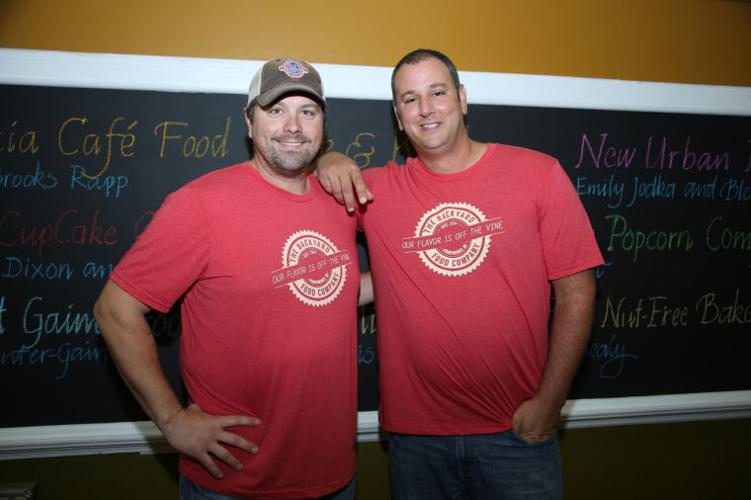 The Backyard Food Company is a collaborative effort by Loubnen “Louby” Sukkar, left, who owns K&S Pizza in Charlestown, and Matthew McClelland. 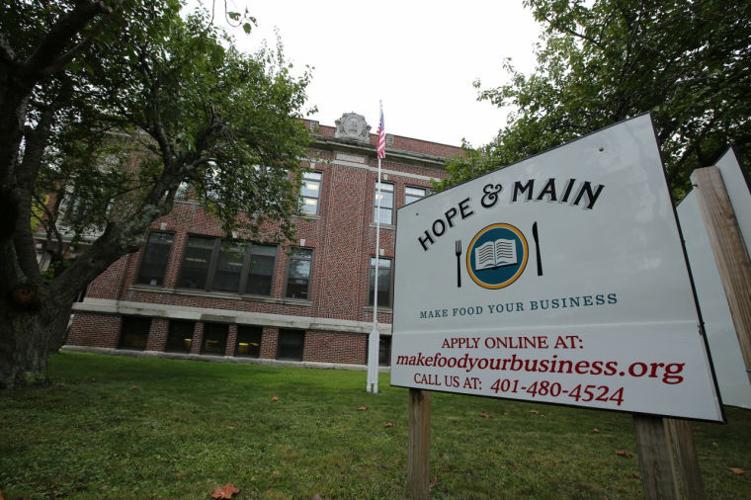 Hope & Main is a food business incubator located in Warren.

Sophia Gartland of North Kingstown is the founder of Essentially Coconut, one of 28 businesses getting started at the new Hope & Main food business incubator in Warren.

Essentially Coconut specializes in coconut butters, which are produced entirely in Warren.

The Backyard Food Company is a collaborative effort by Loubnen “Louby” Sukkar, left, who owns K&S Pizza in Charlestown, and Matthew McClelland.

Hope & Main is a food business incubator located in Warren.

Four years ago, Sophia Gartland was living in her native Montana, finishing a degree at Montana State University in nutrition. Now she calls North Kingstown home, and since she’s been here, she has married, had a baby – and founded a business.

It’s called Essentially Coconut, and it’s one of 28 businesses getting started at the new Hope & Main food business incubator in Warren. Among them is another start-up with South County ties: The Backyard Food Company, a collaborative effort by Loubnen “Louby” Sukkar, who owns K&S Pizza in Charlestown, and Matthew McClelland.

Theirs are tales of two food businesses founded on passion, fostered by this new “incubator” and encouraged by people saying, “This is delicious!”

Located in a refurbished Warren school, Hope & Main gives entrepreneurs like Gartland and the Backyard guys access to shared-use commercial kitchens where they can cook up their products – and their ideas – without an upfront investment in equipment.

Gartland makes a collection of coconut butters; the Backyard guys have a line of savory tomato and pepper jams and relishes. Nobody knows how big Essentially Coconut and The Backyard Food Company could become, but here’s how they got started.

“It was pretty random, actually,” Gartland said of relocating to Rhode Island. She’d been here before, but this time, while falling in love with the state she also fell in love with the man who now is her husband. They had a son – and he inadvertently became the impetus for Essentially Coconut.

“I was frazzled being at home with a new baby,” Gartland said. “Maybe all women won’t understand this, but I think I’m a better mom when I have something more to focus on.”

Something like coconut butter, which is not as far-fetched as it seems. Gartland had long been interested in Caribbean food and culture, and during her last year in college had written a research paper on the health benefits of coconut. It dealt with the metabolism of medium-chain triglycerides, and although we’ll skip all the science here, her work gives credence to her statements that coconut not only provides vitamins, minerals and antioxidants but that it’s easily digested, improves absorption of other nutrients and can help immune function.

Plus, it tastes good. Gartland promotes it as “a tropical vacation in a jar.”

She started mixing up small batches of coconut butter in her kitchen, using it as a spread and incorporating it into other dishes.

“I tried adding nuts, sweetening it with honey or maple syrup, and everybody was loving it,” Gartland said. “I wondered: Can I make money doing this?”

Her first call was to Farm Fresh Rhode Island, a non-profit founded in 2004 to support the local food system by connecting producers, markets and consumers. Folks there got her started on licensing requirements and helped her find the commercial kitchen she needed to produce large quantities of coconut butter. That was 2012 and 2013 when Hope & Main was still a work in progress.

She ended up at a Grange hall in North Dartmouth that shares its commercial kitchen with food entrepreneurs. Her first sales were at the Wintertime Farmers Market at the Hope Artiste Village in Pawtucket last November, and over the summer she sold periodically at four farmers markets, including one in Wickford, until she had trouble keeping up with demand.

When Hope and Main opened in October, Gartland got on board, and as soon as her new, big coconut grinder is hooked up, she will produce entirely in Warren.

She enjoys selling at farmers markets and is at the Pawtucket location every Saturday from 9 a.m. to 1 p.m. “When you sell in stores, you have no idea what people think, but at farmers markets you hear directly from customers,” she said, and those comments have prompted a few changes.

“I tweaked the almond blend,” she said. “Initially it wasn’t as sweet. And I’ve introduced smaller jars.” People can purchase her Original Coconut Butter or the Sweet Almond and Creamy Cashew blends in 12-ounce or 4-ounce jars. She’s now experimenting with chocolate and maple walnut blends.

All are delicious as spreads, but Gartland has loads of suggestions, and purchasing options, on her website, essentiallycoconut.com, for ways to use coconut butter, like mixing it into oatmeal; drizzling it over butternut squash or sweet potatoes; adding it to curries, soups and smoothies; topping ice cream or, her final suggestion – experimenting.

A new baby prompted Sophia Gartland’s new business, and coincidentally, it was children – their school-aged broods – that brought Matt McClelland and Louby Sukkar together. The children were friends, and soon the parents, Matt and Robyn, Louby and Audrey, were, too.

So when Matt was hospitalized with a rare, but treatable, cancer in January 2012, Louby was a regular visitor. While recovering during the long, cold months of winter, McClelland got thinking about planting an organic garden beside his Warwick house to foster healthful eating and “help lighten the grocery bill,” he said.

“He gave me the gardening bug,” said Sukkar, who already had brought the locally grown philosophy to K&S Pizza, which his family opened in 1986.

“I’d been thinking, ‘How do I differentiate my restaurant?’” he recalled. “I decided to go local.” From fresh tomatoes to snow plowing, Sukkar looked for local suppliers.

Now, he and McClelland became producers, and when they grew more than they could use, they asked family and friends for recipes to preserve the harvest. The first time Louby served their tomato jam and a jalapeno concoction to guests, everybody loved the flavors – and a business idea began to take shape.

“Maybe we could make something out of this,” McClelland remembered thinking.

Their search for a commercial kitchen took them to Greenfield, Massachusetts, but Sukkar said, “We were hell-bent on staying in Rhode Island.” When Hope & Main came online, that became possible.

They are excited that the University Heights Whole Foods market in Providence soon will put their products on its shelves. Within a couple of weeks, they’ll also sell online at thebackyardfoodcompany.com. While they want to balance growth with the ability to produce a consistently good product, they’re also ambitious.

“I grew up in Pittsburgh in the shadow of the Heinz plant,” McClelland said. “We’d like to be the new Heinz.”

There is nothing easier, they said, than serving their tomato jam with crackers and cream cheese as a party snack, and they’re thinking about branding a burger topped with the jam as an Ink Burger. They also make Apple Bottom Butter, which Sukkar recommends as a baste when grilling meats, poultry or fish, especially salmon.

“We never anticipated when we started a garden that we were starting a business,” Sukkar said, “but the business started out of a passion – and we really love it.”