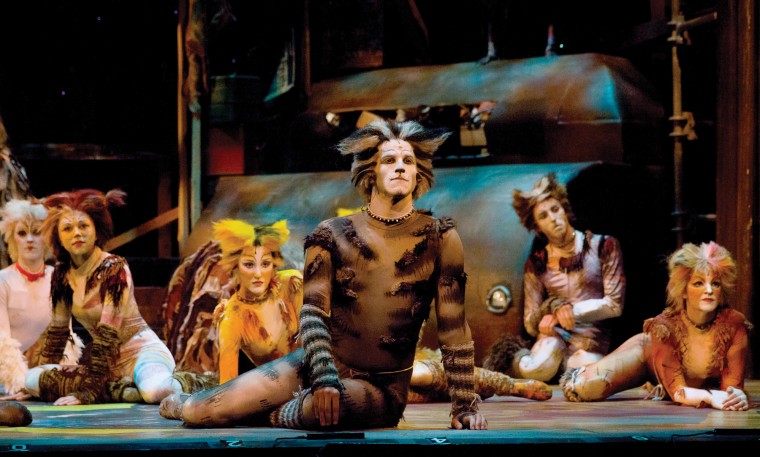 "Cats" will be staged at Theatre By The Sea through July 13. 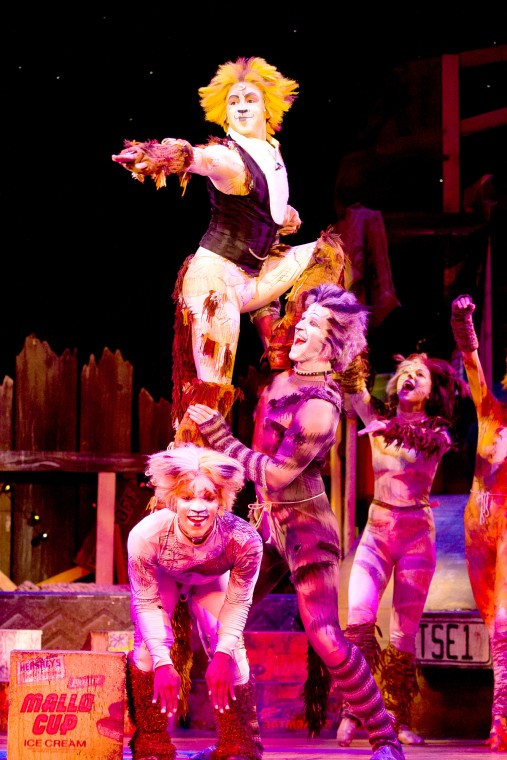 Arnie Rodriguez as Skimbleshanks in “Cats” at Theatre By The Sea. The musical will be staged through July 13.

"Cats" will be staged at Theatre By The Sea through July 13.

Arnie Rodriguez as Skimbleshanks in “Cats” at Theatre By The Sea. The musical will be staged through July 13.

SOUTH KINGSTOWN — The secret life of cats leapt onto the Theatre By The Sea stage Friday night, offering up Andrew Lloyd Webber’s musical “Cats” as an entertaining, family-friendly – and occasionally in-your-face – spectacle of vaudeville, circus, song and dance.

“Cats” – the second-longest running musical in Broadway history – is based on T.S. Eliot’s poems, “Old Possum’s Book of Practical Cats.” The plot is simple: A tribe of feral cats gathers annually in a junkyard for its leader to decide which cat will be given the honor of moving on to the next of its nine lives. As the evening progresses, the audience is introduced to members of the tribe, and in the end, the leader’s choice crosses over. (Rest assured – it’s not as depressing as that sounds.)

It is a show about redemption and rebirth, and Director/Choreogapher Richard Stafford – once the dance supervisor for the Broadway production – stays faithful to the original. Given more than 30 years have passed since “Cats” opened at the Winter Garden Theater in New York, there’s a risk in that approach. Will the once-daring and ground-breaking show look dated? Will the production team have the ability to recreate the giant junkyard of a set that spilled into the audience and costumes that were risque, feline and functional all at once? How would Stafford keep a cast of 19 on a smaller stage for the better part of two-and-a-half hours without it looking cramped and losing focus?

Theatre By The Sea’s production banishes those worries. The cast members are consistently triple threats – strong singers and dancers, who have expressive faces and acting ranges that play beyond the heavy cat-like make-up. For anyone familiar with cat behavior, the actors, under Stafford’s choreography and direction, behave in a decidedly feline fashion, without resorting to cliches. Anyone who has ever visited an animal shelter knows the wide variety of types and feline personalities, and in kind, the actors each look, act and sound unique.

The choral numbers, including “The Naming of Cats,” and “The Jellicle Ball,” sound clean, without sliding into notes, and well-blended, while still allowing each voice to retain its individuality. Likewise, the intensely physical choreography, which ranges from graceful to sensual to acrobatic – and includes elements of jazz, modern, ballet and tap – allows each actor to move with his or her own style. Even when all 19 cast members are on stage, the choreography is precise, and the space – amazingly – never seems packed or jumbled. On a few occasions during the big dance numbers, some actors sounded a bit out of breath as they sang. While this is considered a sin from an actor’s perspective, from the audience, in an age when lip-syncing has become common, I found it refreshing to know the vocals were, indeed, live.

There is not a disappointing performance. Katy Blake as Grizabella the Glamour Cat, is a faded, aging diva trying to maintain her dignity. She moves with an aching limp – like a cat who has been hit by a car, but survived to add disability to a lifetime of injustices. Her song, “Memory” is the only hummable song in the score and some actresses wail their way through it, overwrought to the point of caterwaul. Blake chooses to lay the song bare. She keeps it simple, letting Grizabella’s pain drive the performance. It’s a powerful number.

Chris Stevens, as Rum Tug Tugger, the tom cat with a mullet, grinds and howls and struts around the junkyard like a Brett Michaels’ era rock star. Felipe Barbosa Bombonato as Asparagus, the actor’s cat, suffers from “palsy that makes his paw shake” and knows he isn’t what he once was, but rallies to shed those years as he relives his swashbuckling role of Growltiger, the pirate who battles Ghengis and the Siamese while simultaneously seducing the lovely Jellylorum (Lucy Horton).

Other notable performances included Ian Parmenter as Munkustrap, the friendly faced master of ceremonies; Amanda Pulcini, nimble in an enormous fur coat as Jennyanydots; and Peter S. Adams as Old Deuteronomy, the tribe’s benevolent leader. It’s hard to leave so many out – the cast did not have a weak link.

The production side is equally strong. Musical direction is by Milton Granger, also the conductor and lead keyboardist. He is joined in the pit by Mike Moise and Jason May on keyboards, Ryan Guerra on guitar, Dave Gries on bass, and Mike Sartini on drums. Granger keeps the tempos sprightly and the band sounds larger than six, clean and well-mixed.

Anthony R. Phelps created a junkyard set that does not overtake the audience, but still gives the actors plenty of unique trash-inspired spaces to leap and play and rest. (Keep the aisle clear during the performance, though, as the cast makes use of that space frequently.) Kansas City Costume Co., takes body stockings and leg warmers, and along with Makeup Designer Stephanie Harrop and Wig Designer Gerard Kelly, recreates the glam-rock feline looks that made this show a ground breaker in 1982.

Special kudos to Sound Designer Leon Rothenberg – who won a Tony Award earlier this month – for his redesign of the old barn’s sound system, which is now crystal clear, without the buzz, fuzz and dead spots of years past. Bad sound can mar otherwise terrific shows, and Rothenberg’s work is a significant improvement that will make every show more enjoyable for the audience.

In its 31-year life, “Cats” has been performed in Rhode Island only once before – the 25th anniversary national tour opened at the Providence Performing Arts Center in 2007. While this show has traditionally been marketed as “now and forever” it could be years before you have another chance to see it. It’s unlikely you’ll see a production this strong. Make tracks.

Managing Editor Liz Boardman can be reached at editorial@scindependent.com.