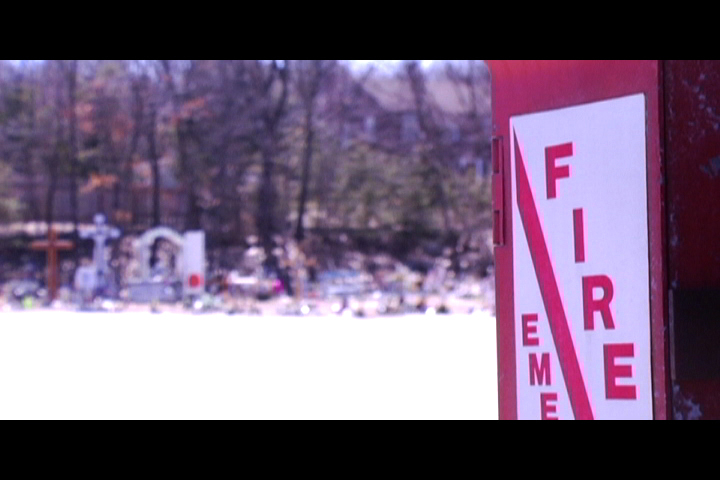 A fire call box (above) on a pole stands at the Station nightclub site. The box number is 4414. This shot is seen in the film “41,” which documents victim Nicky O’Neill’s life, art and fascination with the number 41. 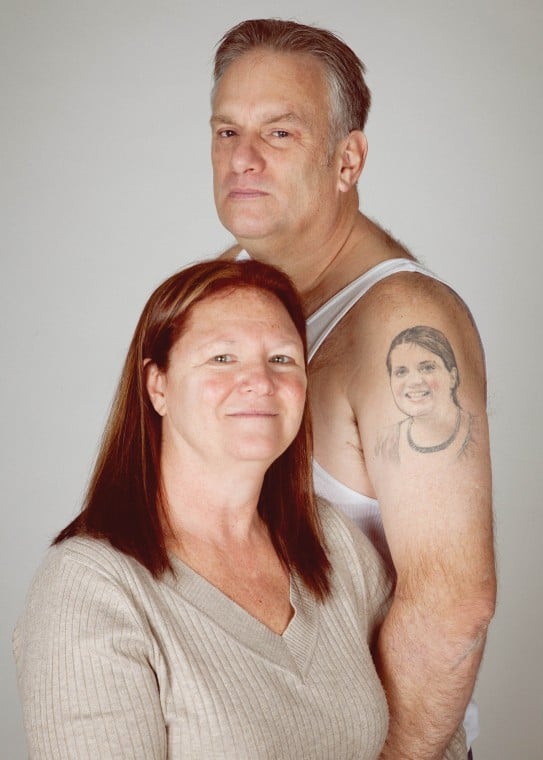 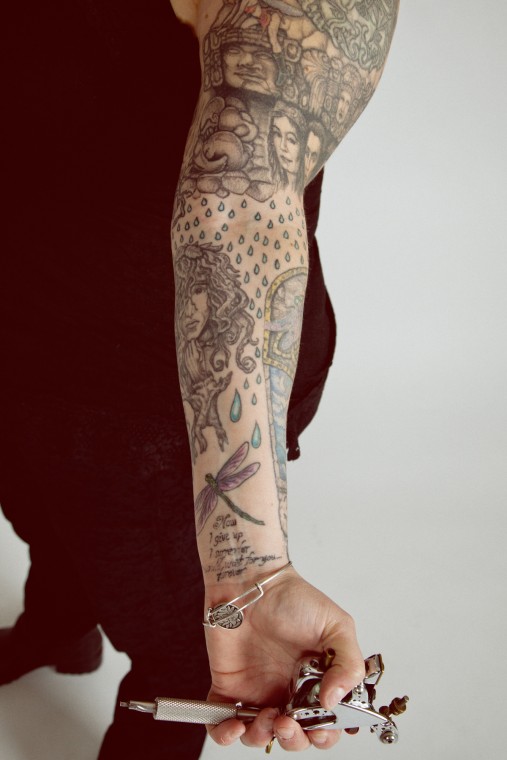 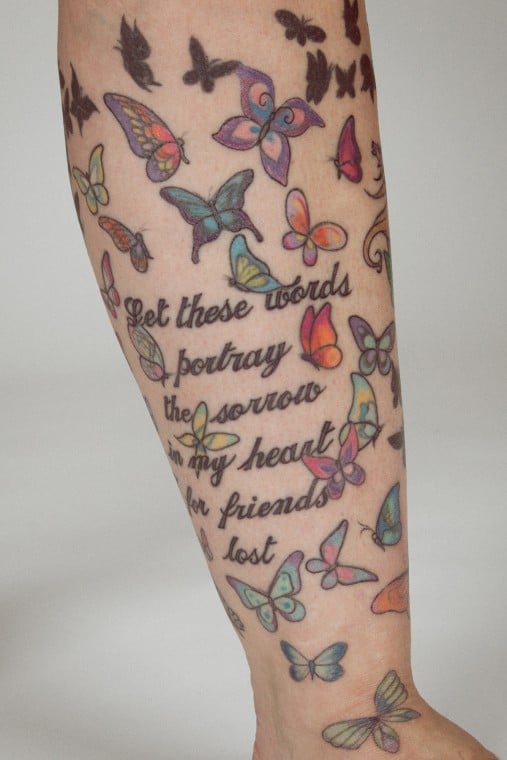 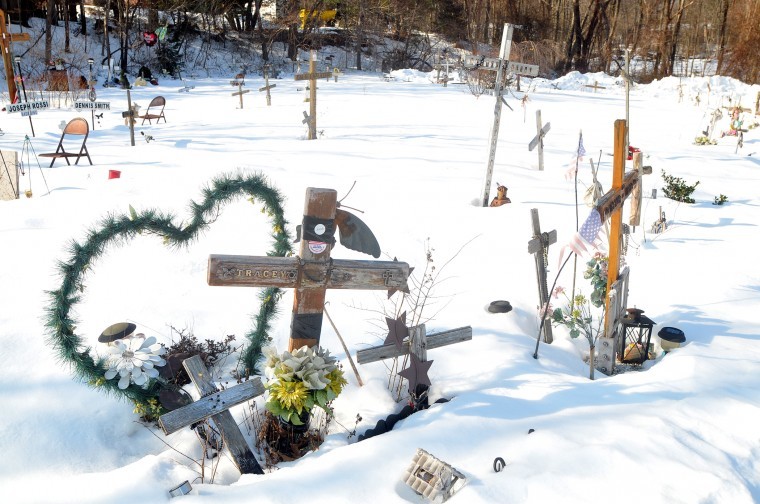 Memorials for the 100 victims of the Station nightclub fire, above, occupy the site of the blaze, which occurred 10 years ago. Each memorial is its own piece of art for remembering loved ones lost Feb. 20, 2003. Christine Jones’ tattoo, below, of 100 butterflies is one of many photographs that hung at the Station Ink exhibit in Pawtucket last weekend. Her tattoo reads “Let these words portray the sorrow in my heart for friends lost.” The exhibit honored the 100 lives lost in the fire.

A fire call box (above) on a pole stands at the Station nightclub site. The box number is 4414. This shot is seen in the film “41,” which documents victim Nicky O’Neill’s life, art and fascination with the number 41.

Memorials for the 100 victims of the Station nightclub fire, above, occupy the site of the blaze, which occurred 10 years ago. Each memorial is its own piece of art for remembering loved ones lost Feb. 20, 2003. Christine Jones’ tattoo, below, of 100 butterflies is one of many photographs that hung at the Station Ink exhibit in Pawtucket last weekend. Her tattoo reads “Let these words portray the sorrow in my heart for friends lost.” The exhibit honored the 100 lives lost in the fire.

The butterflies, part of the Station Ink exhibit at the Pawtucket Armory, honored those lost in the nation’s fourth deadliest nightclub fire Feb. 20, 2003 in West Warwick.

The exhibit featured photographs of more than 60 people who had gotten tattoos to honor these victims. One is a sacred heart surrounded by rays of light belonging to the exhibit’s organizer, Paula McLaughlin, who got the tattoo in memory of her brother and sister-in-law, Michael and Sandy Hoogasian.

The project is one of many art forms to rise from the ashes of this devastating night. Expressing oneself through art can be an effective way of working through grief when words fall short. This is no new concept. History is dotted with sorrow revealed through artistic expression – take Poe’s “Annabel Lee” for example.

McLaughlin had the idea of Station Ink in 2003. Her brother and sister-in-law loved tattoos and she knew numerous people were inked to honor the victims. Her plan was put on hold until last year when she felt the pieces moving into place. The exhibit was something McLaughlin said she needed to do.

Word of McLaughlin’s project spread. More than 60 people showed up at three different photo shoots shot by McLaughlin’s friend and professional photographer John Pitocco. With the help of numerous volunteers and donations, McLaughlin’s idea of a larger-than-life exhibit became a reality.

McLaughlin said they honored the subjects by letting them pose however they wished, allowing each photo to tell its own story.

“We realized that day it wasn’t just about the tattoos. It was about the people...the faces. They told a million words. It’s so powerful to see the pictures,” said McLaughlin.

McLaughlin also designed pins whose proceeds will go to the Station Fire Memorial Foundation, but the exhibit was not about charity. She wanted her mother to have something else to focus on in February, she said. For McLaughlin, the exhibit will take the edge off the awful feelings that seep in as the first of the month arrives. The exhibit doesn’t offer closure but she personally believes it has helped her move through the pain.

“You got handed this whole new life. You have to work through it. But as far as healing...it definitely has helped me. I’m able to talk about it,” she said.

McLaughlin considers the project to be a creative journey. The exhibit was held briefly last weekend but McLaughlin hopes it can be installed again. She is proud of the project and hopes to publish a book of the exhibit.

“We’ll never ever, ever forget and we wear them with us every single day, and that’s what our art is,” she said.

Just as personal are the memorials at the site of the fire. They are a folk art that feeds people’s souls, according to Christian O’Neill, who lost his brother, Nicholas “Nicky” O’Neill, the youngest victim – a musician and artist – in the fire. The memorials are a way for people to celebrate the best part of what somebody was, he said.

O’Neill and friend Christian de Rezendes, directed and filmed “41” and “They Walk Among Us.” The first documents Nicky’s life, art and fascination with the number 41. It tells the story of how the family believes they receive messages from Nick from the afterlife, often in the form of the number 41. The goal of the film – released in 2005 – was, and is today, to spread Nicky’s message of hope.

“They Walk Among Us” was a one-act play Nicky wrote in high school. It tells the story of a young man coming to grips with his homosexuality with the help of a guardian angel character whose characteristics closely resemble the author. After Nicky’s death, his family rediscovered the work, and found it to be prophetic. They have produced it as a staged reading, a fully produced play and as a film.

Both films take a horrific tragedy and try to help viewers heal and find peace. Both O’Neill and de Rezendes have had people from across the world tell them how the films have affected them in positive ways. Six years later, this means the films are still doing their work.

“I can say that if I hadn’t done these projects there wouldn’t have been a recovery for me from the tragedy. These things have been my therapy. It was annihilating what happened. These are the things we did, so we can continue living. We’re still going,” said O’Neill.

de Rezendes didn’t know Nicky’s family before the tragedy, but the film became harder to make as he became closer to them.

“It was a very trying experience,” said de Rezendes. “Getting to know someone, watching him grow up and then lose him. It’s almost like I lived it as I watched it.”

As artists, both feel that all forms of art can be seen as therapeutic. They hope these films are a gateway to a higher understanding and bring some form of healing to viewers. de Rezendes said art can bring any story to a new place.

Like McLaughlin, O’Neill wanted to do whatever he could after the fire. Nicky became O’Neill’s muse as he tried to open people’s minds to the mystery of where people’s loved ones are for eternity. Positive reactions from the films have been powerful for Nicky’s relatives knowing the tragedy is still lingering in the hearts of people across the globe.

Both movies have been shown in theaters and on WSBE Rhode Island PBS. O’Neill said these films will always be available and shown to audiences. O’Neill also has started a memoir about his brother.

“I think any art that comes out of this is wonderful and powerful,” said O’Neill. “People should keep doing it.”

In September 2012, the owner of the site of the nightclub donated the land for a permanent memorial. One month later, the state’s first memorial for Station victims was opened in Warwick. Jody King, who lost his brother, Tracy, in the fire, spearheaded the idea for the memorial remembering the 10 Warwick residents and the 90 others who lost their lives.

King recruited local architect Harvey Allen Wagner to design the memorial park. Wagner was on board immediately, and had a connection to the fire himself. His daughter-in-law was at nightclub, but got out safely.

For King, the park had to be recognizable, on a main street, handicapped accessible, and spotlight the 10 Warwick victims. From that, Wagner began sketching.

The city donated supplies and volunteers came together with the common goal of memorializing loved ones. Old acquaintances were renewed and new friendships bloomed as many worked together to create the park. After 28 days, the memorial was open. The park is striking with its plantings, paths, butterfly-adorned iron railings, 100 names in pavers and the granite tablet with the faces of nine of the 10 Warwick victims.

Wagner said he hopes it can brings some level of closure as people come to the beautiful area to reflect on their lives.

“It was one of the most wonderful projects I’ve ever worked on,” said Wagner. “It was a positive outlet…I felt I had to give something back. Something positive came from something so devastating.”

Gina Russo, a survivor of the fire, agreed with Wagner that from the tragic fire positive friendships and bonds emerged. Russo co-authored her story in “From the Ashes.” Her book chronicles her experiences before, during and after the fire. Russo lost her fiance, Alfred Crisostomi, that night. Art is powerful, and another way to disperse information, said Russo. She believes art can be educational in helping prevent a similar event from happening again.

Russo wrote the book for her own therapeutic purposes. The book’s goal is to show how life can be good, even after a tragedy. She said she has to believe those who survived, including herself, did so for a reason. With that in mind, she said she has become a better and stronger person because of the 100, whom she refers to as angels, whose lives were taken.

“If one person reads it and it changed their life in some way and lets them know you can be OK, then it was worth me putting my story out there,” said Russo.

The book helped Russo move forward, and she now educates others on the topic of fire safety, sharing her personal story. Boston University School of Medicine uses the book in its curriculum to talk about compassion with patients. Those affected have called her to thank her for a glimpse inside the club that night. The tragedy brought out a passion within Russo she didn’t even know she had. Russo said the book has done more than she ever thought.

“Art is an amazing thing, It brings people together,” said Russo. “We can stay together and continue this healing.”

"The Night the Music Ended," a book by Marilyn Bellemore