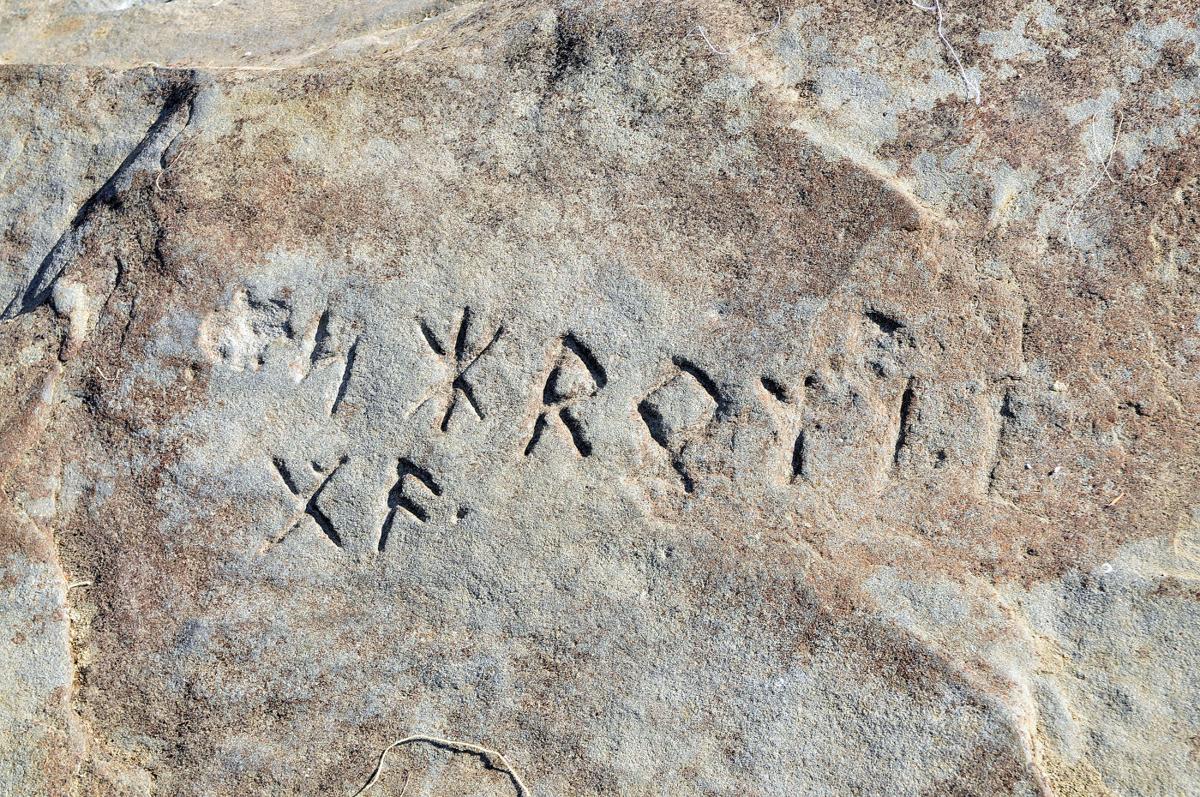 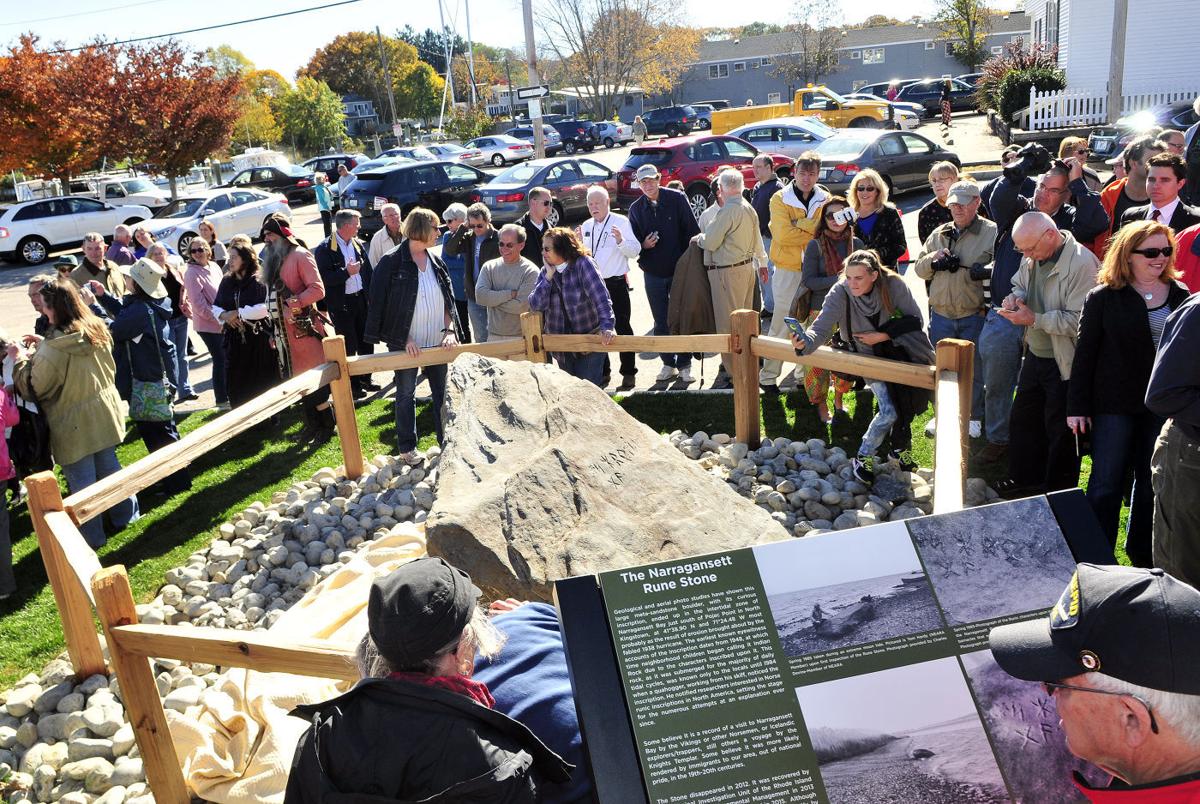 An international crowd gathers to get a look at the Narragansett rune stone during an unveiling ceremony held Friday at Old Library Park in Wickford. 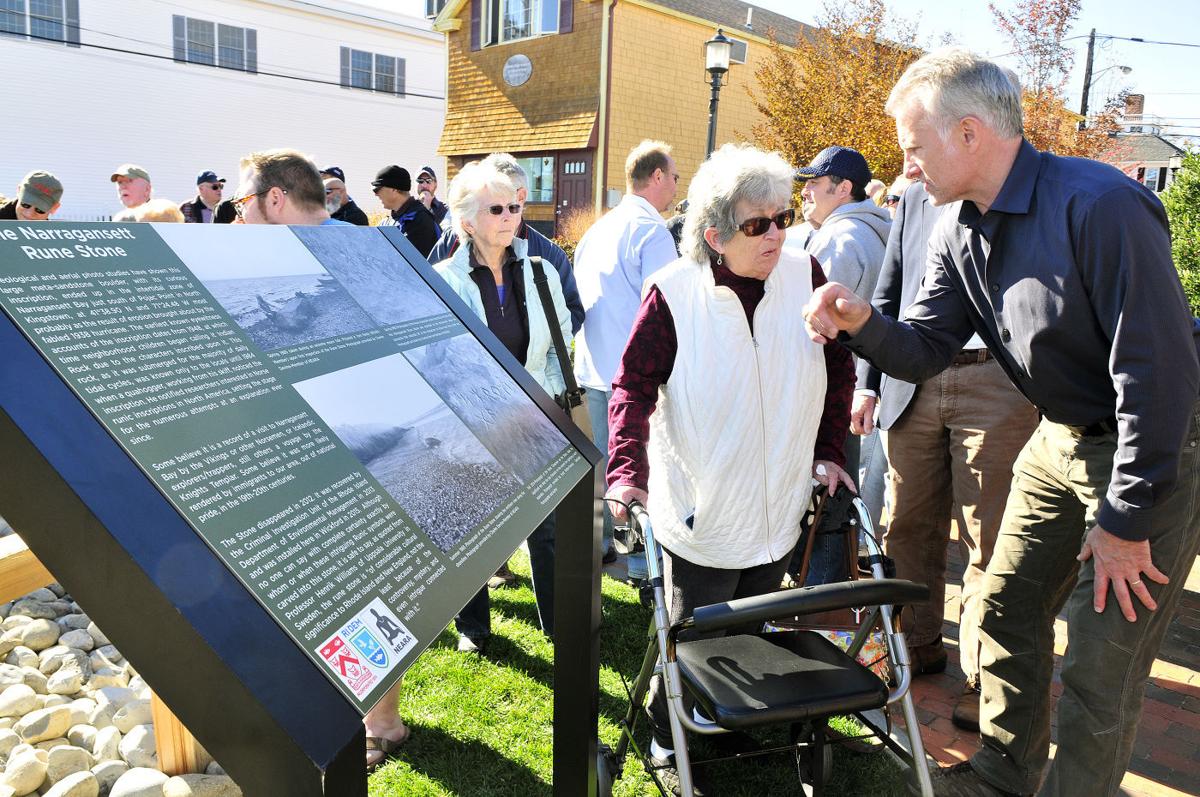 An international crowd gathers to get a look at the Narragansett rune stone during an unveiling ceremony held Friday at Old Library Park in Wickford.

NORTH KINGSTOWN — Fresh off a transatlantic flight, Valdimar Samuelsson of Iceland joined nearly 200 people in Wickford Friday for the unveiling of the mysterious Narragansett rune stone, an artifact he has studied and written about for several years.

The boulder had sat in the waters off Pojac Point for decades and the origin and meaning of its runic inscriptions have been the subject of fierce debate. Some believe they were inscribed by shoreline visitors some 600 years ago – possibly Vikings or Native Americans. Others dismiss that theory and suggest they were carved in recent decades as a hoax.

Samuelsson believes the carvings are the work of a lost colony of Icelanders from either the 14th or 15th century, and were used as a claim or boundary mark.

“Three of the runes are special Icelandic runes that were used in the 13th century,” he told The Independent after last week’s ceremony.

Along with Samuelsson’s book – “New Englands (sic) Narragansett Rune Stone. Was it the work of Icelanders?” – the 7-foot-long, 5-foot-high boulder also has been the subject of many articles and featured on programs aired on The History Channel.

In the summer of 2012, it disappeared, prompting an investigation involving the state Office of the Attorney General and the state Department of Environmental Management. An unnamed, disgruntled property owner, tired of curiosity seekers walking across his property looking for the enigmatic stone, had it sunk somewhere in the middle of Narragansett Bay.

It was retrieved in the summer of 2013 and was stored in a warehouse on the University of Rhode Island Bay campus for the last two years while state and town officials discussed its future.

On Friday, the stone was unveiled to the public more than three years after it disappeared. It is surrounded by a wooden post and beam fence and is accompanied with interpretative signage. The display is located behind Old Library Park, next to the Town Hall annex, 55 Brown St. and adjacent to the public restrooms in the town parking lot.

Final plans call for the rune stone to be placed in a “1950s-style” gazebo surrounded by a wrought iron fence and illuminated. The North Kingstown Town Council has allocated a budget of up to $15,000 for the project.

North Kingstown Town Historian G. Timothy Cranston was instrumental in bringing the stone to Wickford and served as the master of ceremonies for last week’s event. He didn’t offer theories, but said: “We do not know exactly who carved this stone. We do not know precisely what it says. But I can tell you this. I know what this thing is – I’ve thought about it a lot, I know what this thing is. It’s a Kilroy kind of a thing. It’s a bold fist in the air that says, ‘I was here.’”

Cranston hopes the stone will become an attraction, like Plymouth Rock, and offered a message to the residents of Massachusetts, “Pick up your Plymouth Rock and slide on over because Wickford, Rhode Island, and the rune stone are moving in.”

Town Council President Kerry McKay sees the display as one more piece of the puzzle of revitalizing Wickford village.

“The Narragansett rune stone is more than just an intriguing historic artifact,” McKay said. “We view the incredible interest in it as a wonderful part of the overall revitalization of our Wickford area.”

Along with the unveiling of the stone, John Goldman, owner of Green River Silver Co., unveiled custom jewelry inspired by the carvings. The silver earrings and pendants were handcrafted by Annabel Hunter and are are available at Green River Silver’s stores in Wickford, Bristol and Providence, as well as available online at greenriversilver.com.

For decades the enigmatic stone attracted visitors from across the country, piquing curiosity and stirring debate. Passionate debate over its origins persists and a consensus on who made the mysterious carvings seems far from reach.

According to a 1985 article in the New England Antiquities Research Association journal, the stone was first discovered by a quahogger in December 1984 as he was digging in the mud flats. The stone was located roughly 60 feet off shore and was visible only during extreme low tide. Researchers visited the site and documented their findings of 10 runic-looking characters carved into the stone – eight on one line and two just below.

In that article, Charlies M. Devine wrote he believed the writing was in the form of “Vulgar Latin” and read, “Registered Boundary Line. The Owner.” Photos of the inscription were given to O.G. Landsverk, author of “Runic Records of the Norsemen in North America,” and promoter of cryptographic messages concealed in runic carvings. He suggested the inscription “appears to be a genuine Norse runic carving.” He noted however: “[We] have been unable to find a hidden date in your inscription. It is my belief that it was carved by someone who tried to imitate similar runic inscriptions which do have concealed dates.”

In an article in the NEARA journal in 1991, writer Suzanne Carlson suggested the writing was Icelandic and translated to “screaming river” while another suggested translation is “Four victorious near the river.” In a 2012 article, Dr. R.M. de Jonge of the Netherlands said the carvings were made by Icelanders in 1423 and offered this translation of the runes: “GIFT of the SUN: RHODE ISLAND (Red Land), now HOME (property) of the MEN across the OCEAN from ICELAND; GIFT of GOD”

Scott Wolter, a forensic geologist and host of The History Channel’s “America Unearthed,” contends the stone was carved in the 1300s by the Knights Templar as part of a map in the region, and has ties to the Newport Tower. He also was in attendance for last week’s ceremony.

In a bizarre twist last year, Everett Brown of Providence claimed he carved the runes in the stone when he was a teenager in 1964. His claims were swiftly refuted by long-time residents who contacted The Independent and signed affidavits stating they had seen the rune stone well before 1964.

Rod Mather, professor of maritime history at the University of Rhode Island, was initially contacted by investigators to offer his thoughts and insights on the boulder. In an interview with The Independent last year, he said it was difficult to determine the origins or meaning of the inscriptions, but suspects they were made at some point during the late 19th century. He was quick to dismiss theories the inscriptions were a hoax or carved by Vikings.

“Even if we had the money or the time to look into it more and try and get to the bottom of this whole thing, there would still be people that would doubt the findings, whatever they might be,” Mather added.