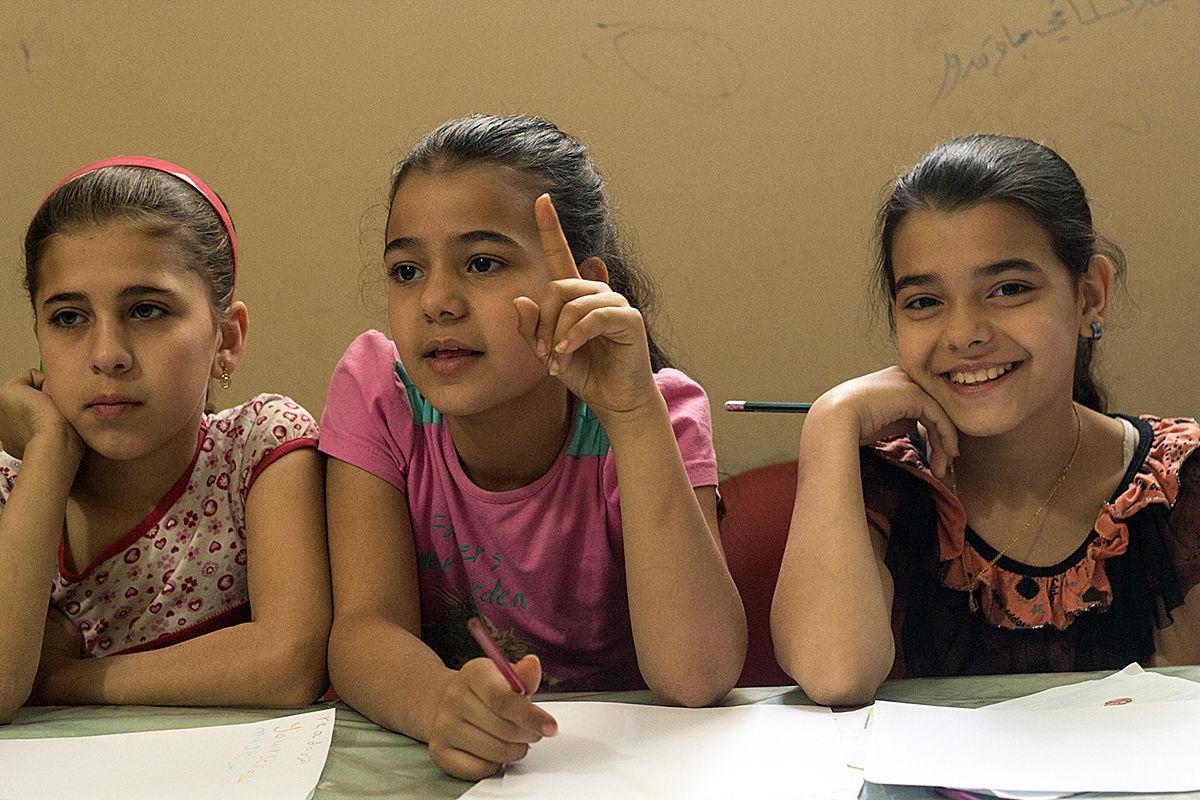 A Wakefield woman is holding a fundraiser for Syrian refugee students of the Nour Education Program in Beirut, Lebanon. Pictured above are some of the students in the program. 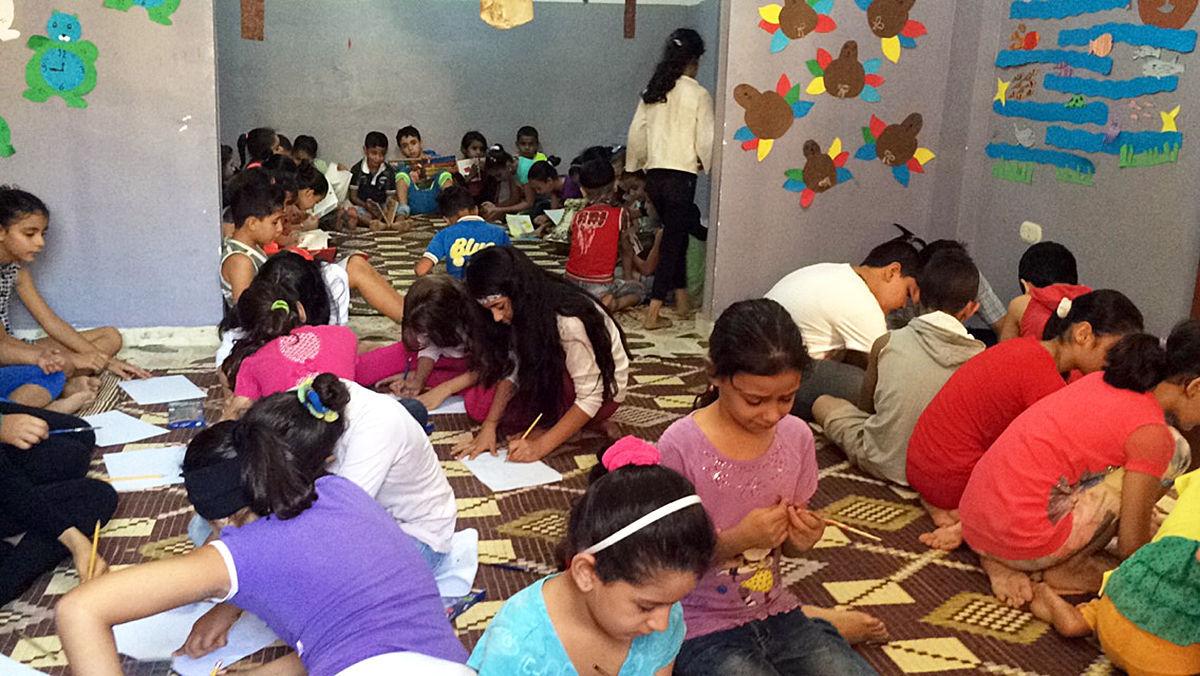 A Wakefield woman is holding a fundraiser for Syrian refugee students of the Nour Education Program in Beirut, Lebanon. Pictured above are some of the students in the program.

Katie Jones grew up in Wakefield, where she developed a sense of community. But she sees community building and awareness on a global scale. Having spent the past four years in Beirut, Lebanon, Jones has developed a very tangible passion for, and grassroots approach to, providing aid to those who need it so desperately – like these women and children fleeing violence in war-torn Syria. Her experiences with the Nour Education Program, helping to develop a school for refugees at Burj al-Barajneh refugee camp in Beirut, have given her a first-hand look at the challenges and struggle refugees in the sprawling camp face. But where some might see hopelessness and despair, Jones envisions hope and the potential for real change.

On Sunday, Jones will give a talk at Unitarian Universalist Congregation of South County in Peace Dale about the camp and the victims of the Syrian conflicts, and outline the successes and achievable outcomes of the Nour Education Program.

After college, Jones spent two years at American University of Beirut, studying education systems in the Middle East and Arabic, and working at a non-governmental organization for Lebanese youth, Jones has dedicated two more years to teaching history at American Community School. A day before the Nov. 15 terror attacks in Paris, Jones was in Beiruit when twin suicide bombers struck the entrance of the Burj al-Barajneh refugee camp, killing 37 people and wounding as many as 180.

“The bombing was quite close to one of the [United Nations] schools that serves Palestinian refugees and we [at the Nour Education Program] had partnered and worked with that school,” Jones said. “I knew exactly where it was, their kids and their families were right there. The street that was bombed is a busy street with restaurants, bakeries and shops. And the chances are pretty high that you know someone that was affected.”

The Burj al-Barajneh camp covers one square kilometer and, while originally established in 1948 to harbor 10,000 Palestinians displaced by conflict with Israel, it is now home to as many as 30,000 to 40,000 people seeking refuge from strife on the region. Jones noted that “no one knows the exact numbers of Palestinians and Syrians,” because of political restrictions on census-taking and proportional representation in the majority Christian government. The camp was demolished several times during periods of conflict, structures riddled with bullet holes, spiderwebs of dangerous electrical wires, and dilapidated houses built on top of each other. Jones described “buildings that have never been repaired, electricity that is only on three hours a day, and with no potable water, residents must buy bottled water from outside of the camp.”

While some refugees receive aid from the United Nations, many rely upon agencies that serve the camp, like Nour Education Program. The program, named for the Arabic word for “light” or “hope,” is run by “an incredible team of Palestinian and Syrian women from the Women’s Program Association, a community center in the camp focused on the empowerment of women and children,” Jones said. Founded in 2014, and originally funded entirely by a small town in Massachusetts, the education program has expanded to serve 110 Syrian and Syrian-Palestinian students, ages 6 to 14 who would not ordinarily be able to attend school.

According to a fundraising website for the school, “students attend classes five days a week with two teachers in a classroom with no furniture. Many also attend optional English classes on Saturday. For many of these students, this is the only school they can attend, as they are not eligible to attend UN schools in the camp and there is no place for them in the Lebanese public school system. The students also are at very different levels. Some do not know how to read or do basic math because they have missed so much school due to the Syrian civil war.”

“The problem is pretty overwhelming. One in four people is a refugee, 75 percent of kids aren’t in school,” Jones said. “Here’s a school that both offers a safe space and education but also offers a component of trauma. It’s all totally locally run, totally organic, it’s such an amazing opportunity to support.

“Lucia Mock, a councilor and volunteer from Falmouth, Massachusetts, and I work very closely with Miriam, a Palestinian woman who runs the school, and we’re trying to help scale-up the school,” Jones said. “That’s part of what this fundraiser is for. They need heaters and furniture so the kids can actually have a place to learn. I work with the teachers and bring them to the American Community School to give them real educational experience. They shadow Lebanese and American teachers and they’re working with literacy coaches. We’re working with them to develop their curriculum so they can build that up, as well. So while my students from the AMC teach the English classes, Lucia and I plan out how to strengthen the actual school.”

“If you give $50, that buys two desks or buys a heater. Even a little bit makes it all the more easier for them to learn,” she said. “They’re trying to hire a new teacher who is a social worker. She would be expanding the number of kids they are already working with.”

The contributions and aid can have a lasting impact on the students and the school and foster substantial ties between people.

“It’s a beautiful idea to have communities here supporting a community there,” she said. “Not as poor people but as actual equals. I am hoping in the future to keep working on this and make it a little more institutionalized. I love this work and I love planning out how to scale this school but I really enjoy getting to know these kids and watch them grow.”

Jones’ talk will be held Sunday at 11:30 a.m. in the Unitarian Universalist Congregation of South County sanctuary, 27 North Road, Peace Dale. Donations may also be made online at generosity.com/ education-fundraising/ burj-al-barajneh-children- s-education-program.

South County Youth Soccer Club is collecting new and gently used soccer balls and jerseys to be sent to Syrian refugee children in Jordan, in partnership with Change is Me International.

Donations may be dropped off at the home of Lynne Moretti Harper, 31 Kenyon Ave., Wakefield, Saturday from 9:30 a.m. to 2 p.m.

The goal is to give the gift of play to children who have been displaced and robbed of a normal childhood.