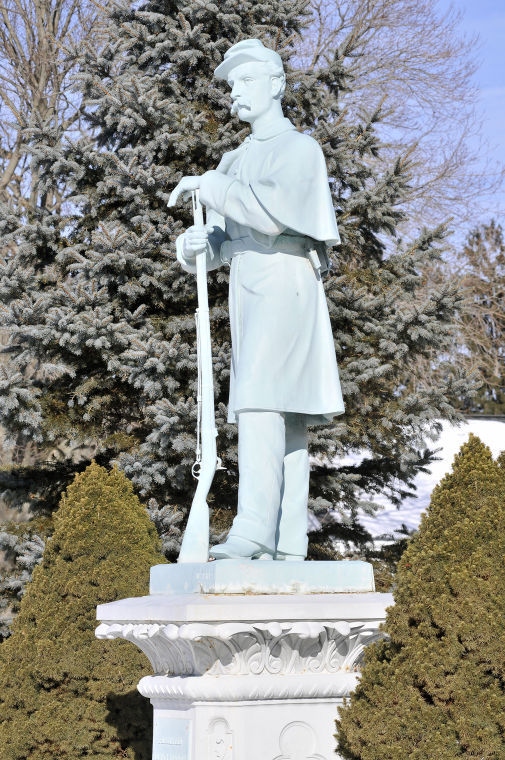 A Civil War statue in front of North Kingstown Town Hall, 80 Boston Neck Road, North Kingstown, is a well preserved example of work by J.W. Fiske & Co. The statue was moved to the site in the late 1930s when a train station across the street from Town Hall was demolished. 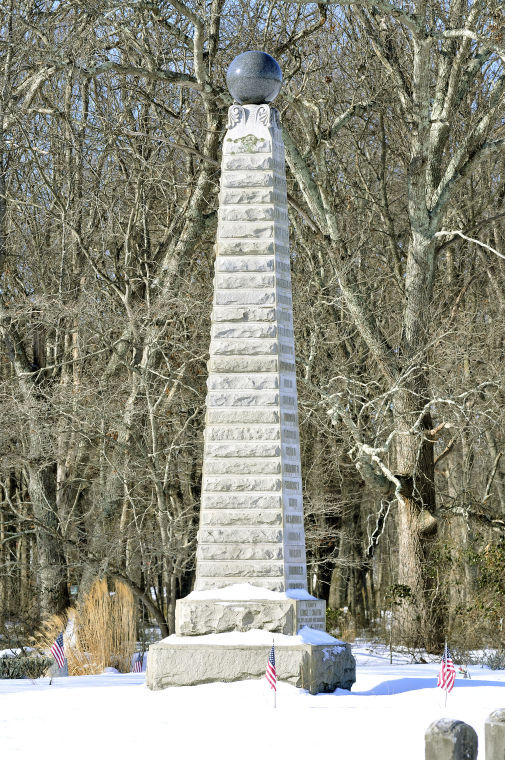 A Civil War statue in front of North Kingstown Town Hall, 80 Boston Neck Road, North Kingstown, is a well preserved example of work by J.W. Fiske & Co. The statue was moved to the site in the late 1930s when a train station across the street from Town Hall was demolished.

Seeing as this spring will mark the kick-off for the state of Rhode Island’s Civil War Sesquicentennial celebration, a fancy name for 150th anniversary, I thought it might make sense to stop for a bit and examine the two fine monuments we have here in our fair town that commemorate the great war between the states.

The first and most imposing of these is the Grand Army of the Republic monument in Elmgrove Cemetery. The Grand Army of the Republic, known most often as the GAR, was an organization akin to today’s American Legion; it was a fraternal organization specially set up for Civil War veterans. The monument, intended to honor the memory of the state’s grand commander George T. Cranston, was constructed in Westerly in 1898, of light gray Westerly granite and was dedicated in a grand ceremony on Memorial Day of that same year. It stands more than 25 feet tall and is composed of a base and 26 separate blocks of granite, each engraved with the name of one of the GAR posts in the state, including of course North Kingstown’s C.C. Baker post.

The highly polished black granite globe at the summit of the monument is said to weigh almost half a ton. It’s fairly obvious why this monument holds a special place in my heart; George T. Cranston, the man I am named after, was not only the state commander, he also was the state senator most responsible for the creation of Rhode Island’s Veteran Home, originally located here in town and then later moved to its present day location in Bristol. As a young boy, I often “rode shotgun” in the hearse for the family funeral home just to keep my dad company. Invariably, I would eventually wander off from the numerous funerals I attended and my father always knew where to find me, right in front of this monument staring at my name carved in the fine Westerly granite.

The local C.C Baker chapter of the GAR also is responsible for the wonderful Civil War statue in front of Town Hall. This statue of an “everyman” Civil War soldier was installed in 1912, and was actually the last official act of the chapter, which by then had dwindled to just a few elderly members looking for an appropriate and meaningful way to utilize the contents of the chapter’s treasury. A committee consisting of William G. Saunders, William Weinreich and Reuben Secor purchased the statue from the J.W. Fiske & Co., the most prominent manufacturer of decorative statuary at that time. It was actually originally installed across the street from Town Hall adjacent to the train station that was located there and it, at the time it was installed, included a water feature with decorative troughs on either side for birds and even an occasional horse to drink from.

When the station building was demolished in the late 1930s, the statue was relocated to the front yard of Town Hall where it stands today. North Kingstown’s statue, one of hundreds forged by the Fiske company during the period, is in exceptionally good shape, and the 112-year-old statue has been visited many times by representatives from other communities in the United States with Fiske statues of their own they are planning to restore. Indeed, North Kingstown’s Civil War soldier also can be found on the Smithsonian Institution’s website listing of outdoor decorative art as the finest example of this type.

The final national meeting of the GAR occurred in August 1949 in Indiana. The 17 remaining members of an organization, which once numbered nearly a half million, gathered one last time more than 80 years after the war had ended. And then, just like that, an era ended.

The war and the men who fought it were brought back to the forefront 50 years ago with its centennial celebration. Now, 150 years after the “Great War” ended, we will pause and ponder all it meant, and still means, once again. From time to time this spring, summer and fall, I’ll feature the Civil War and its impacts on North Kingstown in this column. In the meantime, stop by and pay your respects at one of these impressive monuments to those “Boys in Blue.”

G. Timothy Cranston is North Kingstown's town historian. The views expressed in this column are his own.