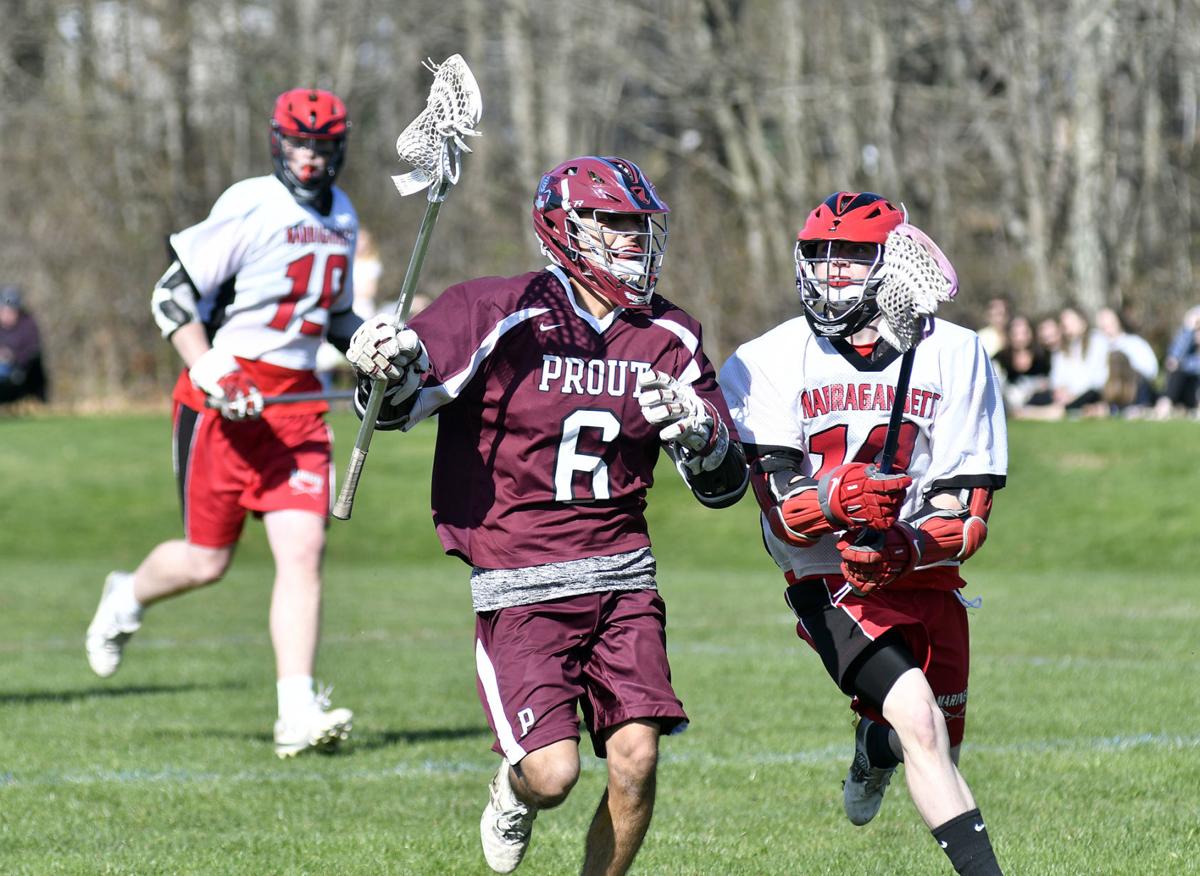 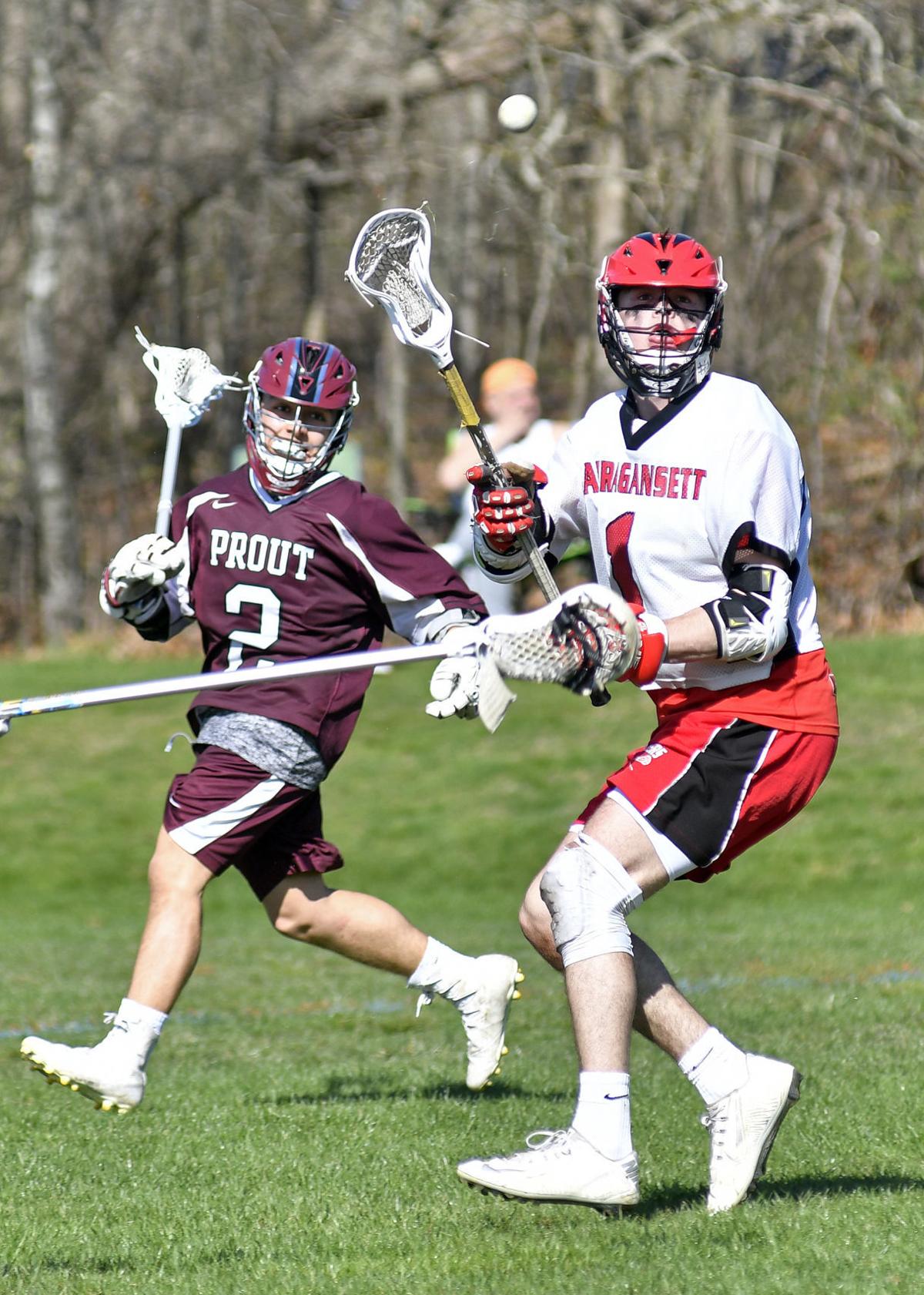 NARRAGANSETT — The Prout School boys lacrosse team is making headway and earned something to show for it Tuesday. On the heels of three straight losses – two by one goal – the Crusaders topped Narragansett 13-9 at Christofaro Park.

The Crusaders moved to 3-4 in Division II while Narragansett dropped to 3-3.

The Mariners are in the midst of their best start in several years – they finished 2-11 in 2016 and 1-12 last year – but couldn’t get over the hump Tuesday. After battling from a 3-0 deficit to tie the game late in the first quarter, the Mariners gave up five consecutive goals in the second quarter as Prout took control. They couldn’t get closer than four goals the rest of the way.

Prout was the D-II runner-up last season, but lost seven starters to graduation and has its few returning players in new roles this year. There was success early as Prout won two of its first three games – and lost a close one to undefeated South Kingstown – but trouble started with a 12-11 loss to Wheeler April 20. The Crusaders also lost 8-3 to Mount Hope April 24. Last week, unbeaten Middletown won a rematch of last year’s D-II championship game by a 16-15 score.

“Our starting goalie got in a little trouble with grades so he sat. And then our backup goalie went on spring break. So one of our captains stepped up and played two games back there,” Madeira said. “We’re starting to jell as a team. One of our problems was we had seniors who felt like they had to take it all on themselves. Then you saw today, they’re moving the ball a little better and boom. Funny how that works. You move people off their spots, good things happen.”

Jacob Moniz, Colin Bois and Dan Caramadre staked Prout to a 3-0 lead Tuesday. Narragansett surged over the final two minutes of the first quarter, getting goals from Christian Bourbonnais, Gabe Wooten and Austin Pratt to tie the game.

Throughout the game, Narragansett’s Jack McGreen dominated the face-off circle, but the Mariners often failed to capitalize on their possessions. Prout goalie Terrence Carbon helped the cause with 18 saves, and the Prout defense led by Mitchell Lindley, Nick Hart and Ryan O’Donnell regularly forced turnovers.

“Jack McGreen is a very good player. We have a face-off guy that’s 85 percent all season and he got owned today by him. He was a little hurt today, but I think Jack was just good,” Madeira said. “We tried to recover the best we could with transitional stuff, but it’s a learning process and they’re getting better.”

The Crusaders turned all the defensive stops into offense. Connor Bois had two goals, while Caramadre, Colin Bois and Charlie Madeira tallied one each in the big second quarter.

The teams traded goals in the third quarter, with Madeira scoring two and Connor Bois netting one for the Crusaders. McGreen, Atticus Duncan and Charles Ruth scored for Narragansett. The Mariners got within four on a goal by McGreen early in the fourth quarter, but Caramadre and William Curran answered to keep Prout in control. Gavin Carey scored a pair of late goals for the Mariners.

Madeira, Caramadre and Connor Bois each tallied hat tricks for the Crusaders. Moniz added a goal and four assists. McGreen and Carey led Narragansett with two goals apiece, while Wooten had a goal and three assists. Ryan Maciel made 17 saves for the Mariners.

Prout is back in action today against Coventry while Narragansett hosts South Kingstown Friday.