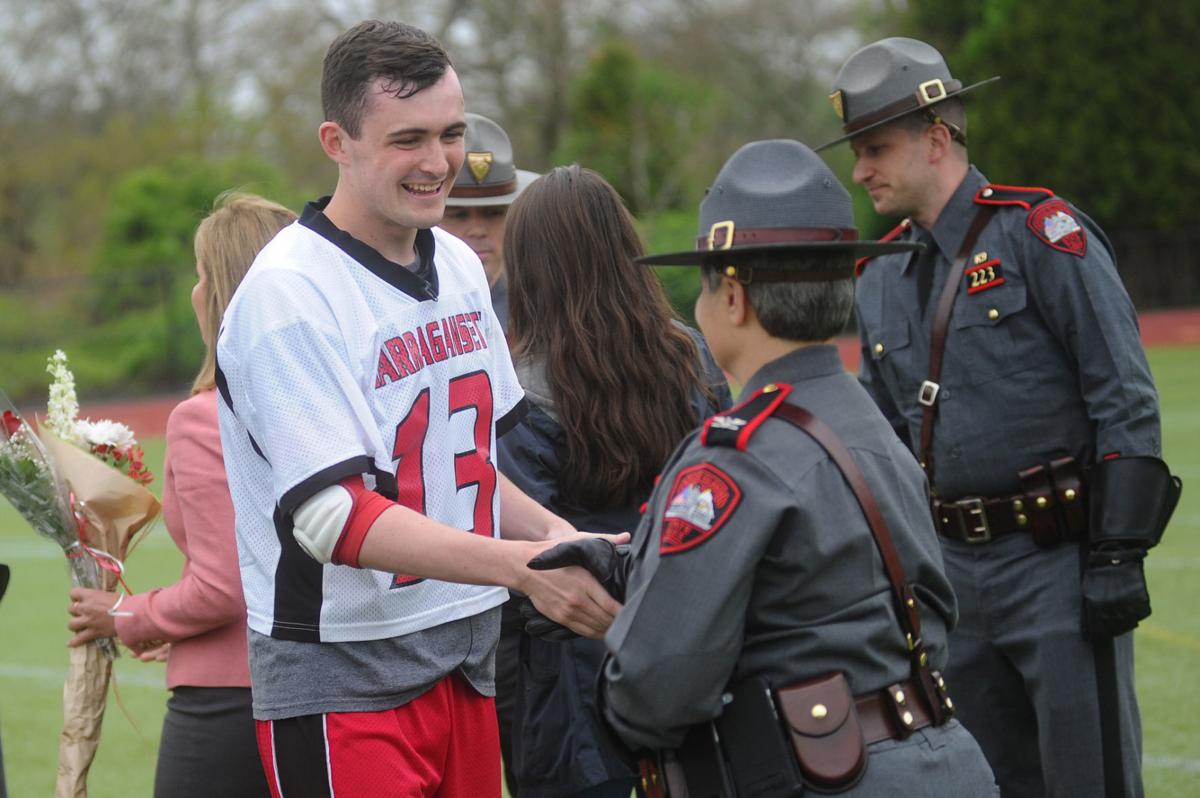 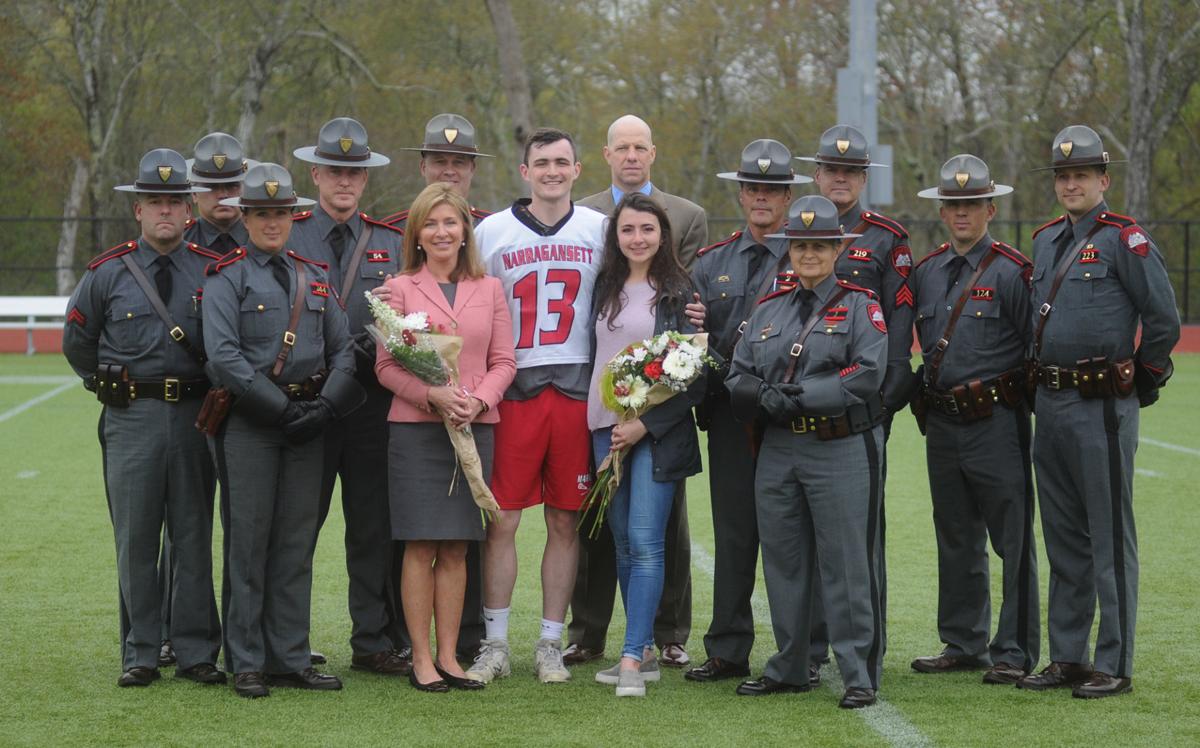 Narragansett High School senior Matt Ryan, center, poses for a photo with his mother, Maggie, and sister, Sarah, during a Senior Day Ceremony Thursday afternoon. Also with the Ryans are Rhode Island State Troopers, who were on hand in honor of Matt's father Richard, a former trooper who passed away in 2012.

Narragansett High School senior Matt Ryan, center, poses for a photo with his mother, Maggie, and sister, Sarah, during a Senior Day Ceremony Thursday afternoon. Also with the Ryans are Rhode Island State Troopers, who were on hand in honor of Matt's father Richard, a former trooper who passed away in 2012.

NARRAGANSETT — An emotional senior night ceremony on the basketball court got Abby Hummel thinking. She watched Matt Ryan and his family – and plenty of people in the stands – wipe away tears. They were thinking about who wasn’t there, and she started wondering about who could be there.

Four months later, 11 Rhode Island state troopers were side by side with Ryan and his family for another senior night.

“It meant the world to me,” Ryan said.

His father, Richard, was a decorated lieutenant in the state police before he died in 2012 after a five-year battle with cancer. Matt was 13 years old. His sister, Sara, was 15. The difficult times that followed were always buttressed by support from the state police and the Narragansett community, and, for Matt, by his exploits on athletic fields and courts. He’s been a captain in football, basketball and lacrosse for Narragansett High School.

“They were with us all along the way,” Ryan said of the state police. “Whether we needed someone to talk to or someone to go out to eat with, they were always willing to help. They would bring us dinners and drop off flowers around the holidays.”

Thursday, the state police support, the community efforts and Ryan’s athletic success all came together for a special moment. The troopers greeted Matt and Sara and their mother, Maggie, as they walked onto the field for the Mariners lacrosse senior night. They marched a few steps behind, 11 troopers subbing in for one of their own.

“It was awesome,” Matt Ryan said. “Definitely a lot of emotions. I can’t even describe it. I never would have expected for it to happen, that they would all come down to do this. It was really special.”

The event was a product of the same community support that has been there all along, sparked further by the man Ryan has become. Hummel, an instructional assistant and the assistant athletic director at the school, describes Ryan as the type of student athlete every coach dreams of. On his basketball senior night, she was struck by the moment.

“I’ve been thinking about this since his basketball senior night when his coaches addressed the fact that his father wasn’t able to attend – seeing all of the emotion it brought to not only him, his mother and sister, but the crowd,” Hummel said.

She ran an idea past athletic director Matt Mahar and checked with Ryan, who said he loved it. He expected one or two troopers to come down, but once Hummel reached out to contacts in the state police, and word started to spread, the idea took off.

Corporal John Gadrow, a close friend of Richard Ryan, had worked with Matt on his senior project training Gadrow’s 6-month-old black lab in police K-9 drills. He volunteered to join in. Others followed, including Col. Ann Assumpico, the superintendent of the state police.

“All the troopers that came today have a story about something that Rich did for them,” Gadrow said. “He’s a very special guy. We were all lucky to have him in our lives.”

Gadrow recalled the night before he joined the academy, when Richard Ryan showed up at his door at 9:30 p.m. to make sure his gear was packed correctly.

“It was the gesture that meant a lot,” Gadrow said. “He had encouraging words for me – don’t quit and don’t quit, basically. I wouldn’t be here today without his friendship and mentorship.”

Assumpico was one year behind Richard Ryan in the state police academy and worked closely with him on the job. She got to know his family, as well.

“We were very close and he was close with a few of us on the job. It really hurt us when we lost him,” Assumpico said. “He was a good family man and his family has done well. I know Rich would be extremely proud of his son today.”

There would have been many proud moments along the way. Matt was the unquestioned leader for the Narragansett football team, a key part of this year’s Division II champion basketball team and a captain for the lacrosse squad.

“He’s awesome. He’s one of those guys you never have to worry about,” lacrosse coach Mark Chafee said. “Great kid. He plays hard. Great leader.”

“Watching Matt grow up, he’s become almost exactly like Rich,” Gadrow said. “He’s such a polite, articulate, successful kid. He really is a carbon copy of him.”

After graduation, Ryan will study criminal justice at the University of Rhode Island, with eyes on potentially following his father’s footsteps and joining the state police.

“If he’s anything like his father, he’s going to have everything in place,” Assumpico said. “He’ll have a plan – he already does. But he’ll make his own way, he’ll get his own badge. And that’s the way I’m sure Rich would have wanted him to do it.”

“It was always in the back of my mind,” Ryan said. “It bothered me a little bit because I saw other kids going out there with their parents. They probably aren’t thinking about how lucky they are. It meant a lot having them with me today.”