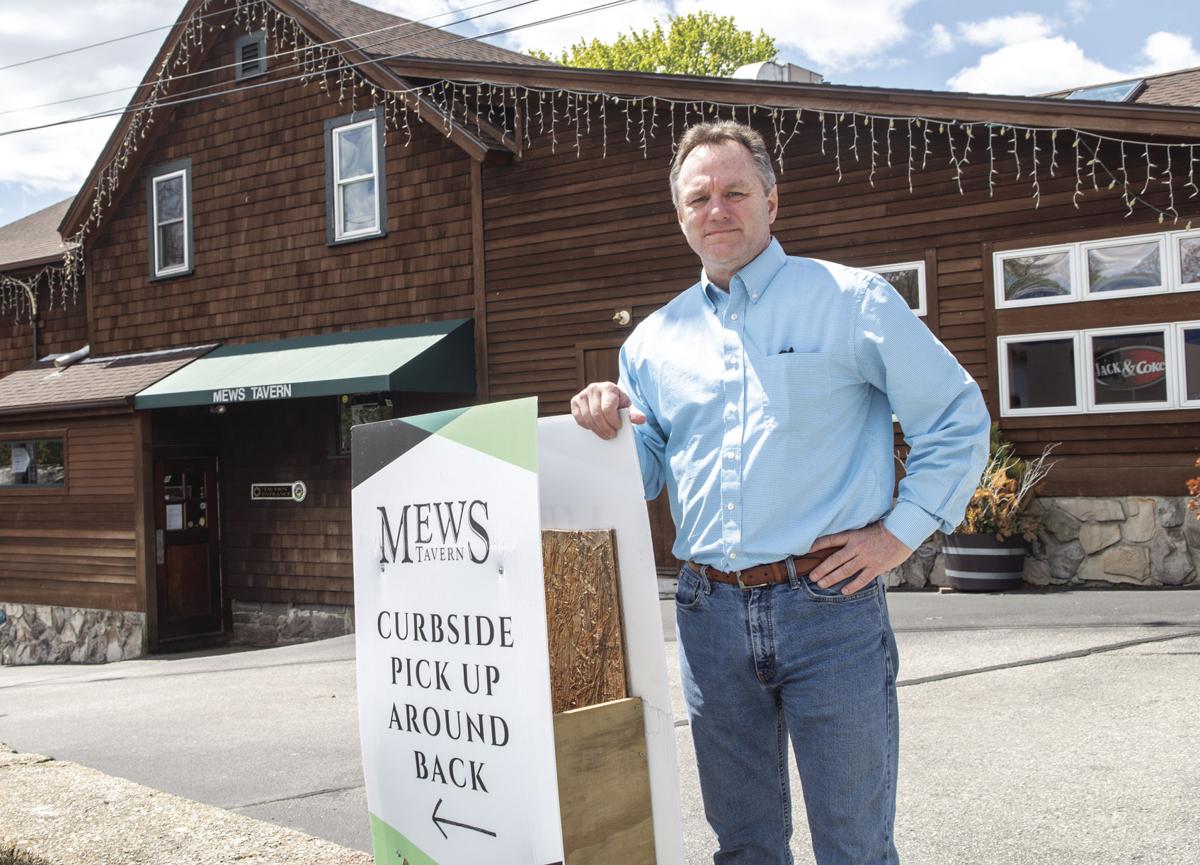 George McAuliffe, the business manager at The Mews Tavern in Wakefield, is pictured in front of the restaurant on May 12. Although the state will soon allow restricted outdoor dining, McAuliffe said the restaurant is not currently prepared to offer those services. 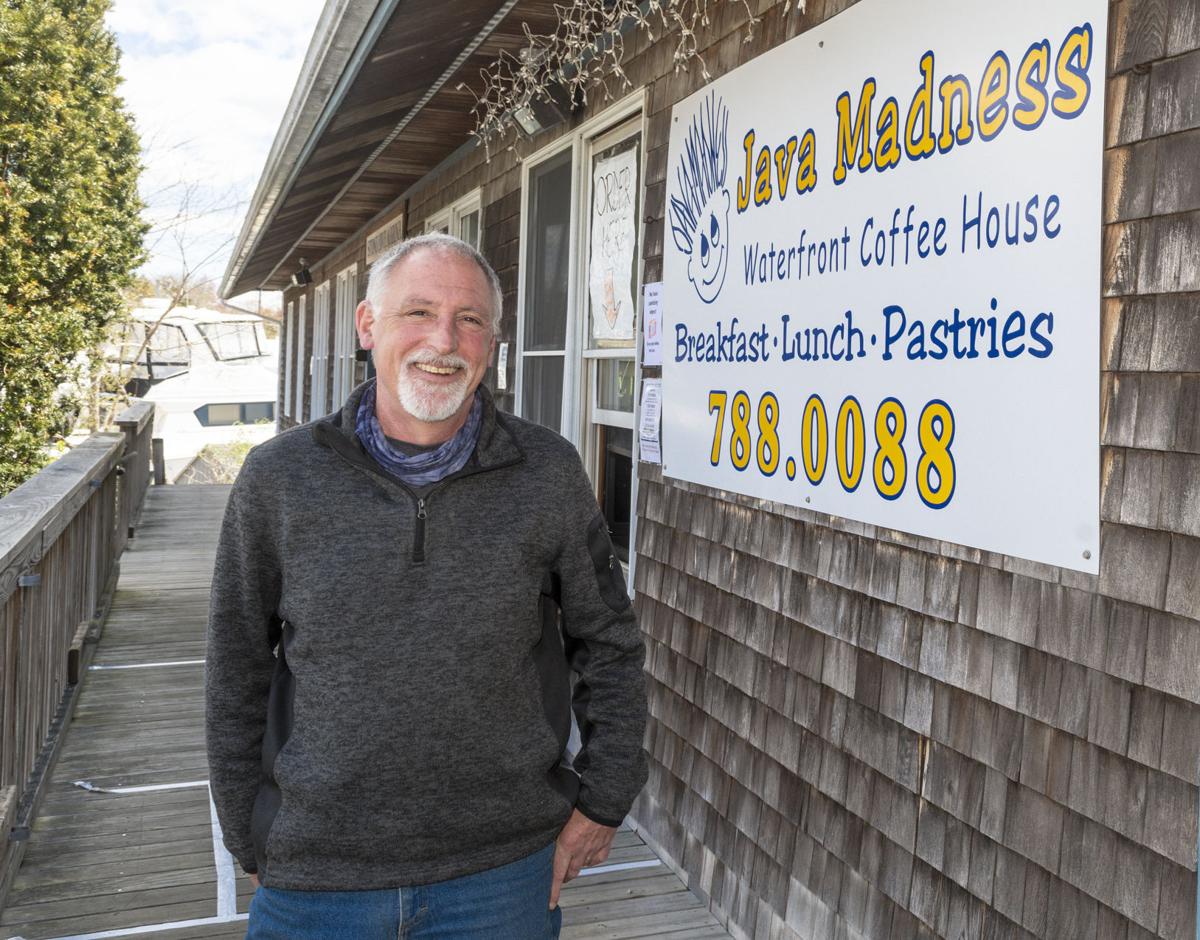 Mark LaHoud, owner of Java Madness in Wakefield, is pictured on the coffee shop’s deck.  He said he is looking into the possibility of serving customers on the deck under recently-eased regulations regarding outdoor dining.

George McAuliffe, the business manager at The Mews Tavern in Wakefield, is pictured in front of the restaurant on May 12. Although the state will soon allow restricted outdoor dining, McAuliffe said the restaurant is not currently prepared to offer those services.

Mark LaHoud, owner of Java Madness in Wakefield, is pictured on the coffee shop’s deck.  He said he is looking into the possibility of serving customers on the deck under recently-eased regulations regarding outdoor dining.

SOUTH KINGSTOWN, R.I. — George McAuliffe, business manager at the popular Mews Tavern on Main Street in Wakefield has watched the Coronavirus’s economic affects shrivel revenue while bills multiply and employees get laid off.

He, along with owners Dan Rubino and Dave Barnes, had to decide nearly overnight two months ago whether to start curbside food service — now available — that was never previously offered.

“It was difficult, the building doesn’t accommodate it, it’s not close to serving facilities” and was just a major headache, McAuliffe said. Now Governor Gina Raimondo’s new set of strict rules this week for outdoor dining have just made that headache worse, McAuliffe added.

“The state has had eight weeks to think about the issue and a plan forward. It’s been disappointing on our end due to the lack of any guidance” until now, leaving the restaurant little time to plan for a May 18 removal of a state ban on any dining except take-out or curbside pick-up.

He said that a state plan for other kinds of businesses came first and “if they could put a plan together for that why couldn’t they put together a remotely detailed plan for restaurants so that when it occurred, this is what it will look like. They had nothing,” he said.

His frustration was echoed by other South County restaurant owners, but some were pleased about new al fresco dining rules announced this week.

Fresh cash flow is needed for these businesses to survive, they said.

Some plan to sprint to meet requirements and avoid delays for opening outdoor dining next week. McAuliffe said he’s unsure about outdoor dining at the Mews.

It’s been an extraordinary tough two months for South County restaurant owners whose profit margins normally sink in the winter as tourism wanes. Earnings rise again in the spring through the autumn as tourists and day trippers provide the foot traffic they need to keep the business afloat.

With the coronavirus sickening people, the public reaction to it, state officials’ restrictions to stop its spread and no full recovery date yet ahead, forecasts for a fall virus resurgence hold possibly more bad news for them.

These leave business owners weary and scared about their own and others’ businesses failing from being chained to inescapable intermingled economic drivers for the South County region.

“Even if we are able to open up physically, are people going to come? We can’t determine that either. What are we supposed to do?” asked McAuliffe.

Concerns are similar at the Java Madness coffee house fronting Salt Pond at 134 Salt Pond Road. Mark LaHoud has been the owner for several years after leaving Cambridge, Mass., for South County.

He, too, has faced lost revenue. The shutdown orders took away indoor seating that reduced business significantly, notably in the afternoons, he said, as well as having to lay off staff and having unsold pastry, bagels and other food spoiling after indoor seating stopped in March.

“Overall we’re down about 75 percent from where we expect to be and we’re concerned about summer business. In the past, the summer is what made Java viable,” he said this week.

Giving the restaurants — and their homebound patrons — some glimmer of hope, the governor Monday issued a four-page, single-spaced, strict policy that broadened dining options to include outdoor venues.

In addition to curbside and takeout, outdoor service is hoped to give respite to restriction-burdened owners and customers. A further announcement in two weeks on allowing limited indoor is expected.

Included in the new policy is a 100-person limit for outdoor eating with no more than five people seated at tables. These tables must be eight feet from each other and no more than 20 such tables are allowed per restaurant. Distances could be slightly less if some kind of glass or plastic dividers are used.

The policy also requires reservations — no walk-ins — and screening for illness by self-checks, staff questions at the restaurant door and temperature-taking stations if a business wants them.

In addition, other requirements include:

All self-service food stations, such as salad bars and buffets, are prohibited.

Salt, pepper, salad dressing other condiments can only be provided by individual packages or cups, unless sanitized between each use.

Only paper menus, digital, electronic, whiteboard, chalkboard menus or reusable menus can be used and must be sanitized after someone a customer touches them.

Utensils and dishware must be disposable and discarded between parties or sanitized and replaced after each use. Utensils should be rolled or packaged.

Self-service drink refills are not allowed. Any drink refill must have a clean glass or cup sanitized between use or new ones each time.

Establishments shall maintain for contact tracing both an employee work log and also retain names and contact information for customers making reservations. It must be kept for least 30 days and provided to the state upon request.

The governor, in a statement, addressed the issue that some restaurants may remain closed while others try al fresco.

“We know some restaurants won’t want to reopen with outdoor dining and that’s fine; others don’t have outdoor space and will want to explore the use of their parking lots, nearby parks, sidewalks and even streets for this purpose,” Raimondo said.

“A good number of restaurants feel it may not be worth the investment of outside furniture and protective barriers when compared to the limited revenue and potential re-closure by the state,” he said, noting that they prefer some lessening of indoor restrictions.

Kevin Finnegan, owner of the Ocean Mist and other Matunuck and Block Island restaurants, said immediately he will do outdoor dining.

“The corona disease is something we need to worry about, but the economic disease that is coming if we don’t open up in a safe, healthy fashion is going to be more devastating to everyone’s health and well-being more so,” Finnegan said.

He said he has lost about $2 million among all his business and has had to lay off employees.

“If a Walmart can open up with a hundred people or a Belmont (Wakefield food market) or whatever...right now everyone is essential to moving forward if you do it in a reasonable and safe way,” he said.

In Narragansett’s Point Judith fishing village of Galilee, where the Block Island ferries shuttle thousands of people weekly during the summer, travelers and day trippers often go to nearby George’s waterfront restaurant.

Since 1948 it has been in the family of Kevin Durfee, the current owner. He said he’s ready and prepared to start outdoor dining.

“We’re doing everything she (Raimondo) is requiring for outdoor dining. We’re doing it now anyway for curbside and takeout. We’re one of the fortunate places that have plenty of places for people to sit outdoors,” said Durfee, adding that his profits have also taken a “big hit” due to the closing of indoor dining.

For a smaller wait-in-line only business like Lahoud’s coffee shop, he said regulations requiring a reservation for any outdoor dining could pose problems. He already has picnic and bistro tables, which overlook the Salt Pond, that can be rearranged.

“Bottom line is nobody is going to make a reservation for coffee and a bagel,” he said, adding that this requirement could drive business away from his establishment.

These and other issues with a fast ramp-up now that the green light has signaled could have been avoided if the state has provided more help and more direction sooner on outdoor dining as well as financial assistance, the business owners said.

Raimondo has frequently reiterated during her press conferences that re-opening for business will be a slow process to test containing the virus spread and will be a process that will not satisfy everyone.

“I really don’t understand why a restaurant or any small business at this stage of the game cannot just open with employees and guests wearing facemasks, socially distancing properly, handwashing and sanitizing. Why can’t we just do that?” asked Durfee.

He also criticized the governor for putting the restaurants in a “Big Brother” position of reporting to the state on personal information about people patronizing their businesses. He also said she is inconsistent in its use.

“Why on earth does a restaurant have to go through this rigmarole to get all this information from a guest when the governor’s National Guard doesn’t even get it at T.F. Greene airport when people are flying in. I know it doesn’t happen,” he said.

Restrictions, conditions and requirements are all unnecessary micro-management from state government, Finnegan said. “I think any governor should manage down to a certain point and then trust the business community and let us do the rest,” he added.

Looking at the overall picture, Lahoud said,  the state should “focus on true small businesses and ensure that relief funding prioritizes them.”

It always comes down to profit and loss, McAuliffe said, to stay alive.

“From a restaurant standpoint, there’s been absolutely zero guidance. Just because you can serve people doesn’t make it worthwhile. You have to make money. We’re not doing this to just break even. If we lose money doing it, it doesn’t make any sense,” he said.

Do you believe the state has done enough to increase coronavirus testing rates in South County?

An analysis of state-provided data on testing for the coronavirus shows only 12 percent — 9,265 — of the 72,492 residents in North Kingstown, South Kingstown and Narragansett have so far been tested for the virus, nearly five months into the pandemic. The number could even be lower when repeat testing counts are removed, state officials said. Do you believe Gov. Raimondo and Department of Health officials have done enough to encourage Southern Rhode Island residents to get tested for the coronavirus?