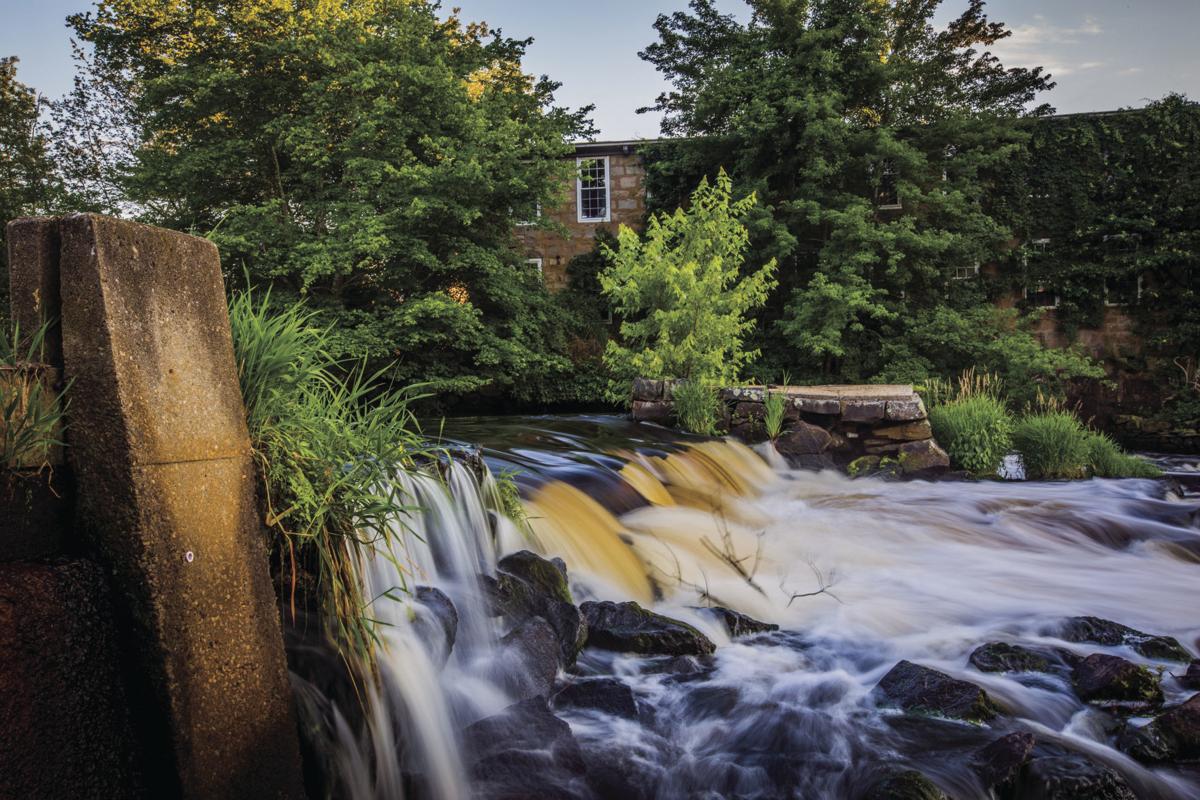 Bradford dam prior to its removal. Photo by Ayla Fox 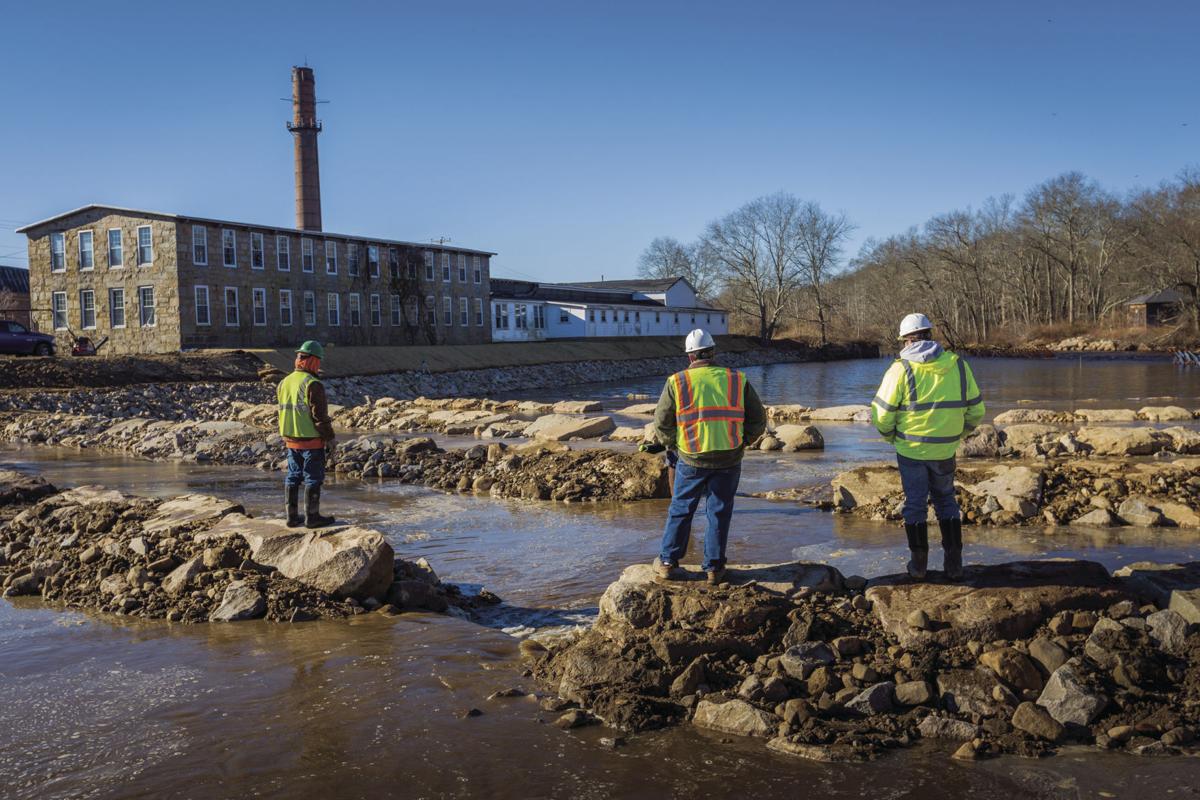 workers from SumCo Eco-Contracting test new step-like weirs downstream from where the dam was removed. Photo by Ayla Fox 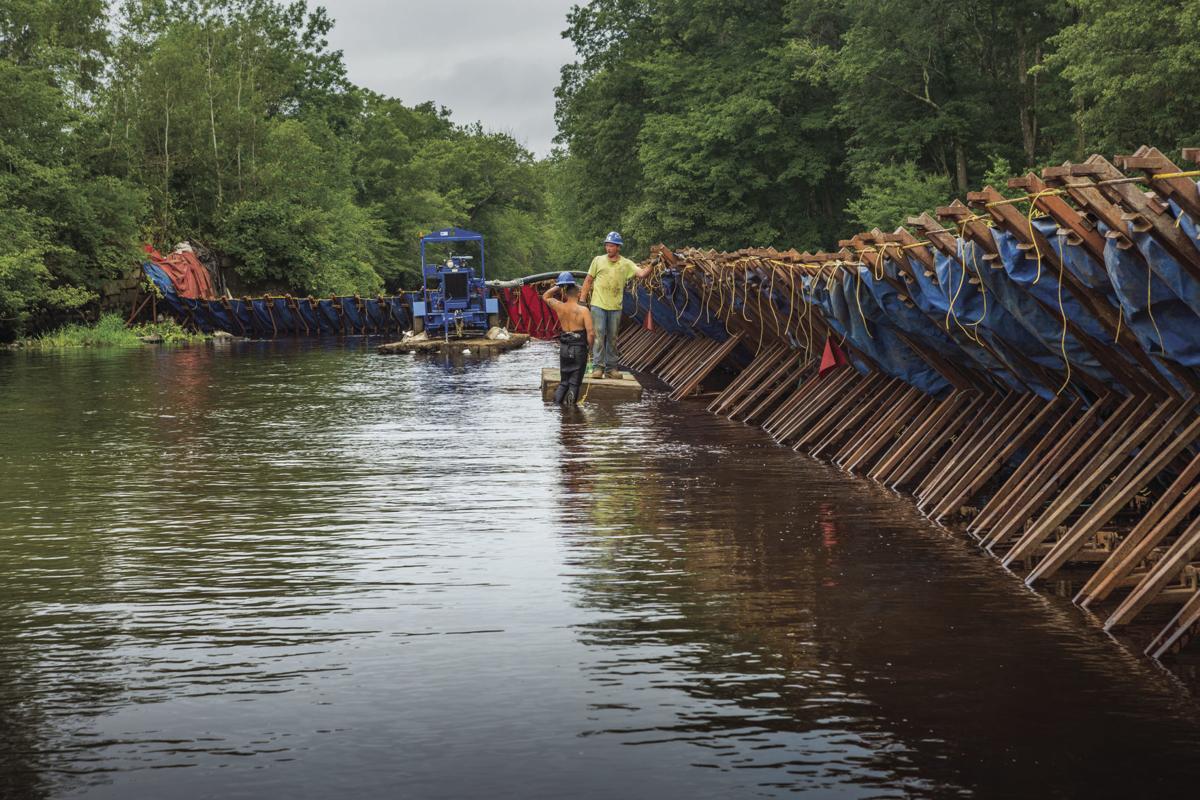 Workers install a coffer dam to redirect the Pawcatuck river while the dam structure was removed. Photo by Ayla Fox 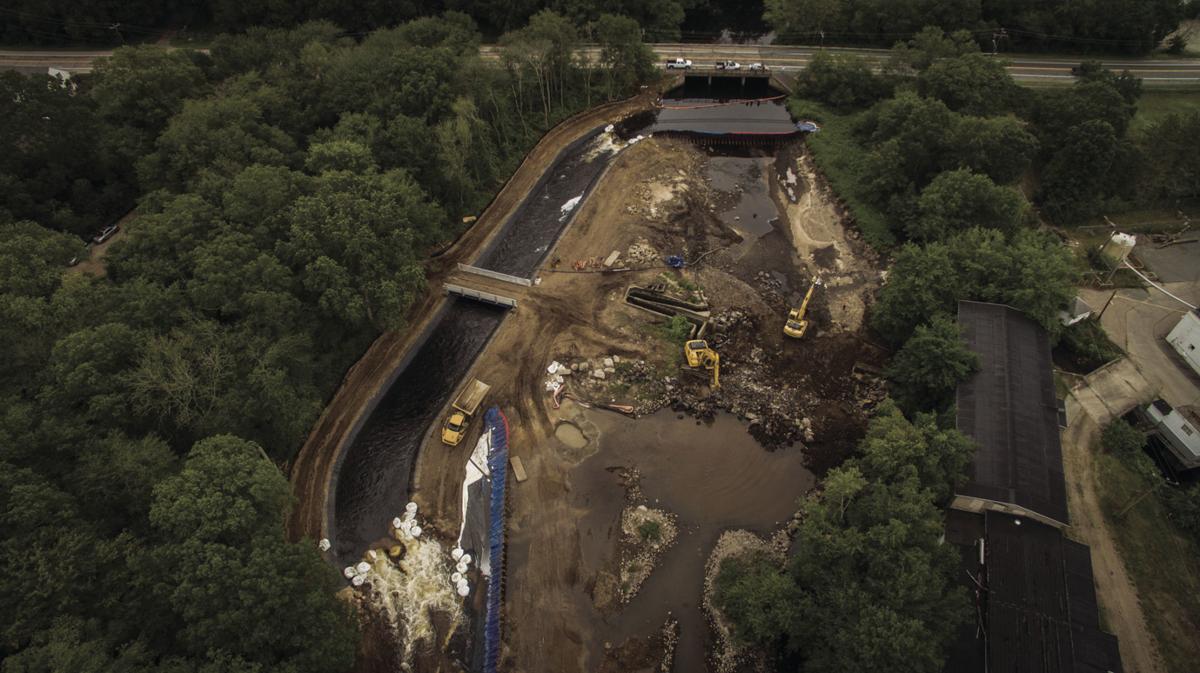 Aerial showing re-routed river on the left, and excavators working to remove the dam on the right. Photo by Ayla Fox 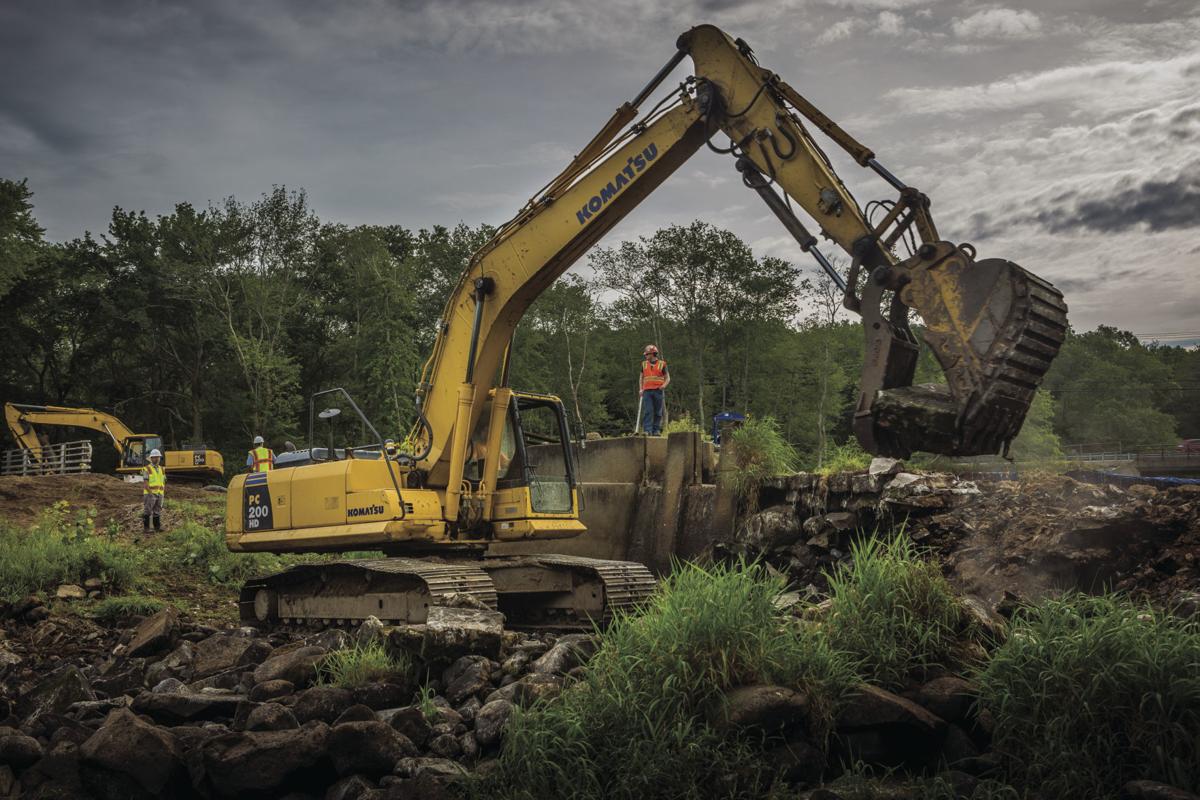 An excavator removes parts of the Bradford Dam. Photo by Ayla Fox

Bradford dam prior to its removal. Photo by Ayla Fox

workers from SumCo Eco-Contracting test new step-like weirs downstream from where the dam was removed. Photo by Ayla Fox

Workers install a coffer dam to redirect the Pawcatuck river while the dam structure was removed. Photo by Ayla Fox

Aerial showing re-routed river on the left, and excavators working to remove the dam on the right. Photo by Ayla Fox

An excavator removes parts of the Bradford Dam. Photo by Ayla Fox

South County’s rich industrial history includes a long list of rivers and streams with old, unsafe dams that contribute to localized flooding and prevent native fish from reaching their spawning grounds. As a result, a movement is underway to remove many of the dams to restore the waterways to their natural paths.

“All those dams were built to power mills during the Industrial Revolution, but the mills aren’t in operation anymore and the dams no longer serve an industrial function,” says Scott Comings, associate director of the Rhode Island office of The Nature Conservancy, which is a partner in several dam removal projects. “Dam removal is beneficial for flood abatement, it reduces the risk of dam failure, and reconnecting the river is important for target fish species like river herring and shad.”

The Pawcatuck River has been the main focus of dam-removal efforts in the region for several years. The White Rock Dam – the first obstruction that fish encounter as they try to make their way upriver – was removed in 2015. The Potter Hill Dam, a few miles upstream, was left in place, but improvements were made to its fish ladder in 2016 after sediment buildup around the ladder created what Comings called a reverse eddy, which spun the fish around and directed them away from the ladder.

The next dam on the Pawcatuck, the Bradford Dam, was removed last year in a six-month project that involved construction of a temporary bypass channel to divert water, demolition of the dam and the repositioning of hundreds of boulders into the river to create a series of step-like weirs and pools to enable fish to swim upstream. It also allows canoes and kayaks to navigate the waterway safely without portaging, and reduces the risk of upstream flooding. “Connectivity is the golden word in this project,” Comings says. “By reconnecting the river, everything that depends on the river will benefit – not just the fish, but freshwater mussels, mammals, reptiles, birds and amphibians, too.”

The next dam to be removed in South County is in North Kingstown, adjacent to the Shady Lea Mill on the Mattatuxet River. The former textile mill is now being used as artist studios. Following the 2010 floods, the state deemed the dam a high hazard, which increased the liability on the dam’s owner and required preparation of an emergency action plan. The owner ultimately decided to have the dam removed, and she is working with Save The Bay to complete the project this year. “We’re always looking for good habitat restoration sites,” says Rachel Calabro, Save The Bay’s Riverkeeper and the coordinator of the Shady Lea project. “There’s a large fish run just downstream at the Gilbert Stuart Museum, and this will open up another half mile of the river for herring, eels and trout.”

Work began last October, when a section in the middle of the dam was removed to lower the water level behind the dam so the sediments could dry out. It also allowed archaeologists to examine and photograph the historic dam, which was found to have been originally constructed of fieldstone in the 1800s, and later capped with cement. This spring and summer, contractors will remove the sediments, which have already been tested and found to be free of contaminants, and then the spillway will be dismantled. “We can already see that the stones are really loose, so I know when we go in to remove it, the dam will come down in a day,” says Calabro. “Some of those stones will be placed in the channel below the dam to create pools and make riffles in the stream for the fish to navigate. That’s the finesse part of a habitat restoration project like this.”

Once the dam is removed, Calabro says that native plants will sprout to revegetate the site. “We’ll let the river naturally find its channel, and we’ll end up with a nice stream running through a vegetated wetland,” she says.

Save The Bay will use this project as a showcase of dam removal techniques to encourage other private dam owners to undertake similar efforts to remove their liabilities and restore habitat. “We’re not just interested in getting fish from point A to point B,” Calabro says. “We want native species to be able to migrate and also have better water quality, better dissolved oxygen, and the other things that happen when you remove a dam. We’re always looking for opportunities to improve stream health, which also improves resilience by removing vulnerable infrastructure.”

Not every dam in the region can or should be removed, however. Some deserve to be protected for their historic attributes, for aesthetic reasons or because there are alternatives to removal. “Every site is different,” says Andres Aveledo, a conservation engineer for The Nature Conservancy and the Rhode Island Department of Environmental Management. “The best conservation alternative is through removal of the dam, but we sometimes select alternative approaches because stakeholders want the impoundment to remain.”

The dam on the Saugatucket River near Main Street in Wakefield, for instance, is on the state’s list of historic places, and the town of South Kingstown did not want to lose its attractive waterfall. Yet the site’s fish ladder, which was built in the 1960s, was not working. So in 2016 the fish ladder was re-engineered to ensure more herring make it over the dam and into Indian Lake.

A similar effort is planned this year at the 12-foot dam at the Palisades Mill Complex in Peace Dale, enabling fish to swim even farther up the Saugatucket.

And in Charlestown, fish now have better access to Factory Pond from Green Hill Pond and the Charlestown Breachway, thanks to an aluminum device called a steep pass that was installed in 2017 to help fish surmount the modest private dam on Factory Brook. “That little run can now support about 20,000 river herring,” says Aveledo. “That’s a lot of bang for our buck.”