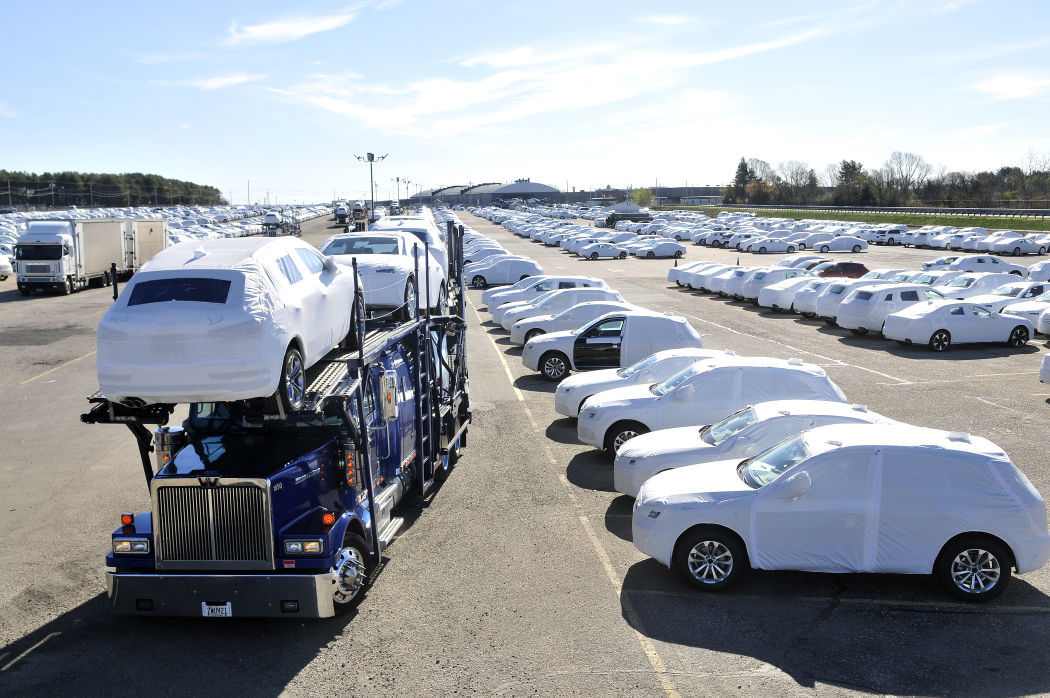 A car carrier leaves NORAD's facility in the Port of Davisville. 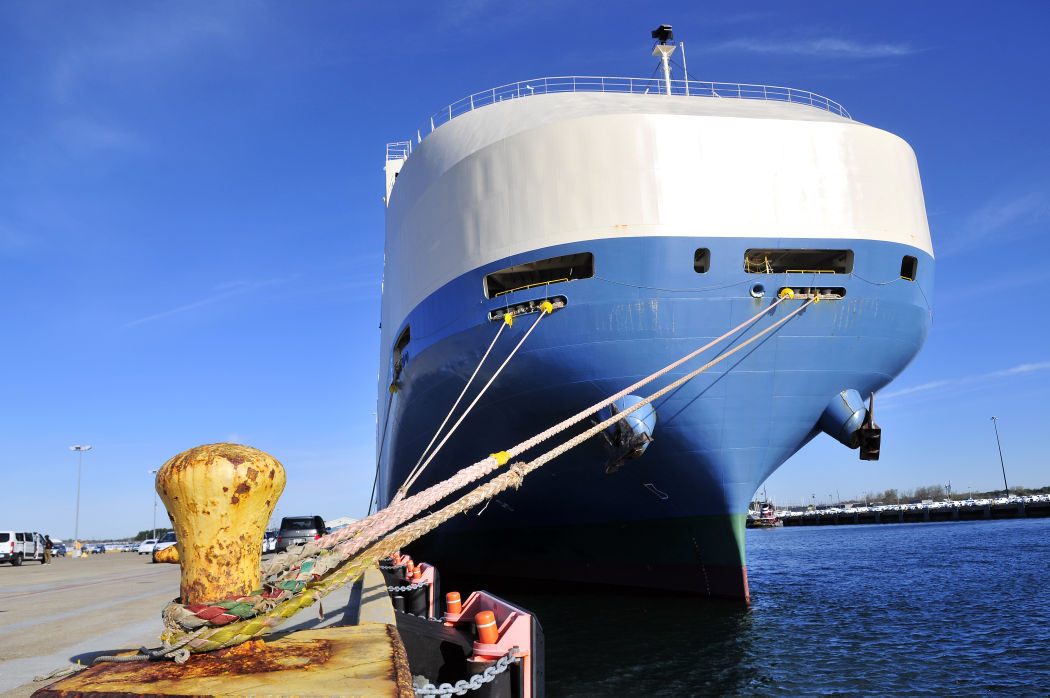 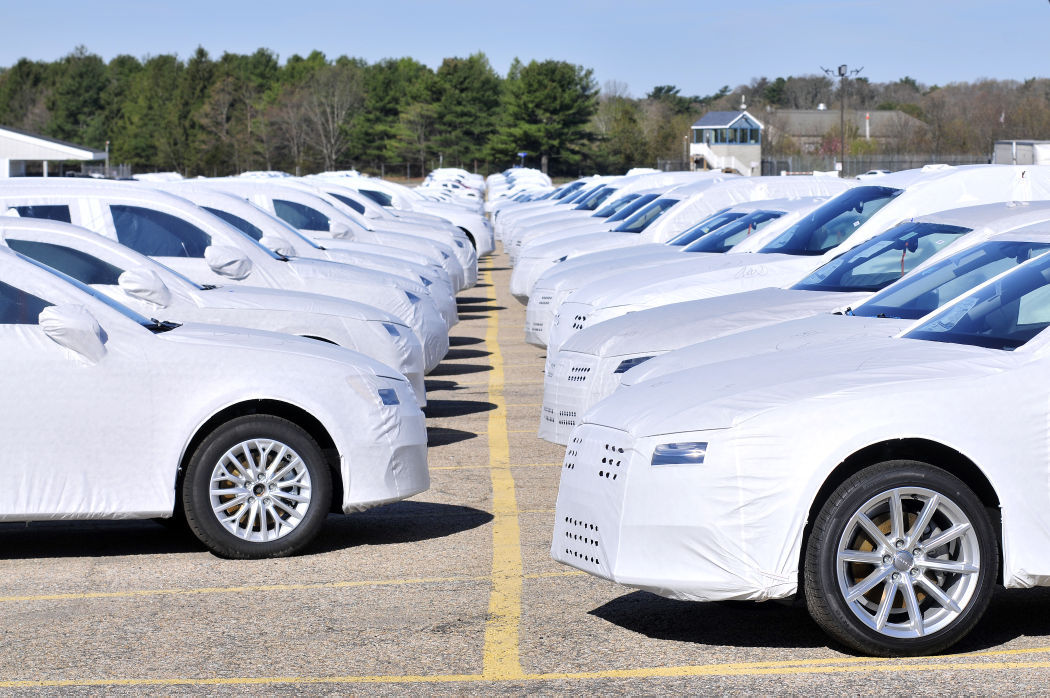 Protective covers are used to prevent damage during transport at NORAD's vehicle processing operation in the Port of Davisville. 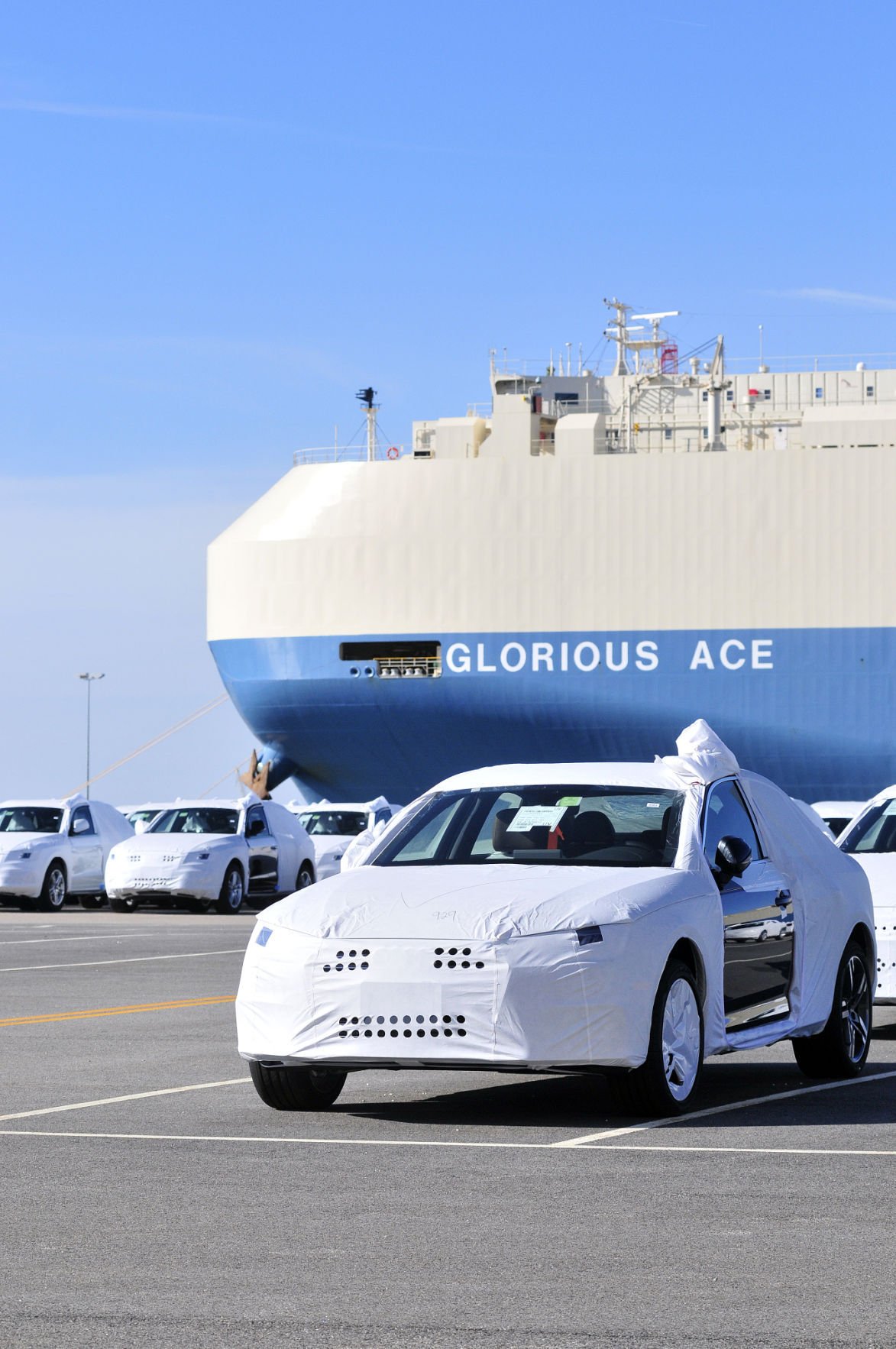 Audis are parked on Pier 2 in the Port of Davisville as part of NORAD's vehicle processing operation. 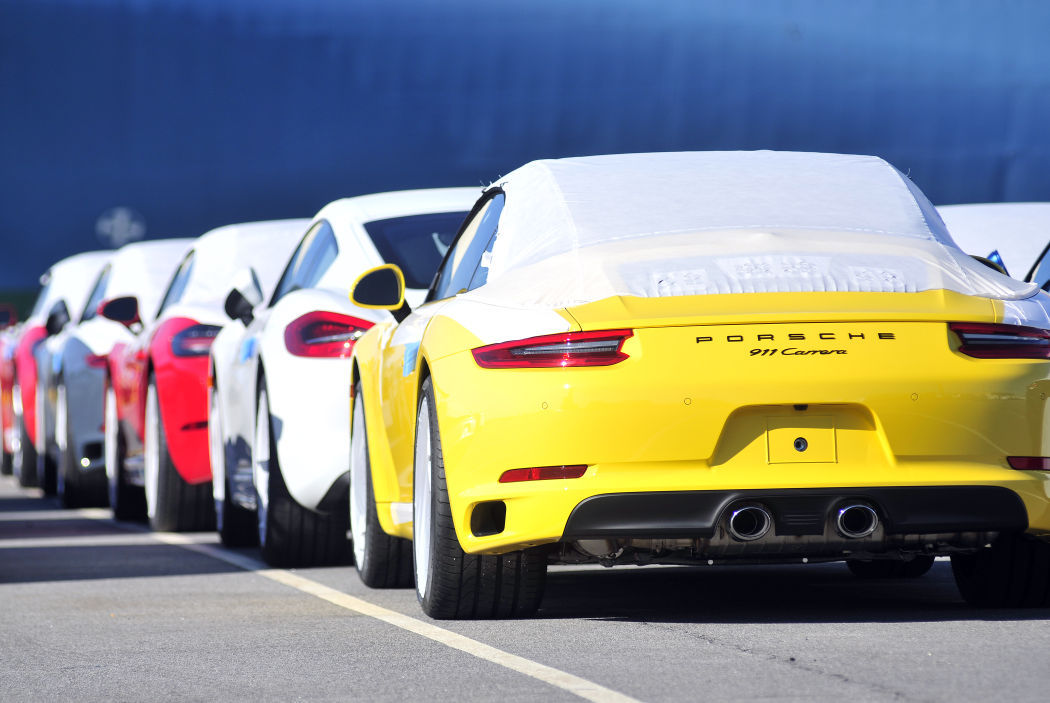 Porsches are parked on Pier 2 in the Port of Davisville as part of NORAD's vehicle processing operation. 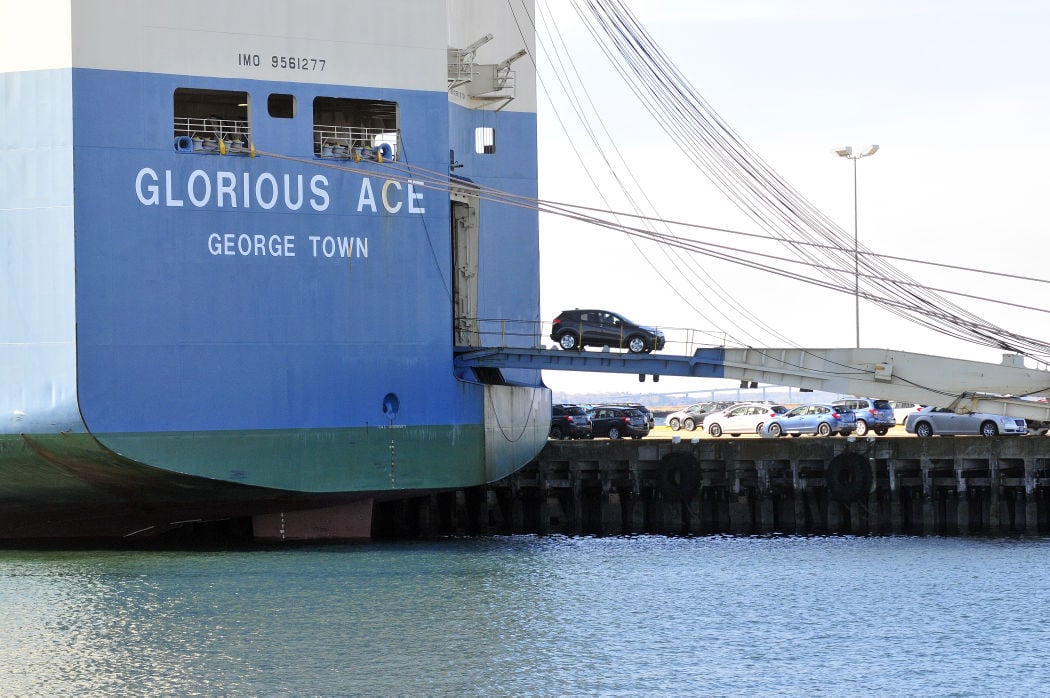 A car carrier leaves NORAD's facility in the Port of Davisville.

Protective covers are used to prevent damage during transport at NORAD's vehicle processing operation in the Port of Davisville.

Audis are parked on Pier 2 in the Port of Davisville as part of NORAD's vehicle processing operation.

Porsches are parked on Pier 2 in the Port of Davisville as part of NORAD's vehicle processing operation.

In the mid-1980s, Michael Miranda had his business world taken out from underneath him. The president and CEO of North American Distribution, or NORAD, was overseeing a car import operation at the Port of Providence, bringing in Nissan, Chrysler and Saab models and fine tuning them before they were sent to auto dealerships in New England. But then the land his business used was sold to Johnson & Wales University, forcing him to move. Miranda was approached by then-Gov. J. Joseph Garrahy about the possibility of a new facility at the former U.S. Naval Base at Quonset Point, near where there had been a recent oil drill that came up dry. At first glance, the 35-acre parcel he eventually decided to lease resembled a “ghost town,” he says. “It was just sage brush, old busted up Quonset huts, tin huts, trees, everything.”

Investing $4 million of his own money, Miranda turned the dilapidated property into a new homebase. NORAD reopened in 1986 with 40 employees in two buildings who worked on more than 35,000 Chrysler and Saab vehicles. Miranda had no idea what he was starting for his own business, Quonset Point and the state’s economy. Three decades later, NORAD is one of the biggest and most profitable car import operations in the country. In the last 20 years, imports at the Port of Davisville have grown 547 percent, and NORAD has set a record for auto imports six years in a row.

Seven auto manufacturers — Volkswagen, Audi, Subaru, Bentley, Ford, Porsche and Honda — bring vehicles to NORAD by ship or train, Miranda says. Around $40 million has been spent to build the company into the automotive giant it is, servicing dealerships in 25 states.

How does NORAD operate?

Vehicles come off ships and trains about 75 percent complete, Miranda says. Because today’s vehicles have so many accessories — different wheels, ground effects, audio systems, etc. — they are not all installed on the factory assembly line, because it would slow down the pace. NORAD officials work with car company representatives onsite, and they work with the factories to get NORAD employees computerized instructions about each vehicle’s installations. “We say ‘OK, this is what has to be built and is all of the accessories that are going in,’” Miranda says. “It’s all done with computers and scanners. Then [the cars] go into the buildings and [mechanics] build the cars. All the car companies want the same thing. They all want the cars to be accessorized and be finished. So the functions are basically the same, but different types of accessories. They’re all done the same way.”

NORAD essentially becomes the final stop on the assembly line, where mechanics install wheel locks, road wheels, mud flaps, exhaust systems, trailer hitches, radios and tinted windows on 800 cars and trucks per day, Miranda says. Some accessories can be done in a day, while others take up to four days, depending on the deadlines manufacturers set. “It’s like an extension of an assembly plant,” he says. “You have engineers from the factories watching what we do every day, communicating with our managers to make sure we fix what needs to be fixed.”

NORAD regularly performs quality control checks on the vehicles, so they are in top shape to move into a showroom. “They may have a problem and not know it. So when we get the cars, we do a quality inspection. We may find things wrong with the cars, like a computer that’s wrong or something, we fix everything here before the dealer gets it.”

NORAD’s operating schedule is rigorous for both the port and its accessory employees. The port is open 24 hours a day, seven days a week. The schedule brings 1,000-3,000 vehicles off each ship, runs from “early in the morning,” Miranda says, to 7 or 8 p.m. The schedule is determined by the loads the ships are carrying. “If it gets real heavy, we’ll have a second shift just moving cars, clearing the piers when the ships come in, putting them in all the designated areas. Sometimes we have two ships a day.” Some accessory employees work seven days a week, 10 to 12 hours per day.

Certain Subaru models are transported to and from Lafayette, Indiana, via train. Miranda says Ford vehicles also go back and forth from the Midwest and Canada by rail. Like any auto dealer, Miranda appreciates customer loyalty. Subaru and Volkswagen have been NORAD’s longest-standing customers at 23 years and 14 years, respectively, which speaks to the quality of service. “Once they come, they don’t leave,” Miranda says. “They’ve got other ports in like three or four other states in the country. So they compare us to what they have elsewhere and we’re always the No. 1 port for them, both in quality and how we handle the cars, and how fast we build the cars.”

Less than the best is not an option for Miranda. While manufacturers are signed to five- to 10-year contracts, they can leave at any point if the work suffers. “It’s based on how well you do each year. You have to perform. You’re on the clock all the time.”

Security is tight at NORAD, considering the vehicles range from economy cars to palaces on four wheels, like Bentleys. “Every yard has a security building with a guard 24 hours a day, seven days a week,” Miranda says. “You have to have that.” NORAD plans to continue to expand. Miranda has an option to lease an additional 25-30 acres and is in discussion with two or three potential new clients.