Skip to main content
You have permission to edit this article.
Edit
Welcome, Guest
Home
ABOUT
ADVERTISE
PHOTO CHALLENGE
SUBMIT
CURRENT ISSUE
1 of 6 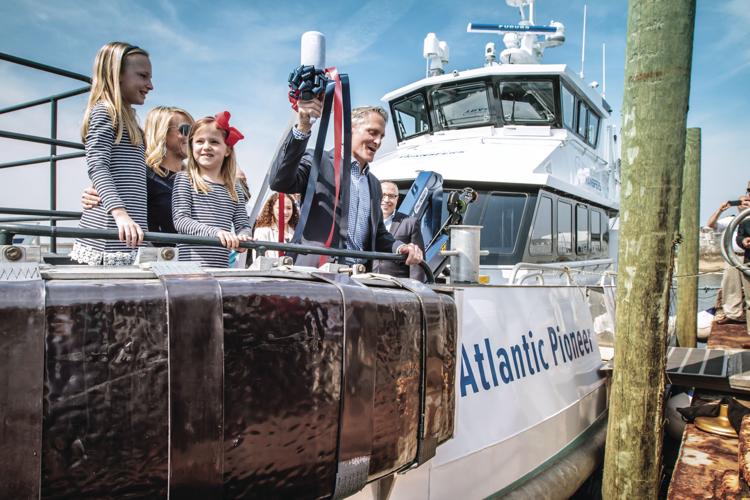 Charlie Donadio Jr., with his family at his side, prepares to christen Atlantic Pioneer, the first boat of it's kind, commissioned by Donadio's company Rhode Island Fast Ferry and built by Blount Boats to transport cargo and workers to the Block Island Wind Farm. 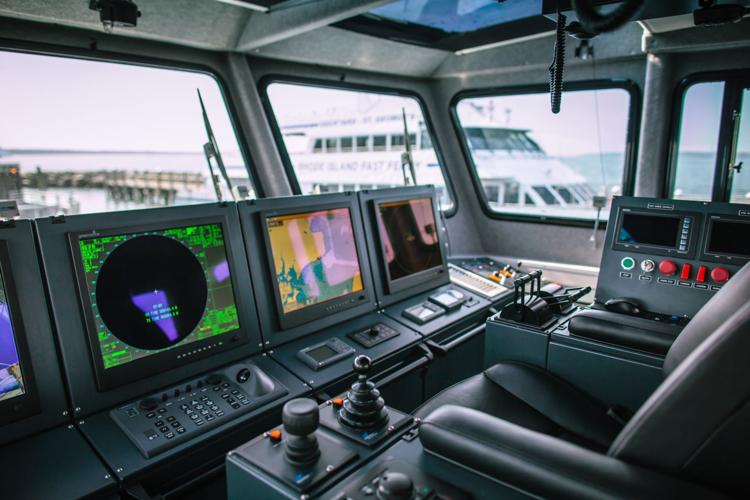 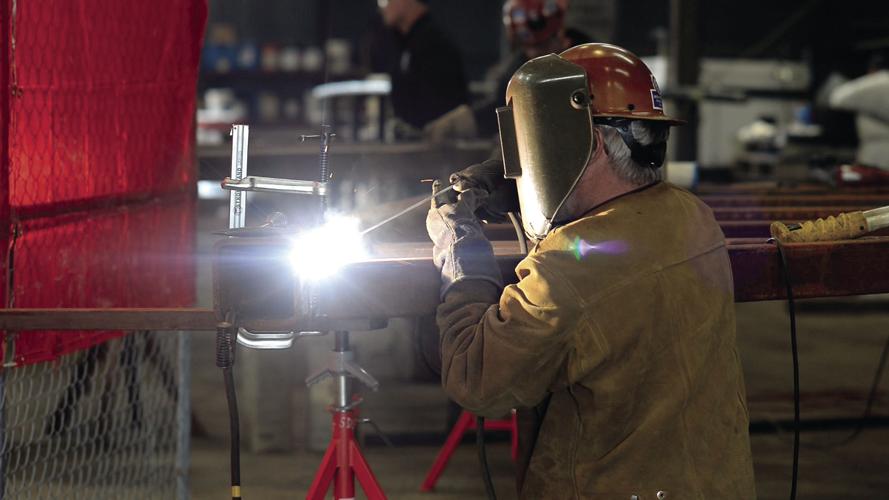 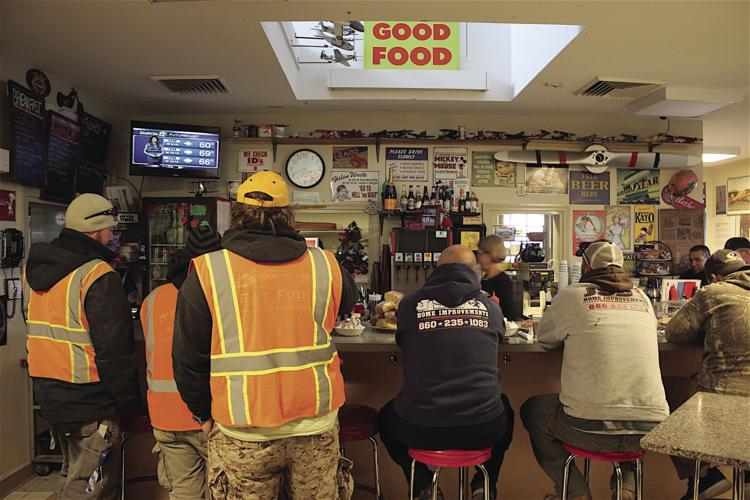 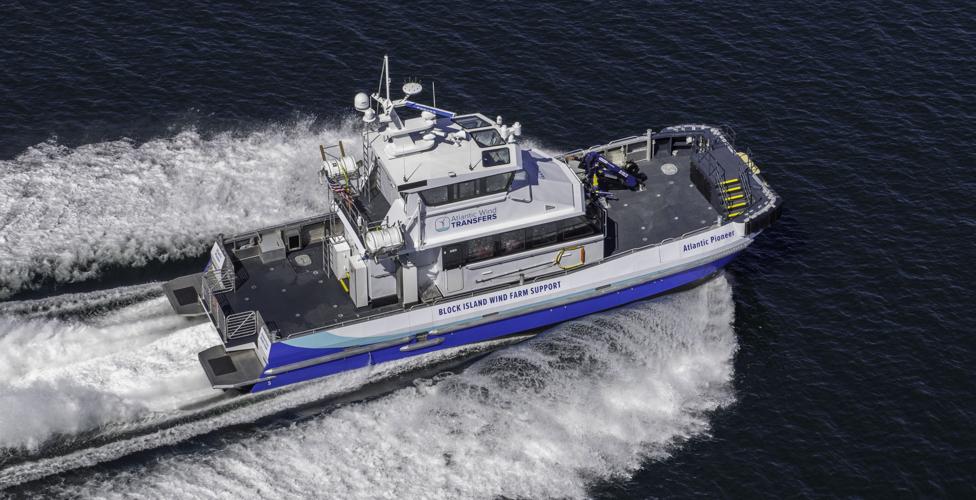 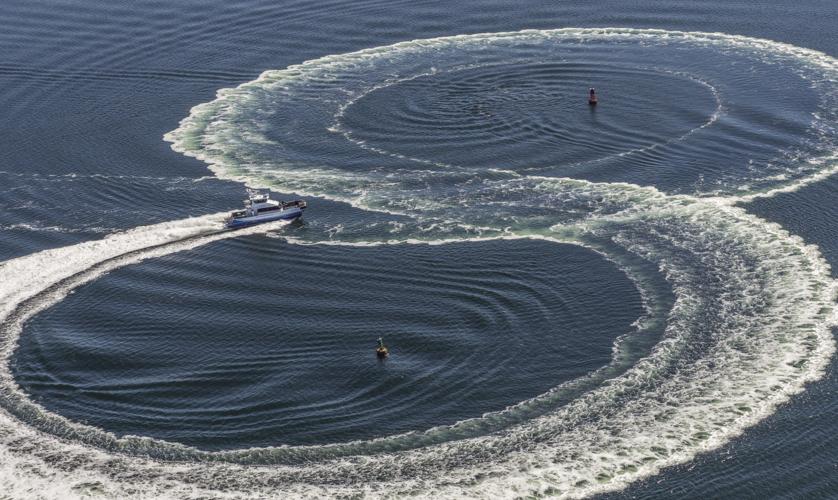 Charlie Donadio Jr., with his family at his side, prepares to christen Atlantic Pioneer, the first boat of it's kind, commissioned by Donadio's company Rhode Island Fast Ferry and built by Blount Boats to transport cargo and workers to the Block Island Wind Farm.

Even before generating their first kilowatts of electricity, the five giant wind turbines under construction as part of the Block Island Wind Farm have certainly generated their share of discussion among Rhode Islanders. America’s first offshore wind farm has been controversial from the beginning, but its owner, Deepwater Wind, has assured residents the turbines will reduce energy bills on Block Island by 40 percent, reduce air pollution across southern New England, and provide jobs to more than 300 workers. The project also could help shift the state toward cleaner energy and a greener economy.

A number of local companies saw a business opportunity in the wind farm and are already benefiting, even before construction of the turbines is completed. Here’s a look at three businesses on the ground floor of the project, each ensuring their companies will have staying power.

Charlie Donadio Jr. has been paying close attention to the wind energy industry for many years. The owner and president of Rhode Island Fast Ferry, which provides high-speed ferry service from Quonset to Martha’s Vineyard, did his homework. He knew an offshore wind farm would need a specially constructed boat to transport workers and cargo to the site during construction of the wind turbines and to transport maintenance workers during the life of the facility. So soon after the wind farm was approved, he negotiated a deal with Deepwater Wind to build the boat they would need.

Christened in May, Atlantic Pioneer is a 70-foot-long high-speed catamaran that can travel up to 31 knots carrying 16 construction workers to the offshore site every day. Built for about $4 million by Blount Boats of Warren, the vessel can also carry up to 47 passengers for sight-seeing cruises in Narragansett Bay.

Donadio says Atlantic Pioneer is the only vessel of its kind in the United States. “Its most unique characteristic is its fendering,” he says. “The fenders are vulcanized rubber, specifically built for connecting to the landing platforms of the turbines.”

When the boat arrives at one of the five turbines, its fenders will rub up and down against the foundation and heat up, eventually sticking to the foundation and locking into a ladder system to transfer workers on and off the boat.

The vessel carried its first complement of utility workers to the wind farm construction site in May, and Donadio expects it to make multiple trips daily until the turbines become operational at the end of the year. Once construction is completed, the boat will be available for sightseeing tours, marine research, survey work and occasional trips to the wind farm for inspections and maintenance.

“This vessel has obviously been a leap of faith for me, but I have 100 percent confidence that this industry is going to take off,” Donadio says. “We’ll be well positioned and have the only skill set to service that industry. When the time comes, we could have other vessels servicing other wind farms up and down the East Coast.”

For 23 years, Bethany Campbell-Coviello has served typical diner fare, including “killer chili and chowder” that her mother makes, to Block Island residents and pilots who fly in and out of the island’s airport where Bethany’s Airport Diner is located. Because of its off-the-beaten-path location, few tourists find their way to her restaurant. But she can rely on the locals to keep her busy, especially a group of older gentlemen she calls the Knights of the Round Table, who appear for breakfast every morning.

The Knights have had a harder time than usual getting a table at the diner, though. For the last several months, about 20 construction workers from J.H. Lynch & Sons arrive early each morning for breakfast, and they take lunch to-go during the week as well.

“They’re a really nice group of hard-working guys who have brought a lot of business to the island,” says Campbell-Coviello. “I sometimes have a hard time paying my bills in May, when business is kind of slow, so to have these guys showing up every day has been great.”

The construction crews are primarily digging trenches along roads on Block Island to install underground utility wires from the wind farm. Their red trucks have been ubiquitous around the island all winter and spring, and their work is expected to continue through at least the early part of the summer. And Campbell-Coviello is happy to have them.

She has a contract with Lynch & Sons to provide two meals per day to the workers, just as she did five years ago when the company made improvements at the airport.

“They’ve provided a nice shot in the arm to my business,” Campbell-Coviello says. “Everybody on the island is working together to benefit from the project. All the hotels and rental houses are filled, and I’m sure the guys are having a beer at night at the restaurants and shopping in the stores, too.”

The Knights of the Round Table have even figured out how to get along with the newcomers. “One knight comes in a little earlier than the rest to grab a table before they’re all taken,” says Campbell-Coviello. “And everybody merges together and gets along just fine.”

Massive construction projects on large bodies of water are nothing new to Nick Tanionos. The chief executive officer of Specialty Diving Services Inc. in Quonset says his crews have been building foundations and making underwater repairs to bridges, piers, pipelines and other structures on New England waters for 30 years. They recently worked on the bridge over the Sakonnet River, piers at the New London Naval Base, the cooling system at the Brayton Point Power Plant, and ship berthing improvements at the Port of Quonset. But they had never worked on an offshore wind farm before. Until now.

More than 50 workers from the company have been involved in almost every aspect of the Block Island Wind Farm. Long before construction began, they installed the buoys that measured how much wind blows offshore. Their divers supported construction of the turbine platforms by disconnecting the underwater rigging from the cranes and making sure the platforms didn’t land on anything of significance when the structures were set down on the sea floor. The workers also fabricated ladders, boat landing platforms and other equipment that was attached to the base of the turbines. They built coffer dams on Block Island to support installation of the cable that will carry electricity from the turbines to the island. They’re even constructing a building adjacent to the company’s Quonset headquarters for the storage of maintenance equipment for the turbines.

Since they work mostly underwater, Tanionos says little of the work they do will be visible to observers once the turbines begin operation. “Our heavy lifting will continue until about mid-July when the turbine installation goes up,” he says, “After that, we’ll support continuing operation and maintenance as needed.”

Tanionos says although this is his company’s first wind farm construction project, the work his crews are doing for Deepwater Wind is not unlike many of their other contracts. The only significant difference is that the company seldom works very far offshore, so the weather conditions have sometimes made the job unusually difficult.

“Working offshore in this area of the country is much more challenging than it would be in the calm of the Gulf of Mexico,” he says. “But if it wasn’t so windy, we wouldn’t be building a wind farm here.”