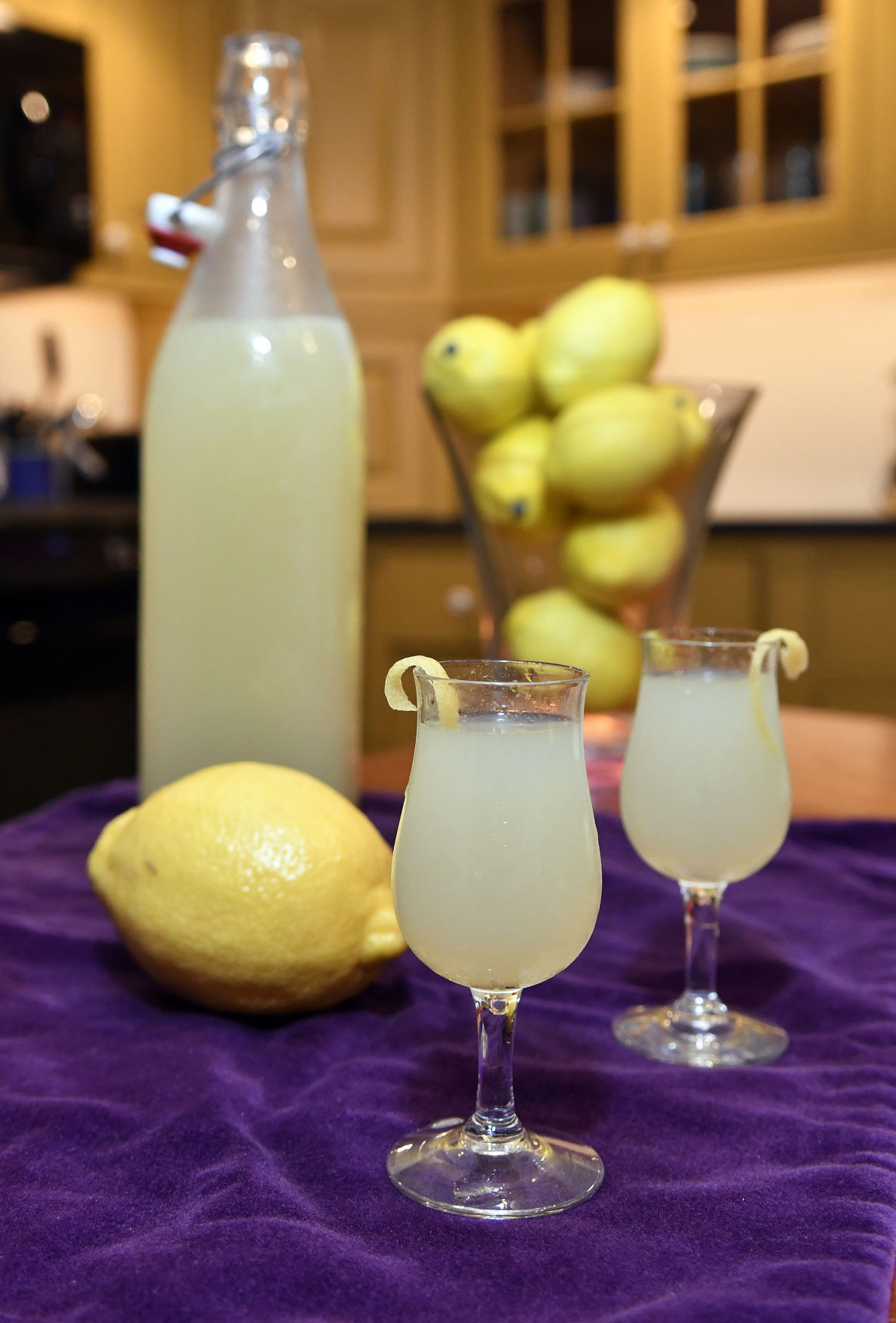 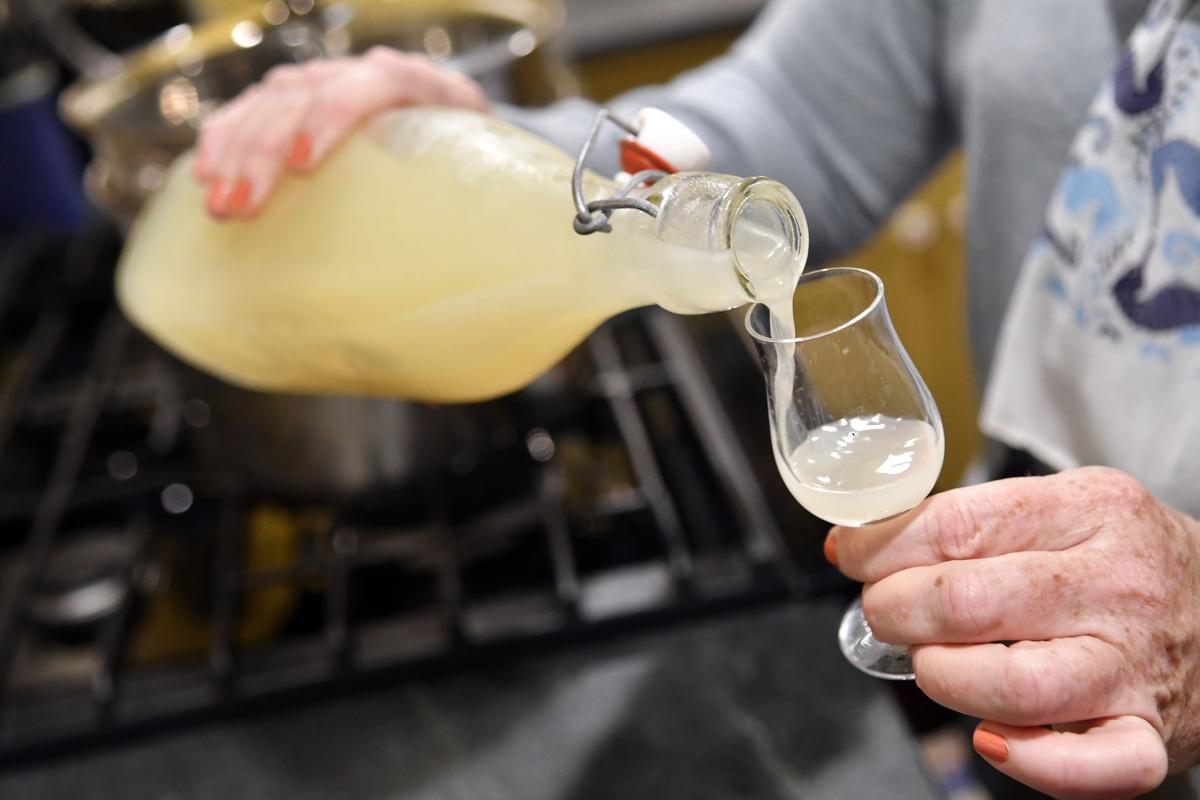 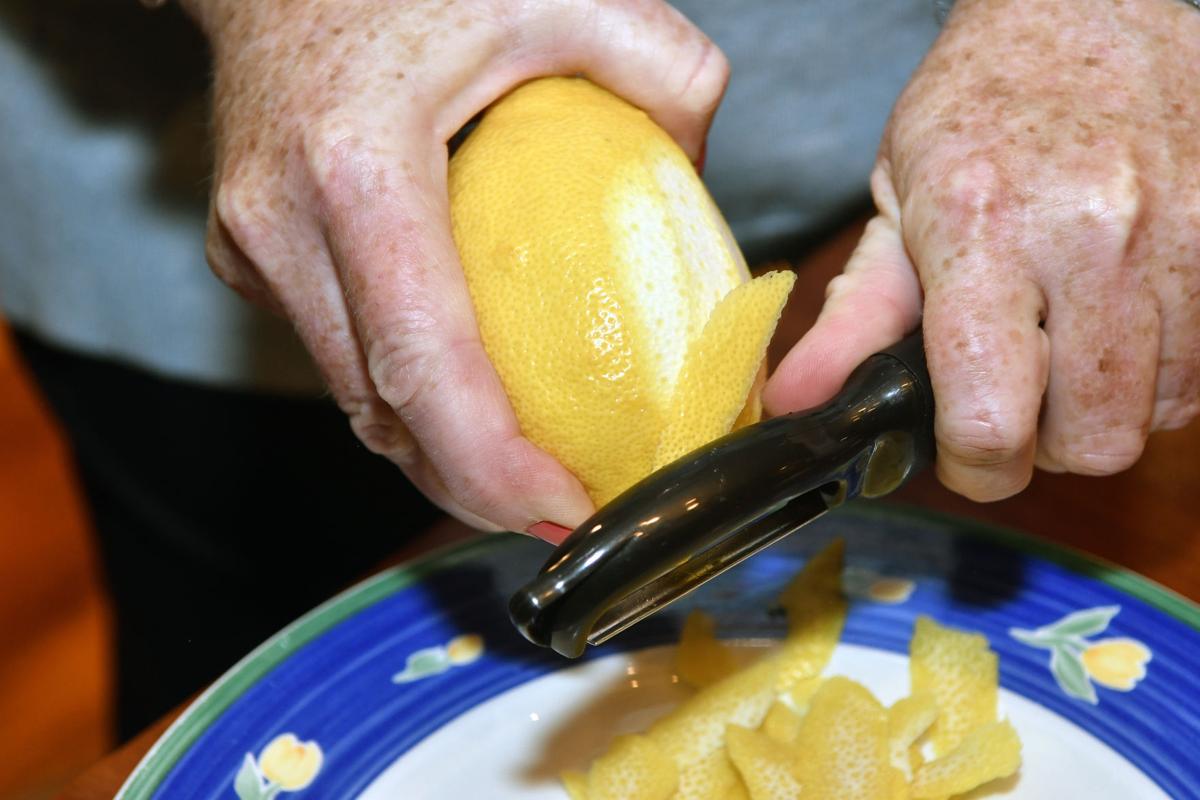 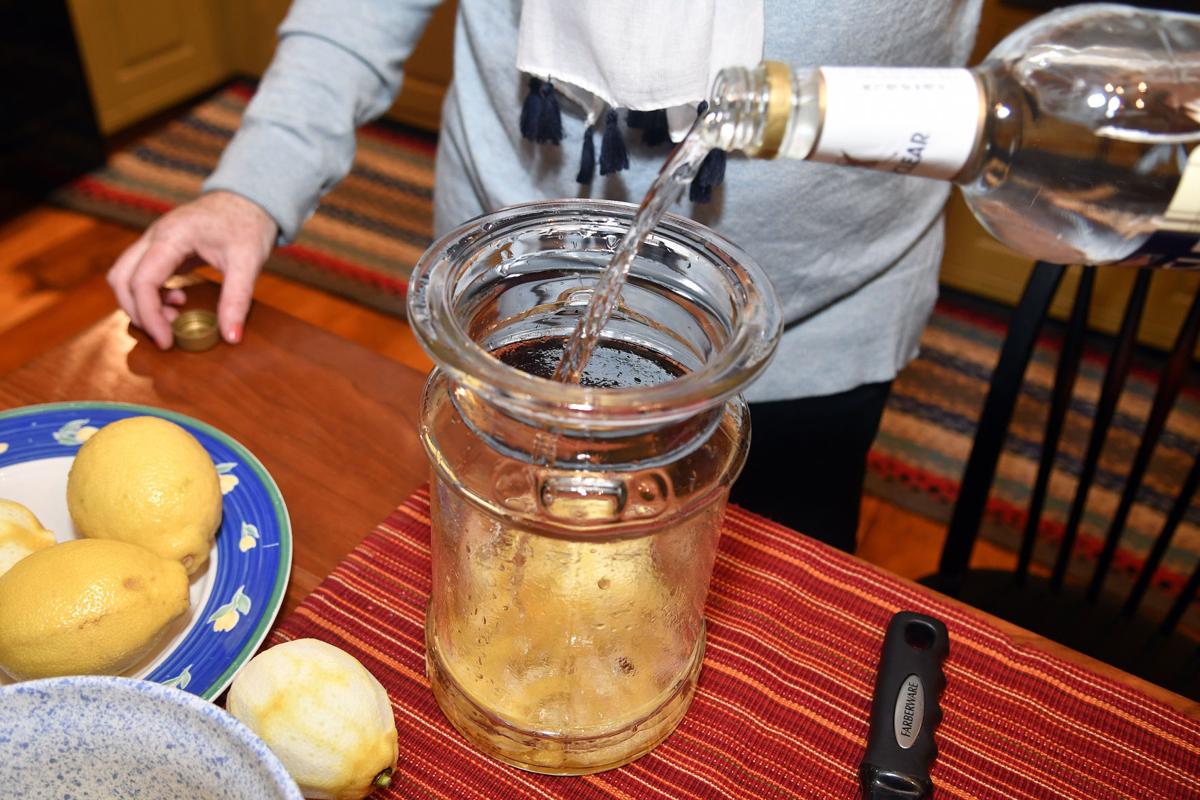 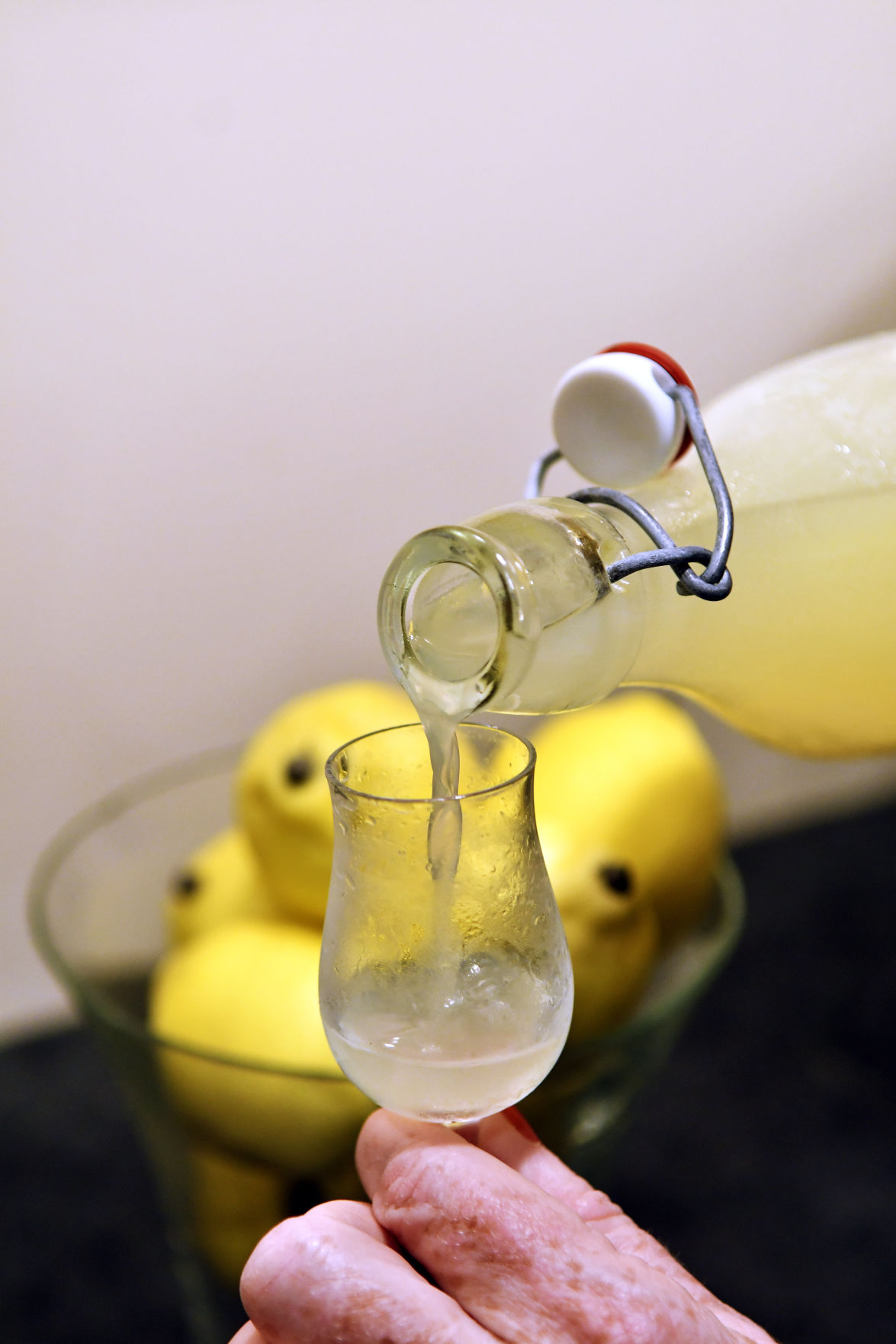 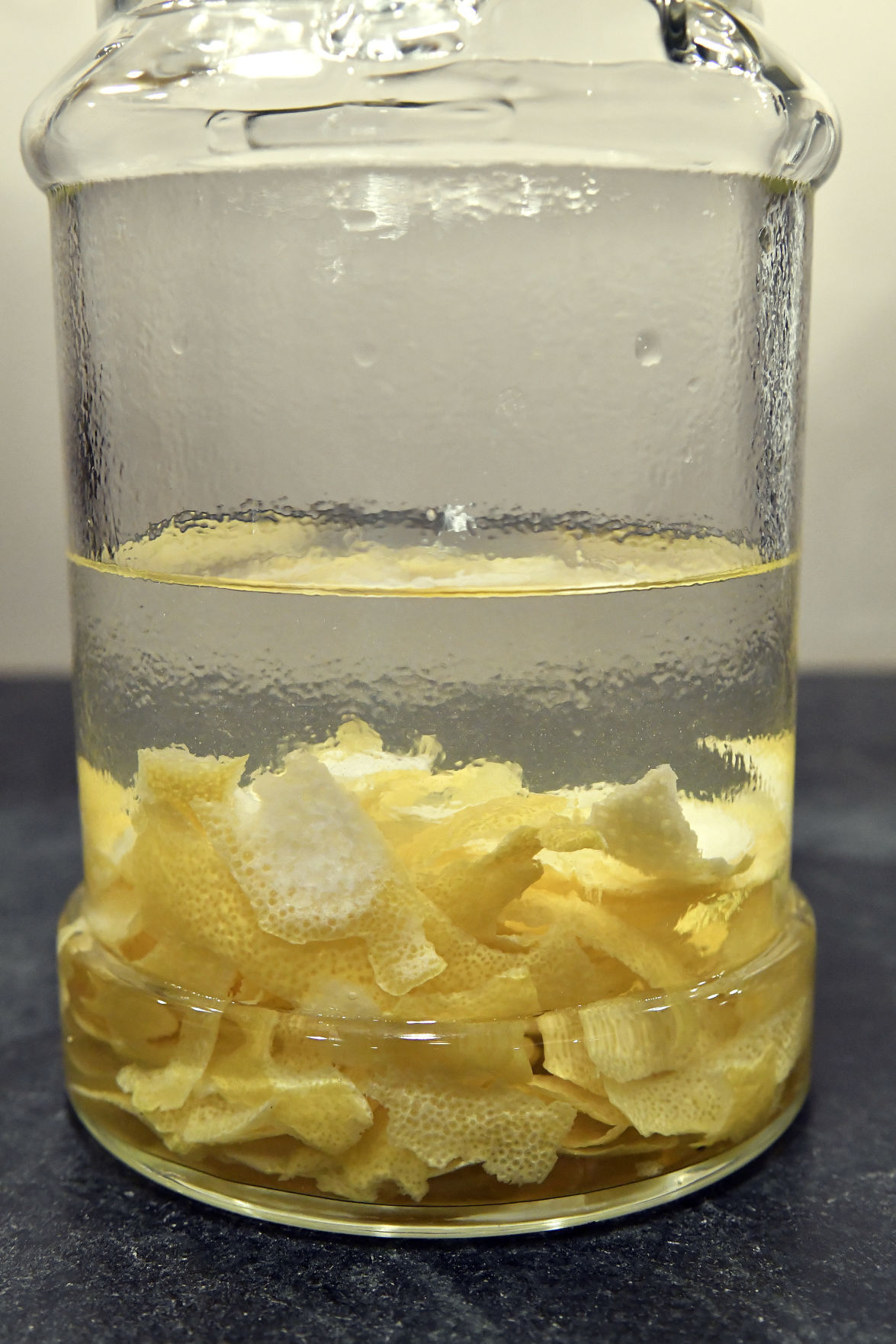 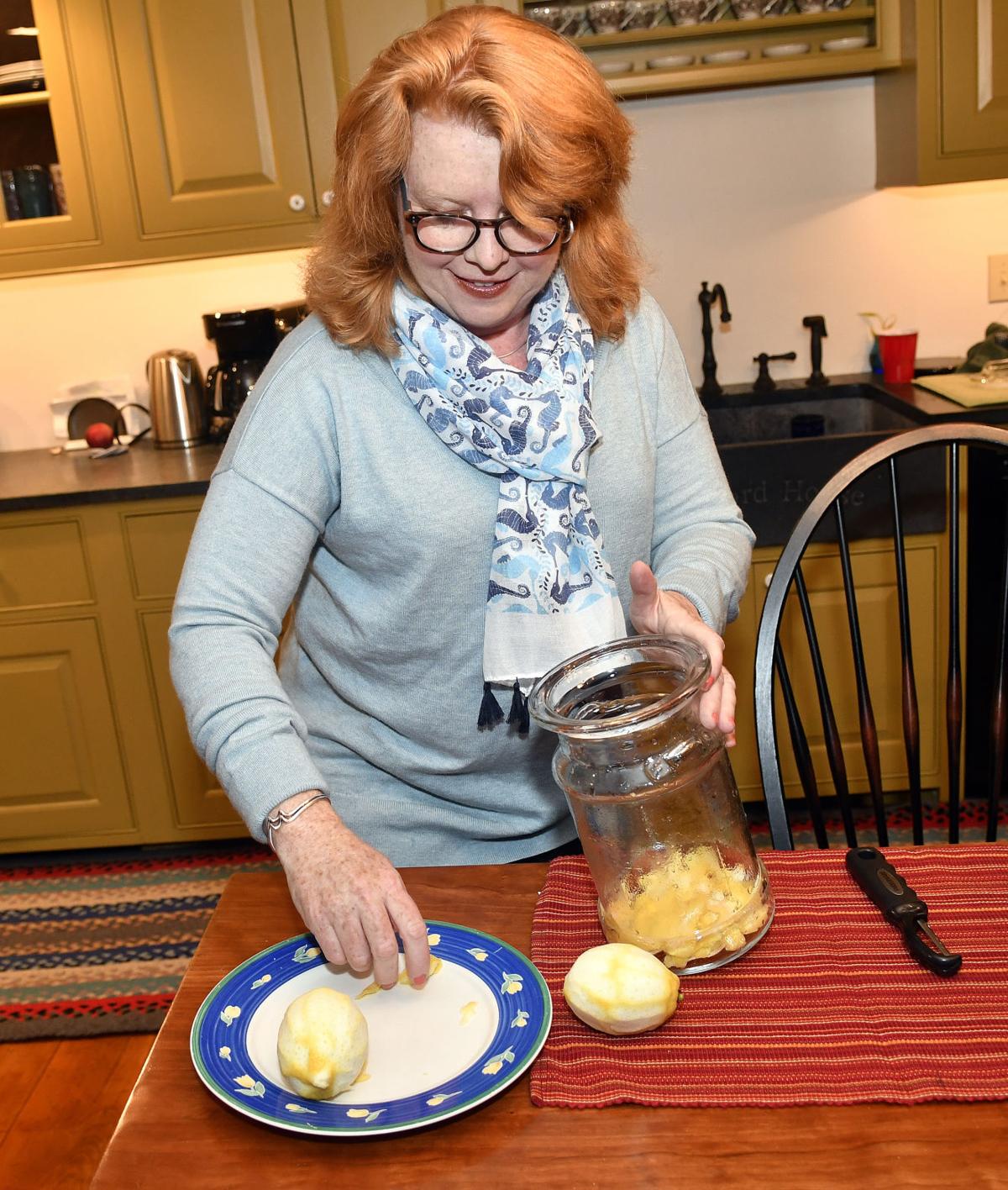 Melissa Devine, of North Kingstown adds lemon peels to a large pitcher for her homemade limoncello.

Melissa Devine, of North Kingstown adds lemon peels to a large pitcher for her homemade limoncello.

When Melissa Devine gathers her friends to watch the Patriots, there’s more than just a case of Bud Light in the fridge. Devine and her friends reach for a bottle of her homemade Limoncello – just a little bit – to toast to another win on the field. “It’s become quite a tradition now,” she says. “Everyone seems to have a bottle on hand.”

It’s not just any brand of the lemony, Italian aperitif; each batch is handmade by Devine herself, taking more than nine days to craft into the perfectly toastable treat. She first discovered Limoncello when on a holiday on the Amalfi Coast of Italy, in 1999. “Lemons were everywhere, and after dinner each night we would be served this absolutely delicious Limoncello,” she says. “We were there for a regatta, and [chef] Mario Batali was there. He explained to me how simple it was to make, and a year later I made a huge batch, got some beautiful bottles from Wickford Gourmet and gave it to friends for Christmas.”

Since then, Devine has perfected her recipe. Her secret? “Everclear,” she says. “It’s something we all drank in college and man, we have some really horrible memories of it, but grain alcohol like Everclear makes the best Limoncello.” She now makes batches year-round for family celebrations. And, of course, for game day, too.

Judy Packhem was the recipient of a boozy homemade gift before she decided to start making some herself. “Twenty years ago, my friend gave me some Bailey’s that she had made and I just loved it,” says Packhem. “Of course, I asked for the recipe, and I’ve been making it ever since.”

The recipe has worked for all those years, and Packhem’s version of Bailey’s Irish Cream has gained a loyal following of friends and family. Packhem brings the creamy drink to Christmas and New Year’s parties as hostess gifts, changing the bottles and labels she makes every year to keep gift recipients on their toes. “It’s just great,” she says. “It’s good alone, great over ice, and so good in coffee.”

Packhem’s secret addition to her Bailey’s is a little bit of chocolate syrup. “It just makes it fun with a little extra sweet flavor that helps it stand alone,” she says. “I haven’t bought the real stuff in more than 20 years, and I think my Bailey’s is better!” Now retired and splitting her time between North Kingstown and Jupiter, Florida, Packhem plans to continue the tradition of Bailey’s for Christmas this year, and for many years to come.

Cranston’s Will Worthy has been making Swedish Glogg for longer than he can remember – certainly longer than he’s been able to legally have it himself. Worthy grew up on Pojac Point in North Kingstown, when the area was predominantly newer immigrants, including his grandparents. Around the holidays, Worthy’s Swedish grandmother, Vega Carlsson, would make a fragrant, strong liquor as a Christmastime treat. “I still bring glogg to my grandparents’ friends,” he says. “It’s very much a local tradition. I carry the torch on.” Worthy brings his children to deliver the glogg during the cooler months, reaching out to yet another generation.

Glogg was traditionally a drink that ore miners in Sweden would sip after coming home from work. The contents, in addition to alcohol, helped to clear the sinuses and reduce congestion. “Plus, it’s pretty loaded, so it’d make them fall right to sleep,” he says. Made of herbs, fruits, sugar, port wine and vodka (plus a few family secrets that Worthy holds close to heart), glogg is served warm in small shot glasses. “That’s just plenty,” says Worthy of the drink’s potency. “I have a lot of friends who claim that their children were made thanks to the glogg.”

Worthy continues his grandmother’s tradition of using unique glassware to bottle the glogg – though he even remarks that as a 6-foot-5 gun shop owner, he’s out of place in craft stores searching for unique bottles. “I always include blue and yellow ribbons for the Swedish flag, and a little card including all the history of the drink.” Then, on Christmas Eve, Worthy makes his rounds, distributing to family and friends. “It’s really great to see all these friends while I’m playing Santa,” he says. “It’s my way of keeping the traditions alive.”

There’s no better way to toast with friends and family this season than with a taste from your own kitchen.

7 ripe lemons (look for the most colorful and ripe)

With a vegetable peeler, remove the rind off 7 lemons. Pour full bottle of alcohol into a large glass jar that has a cover. Put the rind into the jar with the alcohol, and cover, setting aside in a cool space for 9 days. (After 9 days the rinds will have turned to a dull yellow – most of the yellow color should have been absorbed into the alcohol.)

In a large pot, bring 11 2/3 cups of water to a boil, and add sugar until it dissolves. Let mixture cool.

Strain the lemon rinds from the alcohol and throw them away. Combine the lemon alcohol mixture with the cooled simple sugar and mix well. Using a funnel, pour the liquid into bottles, and store in freezer or refrigerator. Salute!

1 cup whiskey (Packhem says the “cheap stuff” will do)

In a mixing bowl, whip the egg yolk. Add the rest of the ingredients, except for the whiskey, and whip for a few minutes. Finally, add the whiskey and stir. Refrigerate immediately.

Bring water to a boil and add cloves, cinnamon sticks, cardamom, vanilla and orange zest. Stir. Then, add sugar and stir until dissolved.

Reduce heat to medium, then add in raisins, port, wine and (optional) brandy. Cover and reduce to a low simmer for at least 5, and up to 24, hours. Monitor water levels and add more, 1 cup at a time, if needed.

To store, allow mixture to cool slightly, pour into glass bottles or sealable mason jars, seal and refrigerate. To reheat, warm in a saucepan over low-medium heat for about 5 minutes, until wine is hot but not simmering.