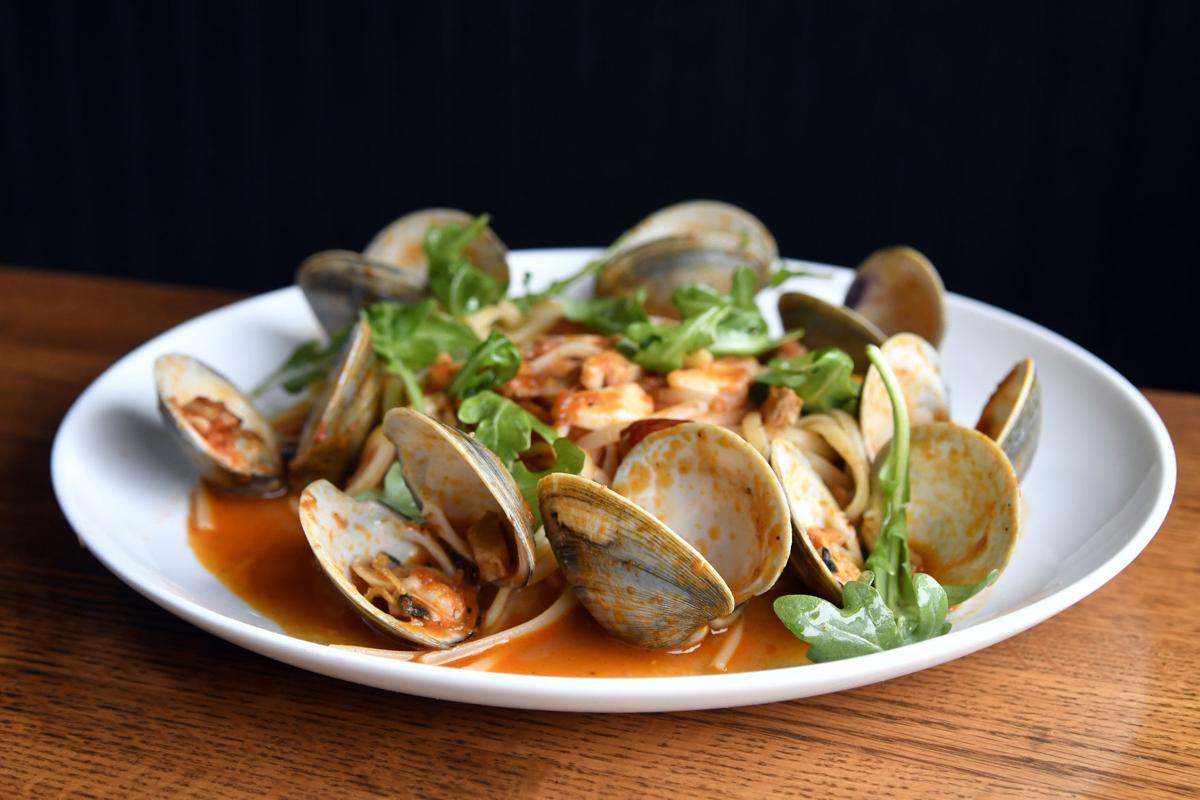 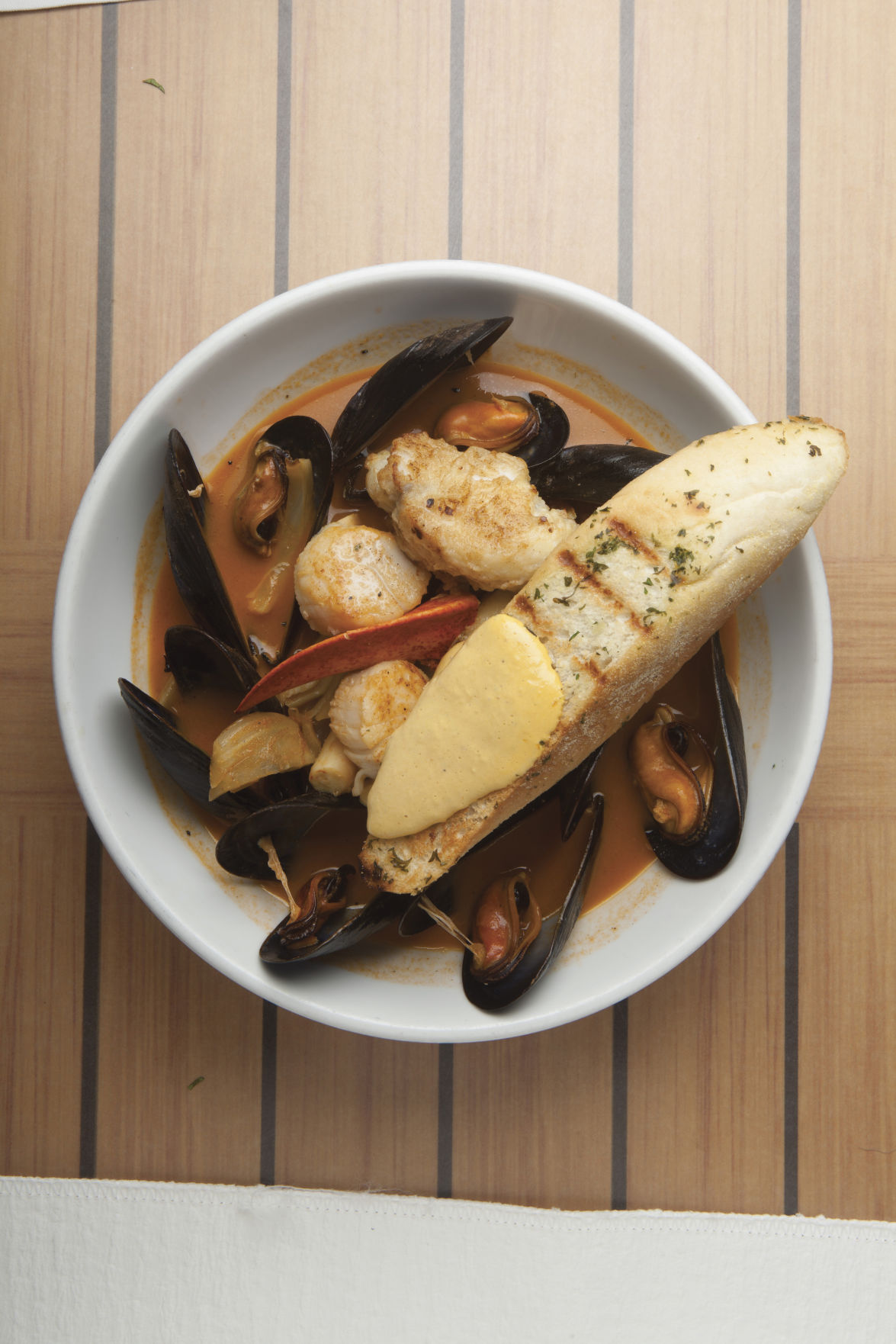 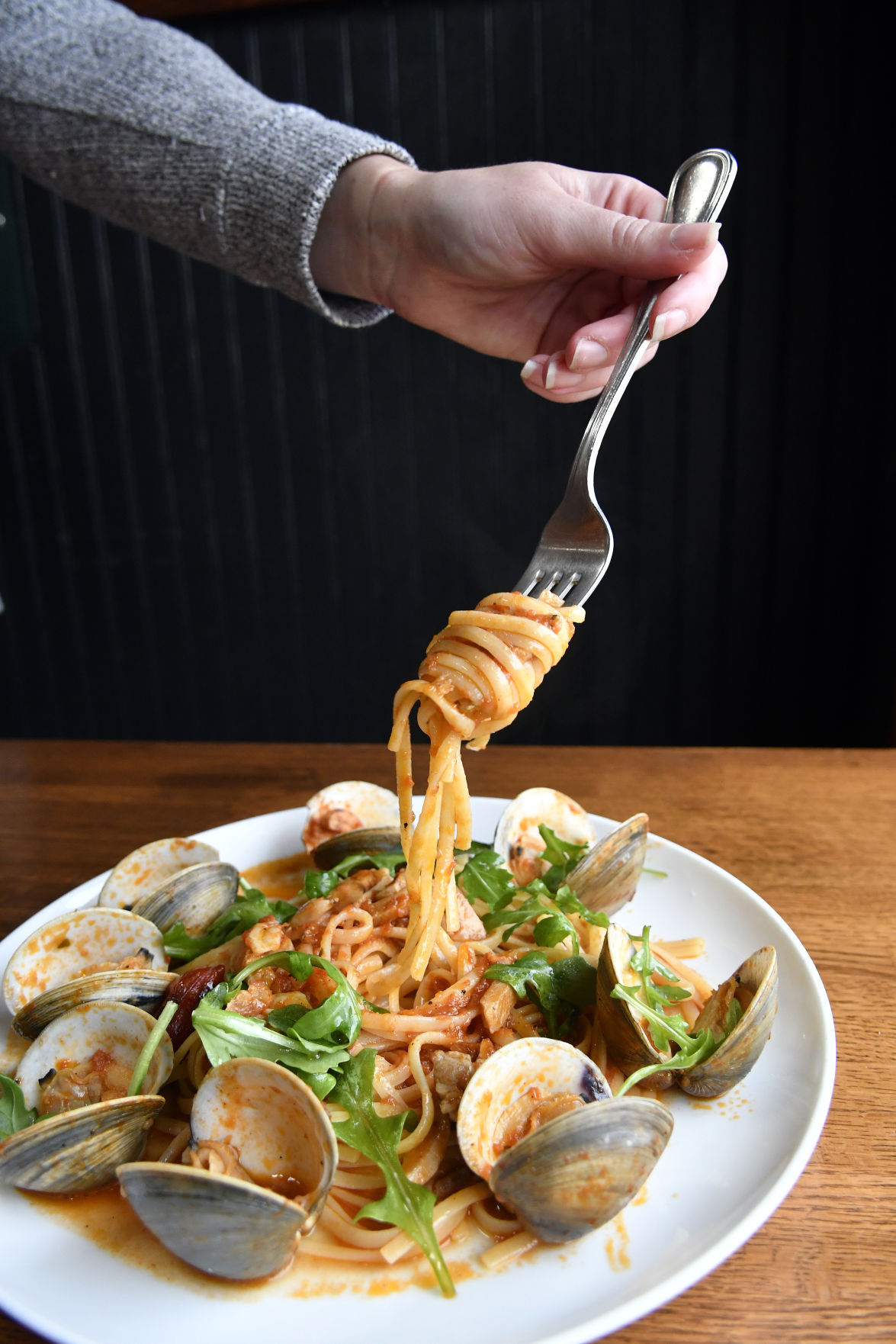 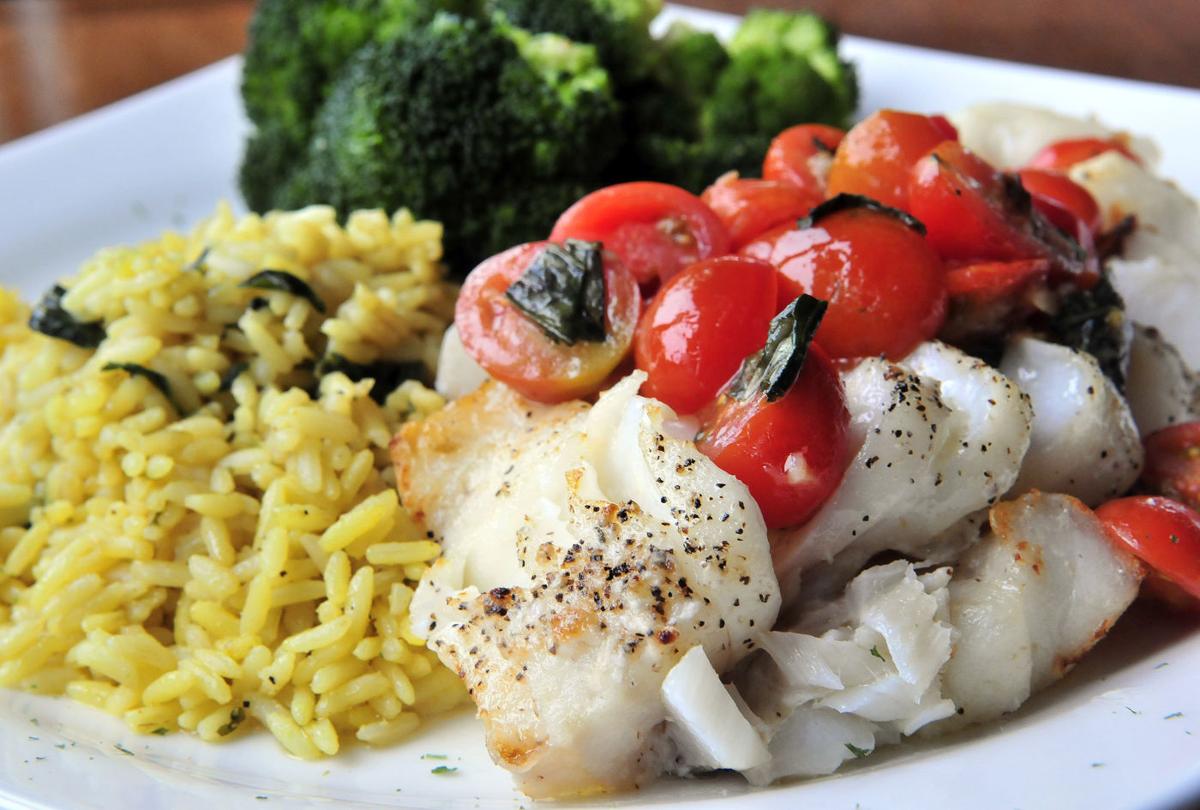 Roasted local cod with cherry tomatoes, broccoli and rice at George’s of Galilee. 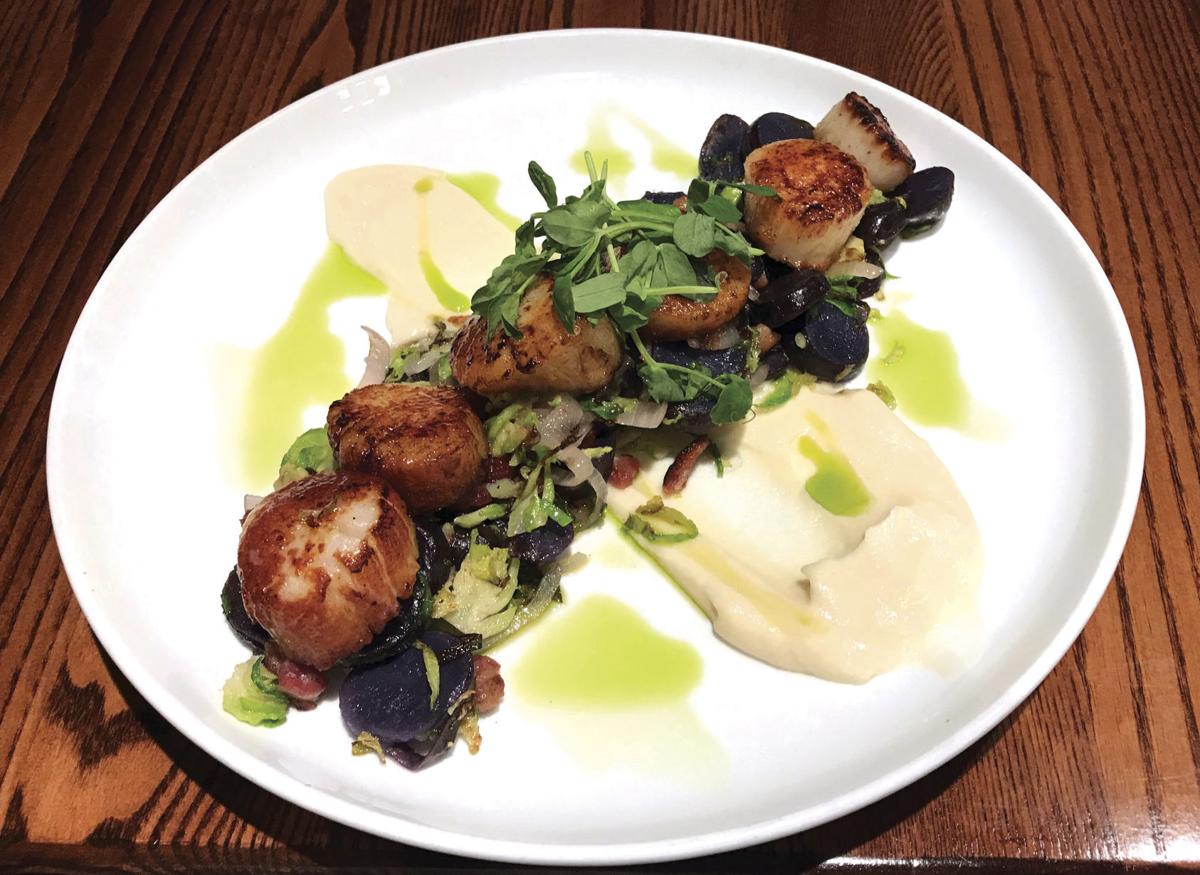 Roasted local cod with cherry tomatoes, broccoli and rice at George’s of Galilee.

Ever since I was a little girl, Christmas Eve has been one of the most special and memorable family holidays. It was and still continues to be, after almost 50 years, a festive evening spent with cousins, grandparents, aunts, uncles, sisters, brothers, in-laws, parents and friends all coming together in spirited Italian tradition to celebrate the Feast of Seven Fishes.

Mouth watering smells of baked stuffed shrimp dripping in butter, garlic and lemon, steamy pounds of pasta with clams, salty smelts, mussels and calamari covered in homemade sauce emanated from my aunt’s kitchen. I remember vividly the family gathered together – adults at the grown-ups table while the cousins swirled our pasta at the kids table as we ate all night long and gave thanks. I remember asking my mom a long time ago why we ate seven different kinds of fish and what it all meant.

She told me tales of this Italian-American celebration on Christmas Eve and that the abundance of seafood reflects the tradition of abstinence from red meat until the actual feast on Christmas Day. Originating from Southern Italy, where it is known as The Vigil (La Vigilia), it commemorates the wait (Vigillia di Natale) of the midnight birth of the baby Jesus. This tradition dates back to Roman Catholic tradition and abstaining from eating meat during certain times of year, when devout Catholics would dine on fish instead. The most famous dish for Southern Italians during the Christmas holiday is baccalà, or salted cod fish.

There are many combinations of fish enjoyed during the Feast of Seven Fishes: smelts, calamari, shrimp, mussels, clams, anchovies, lobster and sardines. And there are many hypotheses for what the number seven represents in the feast; seven is the most repeated number in the Bible and appears more than 700 times; another popular theory is the number seven represents completion, as shown in Genesis 2.2; “By the seventh day God completed the work he had been doing; so on the seventh day he rested from all his work.” Other theories include that the number represents the seven Sacraments of the Roman Catholic Church or the Seven Hills of Rome surrounding the city. Whatever meaning has been passed down through history and time, one thing holds true – it brings people together to celebrate the season.

Executive chefs John Sheehy and Walter Slater of Trio in Narragansett serve up a savory scallop entrée with pureed cauliflower and fingerling potatoes, which they say is “a basic technique that you can take a shot at serving at home for your families,” says Slater. “Our scallops are fresh and local from a boat in Galilee.”

Kevin Durfee of George’s of Galilee agrees. “Skip the traditional fishes and go for something caught right off the rocks in town,” he says. “I’m Italian and celebrate the Seven Fishes holiday. I like this dish (Roasted Day Boat Cod) because it’s a healthy alternative to baccalà, which is salted. If you celebrate the holiday why not do it healthy.”

Karen Bruno, owner of Tate’s Italian Kitchen in Wickford, recommends a popular favorite from their menu, linguini with clams, which she says is an easy one to make at home. “This is an outstanding dish to make for the Feast of the Seven Fishes; people love it for this time of year.”

Coincidentally, the night before Christmas, Santa would love to dine on Seafood Paella, a specialty dish served at Matunuck Oyster Bar. “It has lots of savory flavors and is a nice winter dish,” says owner Perry Raso. Serve it over saffron rice, which is the traditional way to eat paella, though it also can be served over pasta.

Local restaurants share recipes for Feast of the Seven Fishes.