You are the owner of this article.
Edit Article Add New Article
Welcome, Guest
Home
ABOUT
ADVERTISE
CURRENT ISSUE
PHOTO CHALLENGE
SUBMIT
1 of 5 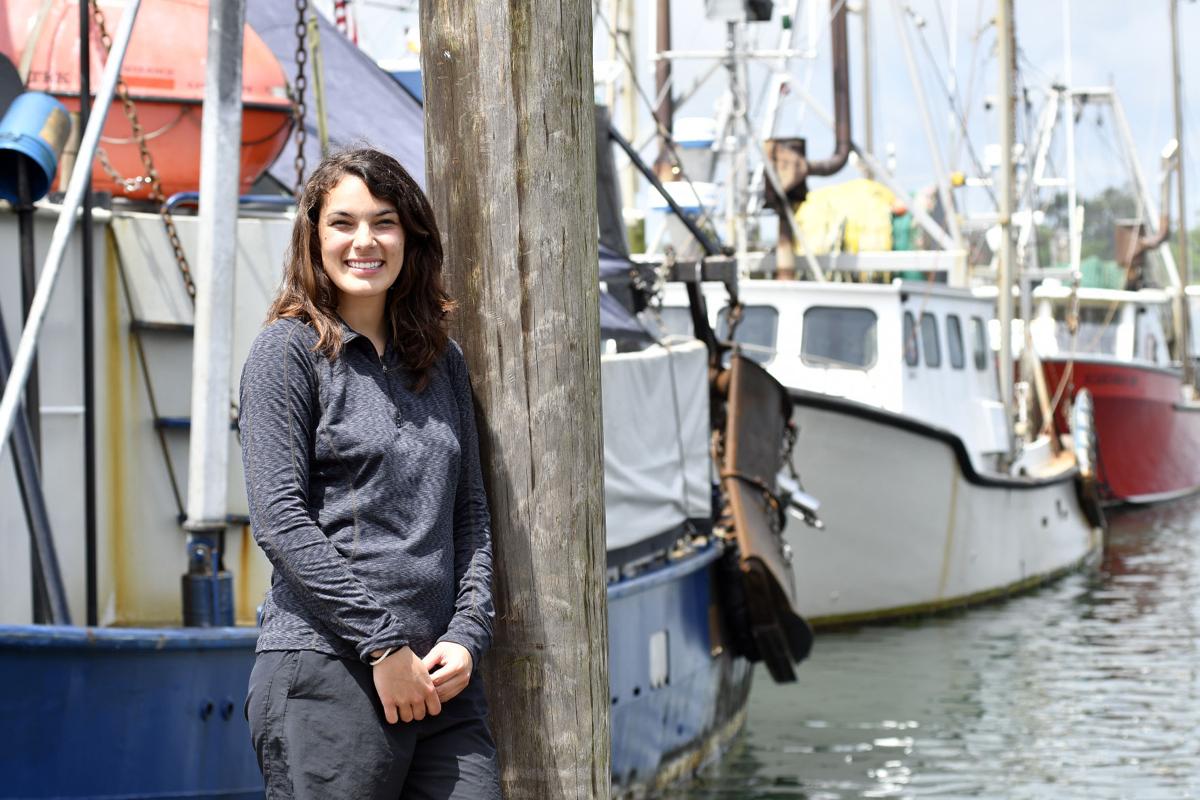 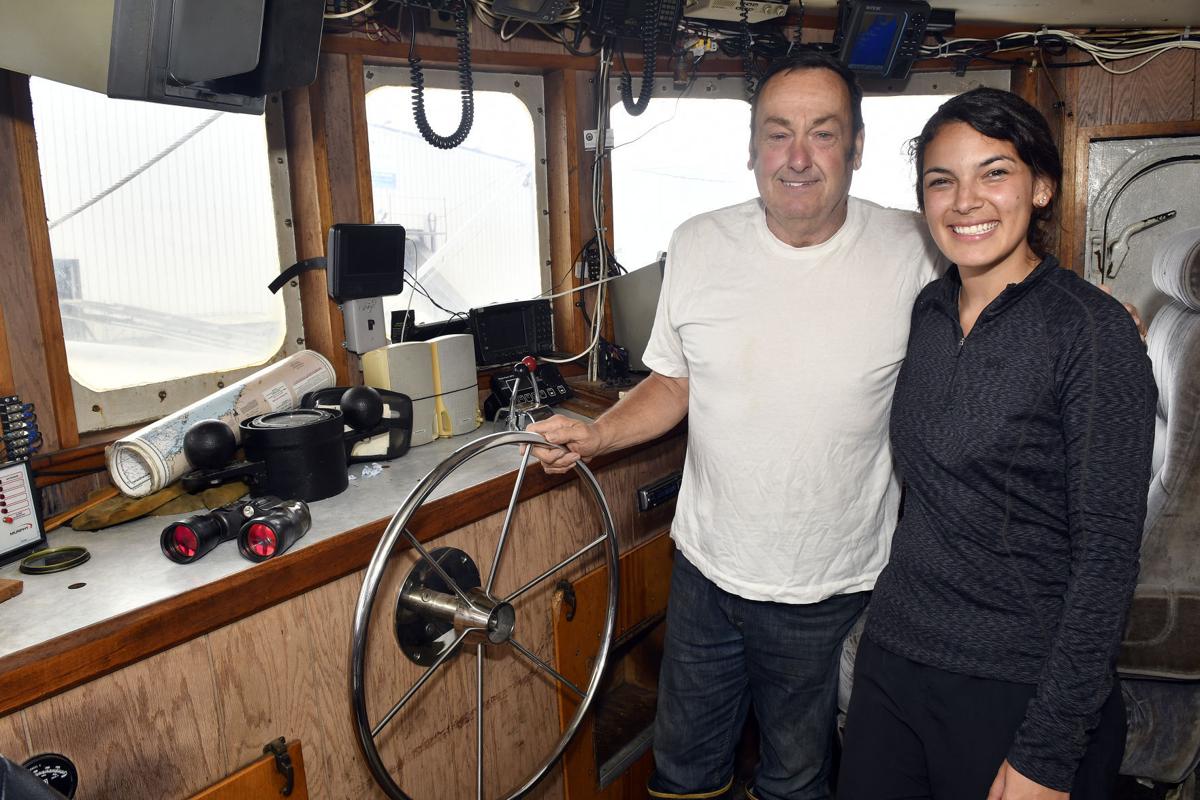 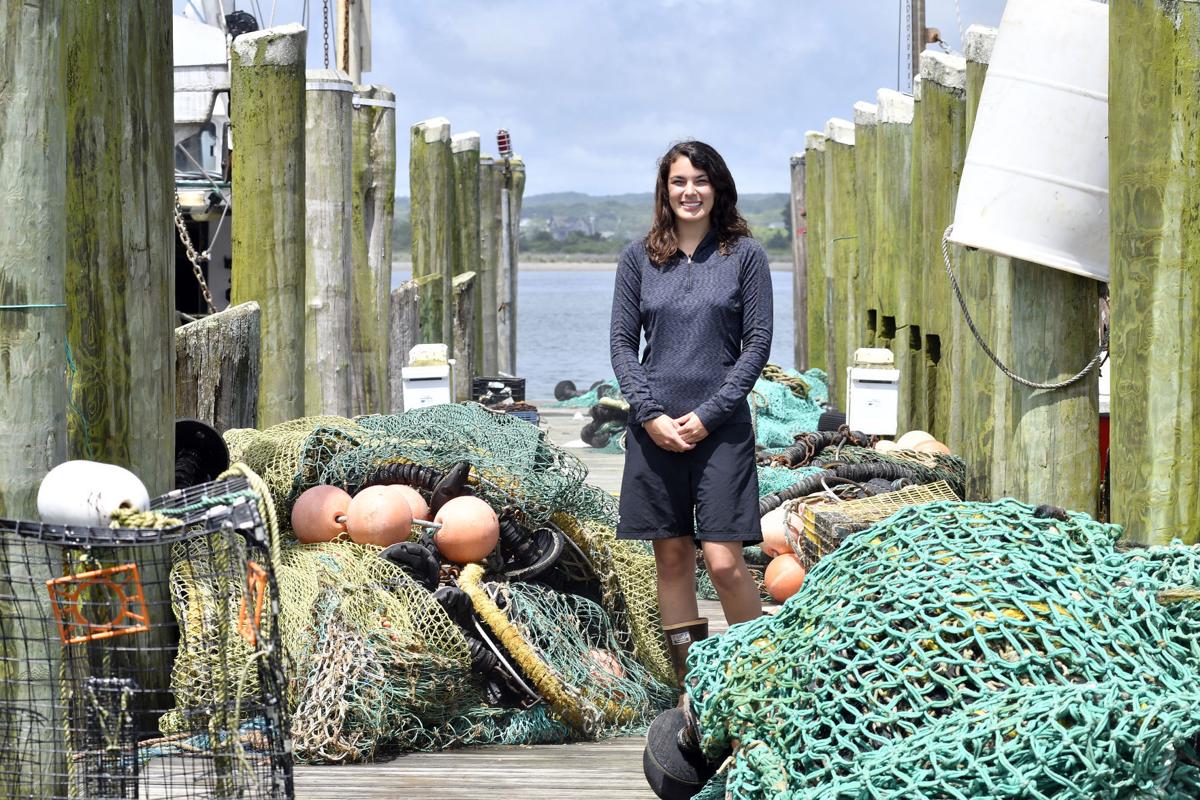 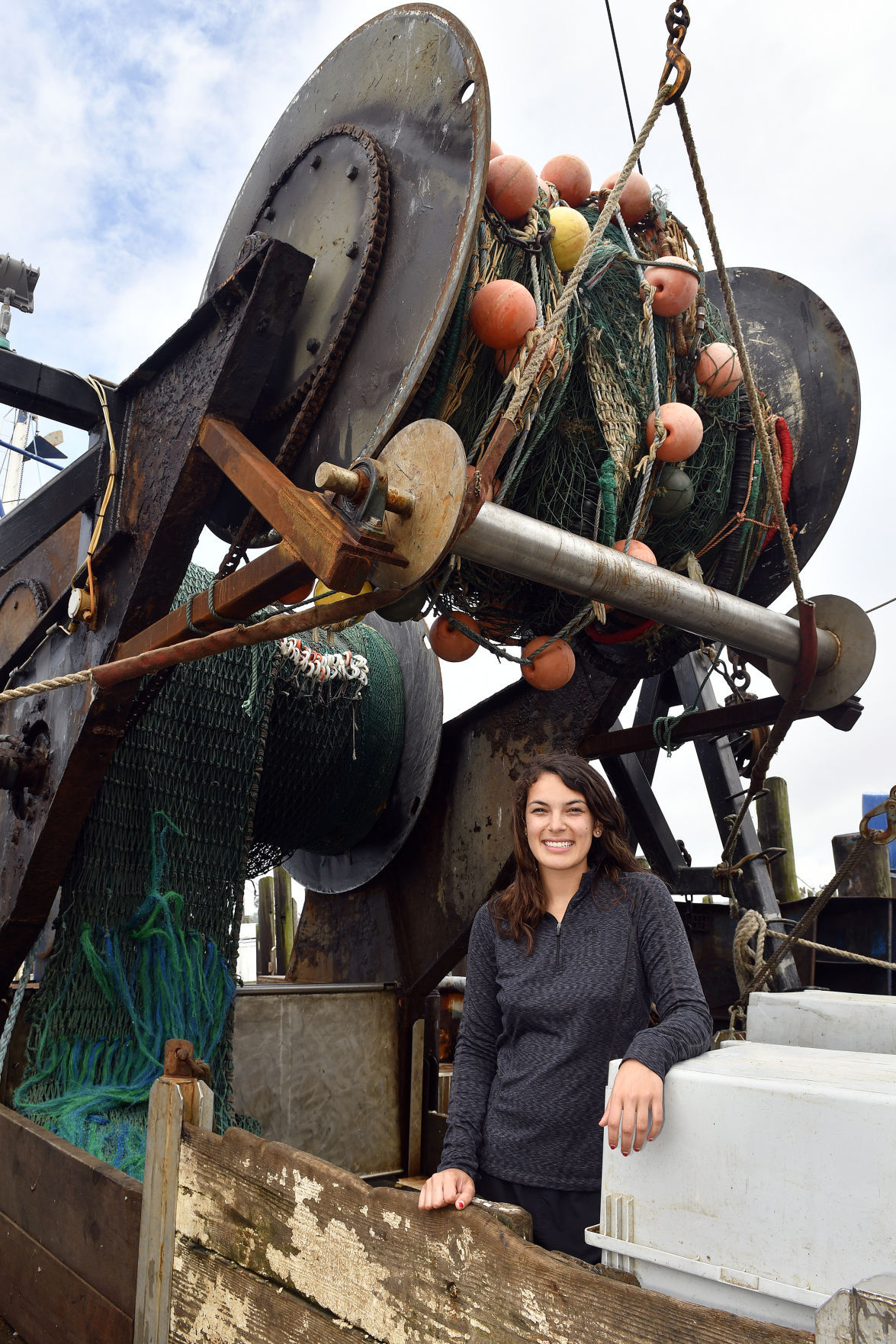 Northeast Fisheries Observer Tricia Perez is pictured on the deck of the Sea Rambler fishing boat in Galilee. 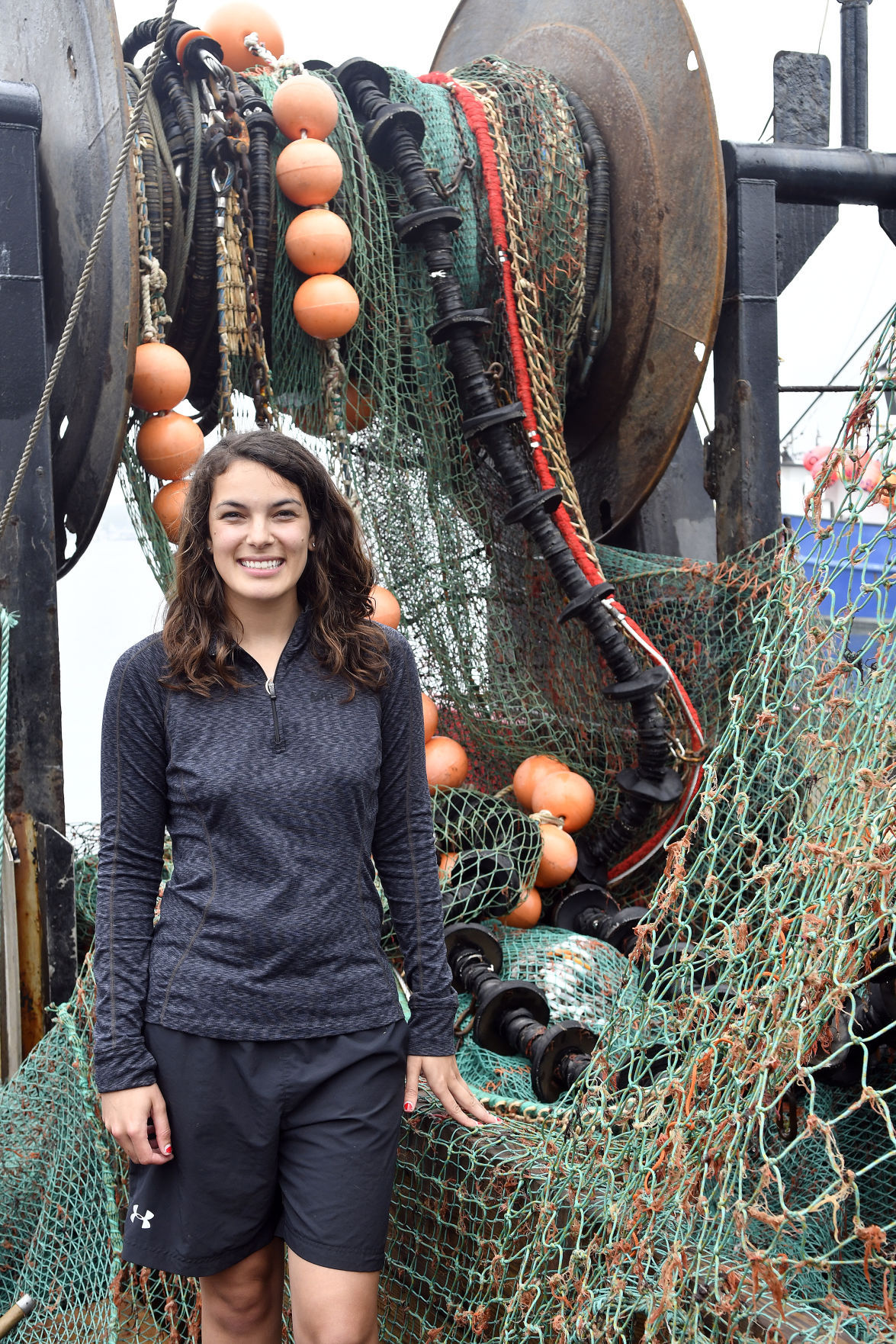 Northeast Fisheries Observer Tricia Perez is pictured on the deck of the Brooke Elise fishing boat in Galilee.

Northeast Fisheries Observer Tricia Perez is pictured on the deck of the Sea Rambler fishing boat in Galilee.

Northeast Fisheries Observer Tricia Perez is pictured on the deck of the Brooke Elise fishing boat in Galilee.

A career spent on the water is not for everyone – particularly those who have rarely, if ever, been aboard a boat.

For Tricia Perez, however, the lack of a seafaring past was no deterrent in pursuing a unique professional opportunity.

As a fisheries observer since 2016 – first with MRAG Americas, and now with A.I.S. Inc. – Perez gathers data for the National Oceanic and Atmospheric Administration and National Marine Fisheries Service on a contract basis. She works aboard fishing vessels, recording information on environmental conditions, a variety of sea life and the catches made by crews. That data is used for a variety of purposes, including fish population and catch management.

Educated in South Carolina, Perez has worked up and down the East Coast, including Maine and Long Island, New York. While the work has been a significant departure from her previous experience, she has found it fascinating.

Why did you become an observer?

I was really interested in fisheries, but I took a general marine science degree at the University of South Carolina. I was definitely a little scared applying; reading the job description, I had never been on a boat before. I definitely learned a ton, more than I ever could in a classroom.

What do you do on the boat?

I don’t really do anything with regulations, I’m not enforcement. Basically, I’m taking raw data, a snapshot of the oceans. So first, I get on the boat and check their safety stuff, their raft is OK, and their EPIRB, which is something that comes off the boat if it sinks to send a notification to the Coast Guard. I take the latitude-longitude of where they set the net out, the water temperature, how long they’re dragging, how deep it is. And then when it comes on deck, I basically try to get an estimate or even exact count of everything that’s in the net. So they’re going for fluke, sea bass, but they also catch other things like skates or fish that are too small to keep. I’ll separate everything by species and measure that weight of how much each species is there, and then I’ll also take lengths of the different species and age structures. A lot of the fish have ear bones called otoliths, and they have rings in them like a tree. So we send those into NOAA, and they can create a model like, ‘This fish is 46 centimeters and the age is two years,’ so you can pick up a fish, see how long is it and kind of guess what age it is without killing it and taking out the ear bones.

Probably one of our biggest things, and probably what really gets the funding going for this program, is marine mammals. We’re out there to take a lot of data on dolphins, sea turtles, sea birds and right now sturgeon as well.

Are you assigned to a specific vessel?

There’re two ways how you get on a boat. Basically anyone who’s going for groundfish, which include cod and flounder, you call into NOAA that you’re going fishing. All the boats are in different sectors and someone gets randomly selected in each sector. In Rhode Island, not a lot of people go for those fish because they’re more north ... it’s more just about talking to them and getting them to agree to take you. Now that I’ve got some captains I’m close with, I’m able to just call them and ask to go with them. I pretty much create my own work that way. Down here they’re going for squid, sea bass, scup, summer flounder.

Where else in the region have you worked?

I’ve really used the opportunity to travel. I went out on a big dragger in Portland. My home port used to be Gloucester, Massachusetts, and then I came to Narragansett last summer and fell in love with it. I spent two months last summer in Long Island, too. It’s funny because the fishermen know each other up and down New England.

How long do these trips usually last?

The longest I’ve been out with them is 16 days. In the winter the big boats go for a while. But in the summer is really when the day boat fleet can really excel, because that’s when the squid show up close to home. So I’m able to go on a bunch of day trips.

What’s your favorite kind of fish?

What’s done with the collected data?

It’s sent to NOAA and then there’s different end users that use it. So people that are doing population assessments can use our data, as well as other data collected. Fisheries-dependent data would be the observer program, because we’re going with the fishermen, and then there’s fisheries-independent data, which would be NOAA’s research vessel going out and taking random samples. That’s used for population or making quotas. They can use our data and other data to see where we are, like they’re allowed to catch this amount of squid, we’re probably at 50 percent, 70 percent, 90 percent, and that can help them know when to tell the fishermen to stop fishing [due to regulations].

What was it like being on a boat for the first time?

Going on the day boats, I know how far away we are, sometimes I could still see land. But the first time I went offshore was all the way to the Gulf of Maine. That was a 12-hour steam, and I was on a huge dragger, and I remember sitting on deck looking at the ocean thinking, ‘What is going on beneath my feet?’ Because when you see that big bag come on deck with all that fish, you think, ‘Wow that was right below me.’ There’s so much happening in the ocean and we’re trying our hardest to understand it. I think my data definitely helps, but I think it’s the last wild thing we have. The ocean is truly wild and we can’t control it.