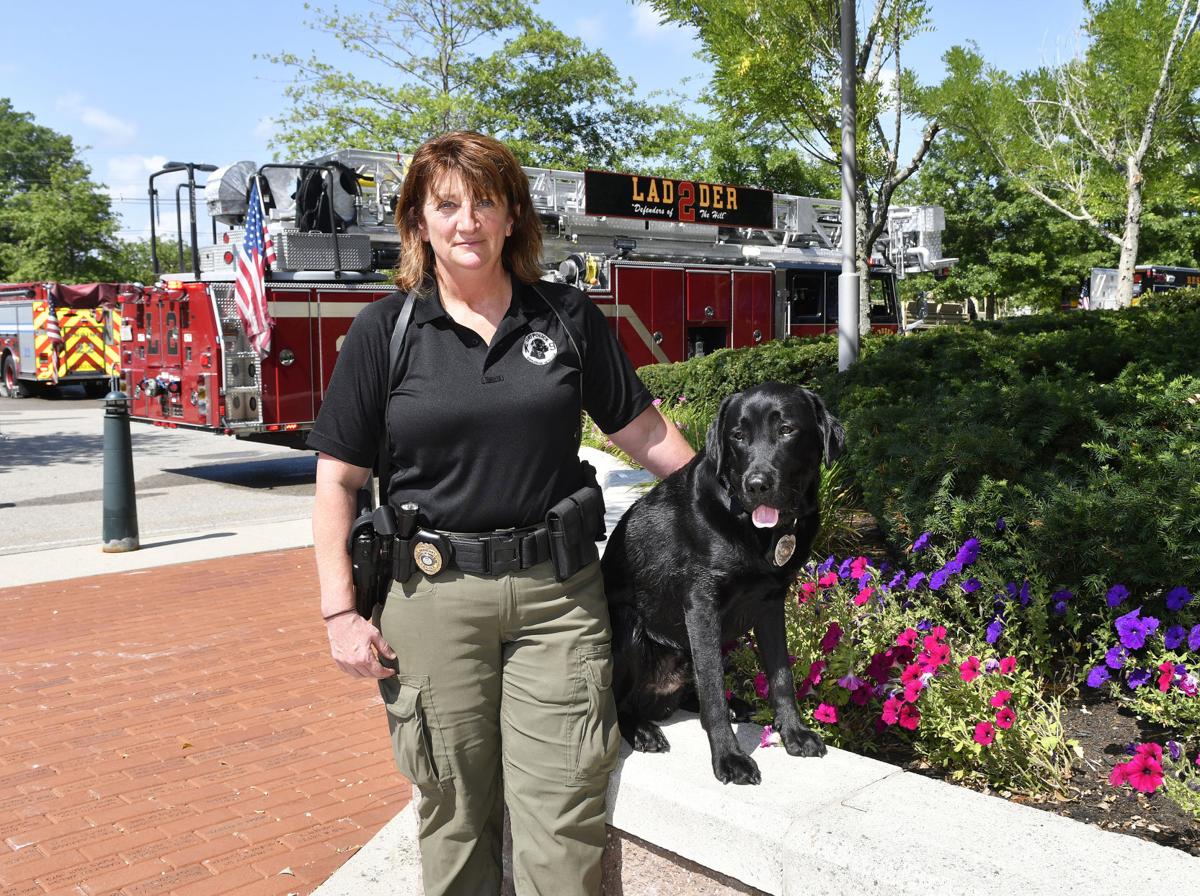 University of Rhode Island Police Sgt. Erica Vieira is pictured with Figaro, the department’s explosive detection dog, during a decontamination exercise held at The Ryan Center in early August. 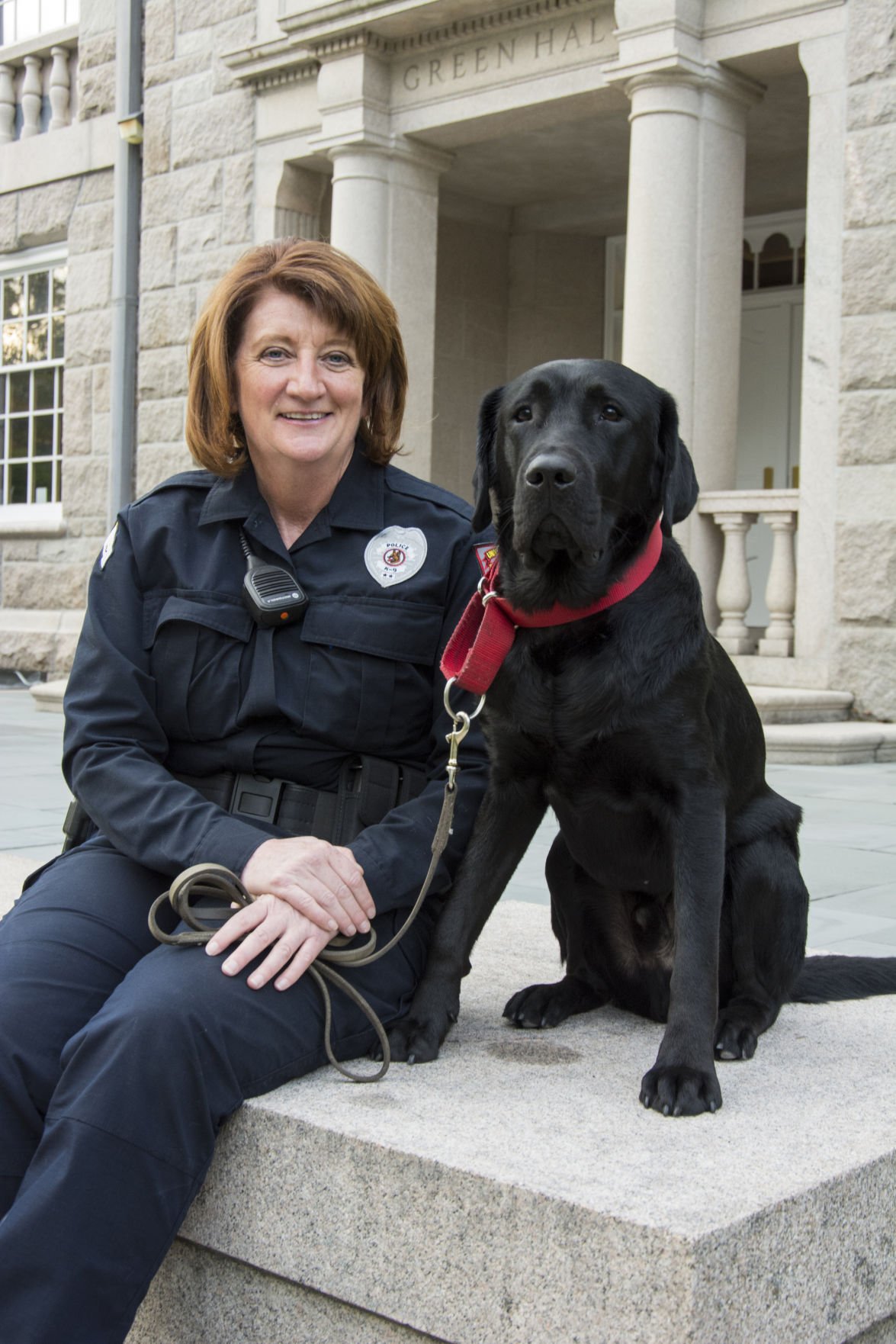 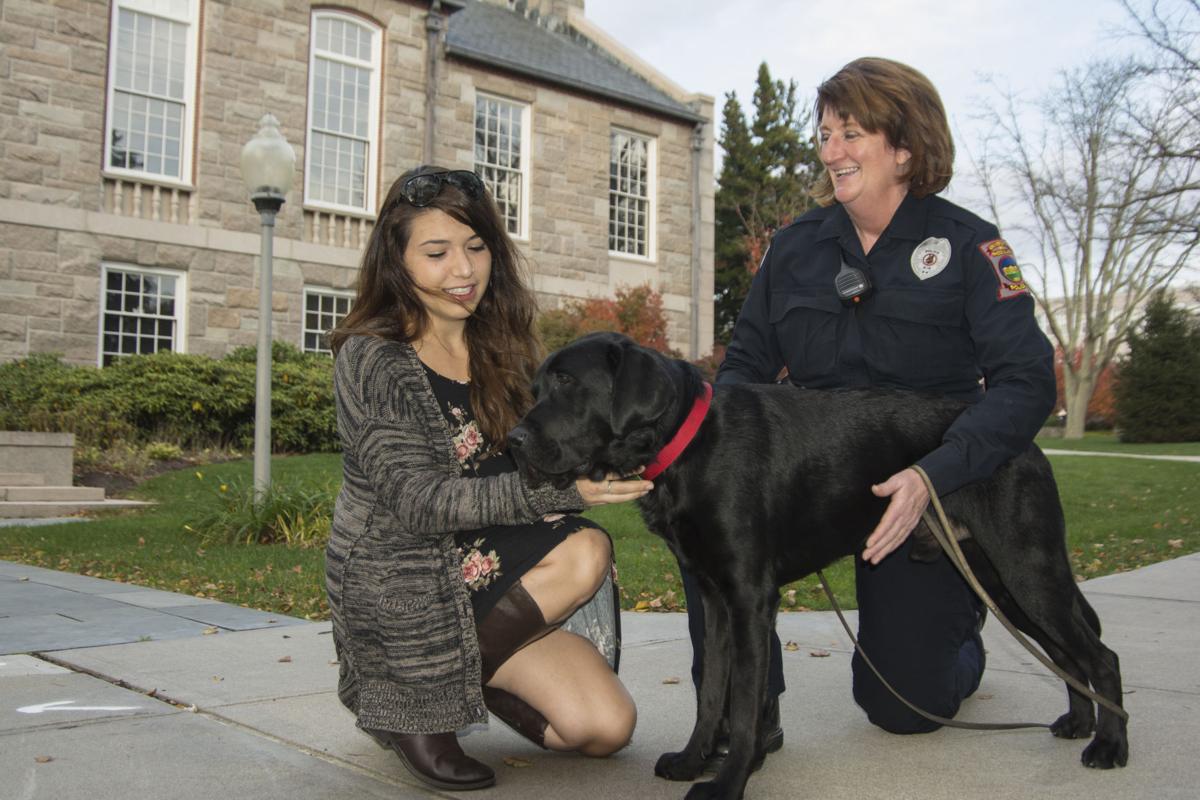 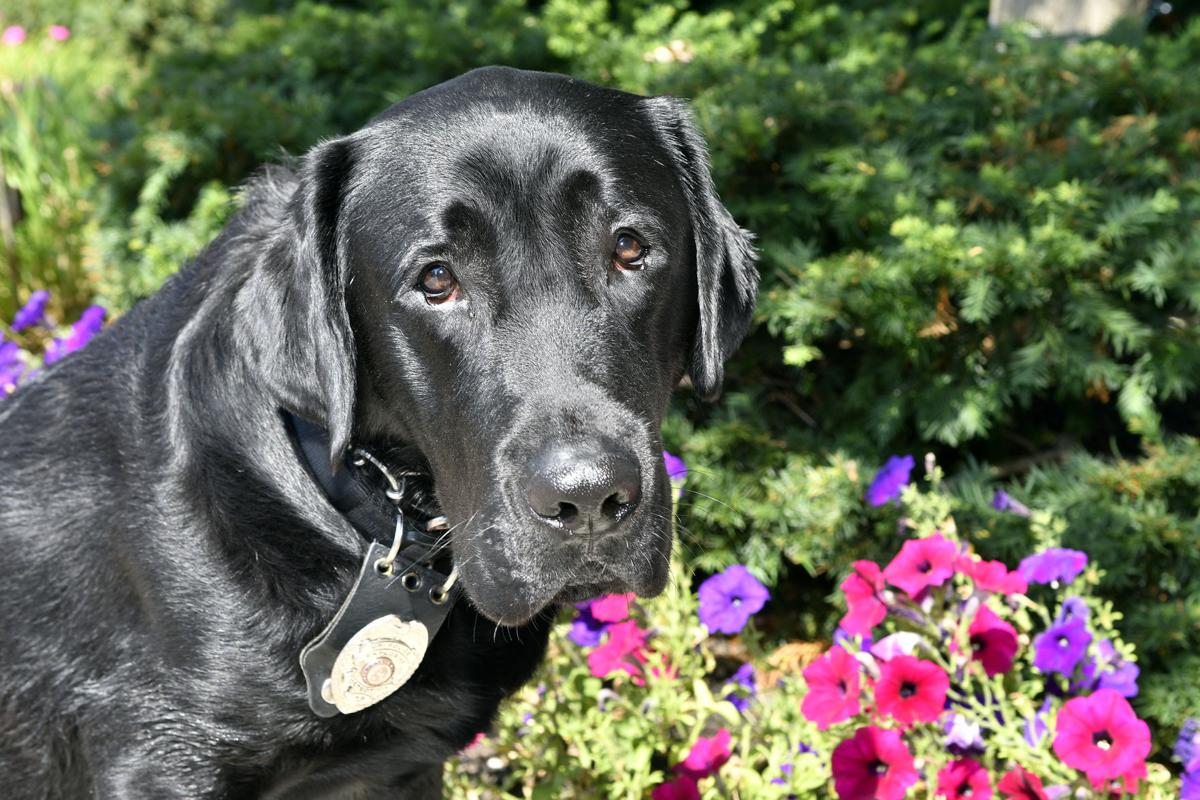 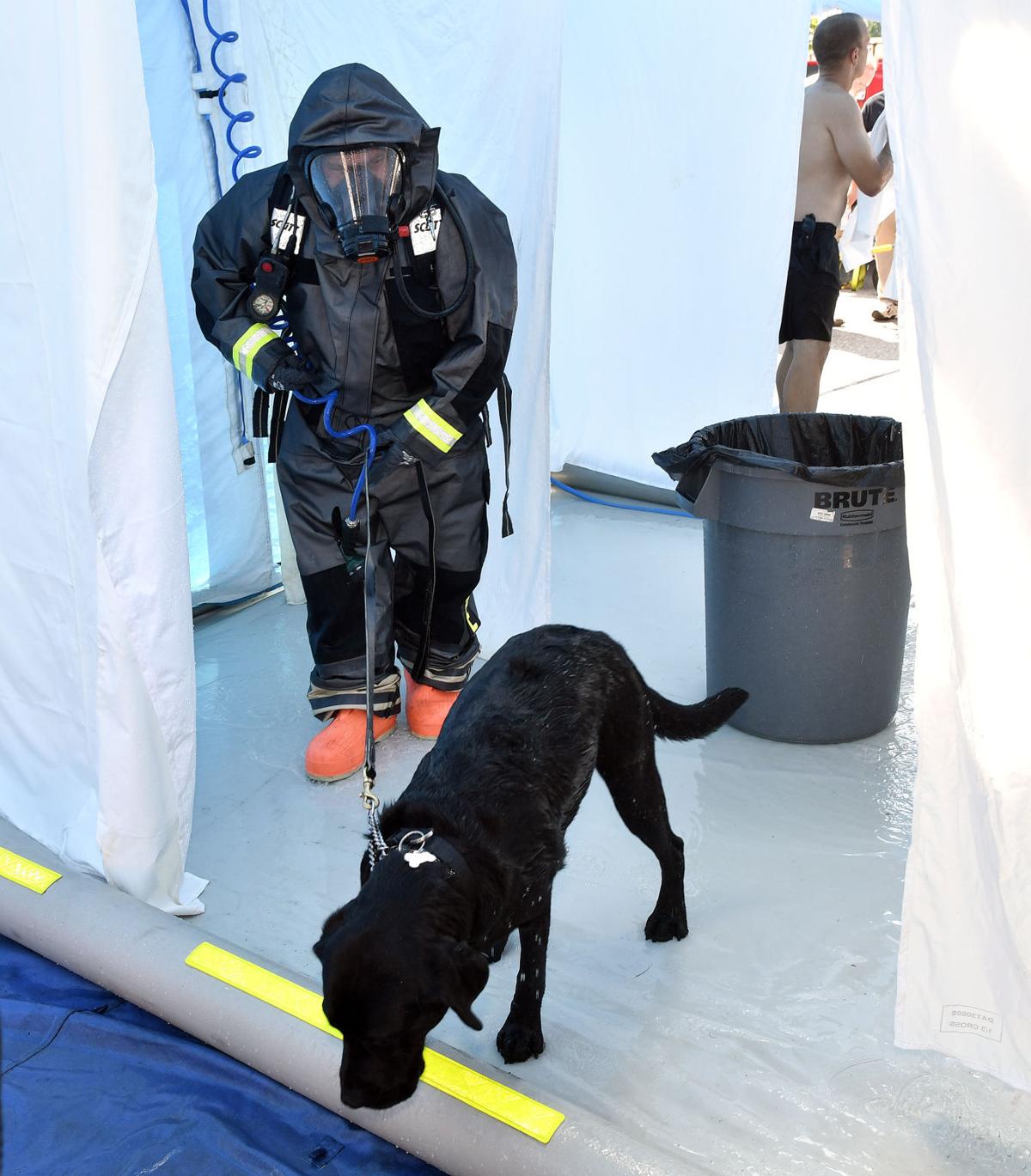 University of Rhode Island Police Sgt. Erica Vieira is pictured with Figaro, the department’s explosive detection dog, during a decontamination exercise held at The Ryan Center in early August.

When University of Rhode Island Police Sgt. Erica Vieira is on patrol around the Kingston campus, she is invariably accompanied by one of the newest members of the URI police department – Officer Figaro, a 2-year-old black lab trained to detect explosives. Vieira, who joined the department in 1989, trained with Figaro at the Connecticut State Police Canine Training Unit last year before bringing the dog to campus. Now, they’re inseparable. Figaro is one of just six explosives detection dogs in the state and what Vieira calls a “great spokesperson and a good reflection on the department.”

Vieira has previous dog handling experience as a member of the Rhode Island Urban Search and Rescue Team, for which she handled a dog trained to search rubble piles for people who are trapped alive. She also has two pet dogs at her home in Richmond.

Tell us about Figaro.

Figaro is a wonderful dog. He’s from the Guiding Eyes for the Blind breeding program. He actually passed the test to be a guide dog, but he had one issue: when he sees other dogs, his hair raises up on his back a little bit and he barks. He’s never ever been aggressive – he just wants to play with the other dogs – but he couldn’t do that with a blind person. He needs a handler, not a person to care for. The Connecticut State Police has an agreement with Guiding Eyes for the Blind to take dogs that don’t quite make it for one reason or another.

What kind of training did he have to undergo to become an explosives detector?

They test dogs for four disciplines – arson, bomb, computer chip and drugs. He tested well for explosives, so they imprinted him on quite a few thousand explosives for six weeks, and then I met him. We went to the academy together for an additional eight weeks and graduated in October. I continue to train with him every day. That’s the only way he eats. He only gets fed when he finds explosives. So I set out explosives, I’ll wait a certain amount of time, then I’ll work him in the area on the leash. It could be on a bus, in a building, outside in an open area, in a vehicle, wherever.

What has the reaction been on campus to seeing Figaro?

It’s been unbelievable. He’s a celebrity. I have cards for him – like baseball cards with his credentials on the back – that I pass out to people. Everybody wants to come up and say hello to him. He’s very docile. During exam time, I’ll go to the library and yell out “library break,” and everyone comes running. It’s tremendous to watch how the dog uplifts the students when they’re experiencing difficult times. No matter what I say, it doesn’t compare to what the dog does just walking in the room.

Why does URI need a bomb detection dog?

What do we do when we have graduation? We always have bomb dogs come sweep the area. The Ryan Center has concerts and sporting events that bring in large crowds. Some concerts are controversial. We’ll go in and sweep before these events. A lot of his work is preventative, but we’ve also responded to suspicious packages. You never know. That’s the whole thing. No one can say this is never going to happen. Just like a disaster – if you’re prepared and you have things in place already, and something happens, you can deal with it. And that gives the community a better sense of safety and security.

What do you enjoy most about working with Figaro?

It’s a sense of pride. You train every day to respond to a situation, and you know that anything can happen at any time, but you do the best you can and take the evidence that presents itself into consideration. He’s a tool, but he’s more than a tool. We’re a team, and we’re here for the safety of the university community. That’s our number one priority. That’s why we’re here.

Has Figaro found any explosives yet?

He finds something every night because I set things out to test him every night. And he’s found some fireworks. But otherwise, nothing. And I hope that’s the case for my whole career.