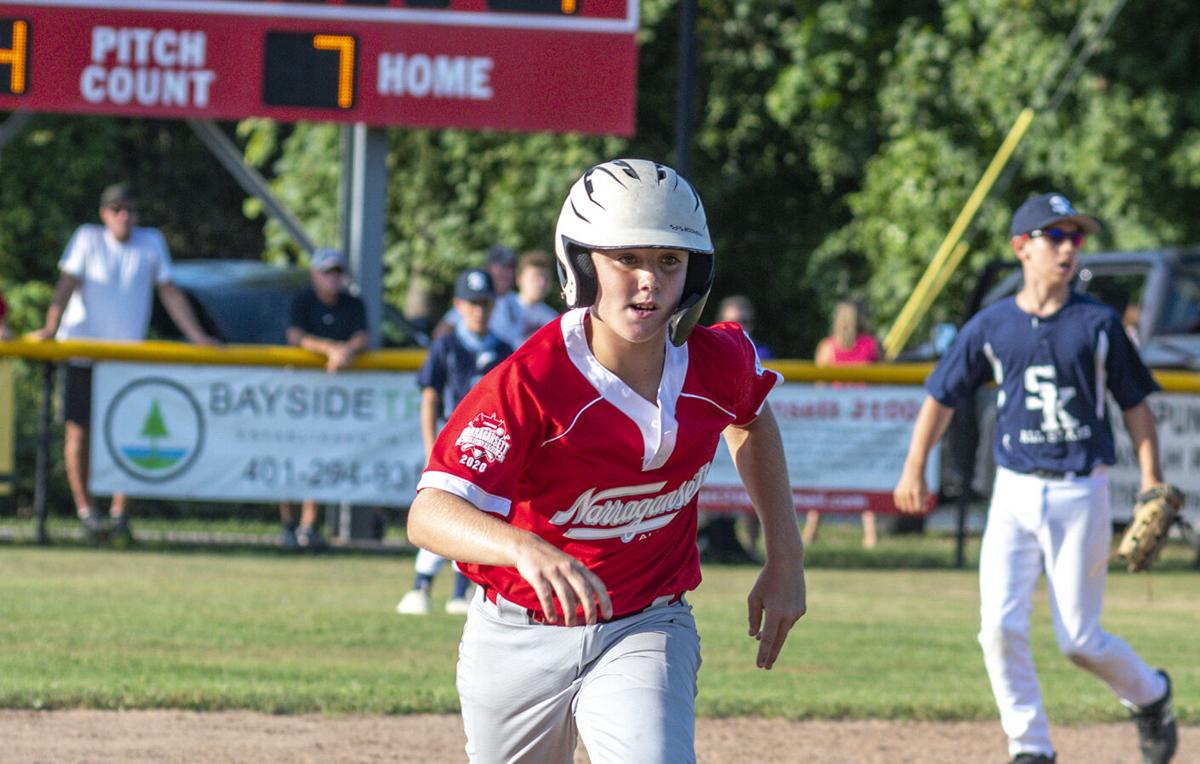 Narragansett's Lucas Previte races to third base during Friday's game against South Kingstown at Sprague Park. 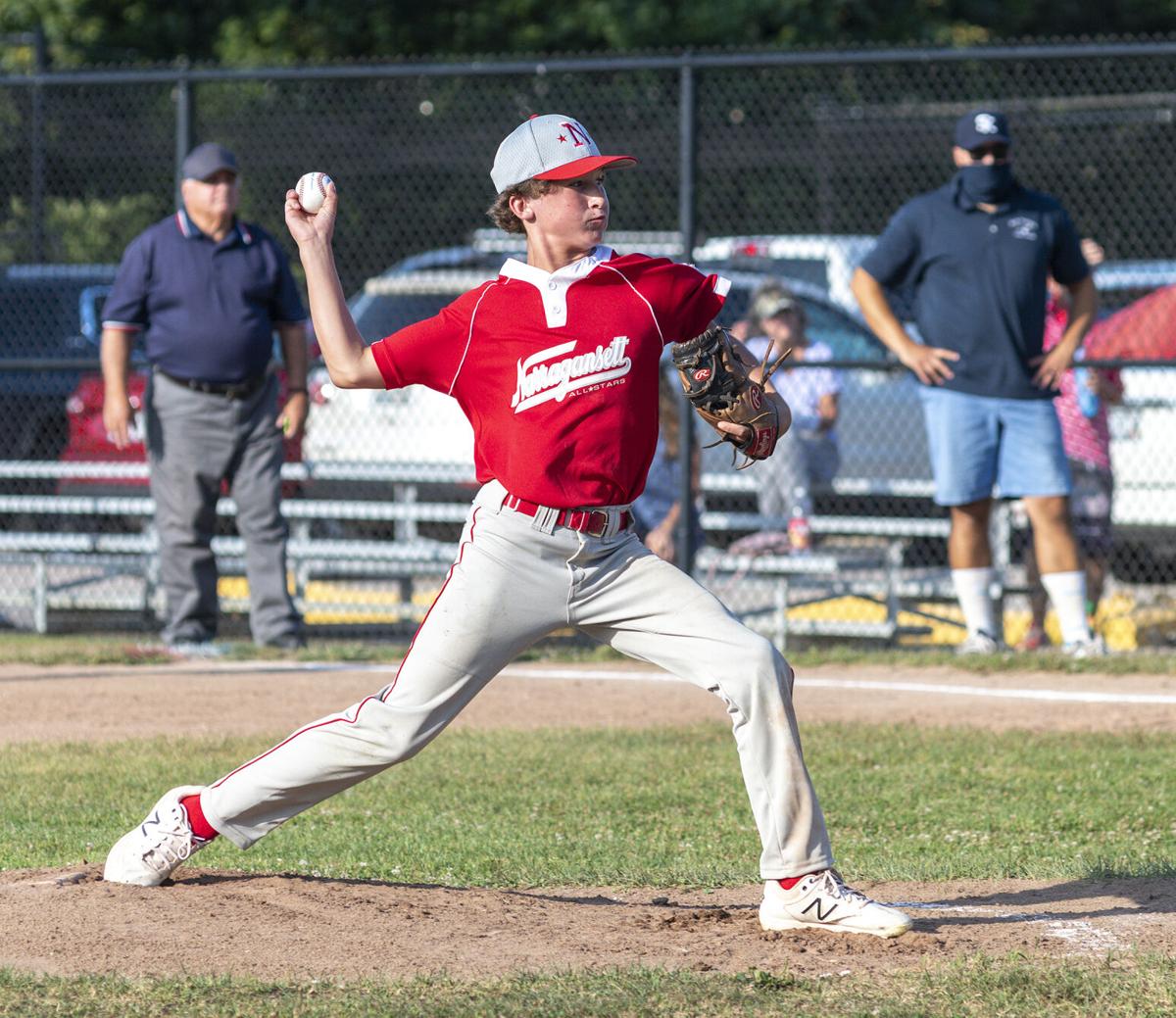 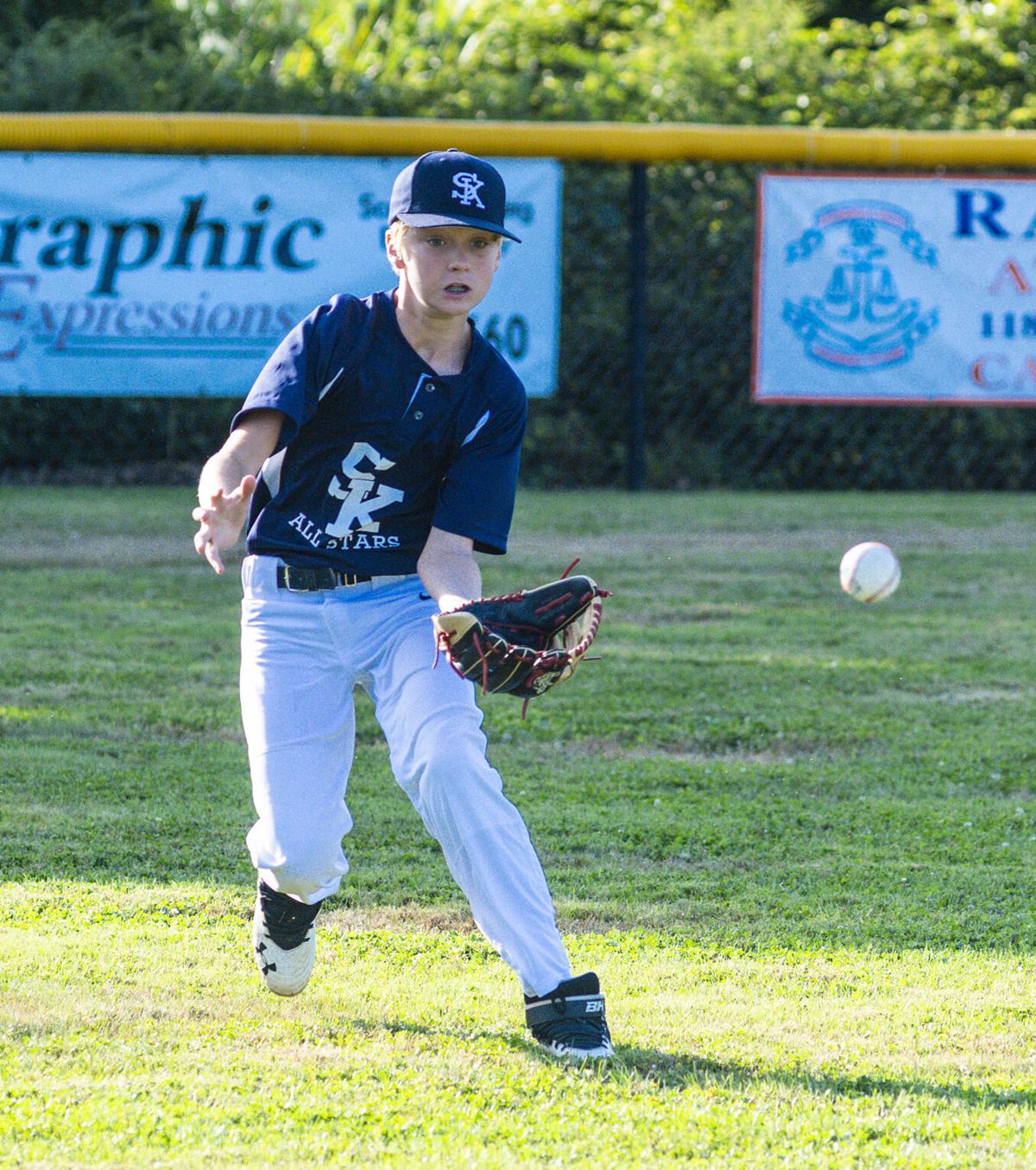 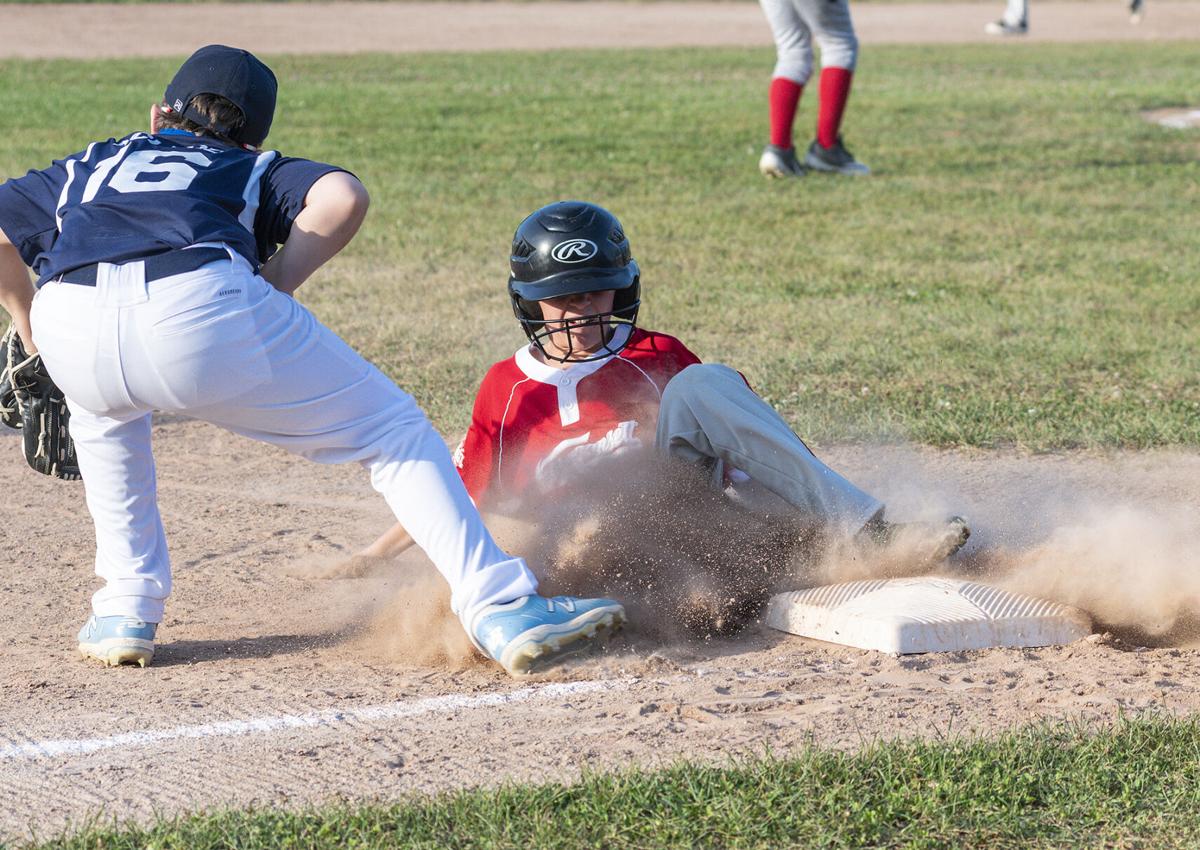 Narragansett's Aiden Plaziak slides safely into third base as South Kingstown's Sam McLeod waits for the throw during Friday's game at Sprague Park.

Narragansett's Lucas Previte races to third base during Friday's game against South Kingstown at Sprague Park.

Narragansett's Aiden Plaziak slides safely into third base as South Kingstown's Sam McLeod waits for the throw during Friday's game at Sprague Park.

NARRAGANSETT — The celebration was delayed by a comeback and then by rain, but the Narragansett Little League 12U all-stars made sure nothing could stop it on Friday night.

After losing a late lead in game two of the all-star series against South Kingstown and seeing the decisive third game get rained out on Thursday, Narragansett roared to an 11-1 victory to capture the series title at Sprague Park.

“Before the game today, we basically told the kids that we kind of had an embarrassing loss and this would be one of those games where you kind of show what you have,” Narragansett manager Todd Previte said. “Dig down deep, play with some heart, play for the guy next to you not yourself and come out and play as a team. And I think they listened to every word.”

The series was put together as a bonus for players whose all-star campaigns were canceled by the coronavirus pandemic. Narragansett had taken the first game of the series 2-1 and was three outs away from winning in a sweep last Tuesday, when South Kingstown rallied from an 11-5 deficit in the bottom of the sixth inning to win 12-5 and force game three.

South Kingstown picked up where it left off in the first inning of Friday’s game, as Brayden Rosen led off with a single and later scored on an RBI groundout by Luke Brock. But from that point on, it was all Narragansett, with a five-run second inning quickly turning the game around. Narragansett pounded out 14 hits, while pitchers Blake Grislis and Riley Cronin didn’t surrender another run after the first-inning tally. It was a complete performance after the first game of the series featured strong pitching and the second was defined by offense. This one had both – plus the finish that was missing in game two.

“I’m surprised we 10-runned them because they’re a good team, but that’s more of what I expect out of our team, certainly,” Previte said. “Fielding, pitching, hitting – we had a real good game tonight all the way around. It was really nice to see.”

Narragansett had threatened to score even earlier, loading the bases with one out in the first inning on a series of walks. South Kingstown cut a runner down at the plate and pitcher Dante Lepore induced a ground ball to shortstop that ended the inning.

It was only a momentary reprieve for South Kingstown. Lucas Previte started the second inning with a single. Aiden Plaziak and Ethan Smith did the same, with Smith’s infield hit scoring Previte with the tying run. An error allowed Plaziak to score the go-ahead run ahead of a two-run double by Grislis. Vito Paglia’s RBI single made it 5-1.

Cronin opened the third inning with a double, and Zayden Kent followed with one of his own to plate Cronin. An RBI single by Jackson DiFilippo made it 7-1.

Ethan Travis singled in the fourth and later came around on a groundout by Paglia. A base hit by Jackson Hohl and an RBI single by Kent upped the lead to 9-1.

In the fifth, Narragansett put the 10-run rule into play, with an RBI double by Smith and an RBI single by Brady Grislis.

“We had a really good night at the plate,” Previte said. “They looked pretty good at batting practice. That doesn’t always mean it’s going to happen, but it did tonight. And that stuff can be contagious, too.”

On the other side, Blake Grislis cruised through four innings, scattering four hits while striking out six. He had some help from his defense to escape a jam in the third. With the bases loaded and two outs, Nick Vellone hit a sharp ground ball to third. Hohl snagged it and stepped on third base to end the inning.

Cronin came on for the fifth and worked around a one-out single by Jack Sullivan to finish off the win. He recorded two strikeouts, including one for the final out.

“Blake’s a phenomenal athlete. He’s really a hockey player who plays Little League,” Previte said. “He threw really well. Riley coming in to close it for us was perfect. It worked out just right.”

Kent and Smith both went 2-for-3 with two runs scored and two RBI to lead Narragansett. Plaziak also had two hits and scored two runs. Blake Grislis and Paglia knocked in two runs each and Travis scored two runs. Every player in the lineup had at least one hit, and Narragansett batters didn’t strike out a single time.

“We didn’t face bad pitching tonight, either,” Previte said. “Those kids threw a lot of strikes, which is why we had to hit. I don’t think we had many walks either. We saw good pitching tonight. We just happened to get some hits. It was nice.”

The series was a success in its debut, with good crowds on hand and quality baseball. And there’s more to come for Narragansett, which will put an all-star entry into the tournament that Chariho is hosting late this month, which will amount to a de facto state all-star tournament.

“It was really nice that SK came and did this with us,” Previte said. “There’s a Chariho tournament and we’re going to go play in that. So we’re going to get a few more practices here, work on a couple of scrimmages and get a little bit more.”