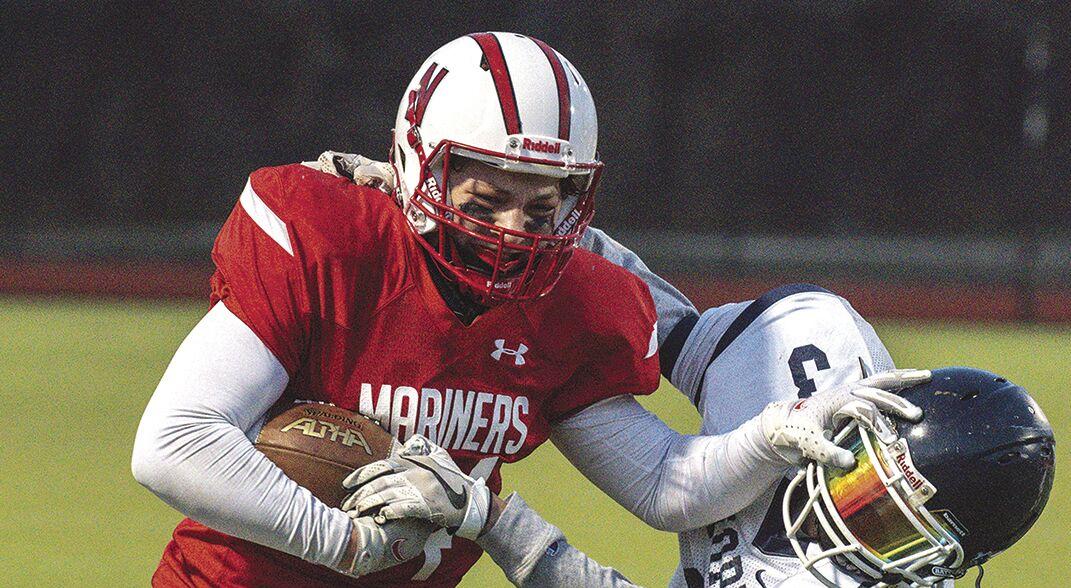 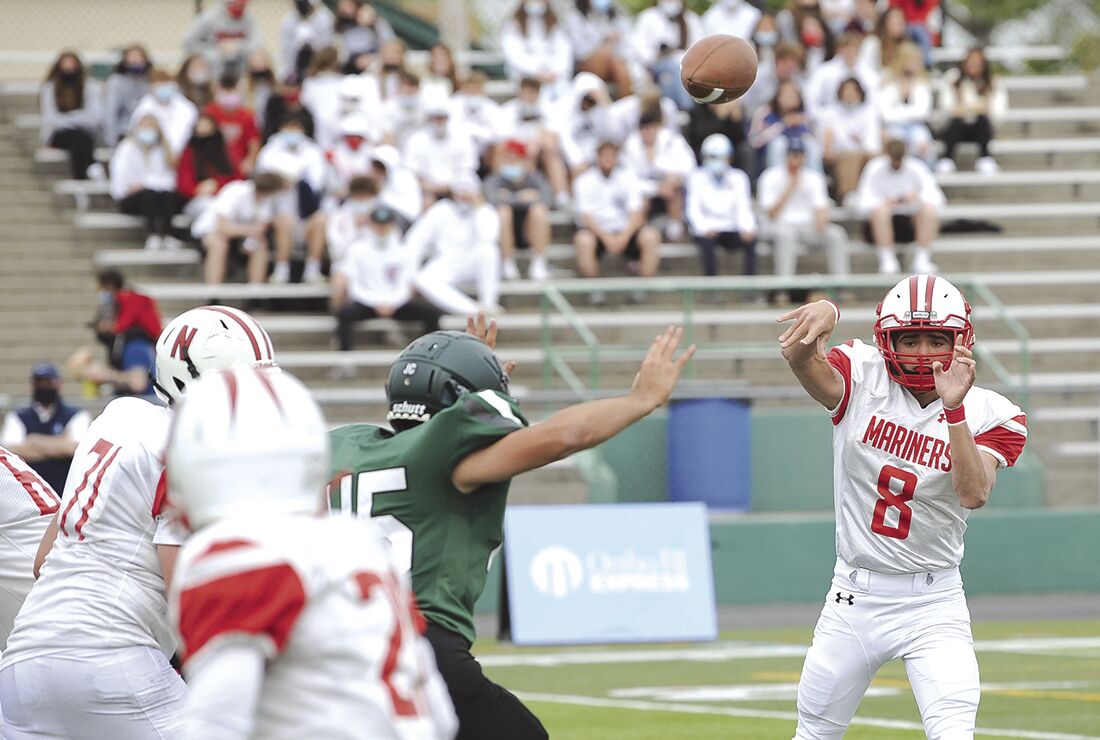 Phil Theroux is back at quarterback. 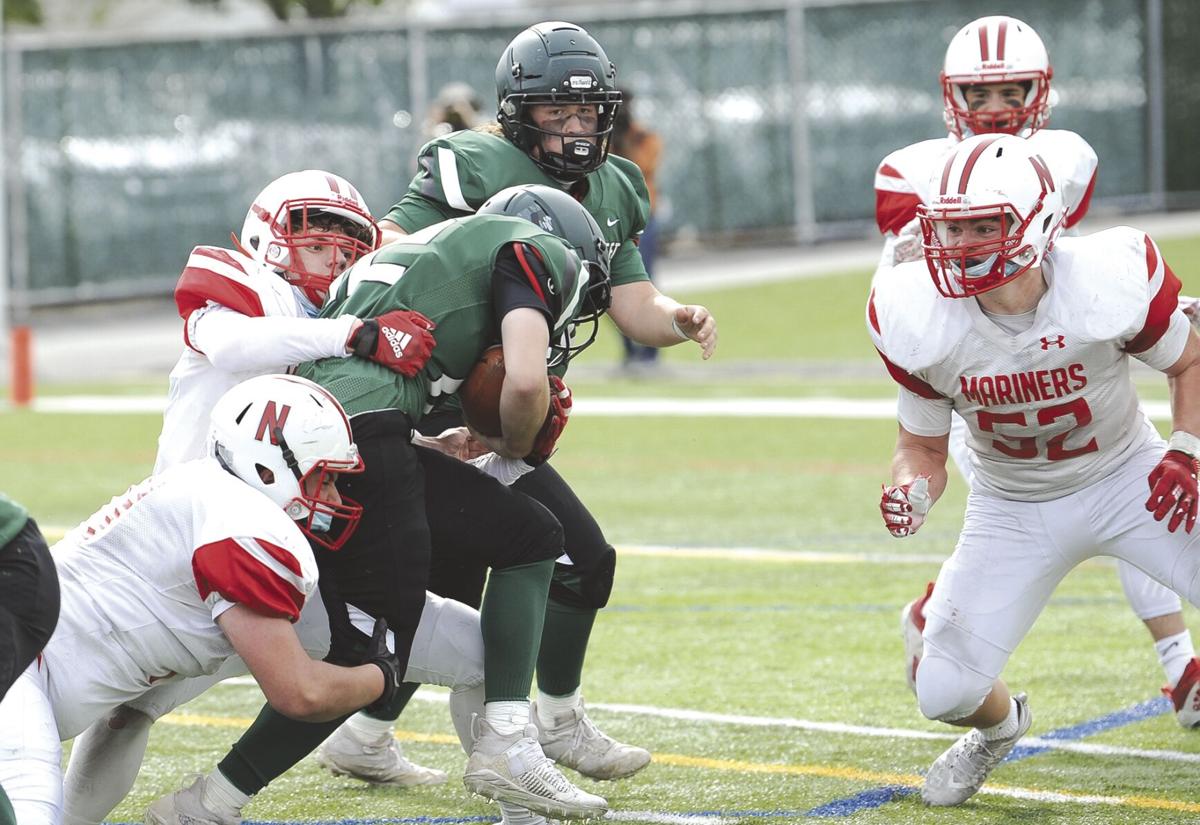 Phil Theroux is back at quarterback.

A new challenge awaits the champions.

Coming off its Division IV title in the spring season, the Narragansett High School football team is moving back to Division III this fall and aiming to ride momentum to more big things.

“The guys are up and they’re ready to play,” head coach Matt Blessing said. “We’re looking forward to the step back to D-III. I think they’re pretty motivated to go out there and try to continue the success we had last year.”

Though it wound up as a one-off in terms of alignment and timing, the spring season will retain a prominent spot in the rich history of Narragansett High School football. In a one-year alignment, the Mariners dropped to Division IV based on the RIIL’s realignment formula and promptly dominated the competition, going 5-0 and winning the program’s first title since 2003. The fact that it was a shortened season happening in the spring took nothing away as the Mariners celebrated on the turf at Cranston Stadium following their 21-13 win over Ponaganset in the Super Bowl.

The championship was the culmination of the program’s rise back to prominence after three straight losing seasons in 2014, 2015 and 2016. But the Mariners don’t plan to stop there. The bulk of the roster returns from the spring season and the numbers are still looking great, the surest sign of a healthy program.

“The numbers are up again,” Blessing said. “We’re kind of in a new phase with Narragansett football where we’re running in the mid-60s again with the numbers. We’ve got about 225 boys in the school. To have almost a third of the population out there for football is a pretty impressive number.”

Winning big added a layer of excitement and momentum as the Mariners got back on the field for summer workouts. They won the passing league at Exeter-West Greenwich and are primed to be a contender even as they face an uptick in competition.

“It was almost like playing spring football at the college level, where they come in and they’re just more tuned in with the system,” Blessing said. “It hasn’t been a year off. They’re coming in and the ideas are fresh. A lot of the personnel is the same. We won the passing league against some good competition, so that was a nice confidence builder.”

Senior quarterback Phil Theroux returns to lead the offense after manning the controls for the championship squad. Many of his weapons are back, including first-team all-division receiver Tyler Poirier and second-team all-division target Zach Bianco. They’ll fuel a passing game that was difficult for Division IV opponents to match up with, and that should remain a strength in D-III. The Mariners will miss Super Bowl MVP Brady Butler, who possessed game-changing ability as a slot receiver and running back. Anthony DiCicco has moved to tight end and had a strong summer.

Senior running back Reider Fry is ready for more after emerging as the team’s top threat when it wasn’t airing it out last season. Nick Nunez is also back, while good things are expected of Mekhi Wilson, who missed the spring season with injury.

First team all-division selection Colin Flynn heads the offensive line. He was a captain as a junior and one of the strongest leaders on the team. Flynn will move to center to replace all-division pick Sam Duckworth. The line also includes returning contributors Dom Conte, Sebastian Giramma, Danny Ashworth and Luke Webster.

Many of the same faces will man the front line on the defensive side, with Flynn behind them at middle linebacker. DiCicco will be a key player. The secondary features Bianco, Poirier and all-division selection Peanut Chaloux. Harry Lague, who made a huge defensive play in the Super Bowl win, will also be in the mix.

The Mariners are no strangers to success in D-III. Just two years ago, they got off to a 5-0 start before finishing up at 5-2. They were also a playoff team in 2017.

“We just expect to be competitive week in and week out,” Blessing said. “We’re not looking at any team and underestimating anybody. Not that we were doing that last year, but I don’t think we’ll see those kinds of lopsided victories that we saw with some of the teams that were struggling to get numbers out there. Division III, week in and week out, there’s a lot of good teams.”