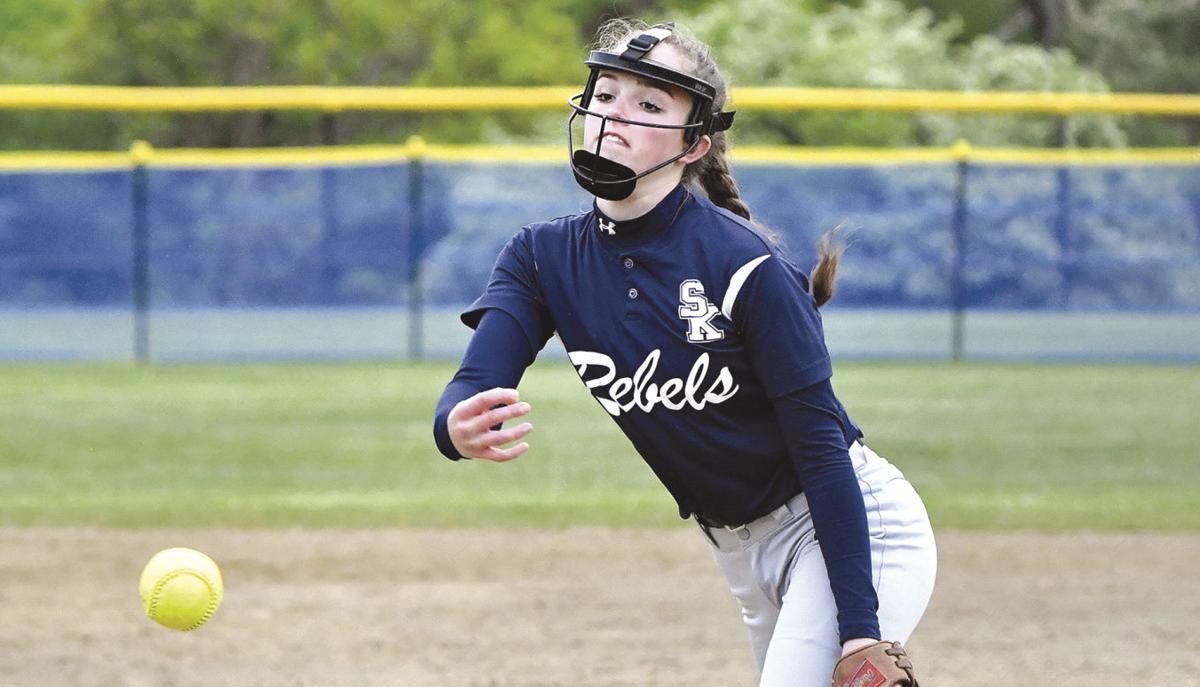 South Kingstown's #2 delivers a pitch during Tuesday's game against Narragansett at the Broad Rock Play Fields. 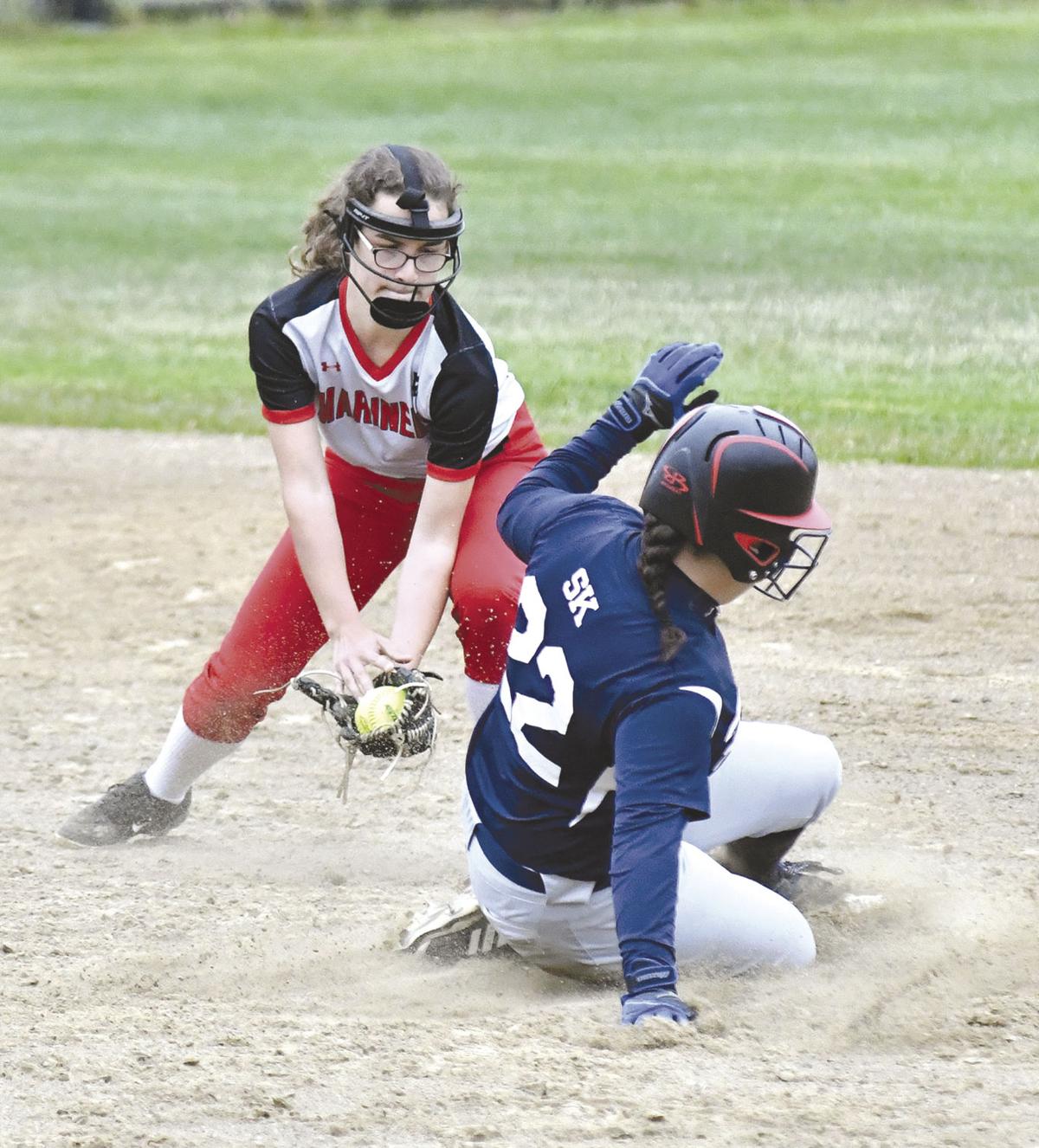 Narragansett shortstop Lindsay Moricas doesn't get the throw in time to tag out South Kingstown's #22 at second base during Tuesday's game at the Broad Rock Play Fields.

South Kingstown's #2 delivers a pitch during Tuesday's game against Narragansett at the Broad Rock Play Fields.

Narragansett shortstop Lindsay Moricas doesn't get the throw in time to tag out South Kingstown's #22 at second base during Tuesday's game at the Broad Rock Play Fields.

The opening round of the Division II playoffs brought them together on Tuesday, and the Mariners left the matchup wishing they had made a better impression on their rivals.

Winners of seven straight to end the regular season, the Rebels rolled on with a strong all-around performance. Samantha Hutchins pitched a one-hitter, Keaira Richardson homered and the defense didn’t make an error in a 10-0 victory.

“We’ve been doing really good,” Richardson said. “We have a lot of effort going into this. We’ve had a positive attitude throughout the whole season. And we have a lot of positive thoughts about the playoffs.”

The second-seeded Rebels advanced into the quarterfinal round, where they’ll face either Johnston or Portsmouth in another single-elimination game this afternoon. The winner of that game moves into the semifinals, at which point the bracket becomes double-elimination.

After a 14-2 regular season, South Kingstown has designs on a deep run. Only the star pitchers at St. Raphael and Scituate have gotten the better of the explosive Rebel attack so far.

“We work on the fundamentals and we work on the execution of situations every day. We need everything to click,” head coach Steve Chadwick said. “As we get going, there are going to be other teams that can play. I don’t think anybody can hit it like us, but they can pitch it like us.”

A rivalry game represented the first hurdle to a playoff push. Coming off a 10-7 regular season and boasting a powerful offense of their own, the Mariners hoped to spring an upset. Instead, they committed five errors, which gave the Rebels help that they didn’t already need.

“Tough matchup, but I know we can play with them,” Narragansett coach Mark Paliotti said. “They hit one through nine, but the thing is, we gave them a bunch of errors. You take those off the board, it’s totally different. We’ve played some good games and we’ve played some games like this. Disappointing. We had a nice crowd here and everything. We just didn’t play that well.”

Hutchins quieted the Narragansett bats, particularly the potent top of the order. Hannah Foster had the only hit, a single in the third inning. Kiana Fanning missed a home run by a few feet in the third inning as a deep drive drifted foul, but that was the extent of the Narragansett scoring threats. Hutchins did walk four but ended each inning in which she issued a walk with a strikeout.

“She was on. She was excellent,” Chadwick said. “She was in and out, hitting her spots.”

The combination of big bats and extra outs set the stage for another offensive explosion in a season full of them, as the Rebels reached double digits in runs for the 13th time in 17 games. An error, a single by Faith Hutchins and a two-run single by Richardson powered a three-run first inning. Liz Maciocio upped the lead to 4-0 with an RBI single in the second, after Kacie Curran reached on an error.

The Rebels tacked on three more runs in the third as Richardson singled, Julia Bollentin reached on an error, Hannah Loftes bunted a run home and Rylee Smith knocked in a run with a base hit and later scored on an error. In the fifth, Richardson provided the exclamation point with a two-run homer that made it 9-0. Samantha Hutchins then invoked the mercy rule in the fifth with an RBI single.

“We’re pretty confident,” Richardson said. “We usually try to go out, wait for our pitch and just drive the ball. Everyone just seems to pull it together and hit dingers.”

Richardson has been hitting a lot of them, with home runs in three consecutive games, including a ninth-inning walk-off blast in a senior night win over Toll Gate.

“That was an amazing feeling, especially on senior night,” Richardson said.

While the Rebels are moving on, Narragansett will regroup with an eye on next season. Most of the lineup returns with a lot to build on.

“I’ve got a great bunch of kids coming back so we have a lot to look forward to,” Paliotti said. “It was a nice year. Made the playoffs, which is what you want to do.”

“Just one game at a time,” Richardson said. “Getting outs, staying focused every inning, and just moving the line when we’re hitting.”