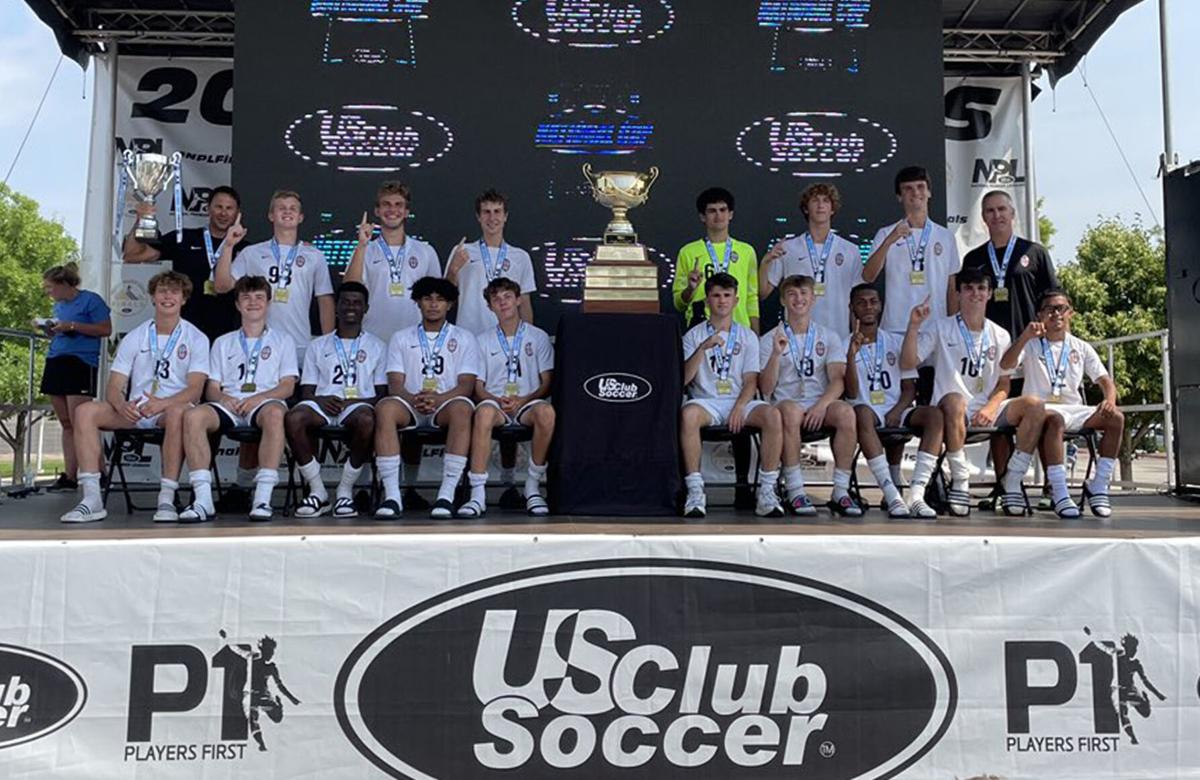 The Bayside United team on stage with its trophy. 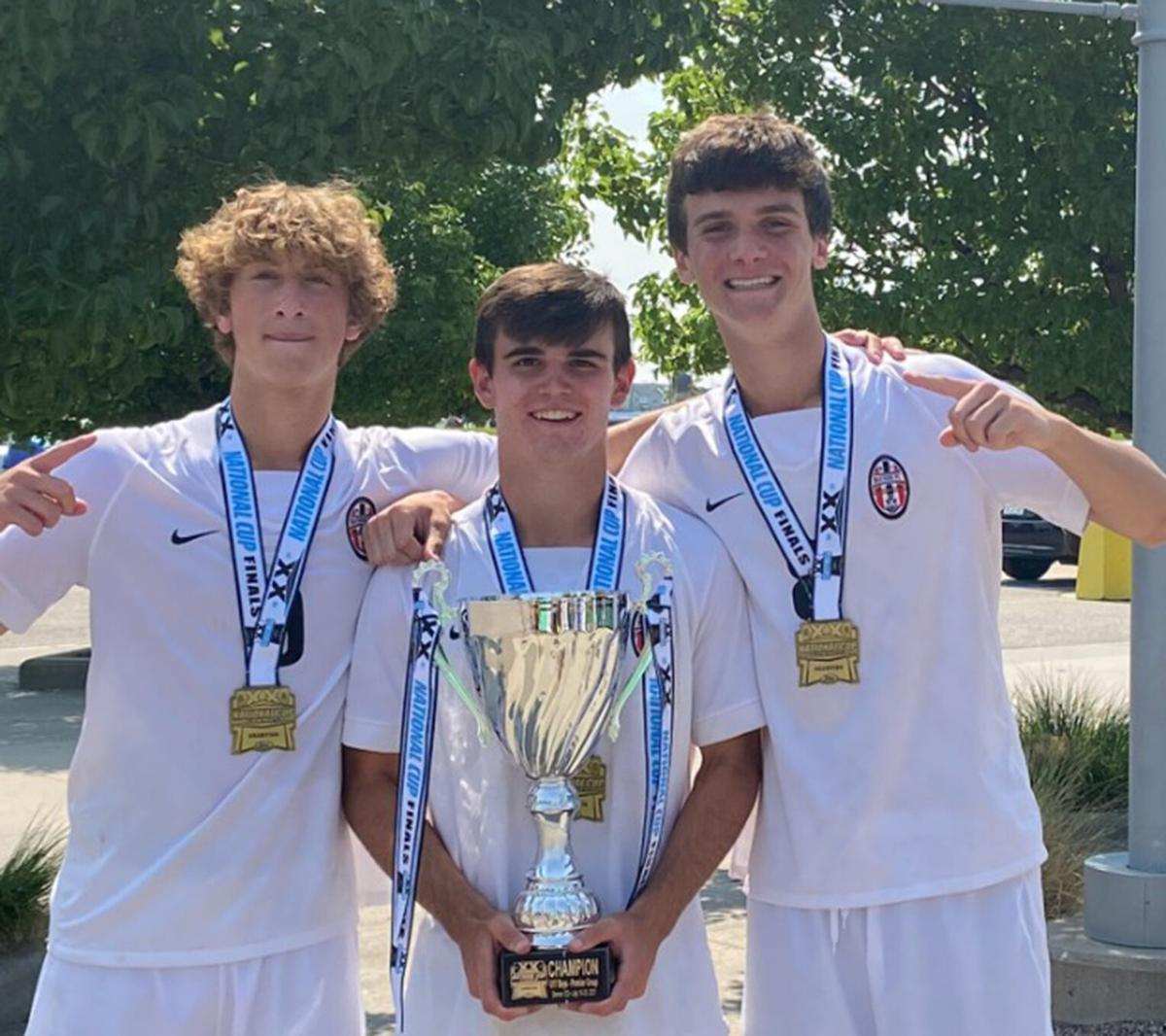 The Bayside United team on stage with its trophy.

This club soccer season represented the last ride for a group of Bayside United players who have been together for much of their careers.

And they went out with a bang.

With several South County players helping to lead the charge and two former stars as coaches, Bayside’s 2004 South Boys won a US Club Soccer national championship in Colorado last month, the top prize for club teams around the country.

“Huge accomplishment for the boys,” said coach Steve Froberg. “A lot of the guys have been together for the last six or seven years. This year is kind of the last year that this group will be together as a full group. We were kind of calling this our last hurrah or our last dance, so to speak. So for us to finish off winning a National Cup was obviously something pretty special for the group.”

The core group of players started playing together years ago as a South County based squad under the umbrella of Global Premier Soccer. When that Massachusetts-based organization shut down, the group migrated over to Bayside United and found a perfect fit.

“The Bayside president, John Mark Andrade, is a friend of ours and we have a ton of respect for him,” Froberg said. “Dave DeMello was a roommate of ours in college and he’s the director of coaches. So we thought it would be a great fit for us and it was. We had the ability to train on turf all year round against our other half, another ‘04 team. We trained against them twice a week, kind of beat the crap out of each other twice a week. So once we got into league play, we had already faced the best.”

After a year of limited action due to the pandemic, they were back to full go this spring and summer, but they didn’t have the smoothest entry.

“We just couldn’t score,” Froberg said. “The first few games, the first tournament we went to, we scored one goal in our first five games. So we were kind of struggling out of the gate. Then we got our feet underneath us, made some adjustments, and the kids really bought into making improvements and learning from their mistakes. We kept getting better and better as the season went on.”

At the Mid-Atlantic Regionals in New Jersey, Bayside had only 13 players in uniform for a busy weekend of games amid temperatures in the 90s. They battled through it and beat a New York team to clinch a trip to the National Cup, where they would compete in the U17 Premier Division.

In Colorado, the team went 2-0-1 in group play. It beat the Chicago Sockers 3-2, then fell behind the Honolulu Bulls 2-0 before rallying for a 3-2 win. Needing a tie to advance to the finals, Bayside played the Arkansas Comets to a 1-1 draw.

With the championship on the line, Bayside played its best game of the year. The defense notched a shutout and five different players scored in a 5-0 win.

“It was truly a team accomplishment,” Froberg said. “We won 5-0 in the final game and five different guys scored. We just put it all together. We had already played the Honolulu team in group play. We said to the boys, ‘This is your team, this is your last stand, what do you think we should do here in the finals?’ They came up with a few different suggestions, some corner kick plays and things like that. Our first goal was on a corner kick that they designed. Then we scored again and we were just on fire – running on all cylinders. Hawaii just didn’t have any answers for us.”

After celebrating on the field, the squad got to celebrate again on the trophy presentation stage, something they’d been wanting to do since a 2017 trip to the National Cup ended in the semifinals.

“It was a pretty special experience, seeing the kids celebrate up on stage,” Froberg said. “We went out in 2017 and we lost in the semis. I remember then, kind of looking at the stage. It’s almost like the Stanley Cup – you can’t go up there if you don’t win it. As we were leaving, we walked by the stage, we looked at and we were like, ‘We’ve got to get back here.’”

It was an amazing moment for coaches Froberg and Bradley, too, as they watched their sons reach a new level of achievement.

“We played together growing up and played for his dad at URI,” Froberg said. “Now our kids are playing together. It’s kind of the next generation. It was a cool experience for the two of us to see our kids accomplish something we were never able to accomplish as players.”

Throughout the tournament, the benefits of having played with each other for years were on display. That’s not always a given in the world of club soccer. With the core group intact and some key additions along the way, Bayside was primed for its big finish.

“Club soccer, you often see a lot of turnover in some of these clubs. They continue to bring in the next best kid, next best kid,” Froberg said. “We kept a lot of our core together and they’ve just grown together on and off the field. You can just tell from the activities we did – team dinners, we went rafting when we were out in Colorado. Not just the kids, but the families too. We’ve grown to become best friends with the families.

“When it comes down to it and you’re down 2-0, can you depend on your teammates? These guys look across the field and they’ve known them for years and they know they can depend on each other.”

Players will move on from this group next year as they join regional teams or squads in the Elite Club National League. But they made the most of their last chance.

“When families were trying to decide if they were going to be able to go out there, I told a couple of the kids, ‘This is something you guys are going to be talking about when you’re 70 years old, sitting in a rocking chair. You’ll be sitting around talking about winning a national championship together,’” Froberg said.