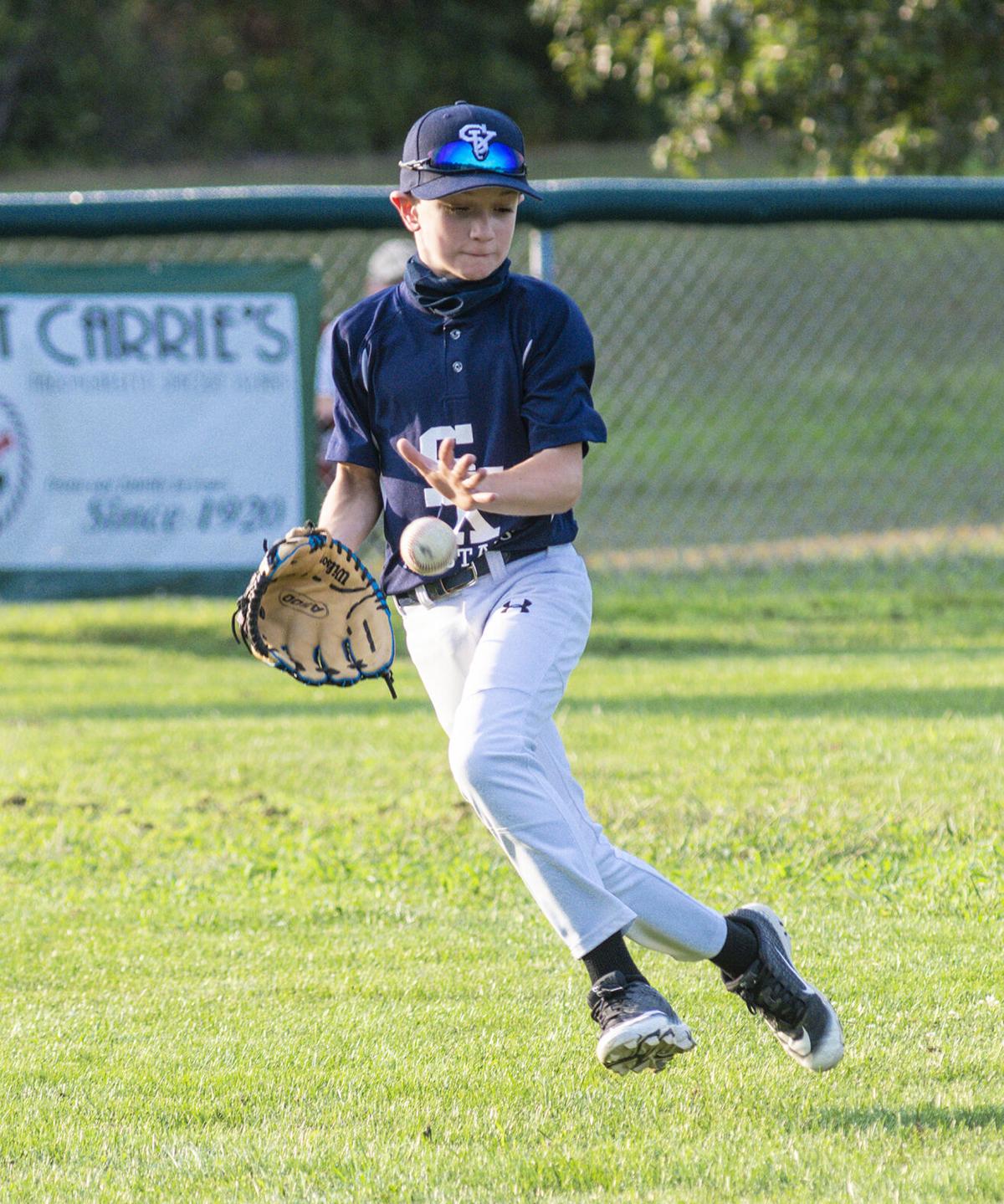 South Kingstown's Jack Sullivan makes a play in the outfield during Tuesday's game against Narragansett at Tuckertown Park. 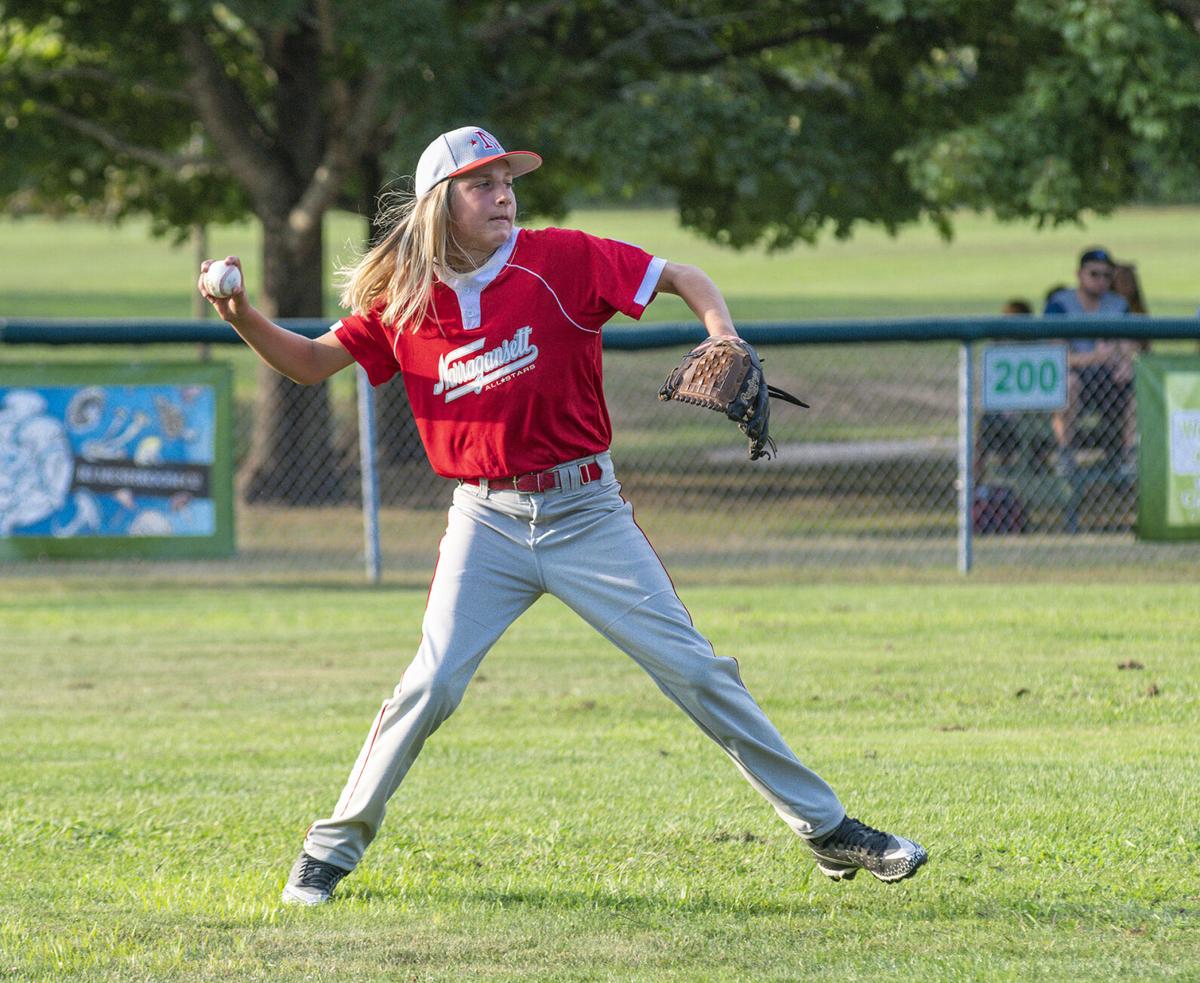 South Kingstown's Jack Sullivan makes a play in the outfield during Tuesday's game against Narragansett at Tuckertown Park.

SOUTH KINGSTOWN — Thanks to a dramatic comeback, the summer baseball season will last a few more days for the South Kingstown and Narragansett Little League 12U all-stars.

Narragansett was three outs away from a sweep of the best-of-three all-star series between the neighboring leagues, but South Kingstown rallied from a six-run deficit in the bottom of the sixth inning on Tuesday night for a 12-11 victory at Tuckertown Park.

“It was fun,” South Kingstown manager Rob Young said. “Now they get another game. They get to play a little more baseball.”

Narragansett had taken the opener last Thursday at Sprague Park, winning a pitchers duel by a 2-1 score. Offense took over in game two, and Narragansett had more of it for five innings, carrying an 11-5 lead into the final frame before South Kingstown’s comeback. The series will return to Sprague for the decisive third game of the series on Thursday at 7 p.m.

Created amid this year’s unusual circumstances, the all-star series is giving players at least a taste of the Little League postseason. All-star teams typically play in district tournaments, with the winners off to states, regionals and ultimately the Little League World Series. Amid the coronavirus pandemic, Little League International canceled the regional and World Series rounds, and most state and district tournaments were called off at the local level. Narragansett and South Kingstown both staged modified regular seasons in the summer instead of the spring and got together to create the all-star series for both the 12U and 10U age groups.

“I’m really glad we were able to do something like this, especially for the 12-year-olds since it’s their last year,” Narragansett manager Todd Previte said. “Most of my team, they’ve been together since they were 8 and they’ve gone all the way up. The fact that SK came to do this with us is great.”

The rally began in a flash – after a flash. Lightning forced a brief delay in the bottom of the sixth inning, when Dante Lepore was down in the count 0-2 against Narragansett pitcher Zayden Kent. After the break, he chopped the first pitch he saw to shortstop and beat the throw for an infield single. An error on a ground ball by Luke Brock and an infield hit by Luke Cruff loaded the bases with nobody out.

Sam McLeod followed with a ground ball to first. Ethan Travis made a nice scoop and fired home but Lepore touched the plate before the throw, making it 11-6. A terrific diving catch by Aiden Plaziak on a line drive to center by Matt Clark got the first out for Narragansett, though Brock tagged up and scored to make it a four-run game.

A bunt single by Jack Sullivan plated a run, and another scored on an ensuing throwing error to make it 11-9. Kai Young then singled, moving Sullivan to third, and stole second, which put the tying run in scoring position.

Reliever Jackson Hohl recorded the second out with a strikeout and got South Kingstown down to its final strike in a 3-2 count against Jake Brock. But Brock worked a walk to load the bases again. Gavin Marsh followed with line drive to center field that scored Sullivan and Young to tie the game.

“That was the bottom of the order that got it going,” Young said. “They battled. They hung in there. Super proud of them.”

After an intentional walk to Brayden Rosen, a wild pitch allowed Brock to scamper home with the game-winning run.

Nick Vellone helped set the stage for the rally with two scoreless innings of relief, the first such clean frames South Kingstown pitchers had managed. Before that, Narragansett’s bats and South Kingstown’s miscues added up to big totals.

Blake Grislis and Travis led off with base hits and Lucas Previte had a two-run double to highlight the four-run first inning for Narragansett. A single by Plaziak, an RBI double by Grislis and an error led to a pair of runs in the second inning. Previte had another RBI double in the third and Plaziak had an RBI single, with additional runs scoring on an error and a sacrifice fly by Travis. Brady Grislis delivered an RBI single in the fourth to cap the scoring for Narragansett.

For South Kingstown, Jack Noonan hit a two-run single in the second inning to lead the early comeback efforts before the real thing took off in the sixth.

The slugfest was a far cry from the game one pitchers duel. Blake Grislis scored on a wild pitch in the second inning and Travis tripled and scored on a sacrifice fly by Grislis in the fourth. That was all Narragansett needed, as pitchers Wyatt Burdick and Kent combined to allow just one run on four hits. Burdick struck out four and allowed a run over the first three innings. Kent came on in the fourth and also struck out four.

“Pitching was our key tonight,” Todd Previte said after the win. “We didn’t really hit. This is a nice little team that I have here. They can certainly hit better than they did tonight. We had a few errors in the field, which is also unlike us, but luckily, Wyatt and Zayden really held it for us.”

A little defensive luck helped the cause in the top of the sixth inning. With one out and Luke Brock on third after a triple, South Kingstown tried a squeeze bunt. Defenders surrounded the ball but no one grabbed it. Brock took off for home, then turned back and Narragansett got him at third. South Kingstown eventually put the tying run back on third, but Kent finished off the win with a strikeout.

“That’s a good team they have. They’ve got a couple of really good coaches. Those kids are coached really well,” Previte said. “I’m not surprised that it was a 2-1 game. Very easily could have been the other way around.”