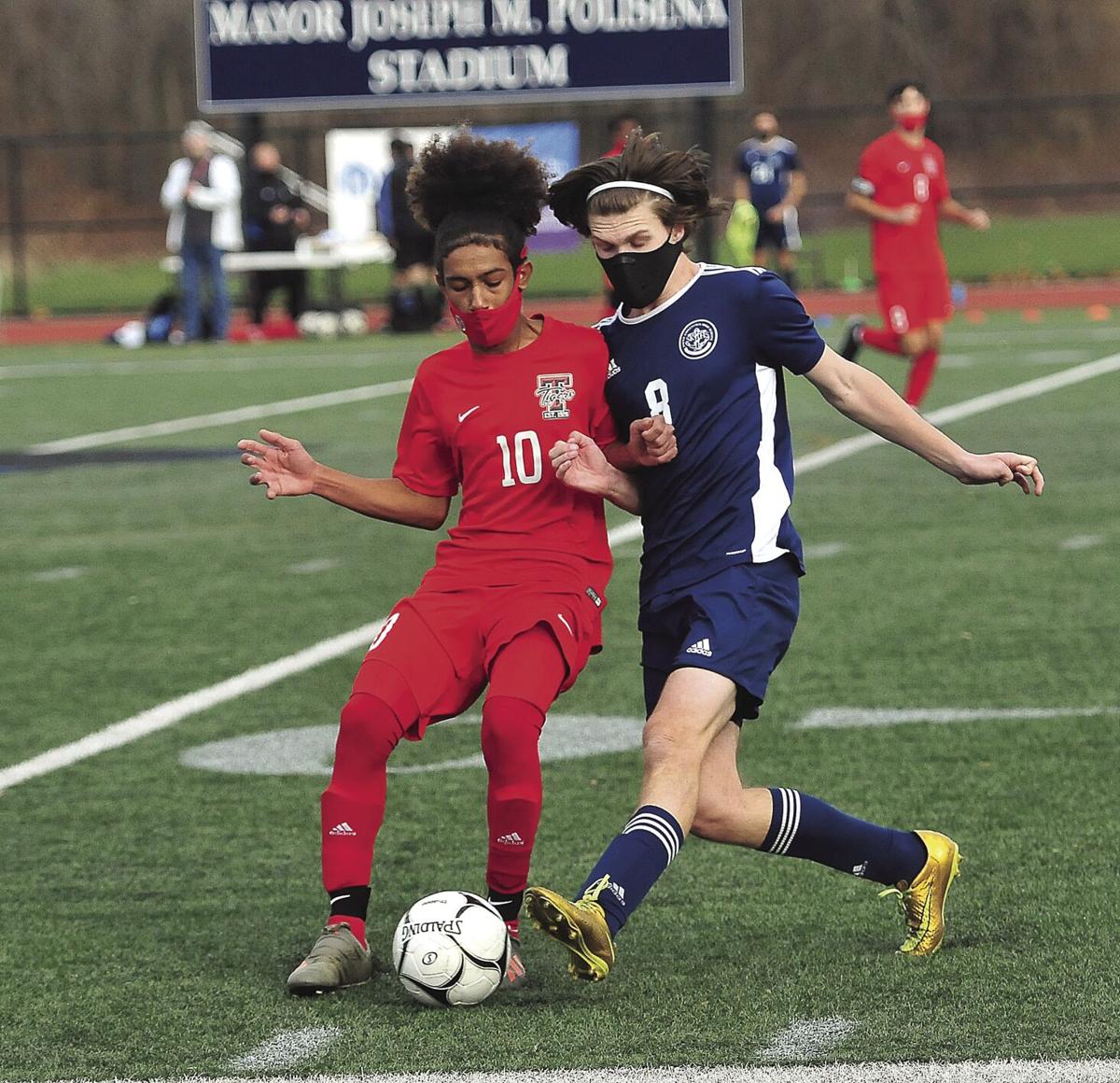 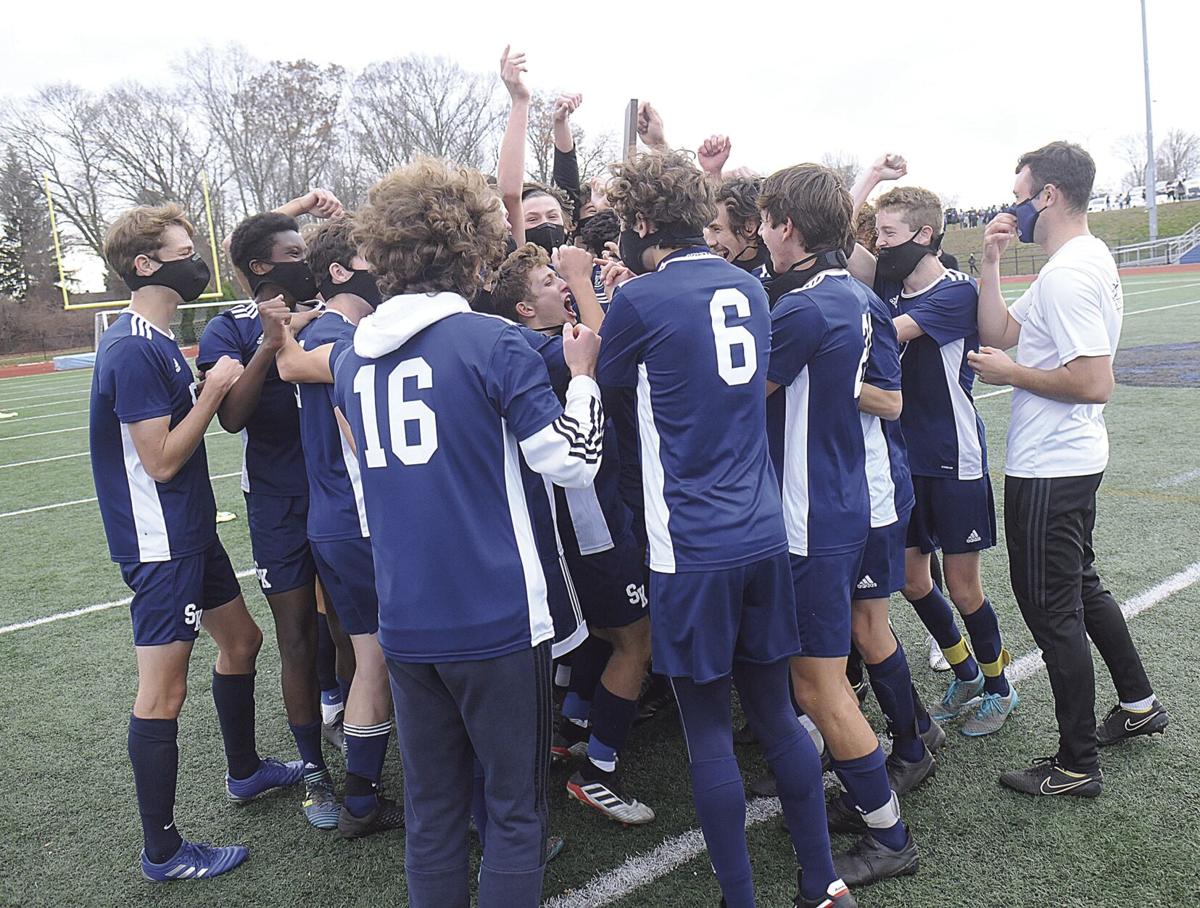 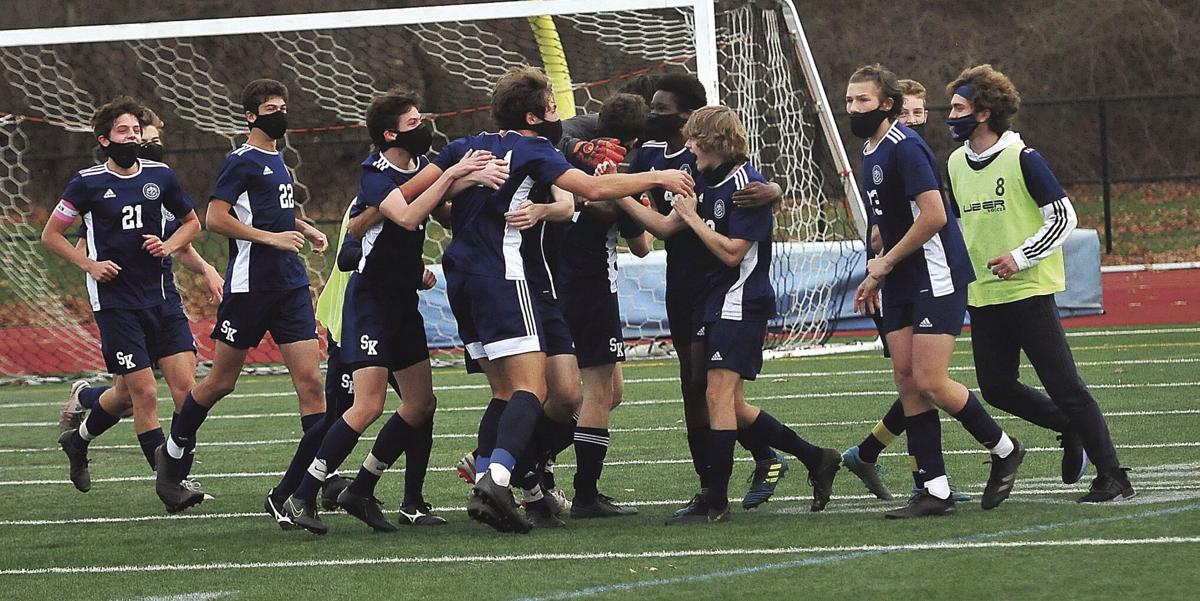 JOHNSTON — Another hard-to-believe championship drought is over.

One year after the girls team broke a 20-year dry spell, the South Kingstown High School boys soccer team followed suit. With a dramatic win in the quarterfinals, a surge past defending champ La Salle in the semifinals and a 3-1 victory over Tolman in Saturday’s title game at Johnston High School, the Rebels won their first state championship since 1992.

“To actually do it, it’s awesome,” said junior Matthew May, who scored two goals in the semifinals and one in the title game. “I don’t care if people say that it’s less of a season. It meant the same to me. It was really challenging. The masks are a big part. The reduced practices. Can’t get into gyms. Less games. It didn’t matter to us. It was hard, but we were the one team that came up on top.”

In the 28 years between championships, the Rebels remained one of the state’s perennial powerhouses. They had only three losing seasons in that time and were more often at the far other end of the spectrum, competing for titles. Five times, they finished as the state runner-up, including in 2017. In both 2018 and 2019, with some of the current players on the field, the Rebels saw strong runs end in the semifinals, with losses to the eventual champions.

The breakthrough win comes in a season that was in doubt for much of the summer due to the coronavirus pandemic, but the Rebels stayed ready.

“Ever since we started training in the summer, training three to four days a week still not knowing if there was going to be a season, when you talk about the team and the kind of mindset and character of these boys, it just goes to show that they were prepared,” head coach Adam Howarth said. “When we got the call that there was going to be a season, we knew we were ready to go. The boys were fit. We had been working on the system that we wanted to play.”

Ups and downs followed. The season began with a flourish, as the Rebels toppled La Salle in 3-2 in their opener. They tied their next game, then dropped a 1-0 decision to North Kingstown. They ended up winning three of their last four games but were stuck with a tie against Bishop Hendricken just two weeks ago that left them frustrated and on the road for the quarterfinal round of the playoffs.

A memorable ride began last Monday in Barrington, where the Rebels won on penalty kicks. Barrington had several golden opportunities to win before the shootout, but the Rebels held strong. Curtis Granville, Cole Naughton, Jack Naughton and Thomas Pellegrino nailed their shots and Colin O’Grady made two saves to clinch the win.

Title runs often feature a close call, and that was the one for South Kingstown. In the semifinals, the Rebels slammed their foot on the gas pedal. La Salle took a 1-0 lead in just the third minute. Less than a minute later, Granville set up Daniel Biller for the game-tying goal. Soon after, May gave South Kingstown a lead when he headed in a volley by Granville, off a Jack Naughton throw-in. When May scored again just after halftime, the Rebels were off and running – and not slowing down as they headed into the finals.

“Once the whistle blew [after the semifinal win over La Salle], I think we knew it didn’t matter who we were playing,” May said after the finals. “With the momentum we had, we knew we were winning this game.”

The quick-strike attack that paved the way against La Salle was at top speed again in the title game, as the Rebels pumped in three goals in the first 20 minutes of action. May delivered the first one off a corner kick by Daniel Banks in the sixth minute. The ball bounced around before May sent it back on net.

Later in the half, another corner yielded another goal. The kick by Jack Naughton was deflected to the near post, where Jason Perry popped it in.

“That’s something we devote a lot of time to,” Howarth said on the success with set pieces. “Just an easy tick of the box with everyone on the same page and understanding what we’re trying to do. It’s something we definitely worked on and always know we’re going to be a threat with. We know we have that in our back pocket. We don’t have to rely on it. Scoring in open play is the goal, but a lot of times during the season, games will come down to that … on a set piece.

“I’m just happy the boys executed and just followed through with everything we worked on during practice. It’s easy to say they’re a good team, but you have to step out on that platform on the field and execute. I’m thankful they did that.”

Less than a minute after Perry’s goal, Granville broke open and poked a chip shot past Tolman goalie Nelton Semedo for the 3-0 lead.

From there, South Kingstown was content to nurse its lead. O’Grady made nine saves for the Rebels, with Tolman only breaking through once, in the 60th minute on a goal by Anderson Cardoso. Tolman threatened a few times, most notably when O’Grady was briefly caught out of position. Rebel defender Ben Conover calmly knocked the ball away from an open net.

“Three goals in the first 20 minutes, that carried us the rest of the game,” May said.

The celebration was a special moment, especially for the team’s 12 seniors. Led by captains Granville, Pellegrino and Sam Biafore, the Rebel veterans did something that had been quite elusive for their predecessors.

“We fought through all of it,” May said. “That’s why we’re the state champs. That’s why I have this medal around my neck.”

The Rebels knew they had the potential to be the best team in the state – and they delivered.