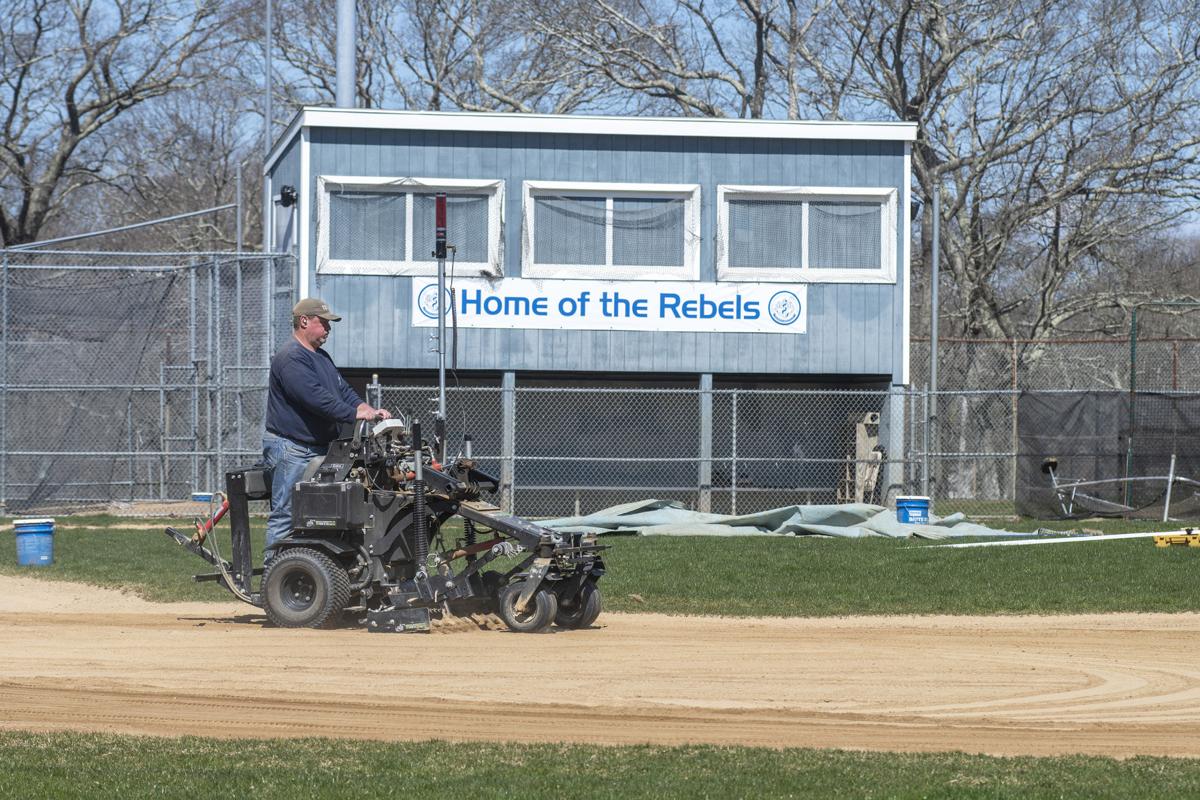 South Kingstown Parks and Recreation employee Ken Boiteau grooms the infield at Old Mountain Field in Wakefield on Tuesday in preparation for a baseball season that may not happen. 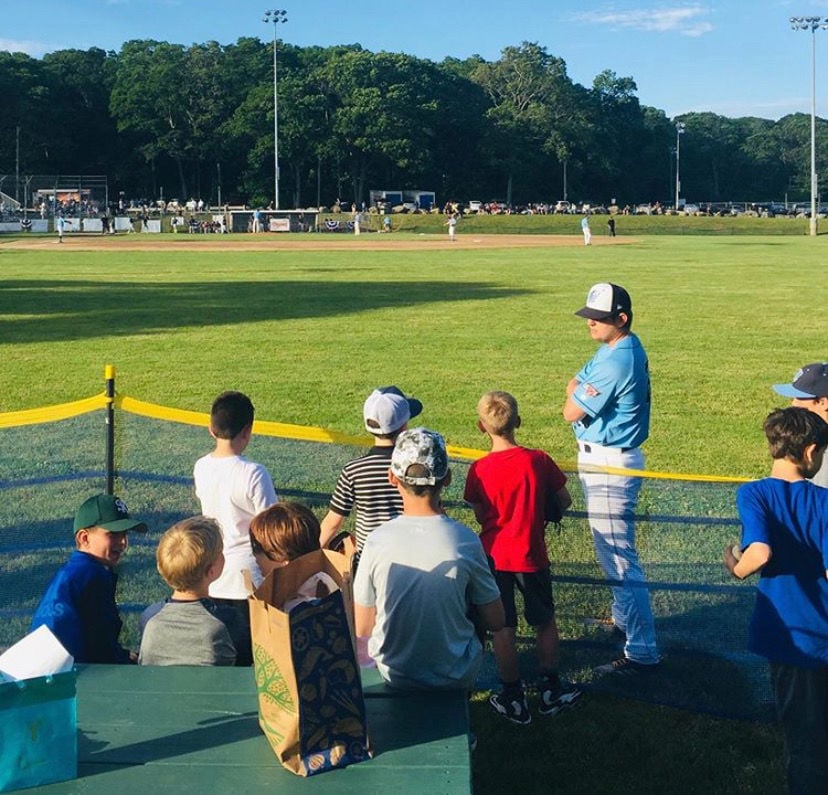 South Kingstown Parks and Recreation employee Ken Boiteau grooms the infield at Old Mountain Field in Wakefield on Tuesday in preparation for a baseball season that may not happen.

The Ocean State Waves are operating as if there will be a summer season, knowing that there may not be and hoping all the while.

“The number one thing for us is making sure our community, our players, our coaches, our host families are safe and healthy. Baseball is secondary,” said president and general manager Eric Hirschbein-Bodnar. “But at the end of the day, if we’re able to have a season, baseball historically has been something that brings people together and I think we’ll see that.”

Summer nights with the crack of the bat echoing over Old Mountain Field are a welcome thought for baseball fans in South County these days. The college baseball season was canceled in March due to the coronavirus pandemic. The Major League Baseball season is in limbo. High school ball is on hold. Little League hasn’t started.

For the Waves, their neighbors the Newport Gulls, and their brethren in the New England Collegiate Baseball League, there is uncertainty. Large summer sporting events have been canceled months in advance, and the Valley League became the first summer collegiate league to announce a cancellation of its season last week. For now, the NECBL and many other leagues are in a holding pattern, planning to play and waiting to see if it will be possible. The season is scheduled to start June 3.

“We are hopeful that we will play baseball this summer, and we continue to plan for our summer season, including accommodating college seniors who are now eligible to play and what our season may look like,” a statement from the league read. “That said, our first priority is the health and well-being of our players, host families and fans. As part of our monitoring we are communicating with MLB, the NCAA and the National Alliance of Collegiate Summer Baseball. We will regularly review decisions and guidance from federal, state and local officials, and the leadership of our host communities to obtain the most current information on the virus, and to understand and implement the most current recommendations and directives.”

Conversations between general managers and league officials have showcased flexibility and creativity, including the possibility of a shortened season if need be.

The willingness to wait and adjust on the fly stems in part from the potential importance of summer ball in the current climate. College players lost most of their season, and the Major League Baseball draft will be later in the summer and may have significantly fewer rounds. For players, summer development will be more crucial than ever and the chance to return to the field will be welcome. For scouts who have missed months of evaluation, summer leagues would also be important.

“We’re holding on because Major League Baseball needs us more than ever,” said Hirschbein-Bodnar, who is also slated to take over as head coach this summer. “We’re going to be really important for evaluating players.”

The league has adjusted its roster size and eligibility rules. Seniors granted an extra year of eligibility by the NCAA due to the cancellation of this season will be able to play in the league. With expanded rosters, there will be room. The Waves roster for 2020 now includes former standouts Garrett Hodges, Casey Dana and Nick Robinson.

“As soon as the college baseball season got canceled and we didn’t know what the new normal would be, immediately a few of the general managers in the league were texting and calling each other, saying, ‘We need to help our former guys. Our seniors that lost their year. Whatever it takes, we’re going to find a way to get them on our rosters this year,’” Hirschbein-Bodnar said. “And within a day, it was approved by our league to open up our rosters by five more spots. And we all gave those to our seniors.”

It was a priority for the league.

“As we assess this changing situation, foremost we recognize that college athletes lost their spring season, and because of this, summer baseball is more important to our players and coaches than ever before,” the league statement said. “That’s why – even in the context of today – we will continue to plan for summer ball and make every extra effort to get our college players on the field.”

Returning veterans are part of why it could be a great summer in leagues across the country, if seasons can be played. There will also be a major boost to pitching staffs, which have been hurt by college-enforced innings limits, but will have no such trouble this year, and a possible trickle-down effect for players who might have hooked on with the Cape Cod League but can’t find room on a roster. The enhanced value of summer ball will also be front and center.

“It’s going to be the most important summer ball season programs have had,” said University of Rhode Island head coach Raphael Cerrato.

Added Hirschbein-Bodnar, “If we do have a summer, I think across the board in the league, we’re going to have the best attendance we’ve had, bringing communities together again, and the competition in the league is going to be outstanding. Probably the best we’ve ever had.”

Hirschbein-Bodnar hopes the Waves’ emphasis on community shines through more than ever this summer. The franchise plans to offer free admission to doctors, nurses, hospital staff, EMTs, firefighters and police.

“We really want to see this summer be about the community,” Hirschbein-Bodnar said.

Amid the coronavirus economic crisis, the Waves plan to honor sponsorship agreements for companies that can no longer pay and will keep their signs up on the outfield fence. The Waves are a non-profit, as are all members of the NECBL, but they incur significant expenses for travel and baseball operations. Local business sponsorships are vital for covering those costs, but Hirschbein-Bodnar said the team will make it work.

“We’ll find a way,” he said. “You say that all the time in the game of baseball. Adversity happens and you find a way to get the job done. We’re a small business too. We’re all in this together.”

He credited staffers Tim Joyce, Joe Mello, Marina Moceri and Bobby Stachura for working behind the scenes to help the cause. The advisory board, which includes the Perry family, the Joyce family, the Riley family, the Wokoske family, the Bowers family, the Finlayson family, the Snow family and the Previte family, has also been instrumental. Hirschbein-Bodnar’s parents, who are heavily involved, provide support from afar as they stay home in New York. Groundskeeper Ken Boiteau and his crew were on the field early this week, getting it ready for whatever may come.

“The work by everybody in the organization is what’s going to get us through these hard times, eventually to an awesome season, whether it’s in 2020 or 2021,” Hirschbein-Bodnar said. “The adversity and the challenges are only going to make us stronger as an organization. They’re going to allow us to continue to grow within the community and take us to hopefully winning an NECBL championship. More importantly, giving the players every opportunity to develop and giving our community a chance to enjoy this brand of baseball and their time together.”

It’s all in an effort to make summer happen, if at all possible.

“We’re all praying and hoping the curve flattens out and we can get back to getting together as a community,” Hirschbein-Bodnar said. “We’re hoping the Waves are a way to bring the community out, enjoy each other’s company again and really be that bonding moment.”