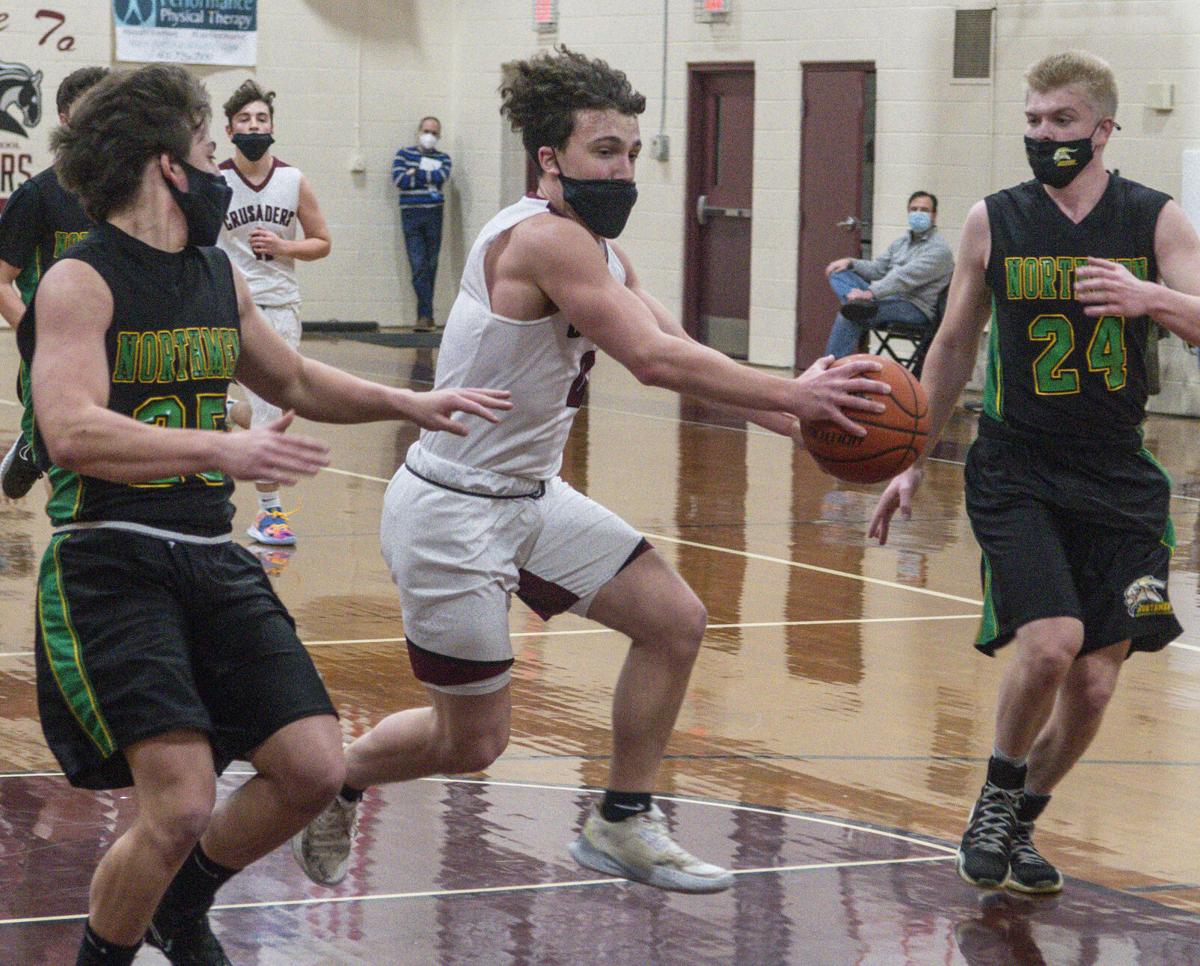 Prout's #0 (there are two on the roster) drives to the basket during Friday's game against North Smithfield at The Prout School. 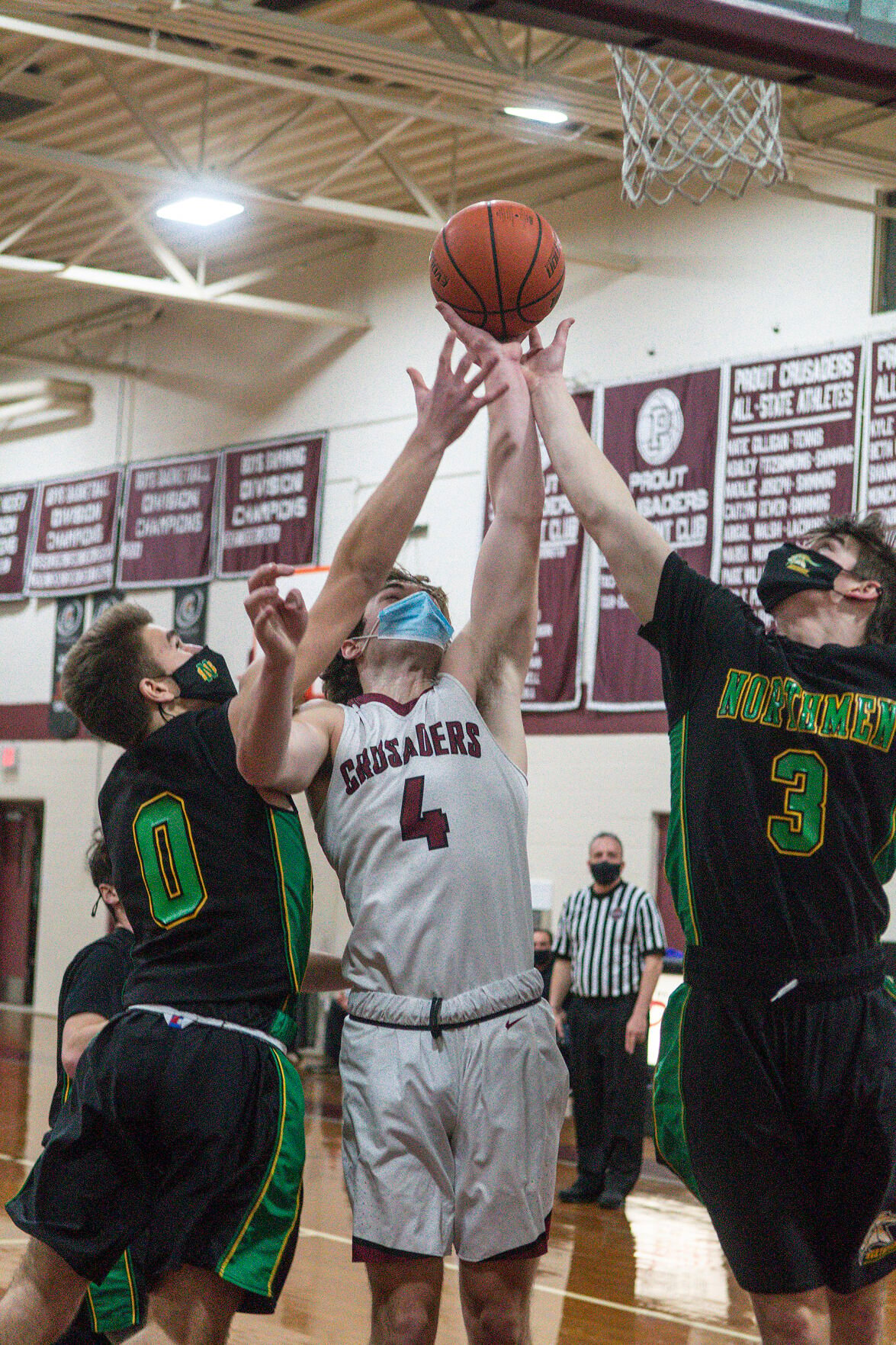 Prout's Maxwell Fiore goes up for a rebound against North Smithfield's Nicholas Decelles, left, and Adam Dubois during Friday's game at The Prout School.

Prout's #0 (there are two on the roster) drives to the basket during Friday's game against North Smithfield at The Prout School.

Prout's Maxwell Fiore goes up for a rebound against North Smithfield's Nicholas Decelles, left, and Adam Dubois during Friday's game at The Prout School.

SOUTH KINGSTOWN — The playoff picture for Division III boys basketball was a little muddy heading into Friday night, but Prout coach Dean Felicetti felt certain his team needed a victory in its season finale to secure a berth.

And his team pushed hard for it.

The Crusaders rallied from an eight-point deficit in the first half to take a slim lead, then outscored North Smithfield by 11 in the fourth quarter en route to a 47-35 victory.

“We knew we needed this one,” head coach Dean Felicetti. “It was a little shaky for a while, but we really closed it out well.”

The win did indeed lock up a playoff berth for the Crusaders, who finished 5-4, good for a second-place tie in D-III-South. It’s the program’s first winning season since the 2013-14 campaign. The postseason bid is Prout’s first since the 2017-18 season, when it was in the D-II playoffs. The team won just three league games combined over the next two seasons and moved to D-III this year.

“It just feels great,” said senior Maxwell Fiore. “The team made it when we were freshmen. The next two years, we had really bad seasons. The fact that we were able to make it this year just feels really good.”

The Crusaders entered Friday’s game losers of three straight. A 4-1 start had given way to uphill battles against some of the top teams in the league.

“We started off really strong,” Fiore said. “Then we played some really good teams. We had a little losing streak. But we came out tonight just ready to go.”

Breaking out on Friday took a little time. After hitting three 3-pointers in the opening minutes, the Crusaders went 8:12 without a point and fell behind 17-9. A putback by John Estes with 5:56 left in the second quarter ended the dry spell, and allowed Prout to take the first steps on the comeback trail. It was a 21-18 game at halftime.

Prout opened the second half with seven straight points as John Mainella hit a jumper and a putback, and Estes drilled a 3-pointer. North Smithfield briefly regained the lead before a layup by Mainella and a 3-pointer by Chris Pimentel. A 3-pointer in the final seconds of the third quarter got the Northmen to within a point.

Another strong start to a quarter allowed the Crusaders to take control, and this time, they never let go. Fiore scored on a putback and Estes hit a 3-pointer to make it 35-29. Fiore scored three in a row for Prout to make it 38-33, before Estes and Fiore delivered a 4-0 spurt with buckets inside.

Prout turned up its defense to stay in front. North Smithfield didn’t make a field goal in the final 4:42 and, in one key stretch, didn’t even get a shot off. In the final two minutes, Prout nabbed four steals and a block.

“We tried to stick with what was working – make good plays on defense and finish out the game,” Fiore said.

Fiore had a huge impact in the fourth quarter, scoring all of his nine points in the final eight minutes. He grabbed two offensive rebounds and added a block at the defensive end.

“He was a monster,” Felicetti said.

Estes led the Crusaders with 16 points. Mainella and Mike Bogosian scored eight points each and Pimentel finished with six.

“I’m happy for these guys,” Felicetti said. “Tough couple of years, but they stuck with it and they worked hard. They deserve it.”

Prout will face Exeter-West Greenwich in the preliminary round on Saturday at 1 p.m.