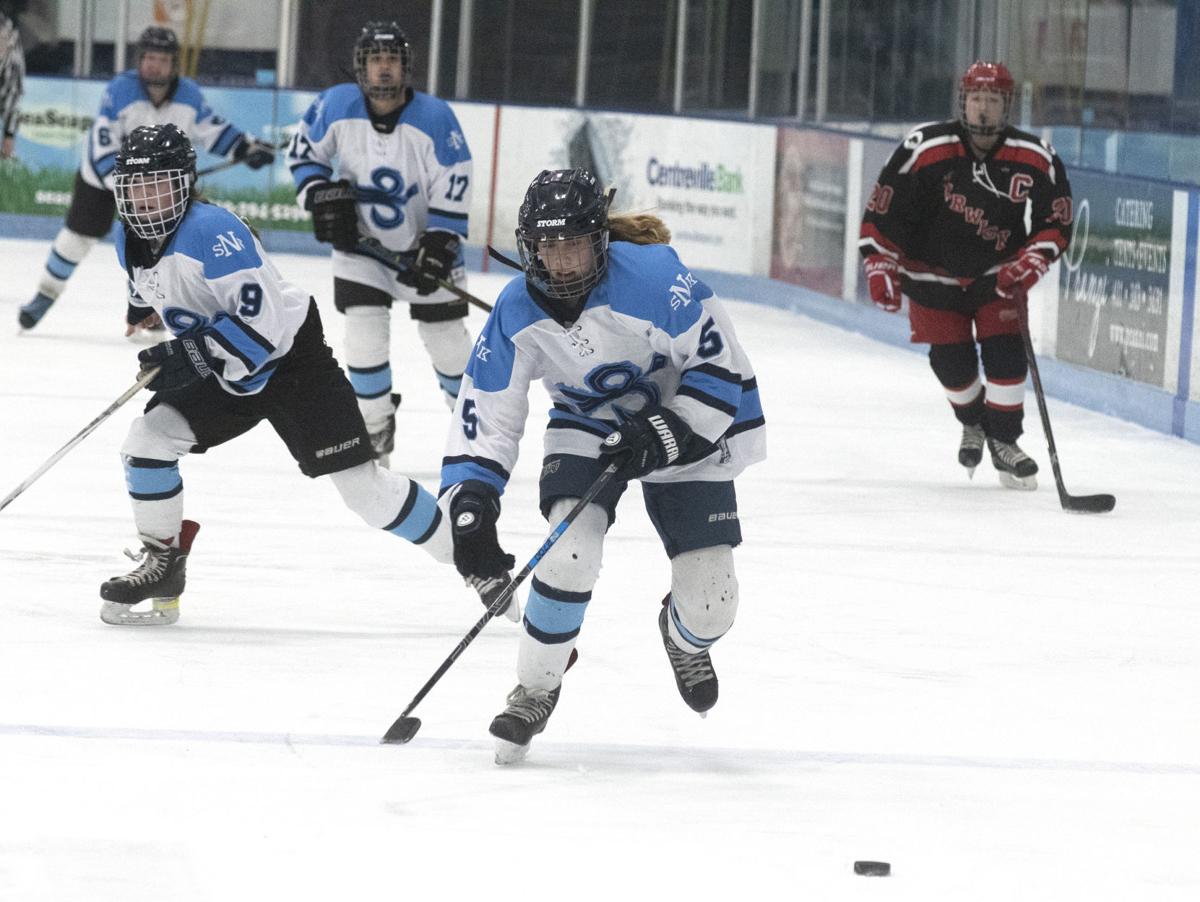 South County's #5 chases the puck during Saturday's game against Warwick at Boss Arena. 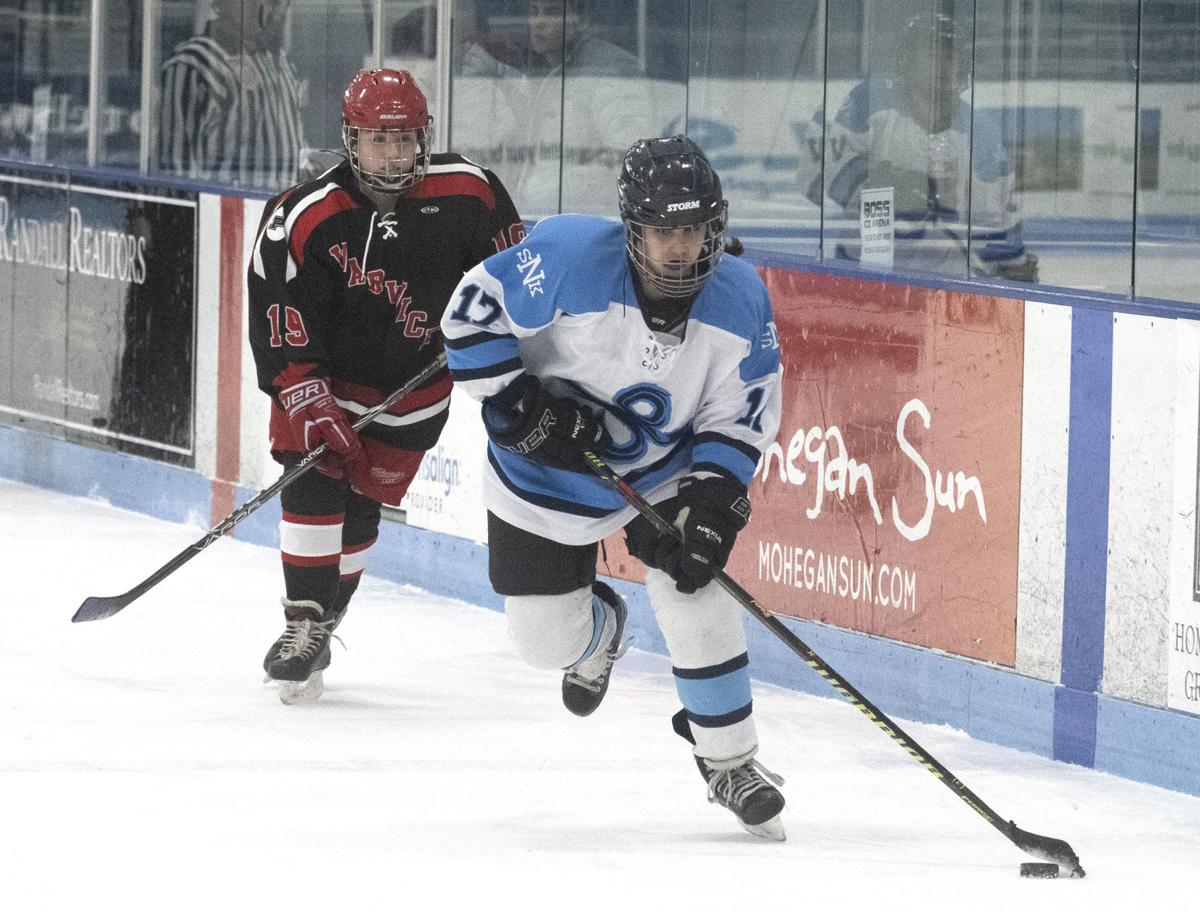 South County's #17 gets past Warwick's #19 during Saturday's game at Boss Arena.

South County's #5 chases the puck during Saturday's game against Warwick at Boss Arena.

South County's #17 gets past Warwick's #19 during Saturday's game at Boss Arena.

SOUTH KINGSTOWN — When the season opened with two straight losses back in December, it looked like the South County Storm co-op girls hockey team might be in for more of the same after two down years.

As it turned out, they had just skated against the top teams in the state, and two months later, the Storm has slotted in just behind them.

With its third straight win on Saturday at Boss Arena, a 6-3 triumph over Warwick, South County improved to 7-4-1, good for third place in the league, just a point out of second. It’s a welcome change, with the team now guaranteed its first winning record since the 2016-17 season, which concluded with the state championship. South County went 7-10 and 3-10-1 in subsequent years.

“The past two seasons were pretty brutal in the rebuilding aspect,” head coach Sydney Collins said. “It was great to have a really good freshman class come in, and players from past seasons are stepping in to those bigger roles. They’ve really improved their game. It’s been good.”

South County went on a five-game unbeaten streak after the early losses. The East Bay co-op got the Storm again on Jan. 20 and La Salle did the same on Jan. 26. Another bounce back followed, with the Storm beating Smithfield/Coventry/Moses Brown and Cranston/East Greenwich.

The coaching staff still wanted to see a little more and got it as the win streak continued Saturday. The Storm blasted its way to a 5-0 lead and held on down the stretch for the win over Warwick.

“We’ve really been working on trying to put all the pieces of the puzzle together in practice,” Collins said. “The last few games, we weren’t playing to our potential. Tonight, they really stepped up and played to the best of their ability.”

The Storm came out firing, with eight shots on goal in the first four minutes of the opening period. The ninth shot on goal found the back of the net, as Erin McNamara made it 1-0 with 10:24 left in the period. Jade Shabo buried a shot from the left circle four minutes later, and Melanie Morrison made it 3-0 with 4:15 remaining.

Warwick outscored South County 3-1 in the final period, but the lead held up. Amelie Gregoire added an insurance goal for the Storm. Goalie Veronica Sabatino made 14 saves. The Storm peppered Warwick for 43 shots on goal.

Six different players accounted for the scoring, five of whom are freshmen. The newcomers make up the bulk of the roster. As that class has settled in, so too has the Storm as a whole.

“They’ve really had to step up,” Collins said. “When they play with their travel teams, it’s all 14-year-old girls against each other. Now they’re playing against 16, 17, 18-year-olds. Mentally, getting them to buy into the fact that they can play at this level has been a big challenge.”

The Storm has met the challenge more often than not and has put itself in position for a playoff run. First, they draw two last hurdles in the regular season, with games against Mount St. Charles/Cumberland/Lincoln and Burrillville/Ponaganset/Bay View. Those are the teams closest to the Storm in the standings.

“I’m hoping we can finish the season with two strong wins and keep the train going into playoffs,” Collins said. “Hopefully, we draw a team that we can compete better against than some others. It depends on how our goal-scoring is that day. La Salle and Barrington are at the top, but the next four teams, anybody can win.”

And they beat Mt St. Charles last night. Very impressive year from a team with 17 freshman!