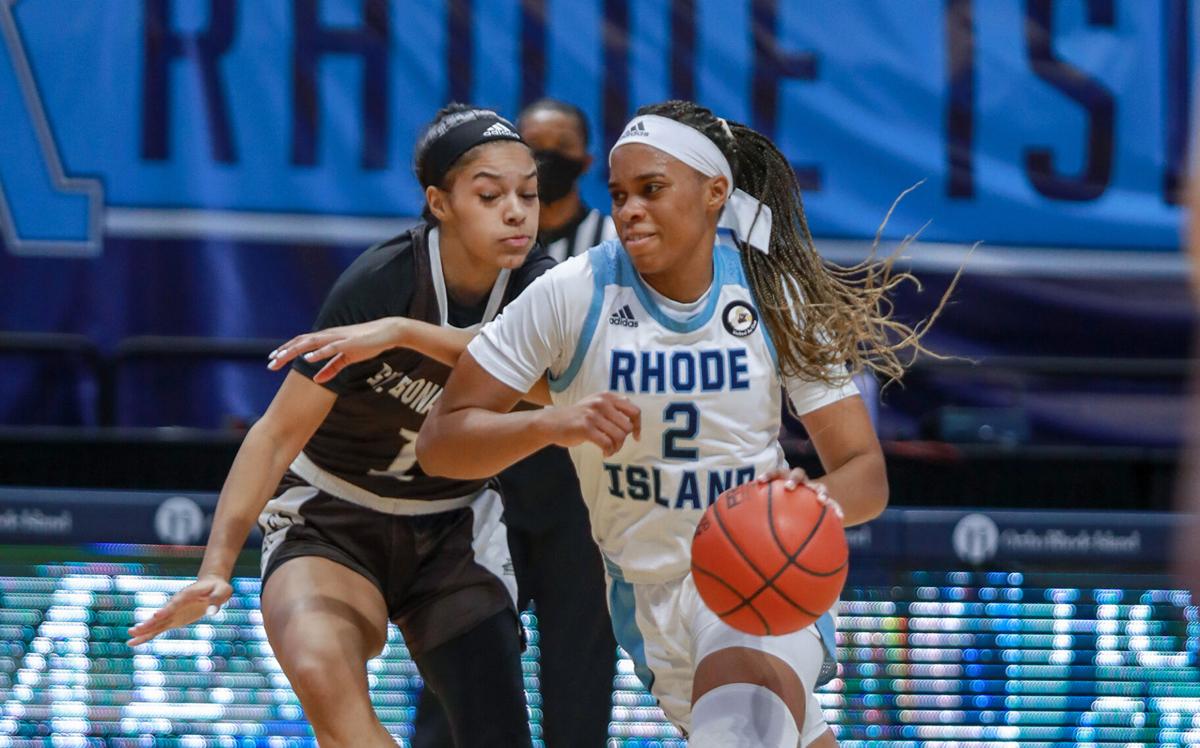 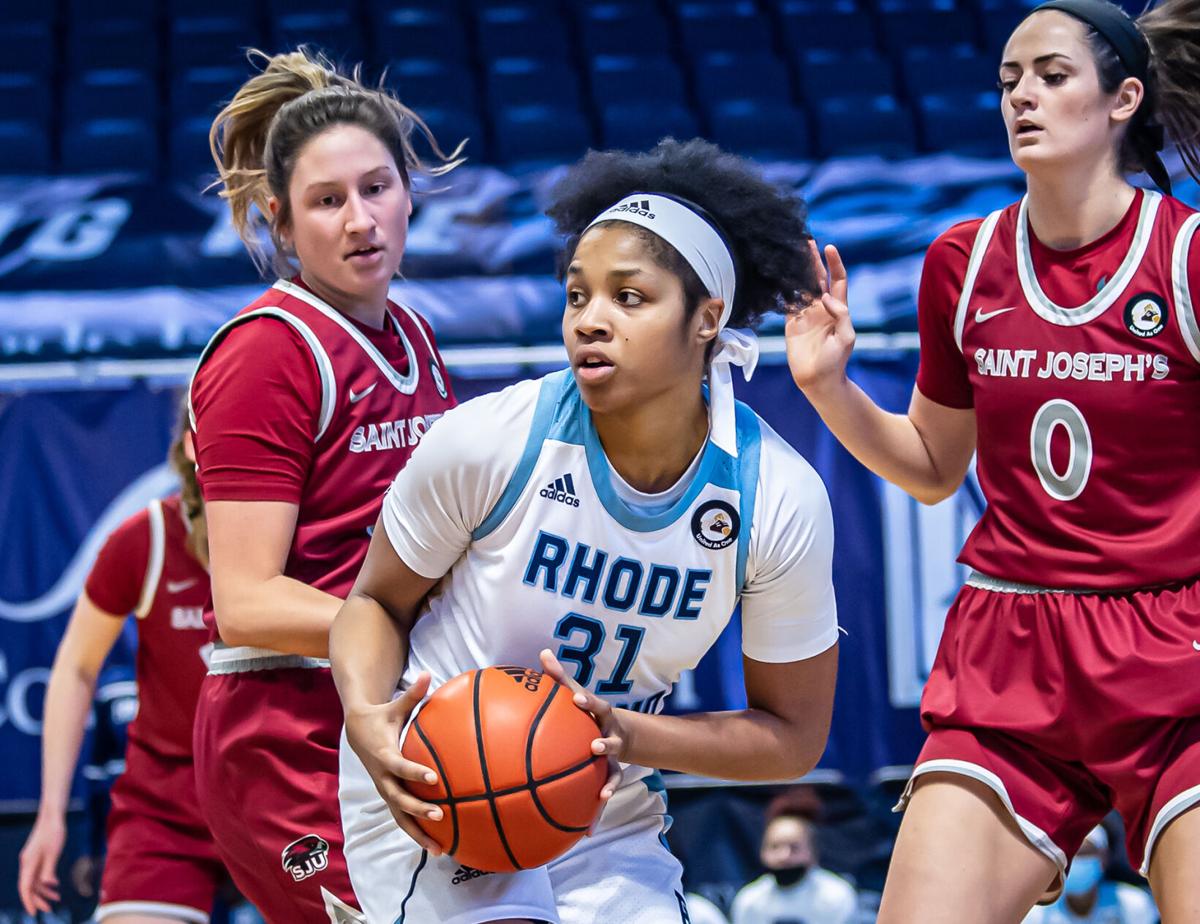 Every so often, in the heat of the moment, on courts far from home, Emmanuelle Tahane will find herself slipping into her native language.

On this University of Rhode Island women’s basketball team, there’s a good chance she’ll be understood.

Six of the 12 players on the URI roster are from France, including three of the team’s top four scorers. As the Rams have surged to a breakout season in Atlantic 10 play, the French connection has been a big reason for success.

It’s exactly what head coach Tammi Reiss and associate head coach Adeniyi Amadou – himself a native of France – envisioned when they stepped in to lead the URI program in 2019.

“In any competitive environment, you have to try to find a competitive advantage,” Amadou said. “Coming to Rhode Island, we had very ambitious expectations, but we also knew that the program was at a spot where it was not necessarily going to be as attractive as other top schools in our conference. By going internationally, it allowed us to get high level players that maybe don’t care about the same things that American kids care about. They don’t care about the reputation. Maybe they value more the relationships and just the opportunity to play basketball and get an education.”

Reiss recalled her own playing days for a similar assessment. Courted by schools around the country, the former University of Virginia star made success a priority.

“I’m going to be honest,” Reiss said. “I wouldn’t even open mail when I got letters from teams that didn’t win. Kids nowadays, it’s 10 times worse. They don’t want to go to a loser.”

As excited as she was about Rhode Island’s potential when she was hired from Syracuse, Reiss knew the situation. When she took the reins, the Rams had delivered only one winning season in 15 years. Recent years included a brutal 3-27 campaign in 2017-18.

The rebuild had to start with a talent influx, and the Rams needed an alternate route to find it. Bringing Amadou with her from Syracuse opened the doors.

“I wasn’t going to take this job if Adeniyi didn’t want to come with me,” Reiss said. “That’s how close we are and how much I trust him. It’s why I made him an associate head coach. He’s that important to this program. He’s an unbelievable international recruiter.”

Amadou once took the same path that his recruits are now embarking on. A native of Paris, he came to the United States to play college basketball at the United States Military Academy at West Point, then transferred to Indiana University of Pennsylvania. He earned a master’s degree in journalism at Syracuse’s S.I. Newhouse School of Public Communications, but decided to remain in the basketball world.

“I quickly realized the skills I developed as a journalist – finding people’s stories, learning how to listen, learning how to ask questions, building relationships – really helped me in terms of becoming a coach,” Amadou said.

Relationships became the hallmark of Amadou’s recruiting approach. Trust and support go an especially long way for international players who are traveling halfway around the world.

“The approach is very much the same when we have them here, once they’re under our care. Everything rises and falls on relationships,” Amadou said. “The kids we’re recruiting now, we’ve been communicating with them since we’ve been here. And the kids who are already here, we’re still recruiting them, in a sense. We spend more time talking to the kids that are here than to the kids we’re trying to get. It’s really about relationships. It has to be honest, it has to be transparent. It has to be daily.”

Amadou’s connections in France’s basketball infrastructure helped URI bring in the first wave of talent. Tahane and Marie-Paule Foppossi were already playing college basketball, Tahane at Missouri and Foppossi at Syracruse with Reiss and Amadou. Both were looking to transfer. Amadou had already known them for several years. He and Reiss sold them on their vision for URI.

“Where they were at in their careers, they just weren’t happy,” Reiss said. “They weren’t getting what they thought they were getting when they went to their original schools – for whatever reason, it’s nobody’s fault. It just wasn’t the right fit. I’m so happy to see them on the court now.”

Tahane’s older sister, Goriane, played professionally in France, and Tahane – 10 years younger – used to get shots up at halftime of her sister’s games. Basketball took hold, and she climbed through the country’s development system, playing on national teams at several levels.

The chance to pair academics with basketball – something that isn’t feasible in the European pro ranks – drew her to college hoops.

“I really wanted to keep advancing my academic career,” Tahane said. “After high school, you really can’t keep doing basketball and your studies. When you go pro, you don’t have time or the accommodation to keep doing your studies. Here I can do both.”

Foppossi tried tennis first but her older brother played basketball and she followed him to the court. Tahane and Foppossi attended high school together at Lycee Marcelin Berthelot and crossed paths on national teams, as well. Foppossi made the same decision to come to the United States, joining Reiss and Amadou at Syracuse.

Tahane played in the NCAA Tournament for Missouri in 2018 and 2019 but averaged only 10 minutes per game and was looking for something more.

“I really liked the coaching staff,” Tahane said of URI. “I knew coach Amadou. At Missouri, I didn’t have playing time and I was looking for more individual development. They didn’t understand my perspective as a European. I want to go back overseas and play pro. I need help with making contacts and developing as a player.”

Foppossi took a redshirt in her first year at Syracuse, then saw only limited action the next year, playing in 17 games. She sought to transfer around the same time Reiss and Amadou departed for URI.

“I’ve known Adeniyi for four or five years now and coach Tammi was a really good coach at Syracuse, always there for my teammates and I,” Foppossi said. “I had a really good relationship with them and I wanted to keep working with them.”

The duo sat out last season, working in practice and watching from the bench as the Rams laid a foundation with a solid season. They took center stage this season, alongside a late pickup who’s also from France. Washington State graduate transfer Johanna Muzet joined the Rams over the summer.

Injuries, limited practice time and a brief non-conference schedule conspired for a tough start, as URI lost its first four games. But things have clicked in the new year, with the Rams going 8-2 since the 0-4 start.

“We weren’t seeing it from a results standpoint, but we knew,” Reiss said. “So the whole thing was keeping this group positive, saying ‘Listen, we’ve had to overcome a lot and we’re right there. Don’t worry about wins and losses. It’s going to click. People are going to see how great you really are.’ It’s a credit to them. They stayed the course, stayed positive and started to build that chemistry. And now you can see.”

Tahane is averaging a double-double at 14.6 points and 10.4 rebounds. Foppossi scores 11.3 points per game and Muzet is at 9.2 points and 8.3 rebounds per game. URI also has Gulf Coast State transfer Lya Farcy, freshman Maye Toure and sophomore Haby Niang in the fold from France.

The numbers speak for themselves, but there’s also something else behind them. With European basketball becoming Americanized, there aren’t many stylistic differences for players coming over. But Reiss has noticed mindset differences and she welcomes them.

“What I love most about them is their lack of entitlement, their graciousness for everything you give them,” Reiss said. “It’s a breath of fresh air at times. Nothing is expected. Their work ethic is impeccable. The intangible qualities that I used to see growing up back in the 70s and 80s when I played, I see in them.”

The work ethic is setting the program up for continued success. Only two players are slated to graduate from this year’s team.

“I’m excited,” Foppossi said. “When you see how much we can accomplish right now, given the history of Rhode Island, it’s really exciting to see we can do something here and make history. I’m pretty excited for what’s coming in a couple of weeks and next year.”

And hearing a little French on the court makes it all the better.