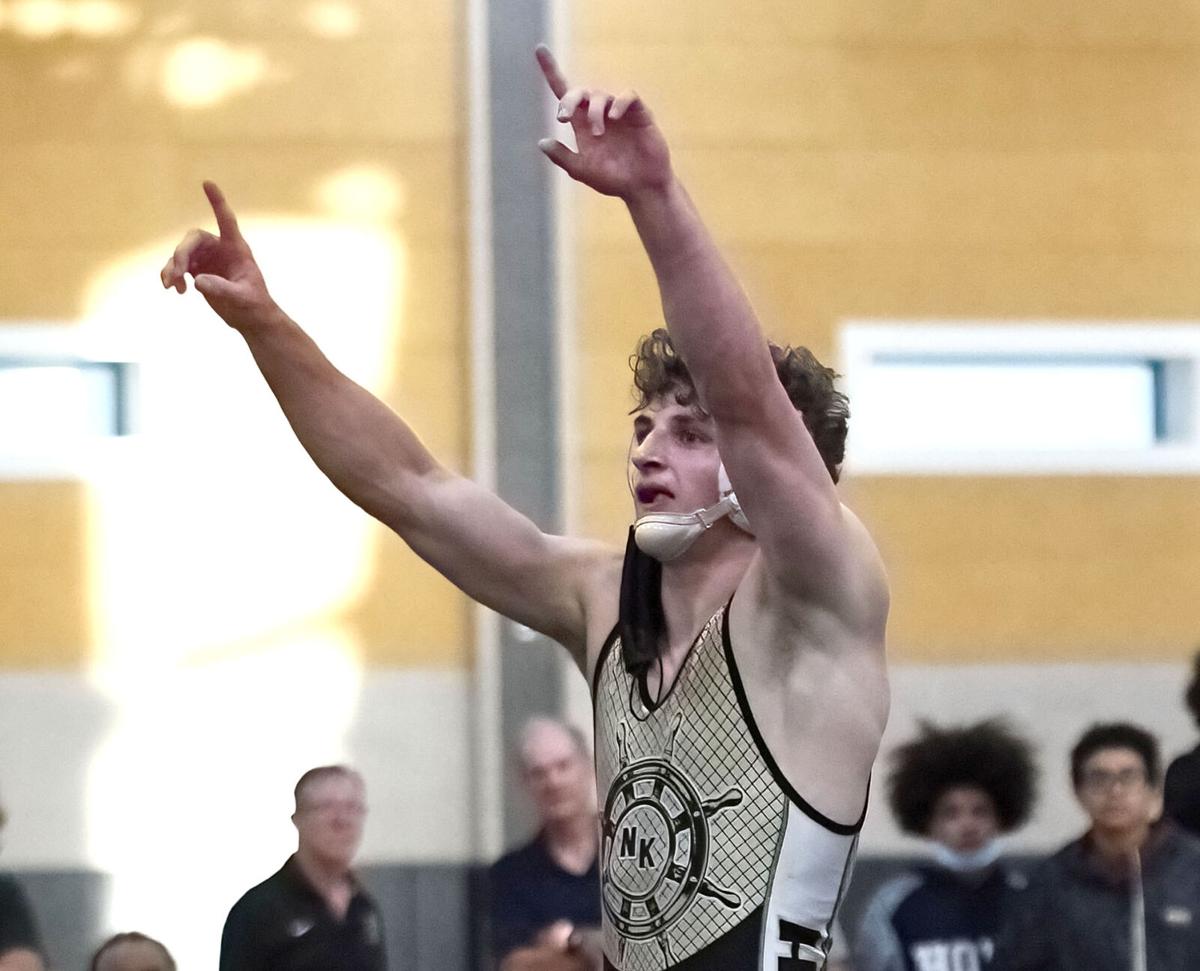 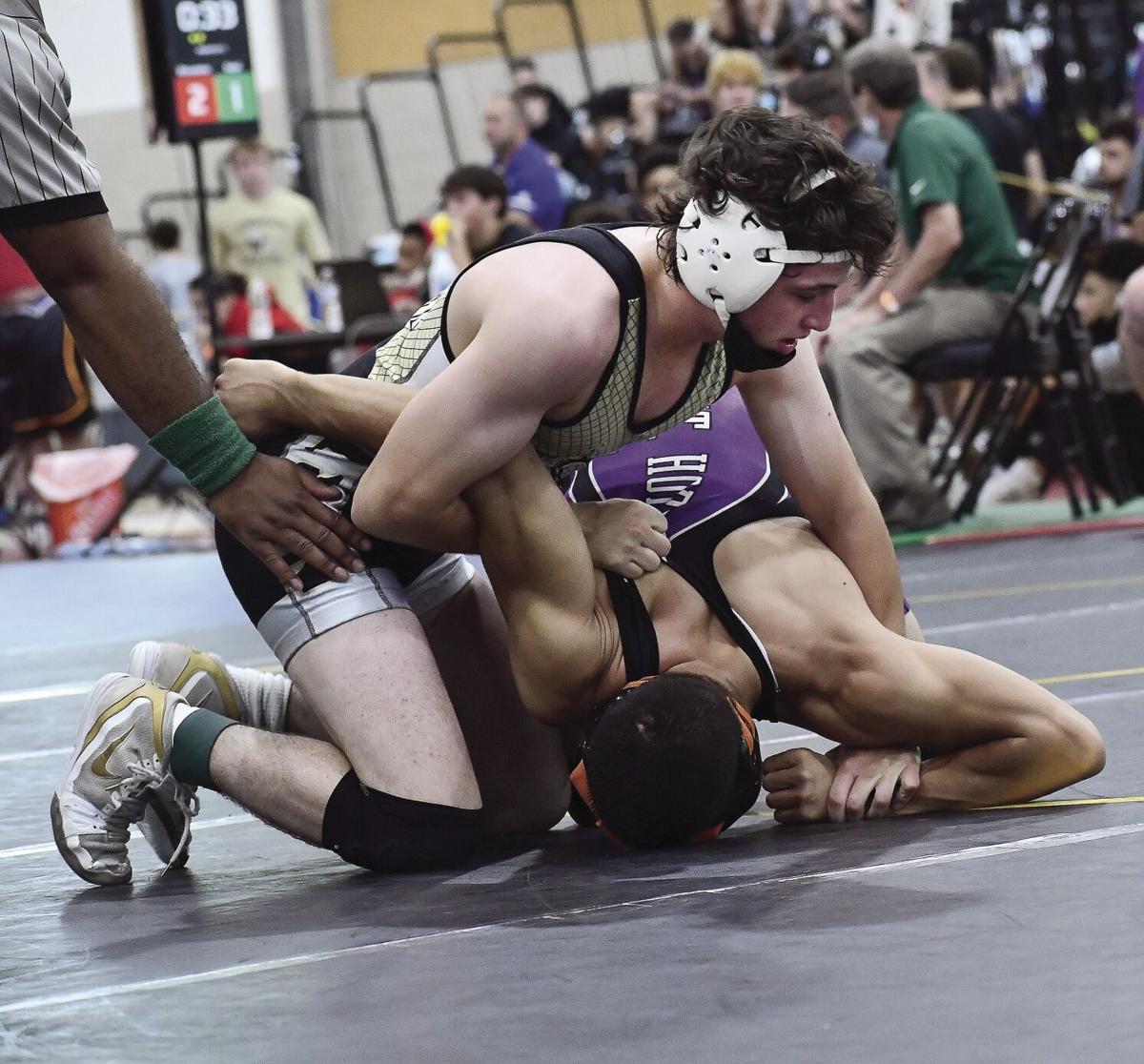 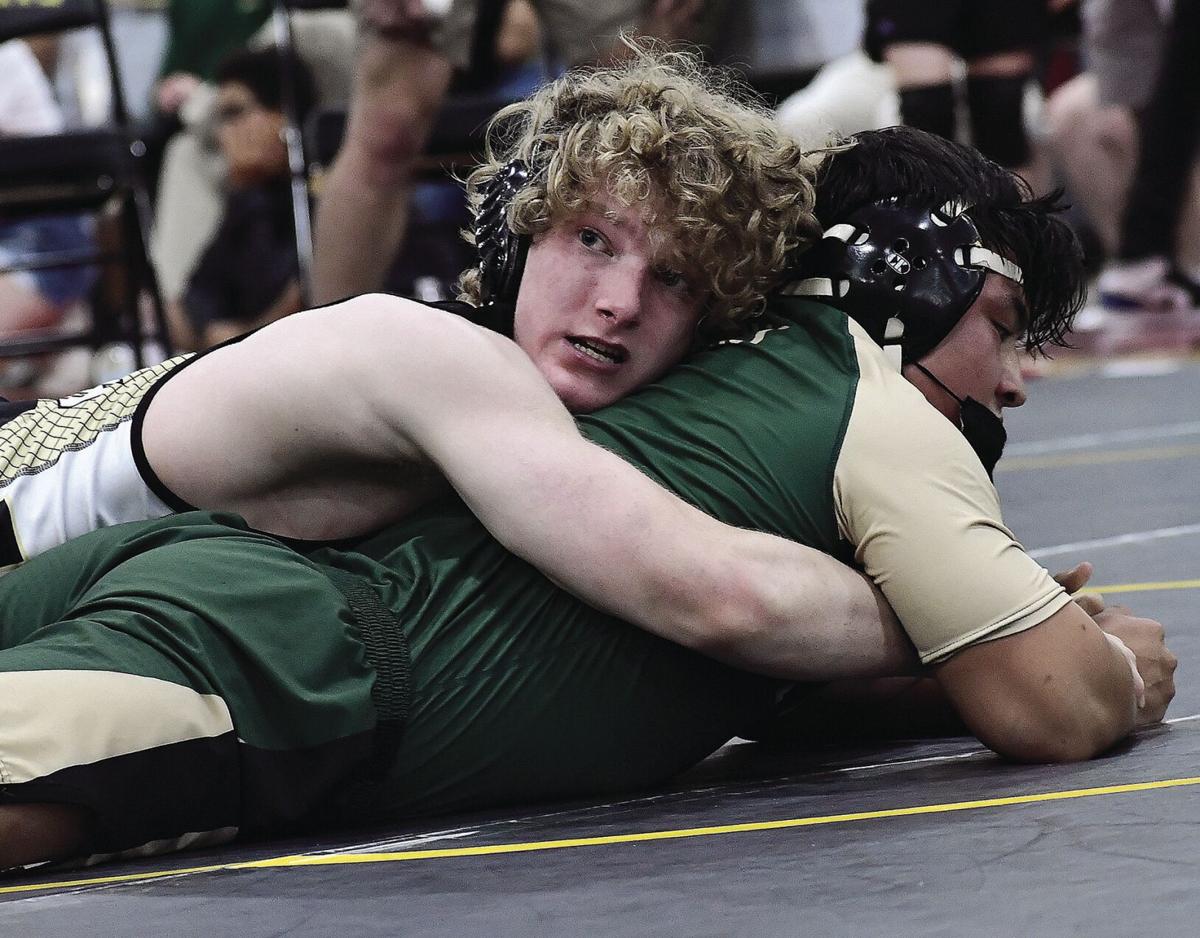 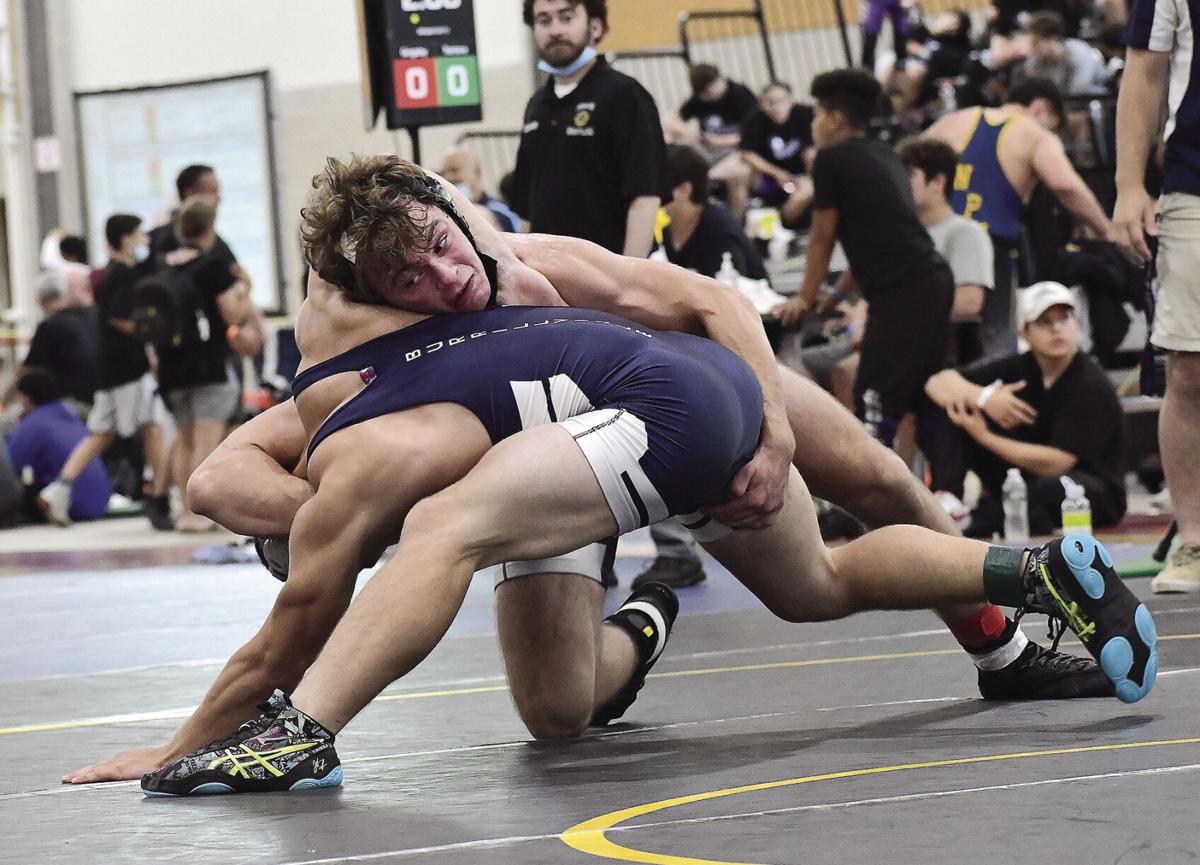 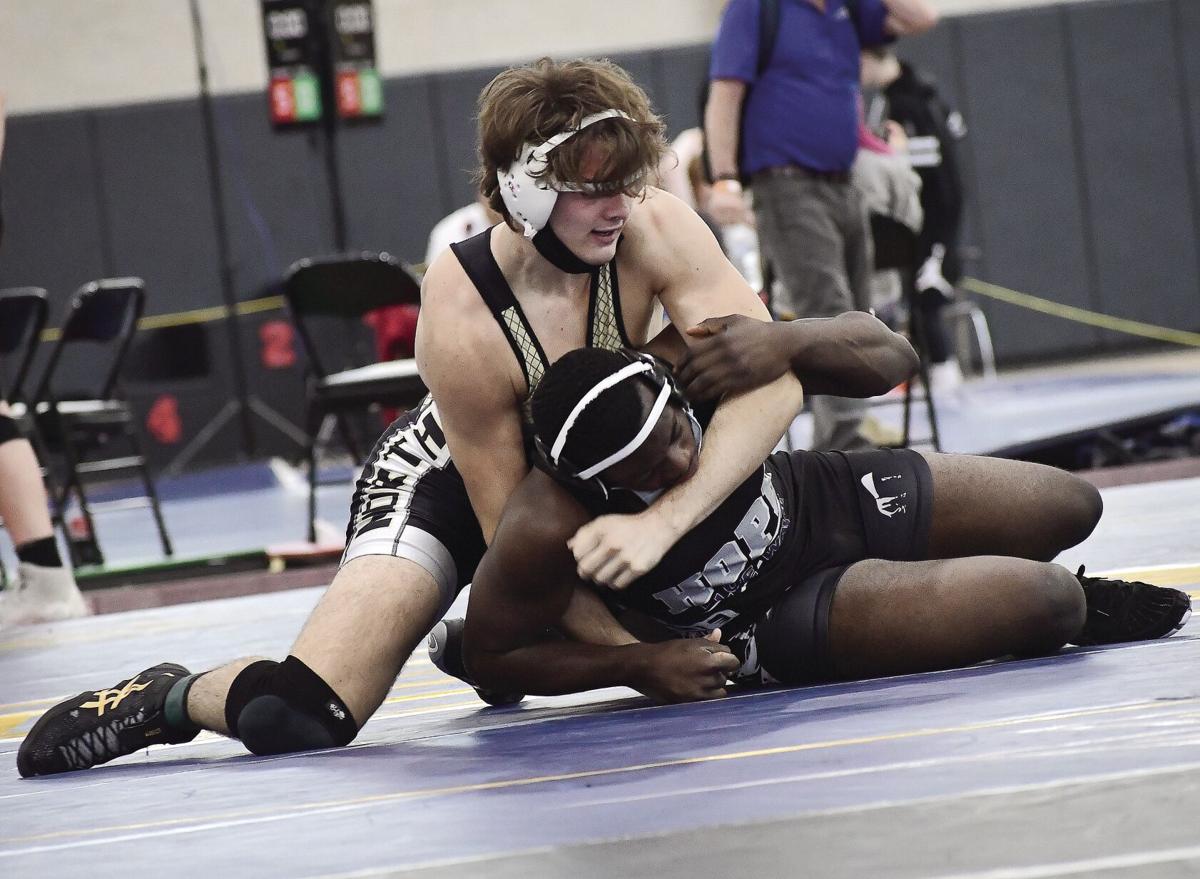 PROVIDENCE — This time last year, Aidan Zarrella was rolling out an eight-foot wrestling mat in his parents’ bedroom, trying to do whatever he could to keep wrestling while the world was shut down.

He had no idea when he would be back on a real mat, but he planned to be ready.

“When quarantine first started, I was working out in my parents’ bedroom,” Zarrella said. “I got a little eight by eight mat. One of the kids from my club would come over every once in a while and just work there. Just trying to get whatever I could in, even with the uncertainty, just trying to stick with it.”

The payoff finally arrived on Saturday. Zarrella became North Kingstown’s first state wrestling champion since 2013, breaking through after a runner-up finish in 2020.

“Finalist last year, just a tremendous athlete,” North Kingstown assistant coach Josh Clare said. “He’s on the mat all the time. He’s putting the work in year round. It was great to see him come out on top.”

Zarrella’s gold medal highlighted a state tournament performance that ranks as the best in North Kingstown wrestling history by many measures. The Skippers won a school record eight medals and totaled a record 150.5 points. They finished fourth overall, their best showing since taking second in 2008.

“I don’t know the whole history but this has got to be one of our best teams,” Zarrella said. “Three guys in the finals. A state champ. And a lot of the guys battling back – Connor Swaim coming in and getting third, Noah Daylor coming back and taking fifth, a bunch of guys getting points to make this the best team we’ve had.”

Zarrella was a fifth-place finisher as a freshman in 2019. Last year, he lost in the finals at 145, but would return this season as a potential favorite.

If there was a season, of course. Wrestling is typically a winter sport but was pushed back due to the pandemic. It didn’t get the green light until April.

“It’s the same thing everybody is going to say – having the uncertainty, continuing to work hard not knowing if we would even have a season, it makes it a little extra sweet to win it,” Zarrella said.

Entering as the top seed at 145, Zarrella won his first match by pin over Miguel Jimenez of Juanita Sanchez. He cruised into the finals with another pin of Hope’s Luis Lopez in the semis.

Matched up against seventh-seeded Brock Pacheco of Mt. Hope in the finals, Zarrella scored a first-period takedown for a 2-0 lead. He tallied an escape point in the second period to go up 3-0. Pacheco got a point back with an escape in the third but was whistled for stalling soon after, putting Zarrell up 4-1. He finished things off with a takedown in the final minute of the match to clinch a 6-1 win.

“I wasn’t even nervous going into my semifinal and final matches,” Zarrella said. “I knew all the work was already put in. I knew what I came here to do. I had to just go out and do it.”

North Kingstown’s last champion was Justin Zeramby in 2013. Zarrella was a strong candidate to be the next even before he got to high school, having won a middle school state championship.

“My thing used to be football,” Zarrella said. “I played since I was a little kid. Eighth grade, I really started to figure it out with wrestling. I won the middle school state tournament and that’s when I knew this is what I want to do. I set out to be right here.”

The Skippers had two other finalists, both of whom finished as runners-up.

Senior Jack Schartner was seeded 12th at 132, but knocked off the No. 5 seed in the opening round and upset No. 1 seed Liam Mallon of Mt. Hope 8-2 in the semifinals. The title match was an uphill battle as Scituate’s Gabriel Bouyssou pulled away for an 18-5 win, but it was a memorable run for Schartner.

“The past year hit him hard in a lot of different ways,” Clare said. “For him to be able to put a day together like he did, it’s what we were dreaming for him. He found a way to click on the right day.”

Senior Sebastian Ford made a run as the No. 7 seed at 170. He posted a pin in his first match and won 7-0 in the quarterfinals. In the semis, he toppled No. 3 seed Bobby Thatcher of Burrillville 6-2. Chariho’s James Dougherty had too much in the finals, winning 5-0.

For Ford, the next stop is the collegiate wrestling ranks at Division I Sacred Heart.

“Sebastian Ford is a tremendous wrestler,” Clare said. “He won a great semifinal match. Can’t wait to see what he does at the collegiate level.”

Connor Swaim and Tony Tortora took home third place medals for the Skippers. Swaim lost in the semis to the eventual champion at 120 pounds but fought back in the consolation bracket. Tortora also fell in the semis at 195 before bouncing back.

“It was a tough year, a weird year,” Clare said. “The tournament format was a lot different. I thought we could place anywhere between one and five. We finished fourth and I’m happy with the output we had.”

The varsity showing was just part of the story for the Skippers, who won the JV/Freshman state tournament that was held concurrently. Nine wrestlers placed, led by gold medal winners Andrew Downey, Cameron Ryan, Tyler McMinn and Tyler Schartner.

“We had the biggest team in the state here combined. We won the freshman/JV tournament. We have a lot to be happy about,” Clare said. “Setting school records is fun. It’s just trying to keep climbing the ladder until we’re there.”