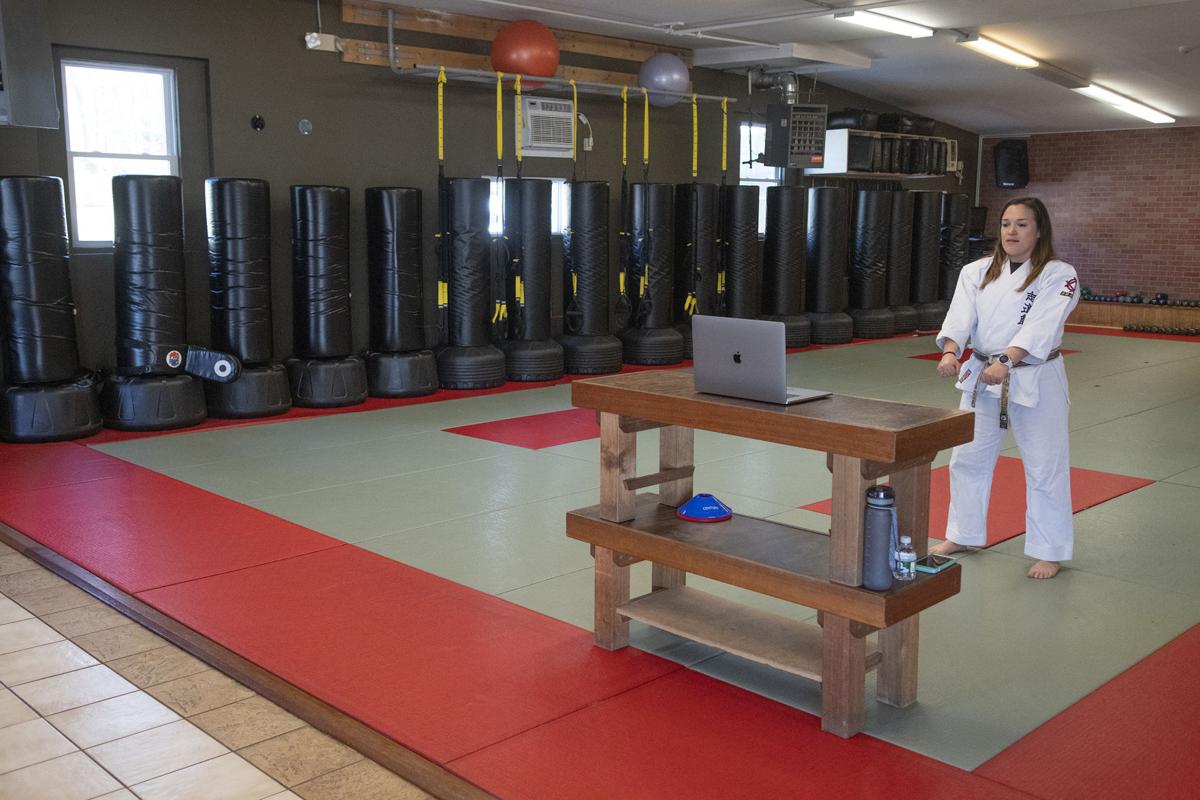 Sensei Kaela Dionne, co-owner of Ichiban Karate & Fitness, hosts a virtual class for her youngest group of karate students in the Wakefield dojo on Tuesday. 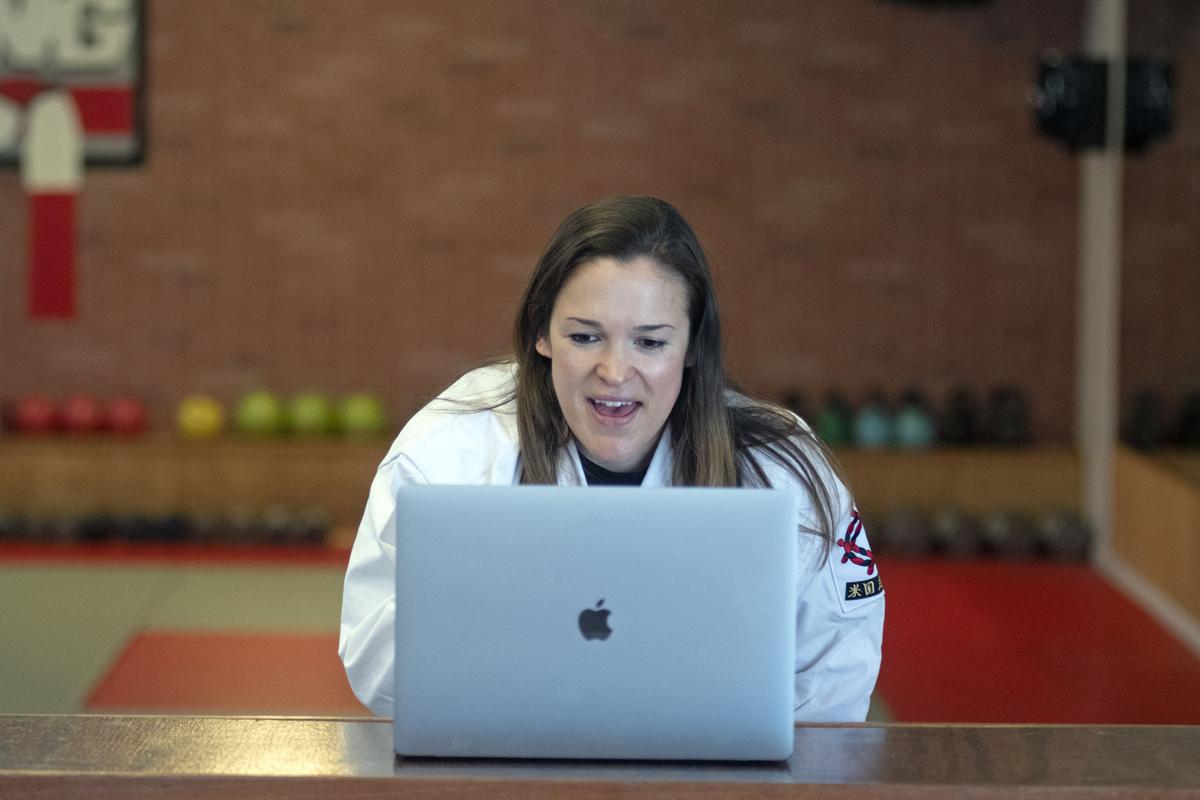 Sensei Kaela Dionne, co-owner of Ichiban Karate & Fitness, talks to her youngest group of karate students while hosting a virtual class in the Wakefield dojo on Tuesday. 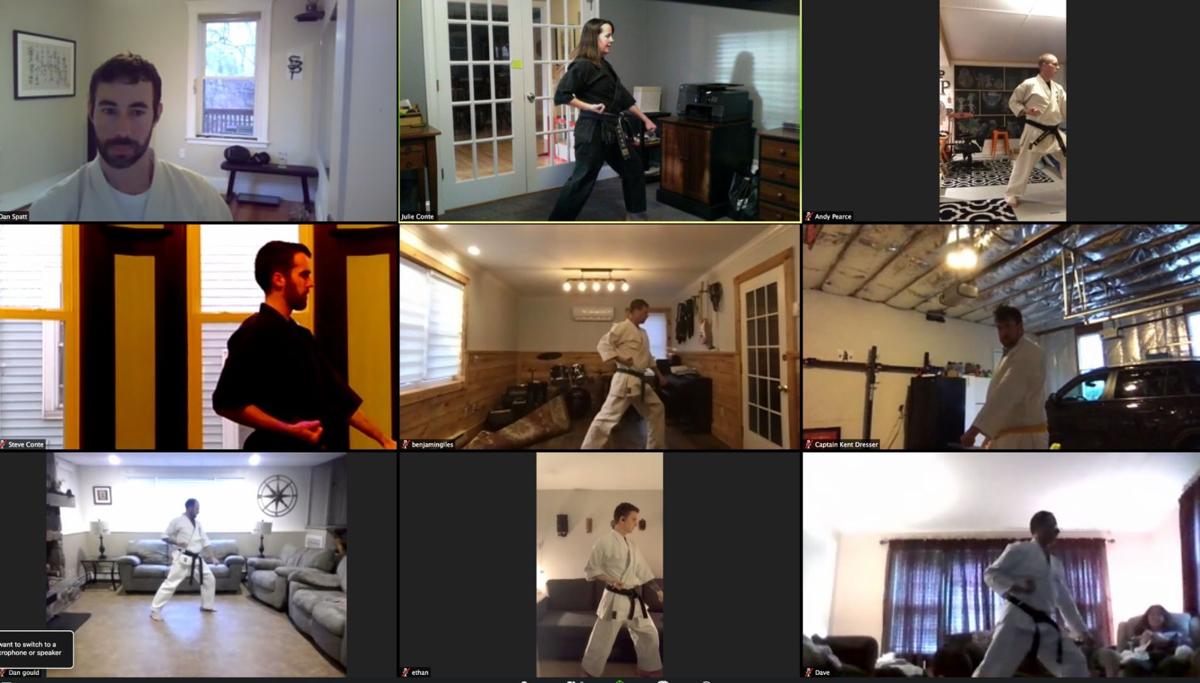 Sensei Kaela Dionne, co-owner of Ichiban Karate & Fitness, hosts a virtual class for her youngest group of karate students in the Wakefield dojo on Tuesday.

Sensei Kaela Dionne, co-owner of Ichiban Karate & Fitness, talks to her youngest group of karate students while hosting a virtual class in the Wakefield dojo on Tuesday.

Teaching karate to pre-schoolers can be challenging enough. Doing it online?

“When you have 15 4-year-olds on Zoom, it’s kind of like an intense Brady Bunch situation,” Kaela Dionne said with a laugh. “And they all talk the whole time.”

But Dionne and Dan Spatt, co-owners of Ichiban Karate and Fitness in Wakefield, are making it work, with the help of the students and their parents. When the coronavirus crisis took hold a few weeks ago, they closed the dojo but decided to keep things going online. Dionne teaches youth classes on Zoom, the online video conferencing system, and Spatt does the same for adult classes, all on roughly the same schedule as before. They’re also hosting general fitness classes on Facebook Live.

After some test runs and adjustments, it’s been a great solution.

“We weren’t really sure how it would work when we started out, but we’ve actually had better attendance virtually than what we had before,” Dionne said.

Ichiban Karate and Fitness, founded by the late Chick Gavitt, has been a fixture in South County for nearly 30 years. The dojo on Robinson Street buzzes with activity, especially on weekday afternoons and evenings, karate classes serving as a popular after-school activity.

Keeping the classes going amid the stay-at-home landscape was both good for business and good for families. There’s a sense of normalcy, even with the different surroundings and technology. It’s a chance to stay active and connect with friends. And parents probably don’t mind the break either.

“I think it’s been comforting for everyone,” Dionne said. “Adults are stressed, but kids are very stressed, too, and they need an outlet. It’s something positive that they can continue doing.”

Dionne and Spatt tested things out during the first week of online lessons and opened lines of communication with students and parents to work out the kinks.

“I had a lot of parents who were open to testing out different ways to teach, and from that, we kind of came up with a schedule for each class of how we would do things,” Dionne said. “What we’ve been doing is a lot of communication with families to see what works best for them.”

Dionne has been teaching both out of her home and by herself in the dojo. Spatt, who lives in Boston, is leading from his home. The online classes follow a similar blueprint to the original, with more room for improvisation and education. Kids have been finding ways to practice without the equipment they’re used to having.

“We’ve had families become a little more involved, using supplies they have or having their parent hold a pillow for punching,” Dionne said. “They’re all being very creative to make it work. It’s really motivating to see. I have a lot of parents sending me videos of their kids practicing.”

“Dan has been working really hard with running adult classes and he’s been incorporating a lot of the history of our style – different ways to train, resources they can read,” Dionne said. “So for the adults, he’s really been trying to expand their knowledge and education in martial arts during this time of being quarantined.”

Unexpected positives have come out of the experience. Dionne said some of her youngest students are getting a better feel for practicing on their own. They’re also more grateful for connections.

“Our kids have been coming into class and really enjoying saying hi to each other, talking to each other before it starts. It’s kind of creating a really nice community where people can cooperate and get together,” Dionne said. “My teen group, instead of having a karate class on Friday, we did a Zoom lunch call because thay all just wanted to chat.”

Dionne’s only experience with karate in the virtual sense before this was the occasional video sent by a student, asking a question about something. Just three weeks later, it’s full speed ahead. Classes will continue, a belt promotion is expected to proceed as scheduled in the online realm, and Ichiban invites anyone interested in using the online option as an opporutnity to try karate to visit its Facebook page.

“Obviously, we’d prefer to be on the mats training, but we plan to continue this as long as we need to,” Dionne said.

In light of the coronavirus pandemic, are you planning on visiting Block Island this summer?