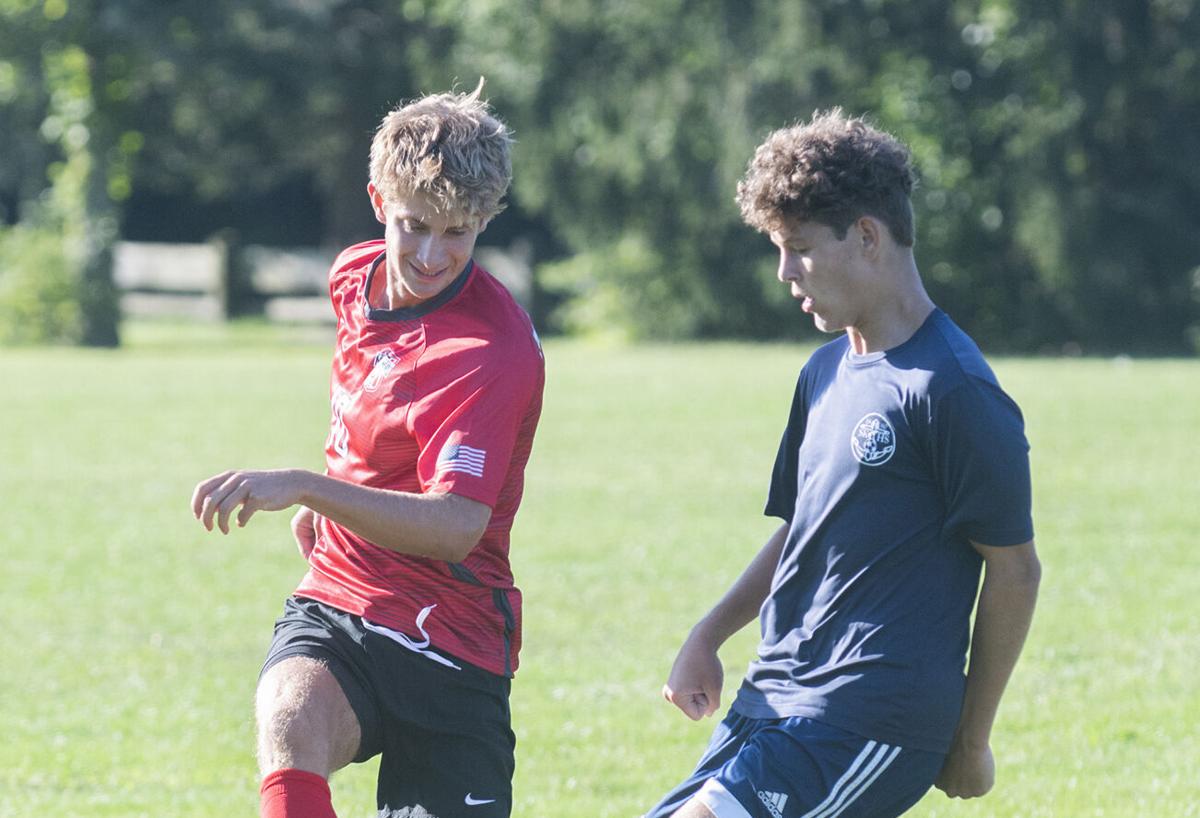 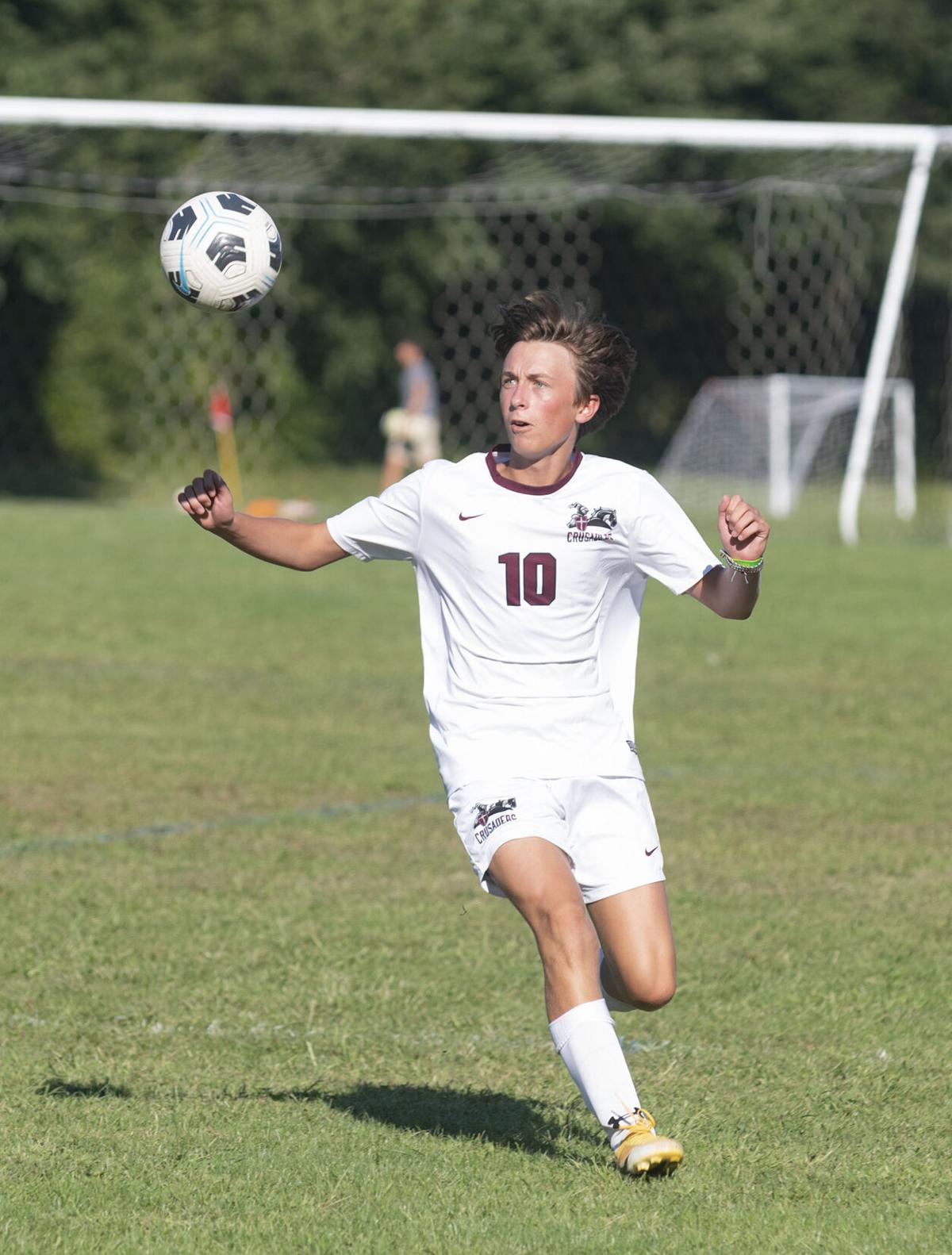 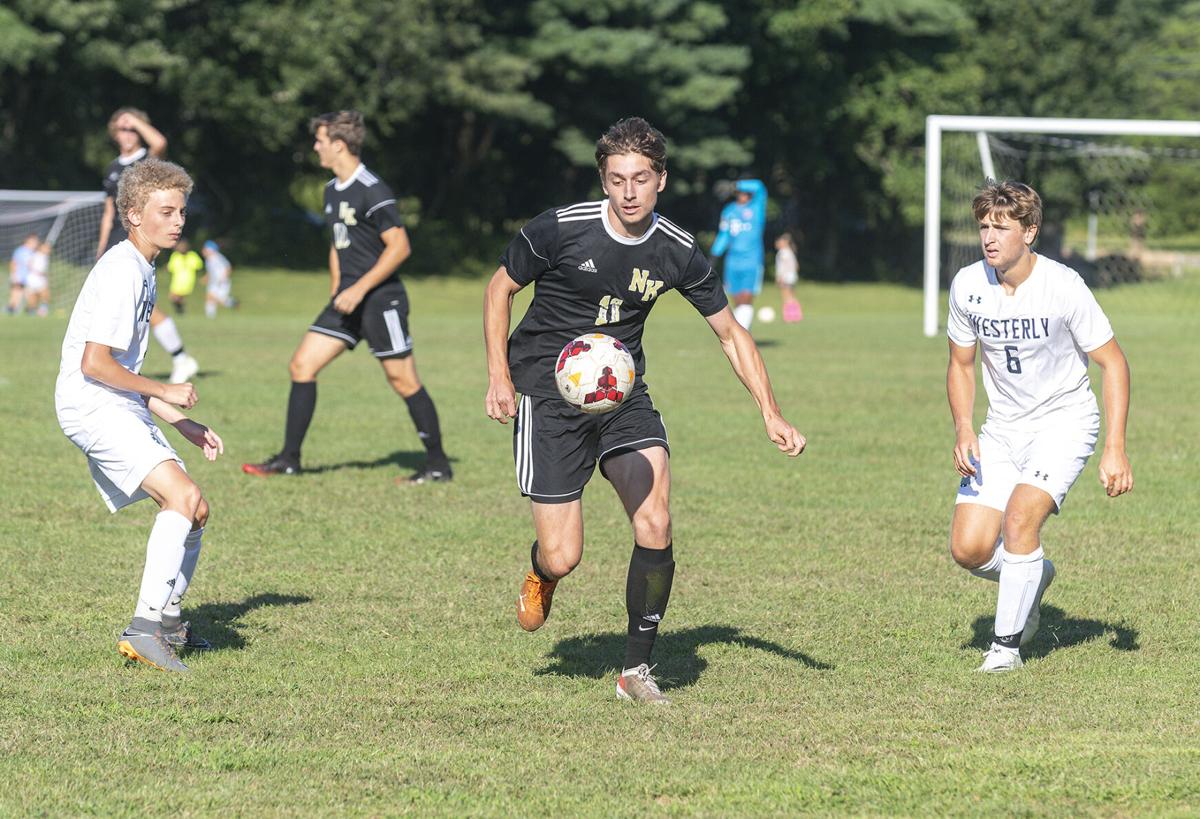 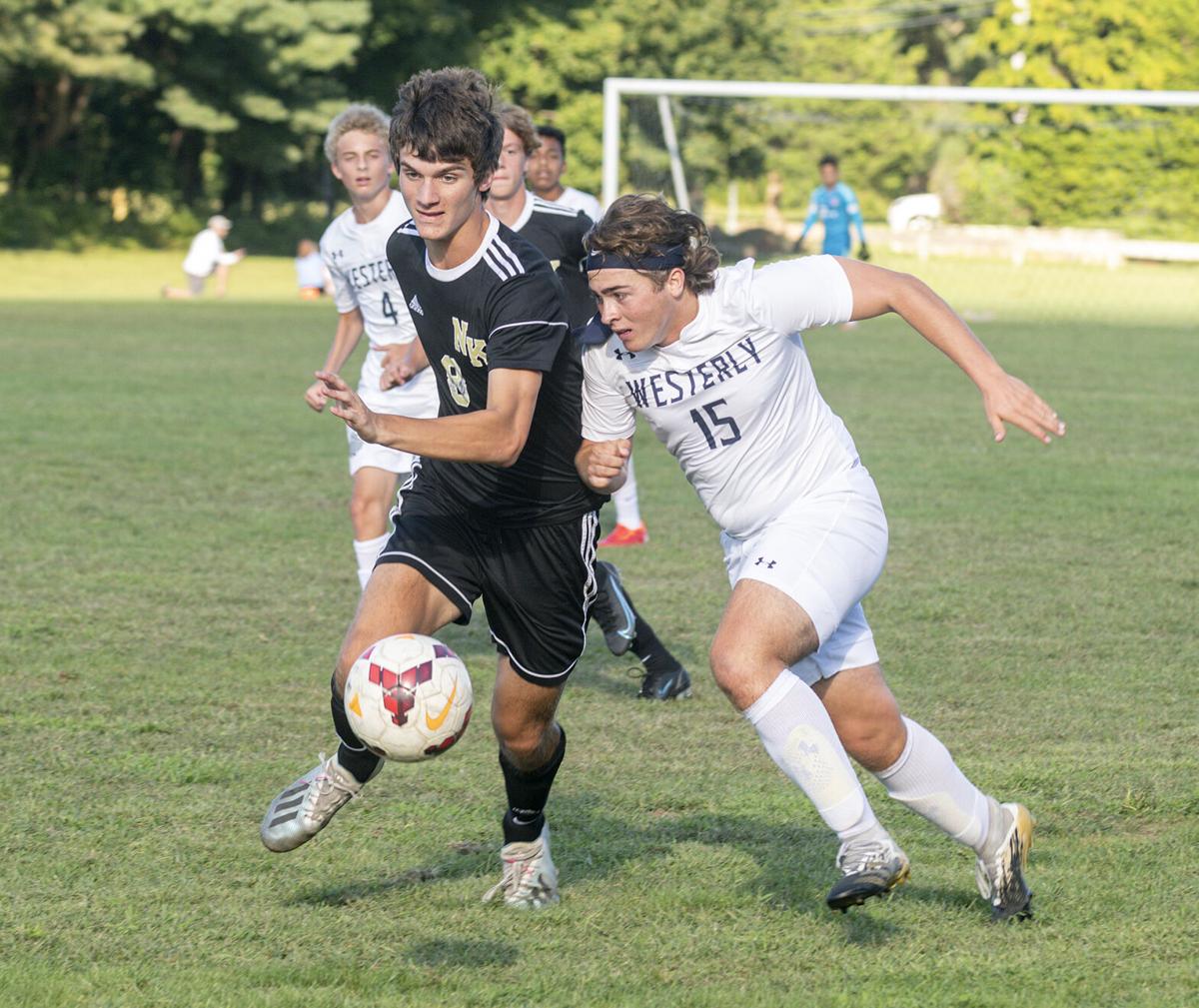 The Rebels don’t plan to wait that long for their next one.

A strong group returns this year, excitement is running high and the Rebels fully expect to be in contention for a second straight crown this fall.

“The group is really good, and we’ve got some incoming guys adding to it,” head coach Adam Howarth said. “It’s really just getting the blend right between the younger players and the more senior players. We lost some big personalities last year, but we also have a couple of players who couldn’t play last year and we’re welcoming them back. I think it’s going to be an exciting year.”

Entering last year’s abbreviated campaign, the Rebels were the powerhouse with a missing piece, having not won the top prize since 1992 despite plenty of success along the way. The team that broke through showed flashes in the regular season, then caught fire in the playoffs. They beat Barrington in a quarterfinal shootout before rolling past La Salle in the semifinals. In the championship round, they beat Tolman 3-1 to end the long title drought.

The excitement from that run has endured through the off-season.

“It’s very high, maybe even a little too high at times,” Haworth said. “It’s controlling that and trying to get the players to understand, you have a target on your back and everybody is trying to beat the state champions. It’s dealing with that little bit of added pressure, but really just taking care of our own game plan and how we’re looking to play. It’s concentrating on us, knowing that if we play our game, we’re going to be successful.”

The Rebels lost some standout players to graduation, like Curtis Granville and Jack Naughton, but bring back a good group. Seniors James Belgrave, Lucas Duquette and Joey Turco are serving as captains. Breakout postseason star Matt May leads the attack, with Danny Biller, Cody Granville and Eli Santos in the mix. Cole Naughton and Sam Naughton have experience, as do Daniel Banks and Landon Bradley. Colin O’Grady returns in goal after handling starting duties throughout last season.

The nucleus is strong and the Rebels want to build up depth around it as they eye another postseason run.

“It’s a really exciting group,” Haworth said. “They’re competing every day in practice, which is what we want. We want to build that culture. We’re trying to improve every day we come out. It’s going to take the whole squad to get through the season properly and be in good shape for the playoffs. We’re trying to prepare everyone so they’re in a good position when we need them.”

South Kingstown’s title was only half of a big fall season for South County soccer teams. Narragansett also ended a long championship drought by winning the D-III crown, its first since 1986.

The title was the culmination for a strong group of seniors, who had endured a three-win season just two years prior and steadily built the program back up. A move to D-III opened the door for big things, and the Mariners stepped through, going 4-0-1 in the regular season and rolling through the playoffs, winning three games by a combined 7-0 score. They topped Johnston for the title.

While the championship was the end of the road for the senior class, the players who provided depth and support hope it was just the beginning for them.

Among the standouts back in the fold are Tyler Reissner and Scott Reilly, both of whom earned all-division honors last year. Reissner anchors the back line that made the Mariners very tough to score against last season.

The Mariners held their own against fellow champ South Kingstown in an Injury Fund matchup and started league play with a bang, rolling over Prout 7-1 on Tuesday.

Skippers want to keep it rolling

North Kingstown is tough to beat when it’s at its best. Each of the last two years, the Skippers were at the top of the D-I standings, finishing 12-1-2 in 2019 and going 5-1 to tie for the best mark in last year’s abbreviated campaign.

With a lot of key players still in the fold, the Skippers are aiming to be in the top tier again, while hoping to do damage there by playing their kind of game.

“We’re trying to play simple,” head coach Paul Fanning said. “If there’s space in front of you, be aggressive and attack it. And we’re trying to speed up our thought process and speed up the way we play. I think we’re better when we play aggressively and we’re average when we play passively.”

It’s a strong crop of returning players who will try to lead the charge in striking that balance. As always, the Skippers lost a few standout players to graduation, but some of their top weapons from last year are back. Along with some players who were waiting in the wings, the roster looks as good as ever for one of the state’s top programs.

“We’re always a team that’s the sum of our parts,” Fanning said. “When we lose guys who have started a lot of games, it’s going to take us a little while to see how the parts go together. Early on in the year, we like the group and we like the skill. It’s about figuring out what the right group is to get the job done.”

Seniors Pedro Barajas, John Schultz and Ryan DeLessio are taking on captain duties. Barajas returns for a second straight season as the starting goalie, after a standout showing in 2020. Schultz is one of the speediest forwards in the league, while DeLessio has been a play-making midfielder since the 2019 campaign.

A first-team all-state selection in 2020, Connor Froberg leads the junior class after emerging as a catalyst for the Skippers with his all-around play. Froberg and junior classmates Dan Goba and Chase Zorner won a national cup with their club team, Bayside United, over the summer.

“Lots of 11th and 12th graders who have played lots of minutes,” Fanning said. “We’re expecting big things as far as putting together a consistent season.”

In addition to being aggressive, the Skippers want to make sure they’re finding the back of the net consistently. With their skill and depth, they can control play, but that’s only part of the story.

“Our big thing is always that we want to be scoring goals consistently,” Fanning said. “It takes the pressure off everything. We’re looking for people to step up and do that.”

Lind takes over for Crusaders

Prout has a new boys soccer coach but not much else is new for the Crusaders, who have 12 seniors set to lead the way this season.

“We have 12 seniors, so it’s a big group,” Lind said. “I believe we have a team with a lot of heart. We’re working on some of our skill play. I think we’ll do well this season.”

Lind coached the past four years at Rocky Hill. Before that, he was at Wickford Middle School. He coached boys soccer in the high school ranks in Tulsa, Oklahoma, before moving to Rhode Island 24 years ago. Several of his children were standout players at North Kingstown High School, including son Preston, who is serving as an assistant at Prout this season.

“I’m looking forward to it,” Lind said of joining Prout. “It’s going to be a lot of fun.”

This is the second straight season with a new coach at the helm for Prout, after Jonathan Pereira took the reins last year before stepping away.

The Crusaders returned to Division III last season and made the playoffs, narrowly missing out on a first-round upset of Johnston, who ended up as the runner-up.

Coutu and Pimentel were first-team all-division selections last season. Fonseca and junior Drew McCaughey are expected to lead the attack. Junior Will Bussey joins Pimentel in anchoring the midfield. The defensive unit is a little younger, with sophomore Ryan Barrett and freshman Matthew Chofay helping to lead the charge.

The Crusaders drew a challenge for their opener as they faced defending champ Narragansett on Tuesday. The Mariners prevailed 7-1.

Prout will try to bounce back Thursday against North Providence.

Have you or your family been personally affected by the opioid epidemic in Rhode Island?

The Rhode Island Department of Health (RIDOH) and the Rhode Island Department of Behavioral Healthcare, Developmental Disabilities and Hospitals (BHDDH) issued an alert this week to warn residents of an increase in opioid overdose activity throughout the state. The alert comes on the heels of the state recording 48 reports of opioid overdoses from hospital emergency departments from September 12-18. Have you or your family been personally affected by the opioid epidemic in Rhode Island? Let us know in this week's poll question below.