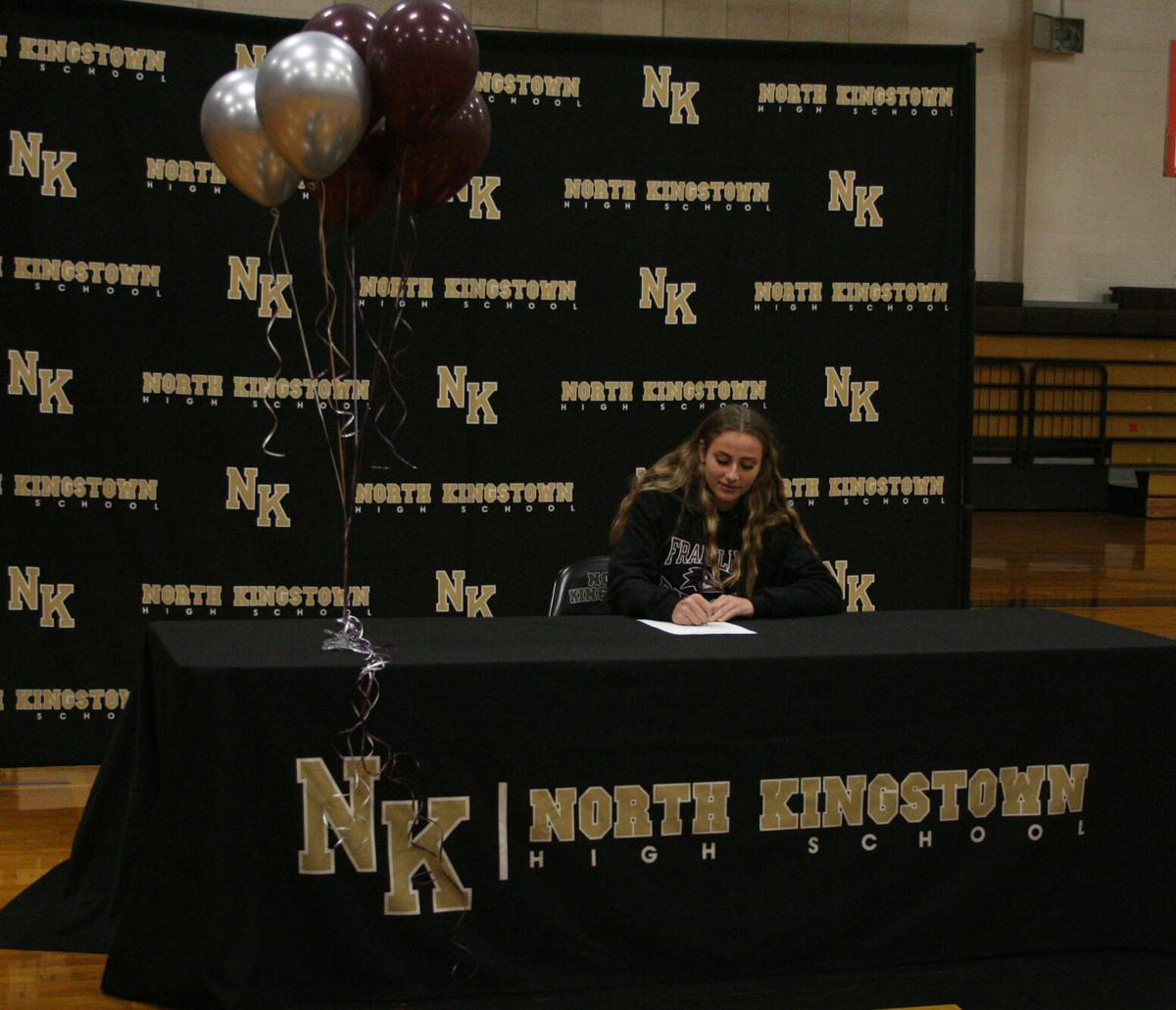 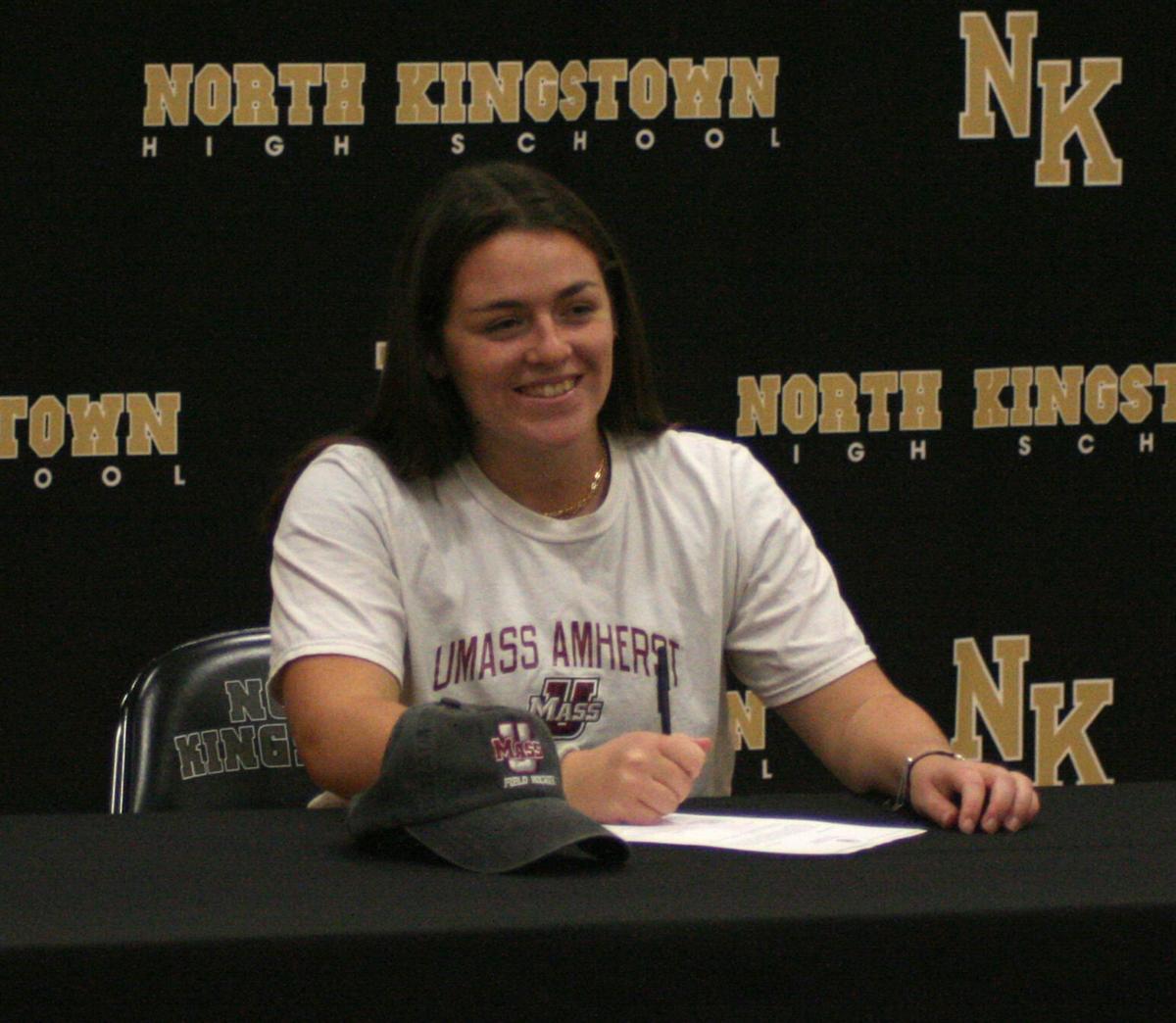 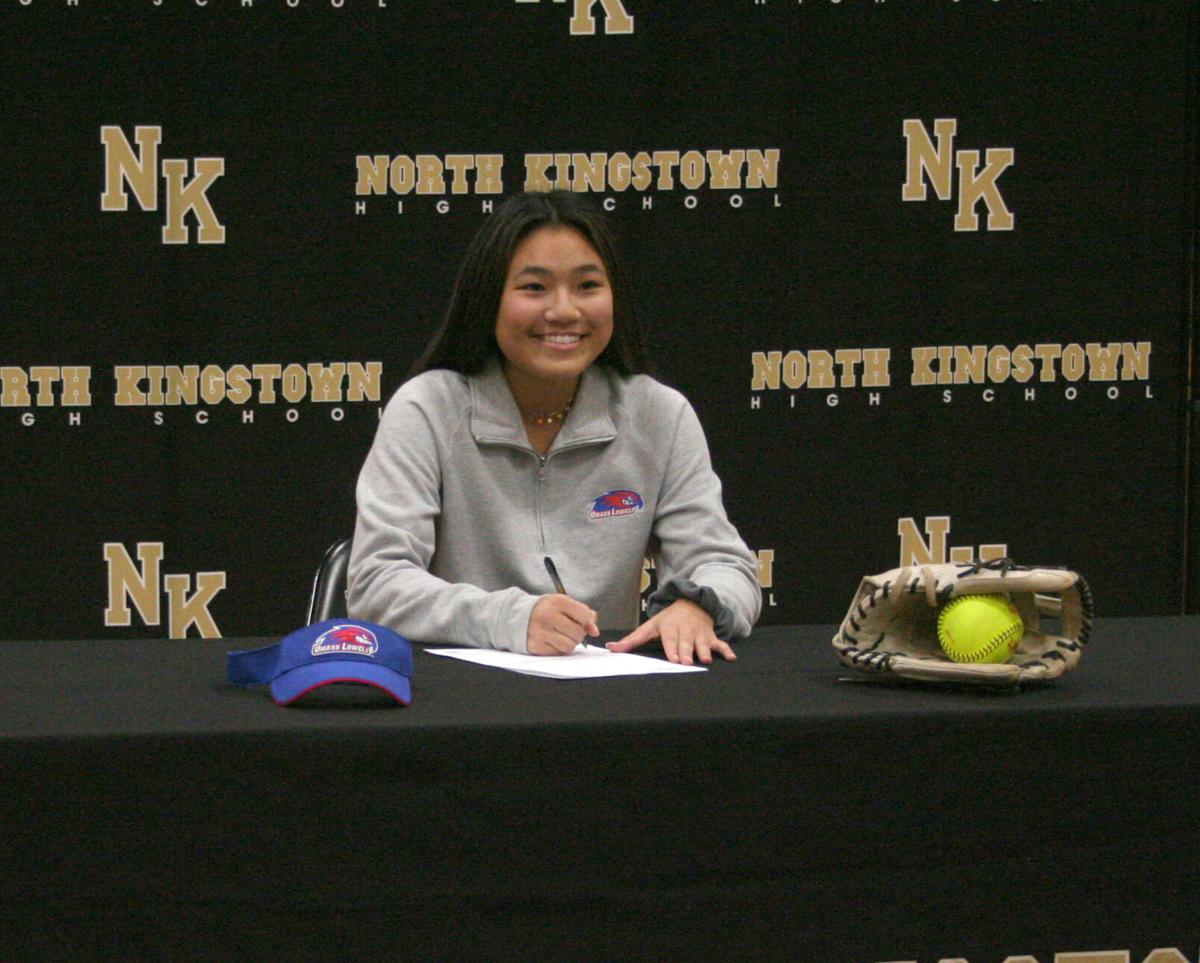 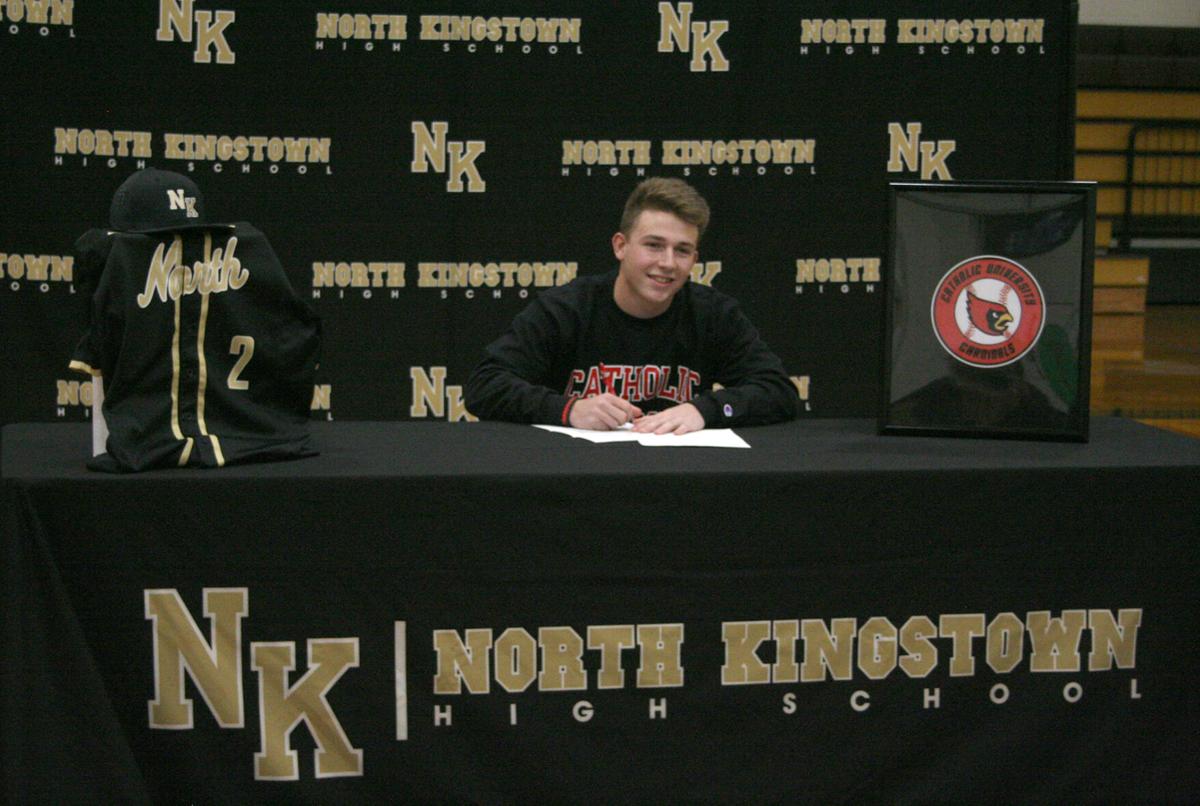 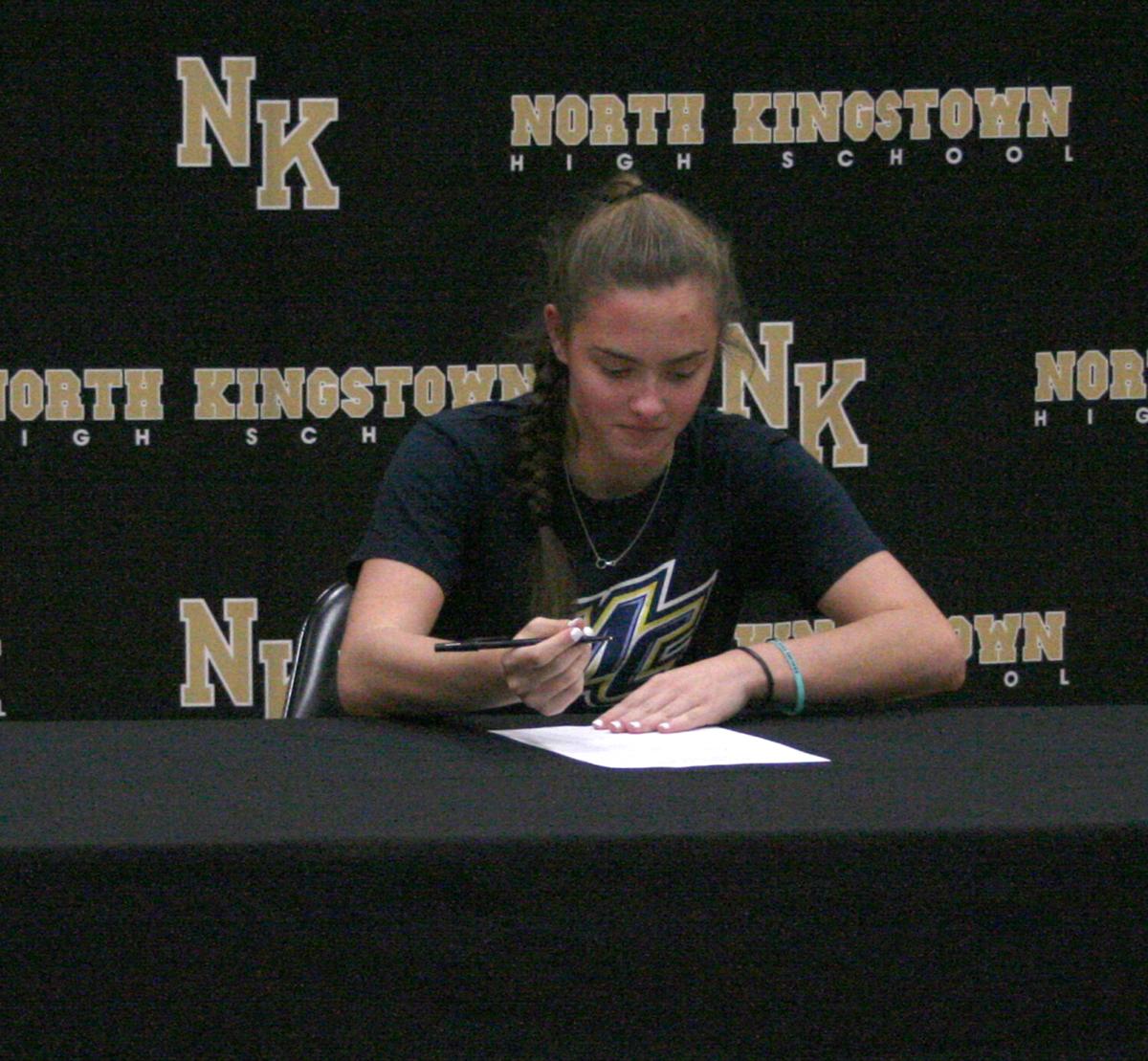 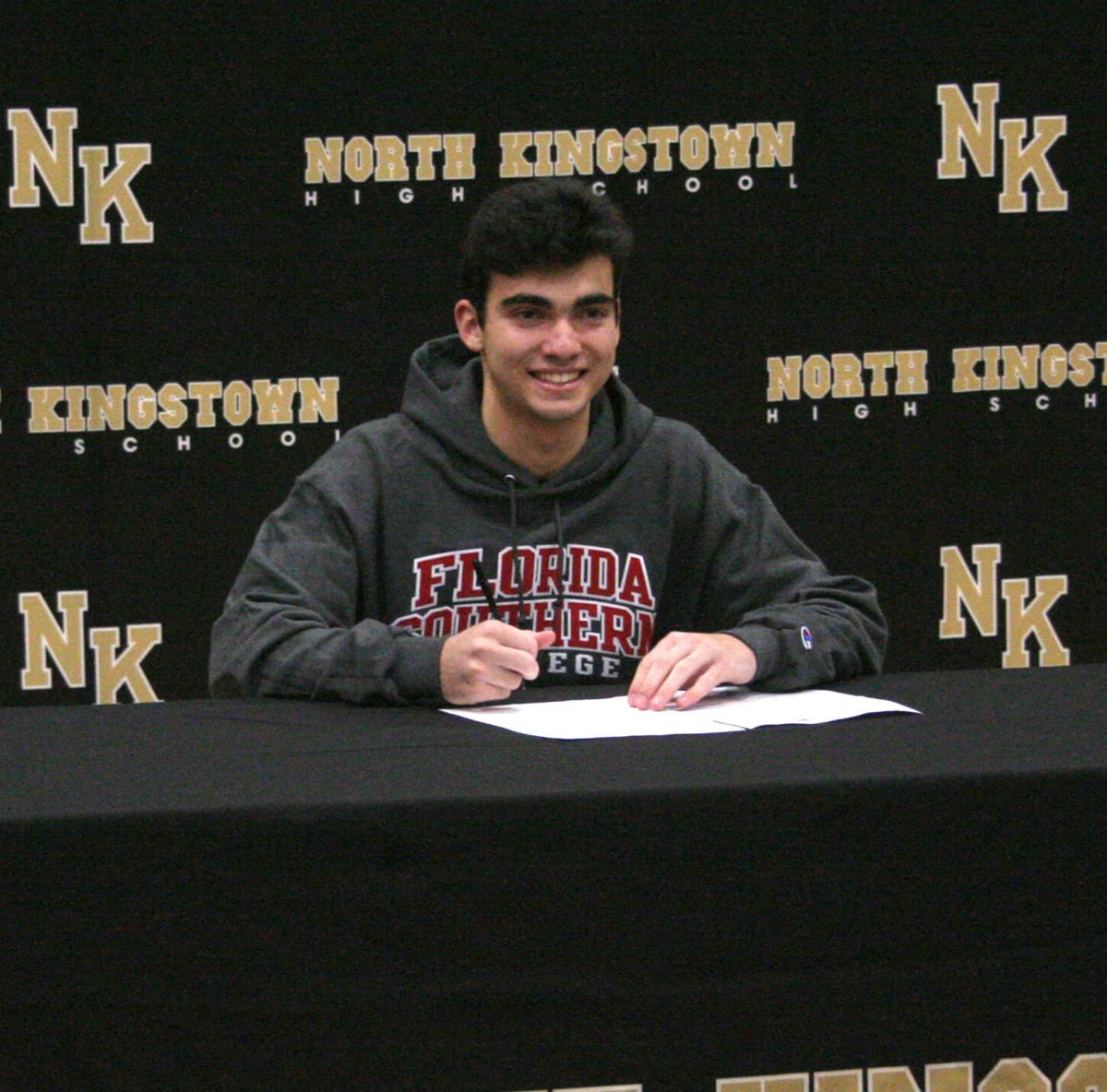 As with most events in 2020, North Kingstown High School’s celebration of its college-bound athletes was a little different. Only immediate family of the signees could attend the brief ceremony, and they were spaced out across the gymnasium. Masks came off just for photos.

But the pride remained.

“Only seven percent of high school athletes go on to play college sports,” North Kingstown High School athletic director Chris Cobain told the families at the Nov. 24 ceremony. “We’re as proud as can be to recognize these student-athletes and we hope to have more to recognize in the spring.”

Three Skipper seniors have made commitments to play their respective sports at the Division I level – field hockey standout Dempsey Campbell, volleyball player Lauryn Mattiucci and softball player Emily Tow. The ceremony also honored three others who will play Division II and Division III sports in Brooke Bolster, Justin McCarthy and Levi Shapiro. A seventh athlete, soccer player Haleigh Ward, was unable to attend the ceremony and will be saluted at a later date.

Campbell is headed to play field hockey at the University of Massachusetts. The three-time all-state selection – soon to be four-time – helped the Skippers to the Division I title as a freshman in 2017 and a runner-up finish in 2019. Her stick skills always caught eyes and her ability to score goals was nearly unmatched in the state throughout her career.

Playing sports in college has been a goal since Campbell was 8 years old, she said, though the initial plans revolved around ice hockey. When she transitioned to field hockey, she fell in love and embraced a new objective.

“For the past five years, I have been playing competitive field hockey and since then my goal has been to play Division I,” Campbell said. “I cannot wait to continue to play the sport that I love for four more years.”

Campbell made a verbal commitment to UMass in November of her sophomore year and could finally make it official this year. The Minutewomen are a perennial contender in the Atlantic 10, with their best success of late coming in 2015 and 2016, when they won conference tournament titles.

Campbell is the latest in a long line of North Kingstown field hockey alumni to earn an opportunity at the next level. The recent list includes Katie George (Middlebury), Meghann Maguire (Fairfield) and Kate Vieira (St. Francis).

“I chose UMass because I felt at home the second I stepped on campus,” she said. “The athletics and academics were everything I was looking for in a university. The team dynamic, and the relationships the players have with the coaches were two huge reasons why I chose UMass. UMass is also known for having the No. 1 dining hall in the country, so that definitely was a bonus!”

Mattiucci is headed to play Division I volleyball at Merrimack College in North Andover, Massachusetts. She will join a program that is in the midst of transitioning to the highest level of competition. The school began the move to Division I for its entire athletic department during the 2019-20 school year. Previously, only the school’s hockey teams played at the Division I level. The women’s volleyball team is joining the Northeast Conference. The program played in the Division II Northeast-10 Conference until the switch. New head coach Stephanie Kazmierczak was hired in August.

Mattiucci was a steady contributor for the Skippers in the 2019 season, playing at various spots and excelling on the back line. She was part of a deep team that went 16-0 and won its third consecutive state championship. The lineup featured two Division I players, with Haley Sawyer now at the University of Rhode Island and Mattiucci headed to Merrimack. The 2020 high school volleyball season was not played this fall, penciled in for an early-spring start.

Tow is bound for UMass Lowell as the latest North Kingstown softball standout to move into the college ranks, following in the footsteps of Kiara Oliver (UMass) and Meg Gormley (Brown). The speedy outfielder has been a fixture for the Skippers in a new era, following their run of three championships in four years. She helped the team to a 10-8 campaign in 2019, before last season was canceled due to the pandemic.

“Softball has always been a huge part of my life,” Tow said. “Being able to play at the next level is an accomplishment; however, it does not mean that all the work stops. It just means that I have to work harder than ever.”

Tow made her decision last year. UMass Lowell went 15-3 in the America East Conference in the 2019 season.

“I choose UMass-Lowell because I love the overall environment of the school and the dynamics of the softball team,” Tow said. “When I went on my visit, the coaches and the team made me feel welcome and I instantly felt at home. The academic variety, as well as the fact that the coaches encourage all majors was a plus.”

Bolster will join her volleyball teammate Mattiucci in the college ranks at Franklin Pierce University in Rindge, New Hampshire. The Division II Ravens play in the Northeast-10 Conference and were a conference tournament quarterfinalist in 2019. Beyond volleyball, Bolster said she loves the fit of the school.

“I chose Franklin Pierce because of the small class sizes and the one-on-one attention that I will receive from the professors,” she said. “Additionally, I choose FPU because of the amazing health science program and the beautiful campus setting. At FPU, I will be challenged academically as well as athletically to become the best version of myself.”

Bolster emerged last fall as a key player for North Kingstown’s championship squad, stepping into the starting lineup at middle blocker and earning first-team all-state honors. She only started in the sport as a freshman.

“It means so much to me to be able to continue playing volleyball at the next level,” Bolster said. “Since freshman year when I started playing volleyball I have known that I wanted to continue to play at the higher level. I also knew that I would have to work very hard to make up for all of the years that I missed learning the game. Ever since then I have been working hard to improve my skills with the mindset to improve each time I play.”

McCarthy is set to play Division III baseball at Catholic University. The senior has had a memorable high school career at North Kingstown, winning championships on the football field, playing big minutes on the ice for the school’s hockey team and grabbing a starting varsity job as a freshman for the baseball team.

“Playing college baseball has always been a dream of mine,” McCarthy said. “My family and coaches through the years have always supported and motivated me to reach my athletic goals from the diamond to the football field to the ice rink, always trying to be the best athlete I could. Baseball however has always been my passion. I can’t imagine graduating high school and leaving baseball behind. I am so lucky to be given this opportunity to continue playing the sport I love and better myself at Catholic over the next four years.”

In between games for the Bay Sox on the travel circuit and the Slocum Connie Mack team last summer, McCarthy narrowed down his choices and settled on Catholic, which is a contender in the Landmark Conference.

“Catholic gives me the best opportunity to bring my academic and athletic abilities to the next level with the help from a great coaching staff,” McCarthy said. “The D.C area brings a totally new atmosphere where I can meet new people and have many great job opportunities in the future. I couldn’t be more excited to get started next fall after finishing business at NKHS this spring.”

Shapiro was part of North Kingstown lacrosse’s young core in the 2019 season, manning the net as the Skippers began to make headway with a playoff berth. College lacrosse has always been a goal, and he’s coveted a chance to play for Florida Southern ever since attending the program’s prospect day.

“I’ve always wanted to play college lacrosse, specifically in the Sunshine State Conference,” Shapiro said. “I realized the first time I went to their prospect day at Florida Southern College, it was the right fit for me. I felt a connection with the team and coaching staff. Coach [Marty] Ward was also a college goalie like myself and I will learn a lot from him. I felt he truly believed in me and my future at Florida Southern. Not only is Florida Southern consistently at the top of their conference, academically I intend on majoring in business, and FSC offers one of the top business schools in the nation.”

Making his commitment official was a special moment.

“Signing day was a dream come true,” he said. “I am very grateful to have the opportunity to play the sport I love at the college I want to attend.”

Ward could not attend the signing ceremony but has made a commitment to play soccer at Division II Assumption College. Ward was a contributor on a veteran North Kingstown team that made the semifinals in 2019, then led the charge in this pandemic-shortened season.