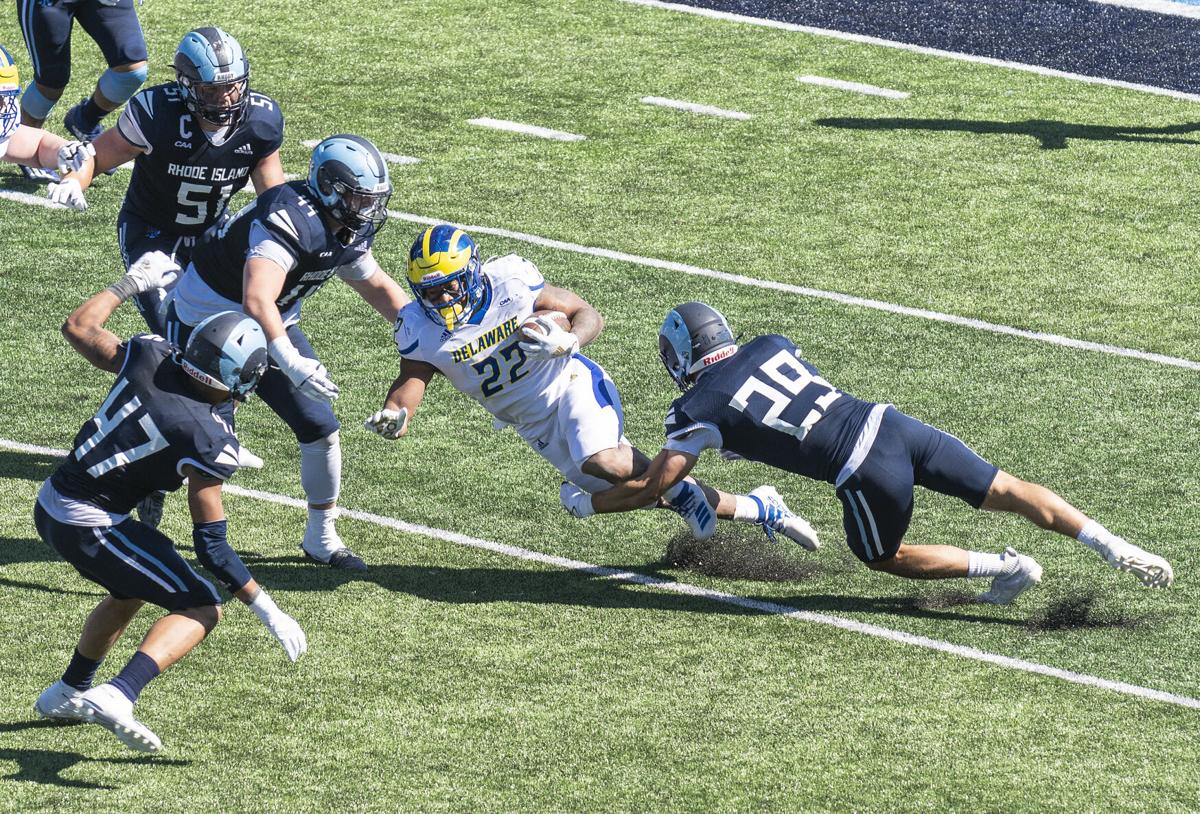 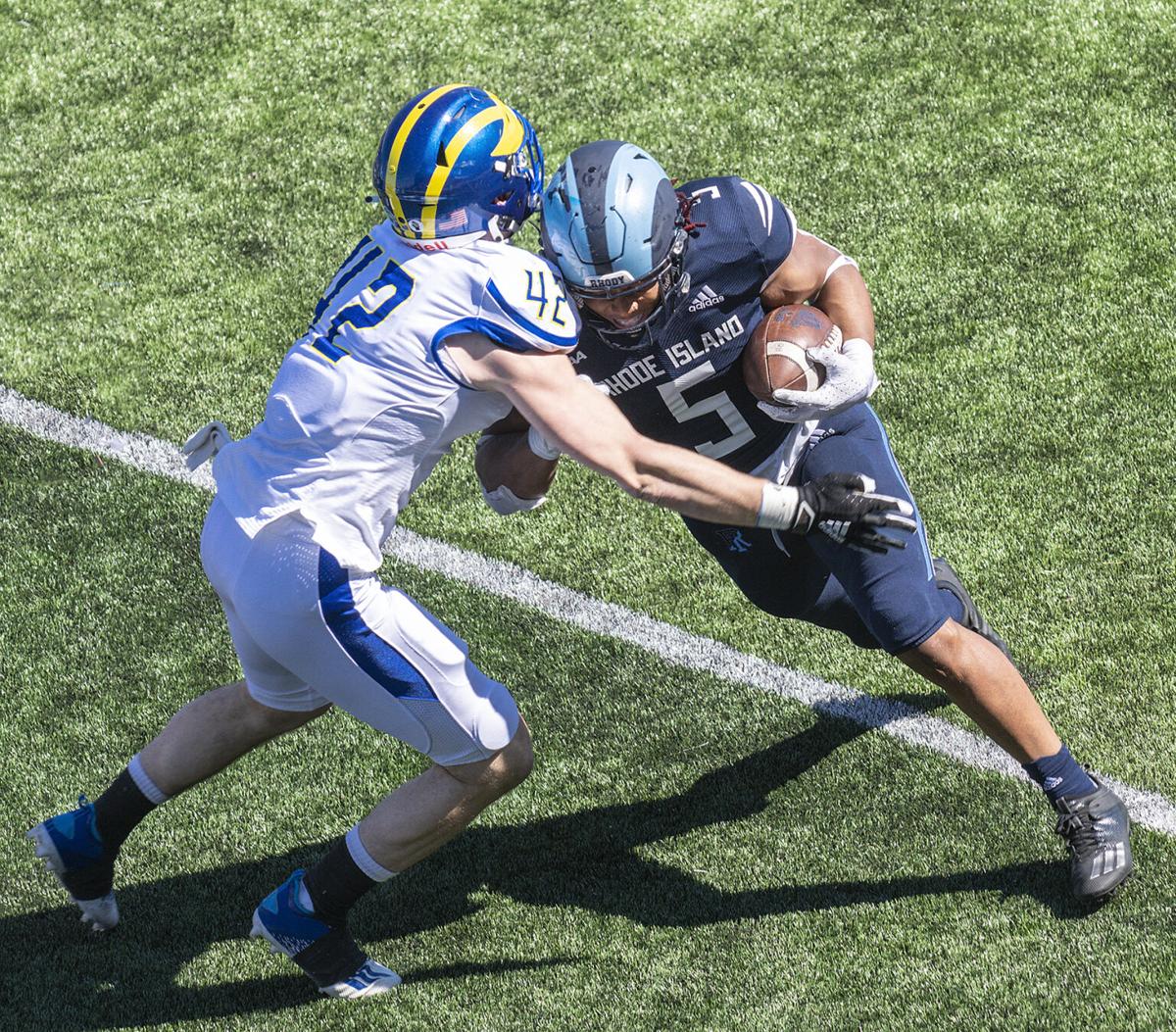 SOUTH KINGSTOWN — Delaware was the third straight ranked opponent on the University of Rhode Island football team’s schedule and looked like the best of the three on Saturday at Meade Stadium.

The No. 9 Blue Hens controlled the clock with a powerful running attack and clamped down on URI’s offense en route to a 35-21 victory, handing No. 18 URI its first loss of the season in its home opener.

URI was coming off overtime victories over Villanova and Albany but struggled to get their footing. The Blue Hens created an enormous disparity in time of possession thanks to their success in the ground game, with 41 minutes of possession to URI’s 18. That meant limited chances for the Rams, who did their best to make the most of them but couldn’t keep up. Delaware took a 14-7 lead in the second quarter then pulled away with two third quarter touchdowns. The Rams scored a touchdown late in the third quarter and another in the fourth but couldn’t get closer than 14 points.

“We’d much rather be celebrating a close victory. I think when we look at the film, we’ll be able to evaluate the areas that need improvement,” Fleming said. “I think it’s obvious from the outset that we need to control the ball a little better on offense and stop the run on defense.

“But the message is really to continue having the attitude of gratitude that’s gotten us here. The opportunity to play is the first and foremost gift we’ve gotten out of 2021. We’ve got very good character on this football team. How we react to a loss will be equally as exposing to our character as anything else. I told them, ‘We’ve got to put this game behind us just like we put the first two victories behind us and go back to work.’”

URI’s defense had allowed just 10 points to Albany a week before but struggled against Delaware’s rushing attack. Dejoun Lee racked up 221 yards on 22 carries and his team finished with 361 yards rushing.

“They were pretty big up front and I think there were some fit issues that we had,” Fleming said. “When you sell out on a short-yardage play, sometimes that happens. At the end of the day, we got a little worn down. I think that was probably a factor of a number of different things – couple of tough weeks in a row, a little bit more heat out there. Delaware coming off a weird bye week. But there’s no excuses – you’ve got to stop the run to win football games. They did a good job and they’ve got a nice little back.”

URI totaled 221 yards of offense to Delaware’s 551 but managed to make things at least a little bit interesting down the stretch and scored more points than any Blue Hen opponent this season. Just before the end of the third quarter, wide receiver Ed Lee gave Rhody a spark, taking a pass 62 yards to the Delaware 1-yard line. Brandon Robinson scored on a 1-yard plunge for his second touchdown of the day to make it a two-score game.

URI forced a three-and-out on the ensuing Delaware drive, but was unable to maintain its momentum. After a punt of their own, the Rams watched as Lee broke off a 74-yard touchdown run.

The Rams managed one more touchdown drive, as freshman Jamall Mensah caught a 5-yard pass from Kasim Hill with three minutes to go. URI just missed out on recovering an onside kick, and Delaware finished things off soon after.

“Disappointed in the outcome,” Fleming said. “Proud of the team. Defensively, you can ask for a lot more – we’ve got to do better in short yardage and we’ve got to do better in stopping the run game. There were some gashes and some explosions that we’ll work on. But I thought that they were really aggressive and played very, very hard. Giving up two touchdowns on fourth-and-1 obviously stings. Offensively, it took us – well, I don’t know if we ever found our rhythm. It was a tough day at the office and I do give a lot of credit to Delaware, coach Rocco and their defensive staff. That’s a big, physical, good-looking team. We had our chances.”

Hill and Robinson both took snaps at the quarterback position, after Hill had handled most of the duties in the first two games of the season. Hill finished 5-of-10 for 26 yards and a touchdown, while Robinson was 3-of-6 for 85 yards.

“Kasim was struggling a little bit. He missed a full day of practice on Wednesday, which is a critical day,” Fleming said. “There was a concern for illness, which turned out to be non-COVID related. Thankful for that, but still had to take precautions necessary to keep him separated from the group. He was struggling. The offensive staff saw that [Robinson] had gone down there and got a touchdown for us. The entire offense, we need to go ahead and evaluate. Not burn it down or anything – we just need to play better . . . We’ve got three good quarterbacks. We’ll let the competition continue and play the one that gives us the best opportunity to win. ”

The game was URI’s first at Meade Stadium since the 2019 season finale. A limited number of fans – students and player families – were permitted in the stands, a welcome sight for the Rams.

“I would like to make a sincere thank you to the state of Rhode Island and the University of Rhode Island for the efforts made to be able to host an event here on campus, with people,” Fleming said. “I think it’s a tremendous welcome opportunity. I thought it was a great idea for our students and our faculty to be able to go to something like this. I can’t go any further without saying our appreciation as a football program for everybody making the sacrifices necessary to allow us to compete.”

The Rams remained in the Stats FCS Top 25 at No. 22 despite the loss. They’re home again the next two weeks, against New Hampshire and Maine, both of whom are receiving votes in this week’s Top 25.

“We’ve got some very tough football games ahead of us and we’ve got to regroup and find a way to win the next one,” Fleming said.