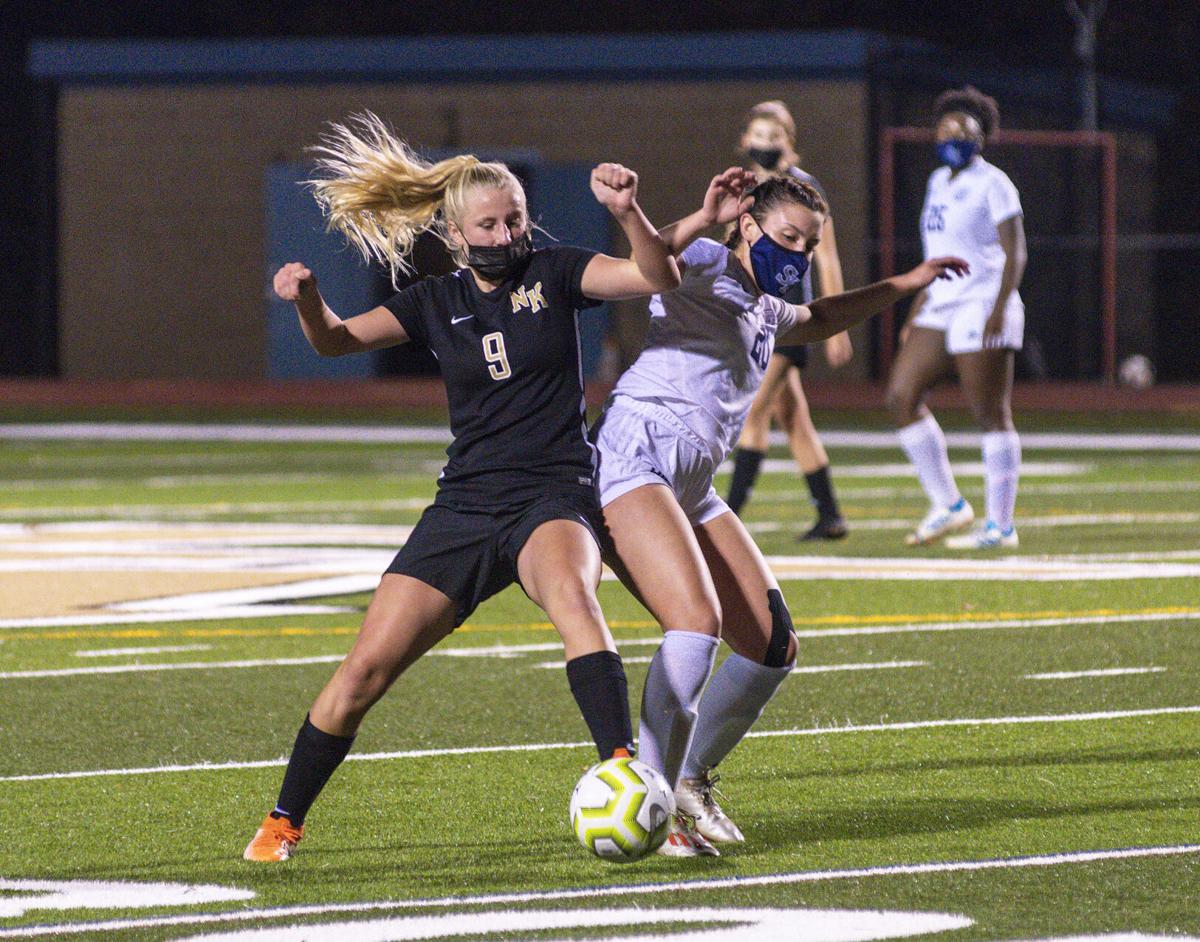 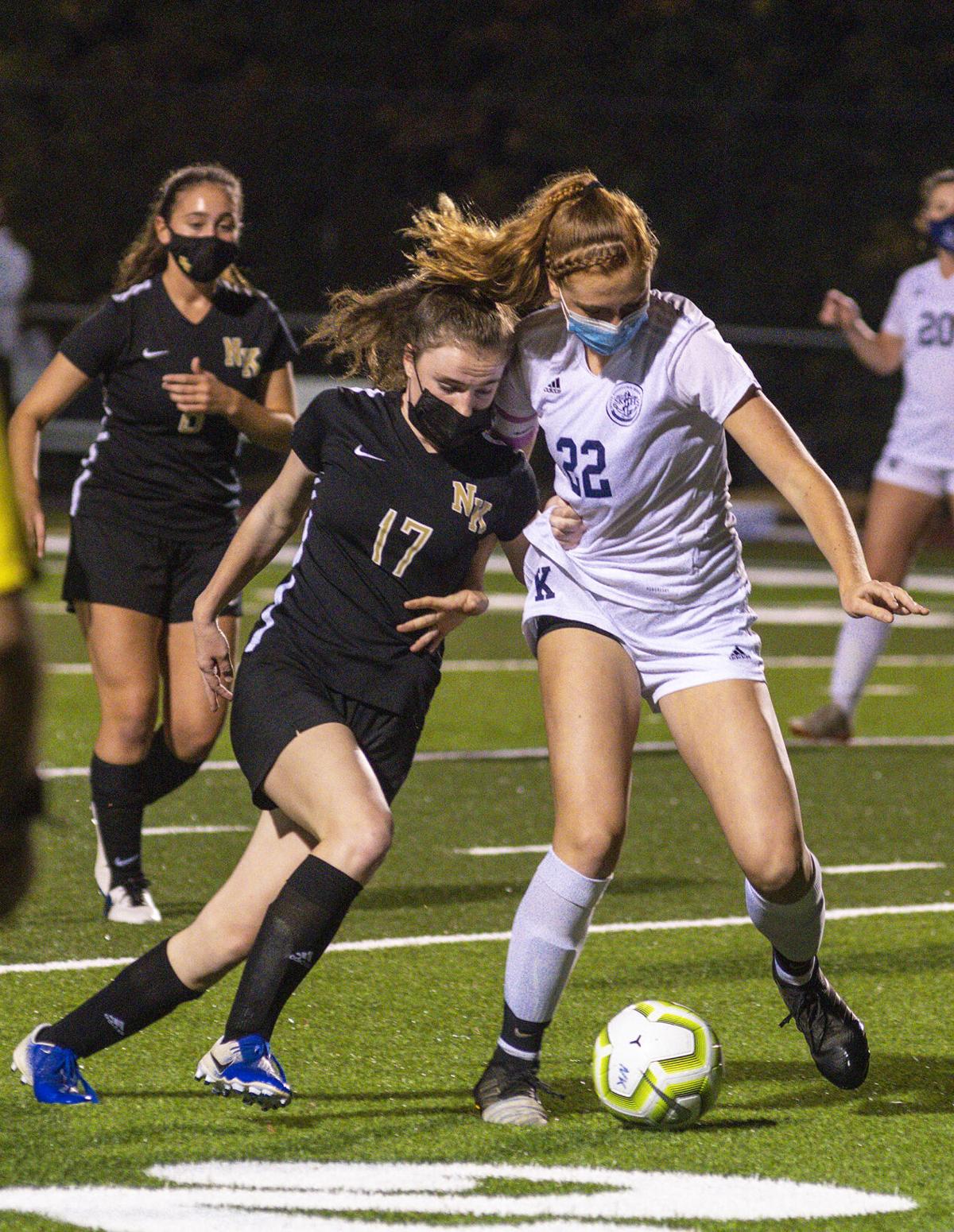 NORTH KINGSTOWN — Emmie Gaston’s finishing touch turned what was already the best performance of the season into a performance worth celebrating for the North Kingstown High School girls soccer team.

Gaston headed in a corner kick by Sadie Souls in the 79th minute as the Skippers beat rival South Kingstown 1-0 on Friday night at the Anthony C. Perry Athletic Complex.

“It was a great feeling, for everyone and myself,” said Gaston, a senior captain. “We needed that. We were playing a great game from the start. I feel like we just didn’t have the finishes, but we were playing really well.”

While the defending state champion Rebels had golden opportunities of their own, mostly on breakaways, the Skippers carried the action for big chunks of the game. With chance after chance slipping away, goalkeepers on both sides playing well and time ticking down, a scoreless draw seemed likely.

Then the Skippers struck. Souls hit a high-arcing corner kick from the left. Top scorer Haleigh Ward was in position but the ball sailed – directly to Gaston, who headed it just inside the right post.

“Amazing ball. Haleigh had a really good shot at hitting it but it went over her head,” Gaston said. “Coach told me to go in so I just went for it. It hit my head and it went in. We were really happy.”

The win was the first for the Skippers since their opener Oct. 12. They had played Prout to a tie and lost to Cranston West since then.

South Kingstown fell to 1-2 in league play and 2-3 overall. Its other Division I loss was also a 1-0 affair against Smithfield, but Friday’s showing was better. The Rebels nearly broke through multiple times and had one of their best chances in the final minutes. Anna Kelly broke loose on the right and got around charging goalkeeper Kathryn Bourgeois, but her shot skipped just a few inches wide of the far post.

Before that, it was Jami Hill repeatedly getting behind the North Kingstown defense. Bourgeois made several sliding stops, while a few other shots were off-target.

“Kathryn came up big tonight,” D’Arezzo said. “She came off her line – maybe a little too much, she was making me nervous – but it worked.”

Hill and Souls of North Kingstown had matching breakaway chances in the first half. Bourgeois made a sliding stop for the Skippers, while Julianne Hannafin did the same for the Rebels.

There was no frustration for the Skippers as they kept firing away.

“You have to push through those types of struggles,” Gaston said. “It was a team effort having that mindset.”

South Kingstown had one more chance in the final minute as Kelly served up a cross for Tayshia Cary, but Bourgeois made a leaping grab to stop it and seal the win for the Skippers.

“That’s a good team,” D’Arezzo said. “We beat them to the ball and put the pressure on. They had chances, too, but we buried our chance when we needed to. Good ending. Good win to build on.”

It was a memorable moment, especially with this season’s backdrop.

“It’s really nice as seniors,” Gaston said. “We weren’t expecting to have a season. We’re really grateful for that, even with the masks and the other limitations.”