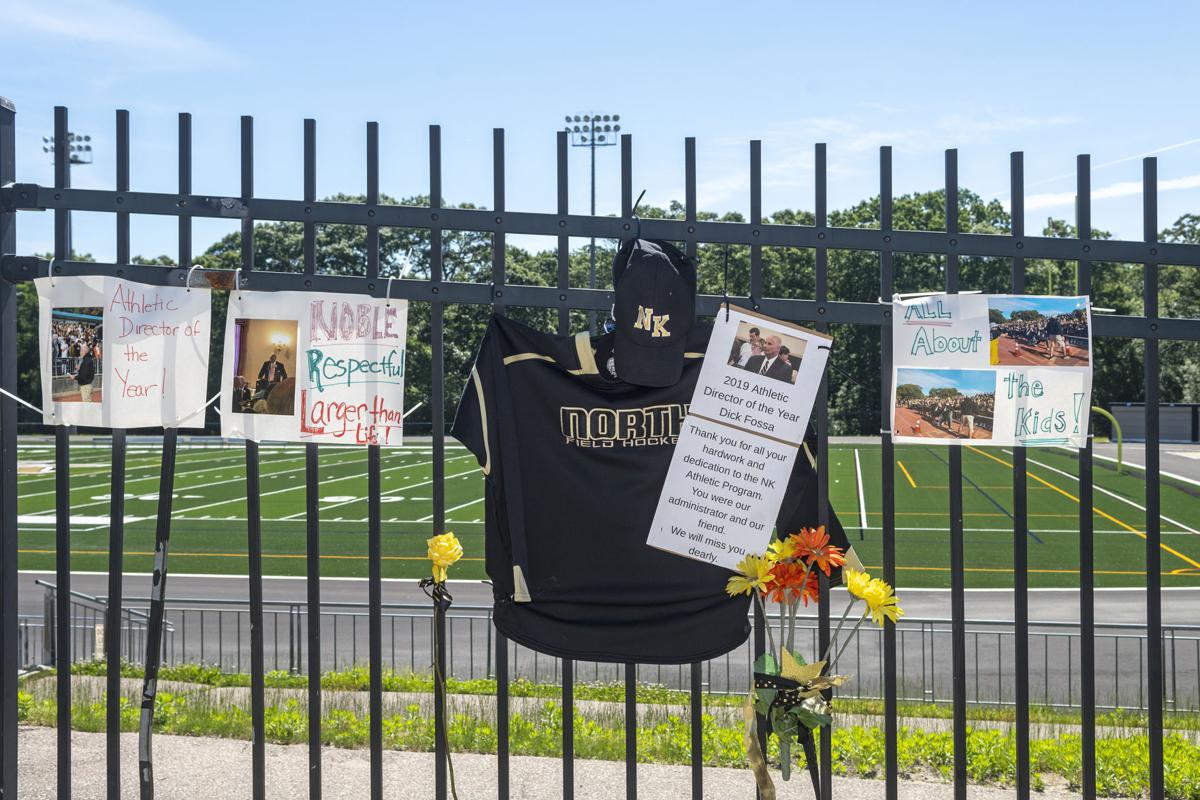 A memorial to Dick Fossa, the North Kingstown High School athletic director who passed away on June 13, has been set up at the school's athletic complex. 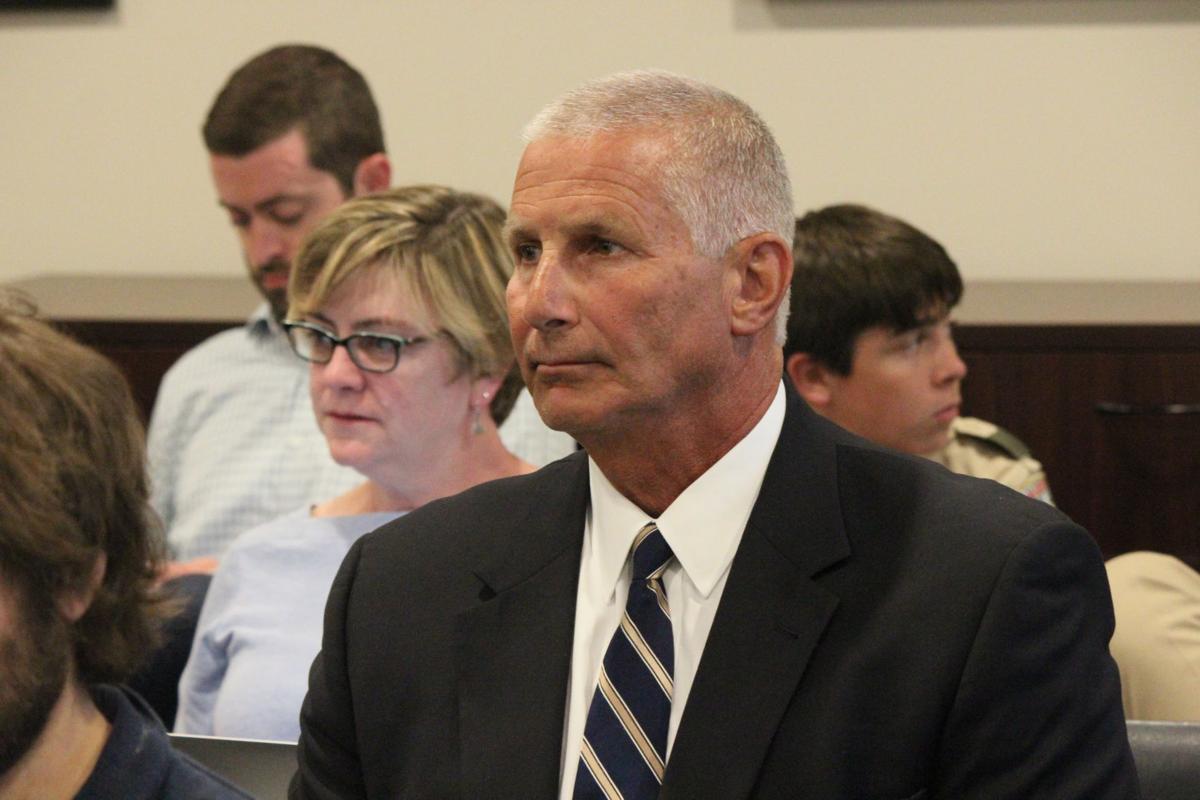 A memorial to Dick Fossa, the North Kingstown High School athletic director who passed away on June 13, has been set up at the school's athletic complex.

Jason Berman learned a lot about life from wind sprints at Narragansett High School football practices and from the guy blowing the whistle.

“When you’re out there running sprints and you feel like you can’t do another one, he was always telling us it’s not an individual sport,” Berman remembered. “You’re running it for your teammate, for the person next to you. So if you didn’t put 100 percent into it, that’s who you would let down. What he really taught was to be there for your teammates. You’re not doing it for yourself.”

Those lessons came from coach Dick Fossa, and they were the same words he lived by. The North Kingstown athletic director and former Narragansett football coach died suddenly on Saturday at the age of 61 from heart complications. As a man who was always there for others, just as he preached to his players, the hole left in his orbit is significant.

“He’s not there for the accolades, though he got some along the way,” said North Kingstown boys basketball coach Aaron Thomas. “He’s there to help the kids have success, and he put his heart and soul into that.”

Fossa is survived by wife Teri and three children, Cameron, Casondra and Corey. His work legacy lives on in the thousands of students he impacted on the football field and beyond, a fact that was evident as the news of his death rippled through the Rhode Island sports community.

“His passion was high school athletics,” wrote North Kingstown Schools Superintendent Phil Auger in delivering the news via social media. “Every part of his work was for the benefit of our student-athletes.”

“We are all heartbroken to hear this news,” wrote Rhode Island Interscholastic League Executive Director Mike Lunney on Twitter. “Dick’s love and passion for all students and colleagues was evident in everything he did.”

His outsized impact matched his larger-than-life presence. Fossa grew up in North Providence, played football and baseball at La Salle Academy, and then embarked on a journey all his own. He joined the Arizona State University football team as a walk-on and was part of the 1977 squad that played in the Fiesta Bowl. After his freshman year, he transferred to Notre Dame, from which he graduated in 1981. Five years later, he attended the Harry Wendlestedt School of Umpiring and began a career in baseball. He spent eight years as an umpire in the minor leagues, eventually making it to the Triple A level.

He began coaching at North Providence High School and also worked with at-risk high school youth. He became the head coach at North Providence in 1995, then took the same position at Narragansett four years later. The Mariners won two championships in his 15 years at the helm. He also served as an assistant baseball coach.

Berman, who was part of a championship and two-runner-up teams with the Mariners, saw Fossa’s impact beyond the wind wind sprints and drawn-up plays.

“Obviously he was a good coach – three out of my four years we made it to the championship,” Berman said. “But what I really remember was that he really taught you about hard work and integrity. Looking back on it, what he was teaching us at the time, it all related to football, but it was more about life and kind of making men out of us.”

He was straight out of football coach central casting, a powerful presence with a booming voice. Berman recalled an early celebration in a playoff game that Fossa single-handedly put the clamps on.

“I was around 300 pounds and he basically picked me up and threw me on to the sidelines,” Berman said.

Andrew Pezzelli remembers the tough side, but also the deep community connections behind it. He played for Fossa at Narragansett. Leaving practice to meet his dad in the parking lot one day, Pezzelli heard Fossa yell out, “Hey Pezz!” Both Pezzelli and his father turned around. That had also been his father’s nickname when he was growing up with Fossa in North Providence.

“That always stuck with me. It was a funny father-son moment, but it reinforces for me now how connected coach was,” Pezzelli said. “He impacted many lives and his enthusiasm and passion will be sorely missed.”

Fossa became Narragansett’s athletic director in 2014, bringing his philosophies with him to the administrative realm. It was still about the kids, but also about setting up their mentors for success.

“He made sure we had everything we needed to have a successful season,” said Narragansett boys basketball coach Kyle Bodington. “He was a mentor, a boss and a great friend. He really helped me grow and mature as a coach. He gave me my first opportunity to coach in high school and I’m going to miss him, truly.”

“He was just such a class act,” Blessing said. “As I took over the football program, he was kind of walking out the door. He could have put Narragansett in his rearview mirror but he didn’t. He was there for any questions I had about the football program and for support.”

Though he was new to the athletic director’s role, it was a natural fit.

“Just a down-to-earth good guy,” said South Kingstown athletic director Terry Lynch. “Cared about kids. Cared about a lot of things. He always handled himself in a first-class manner.”

As North Kingstown became his new home, his fingerprints quickly left a mark on the school’s athletic program, which endures as one of the best in the state.

“He was phenomenal to work with,” Thomas said. “He was a great guy. You saw how much time and effort he put into things and it made you want to do more.”

For all the big success Fossa oversaw – championships in football, basketball, field hockey, volleyball – the small things added up, too. Fossa handled announcing duties for many sports, including unified basketball and volleyball. He put together programs for every game. And the old-school football coach learned how to use Twitter as a means to share news and information about the athletic department.

It was all done with an eye on making things special for students, and that quest never stopped. Fossa was helping set up North Kingstown High School’s modified graduation ceremony on Saturday, which had students coming through one at a time in the gym and aired online. From the hospital, Fossa was texting Thomas about making sure the live stream was working.

“He’s sitting in a hospital bed and he’s more concerned with everybody else,” Thomas said. “That’s the character and integrity that he had.”