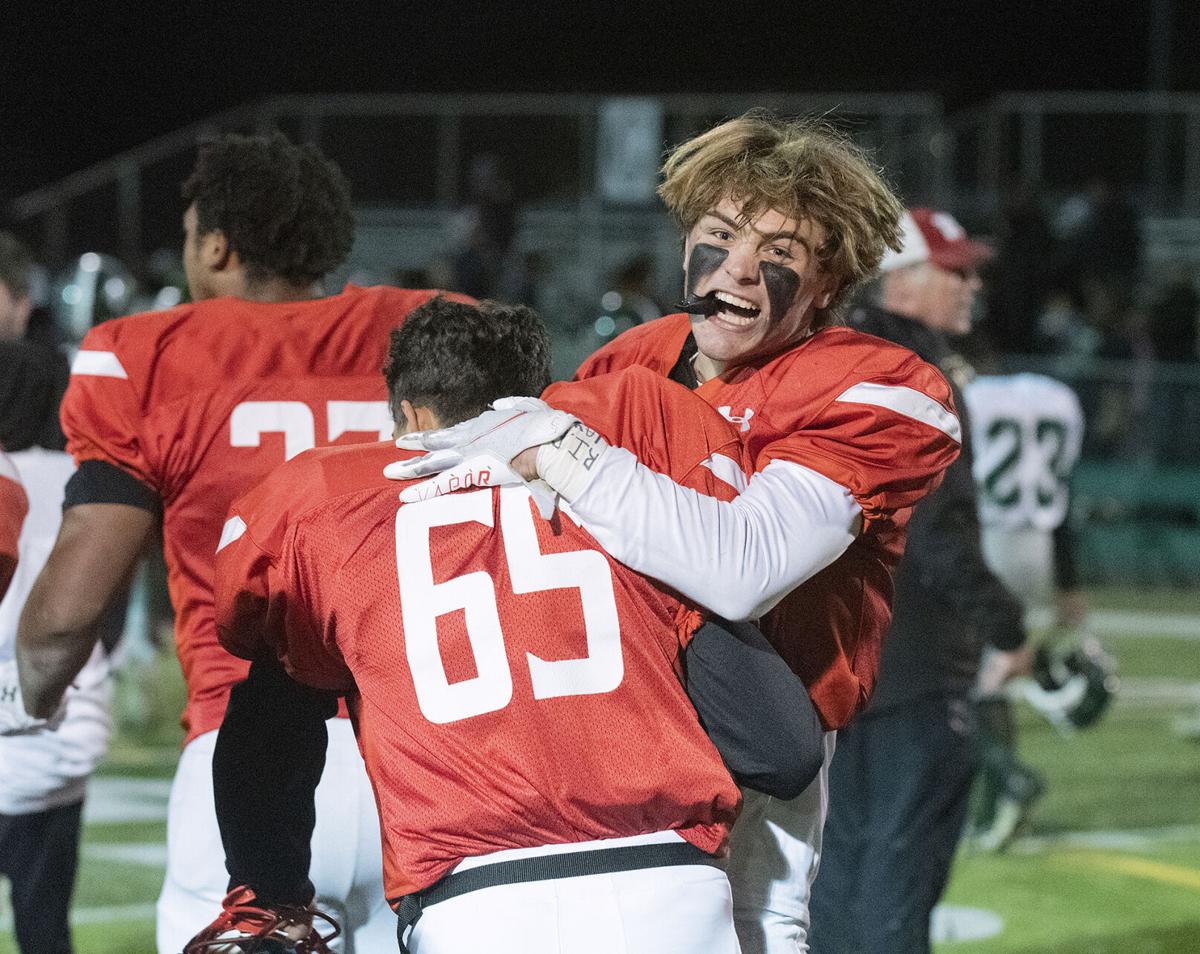 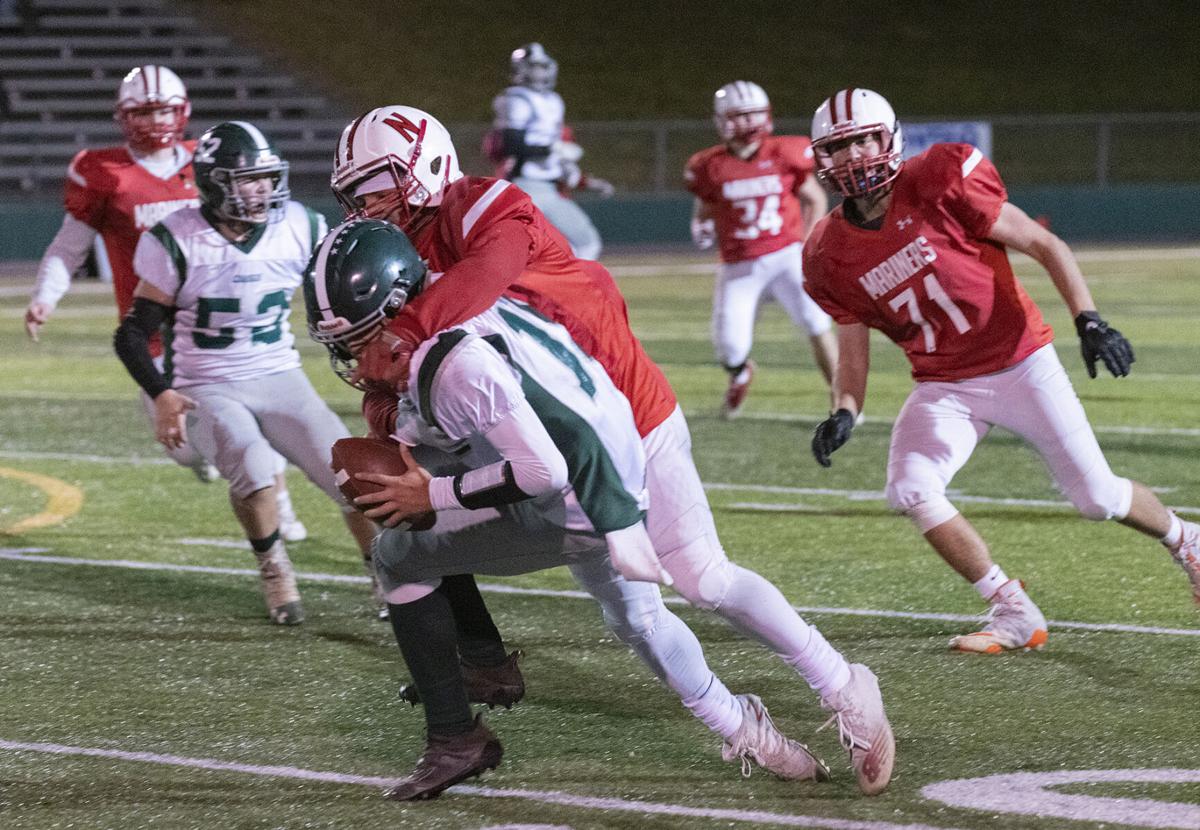 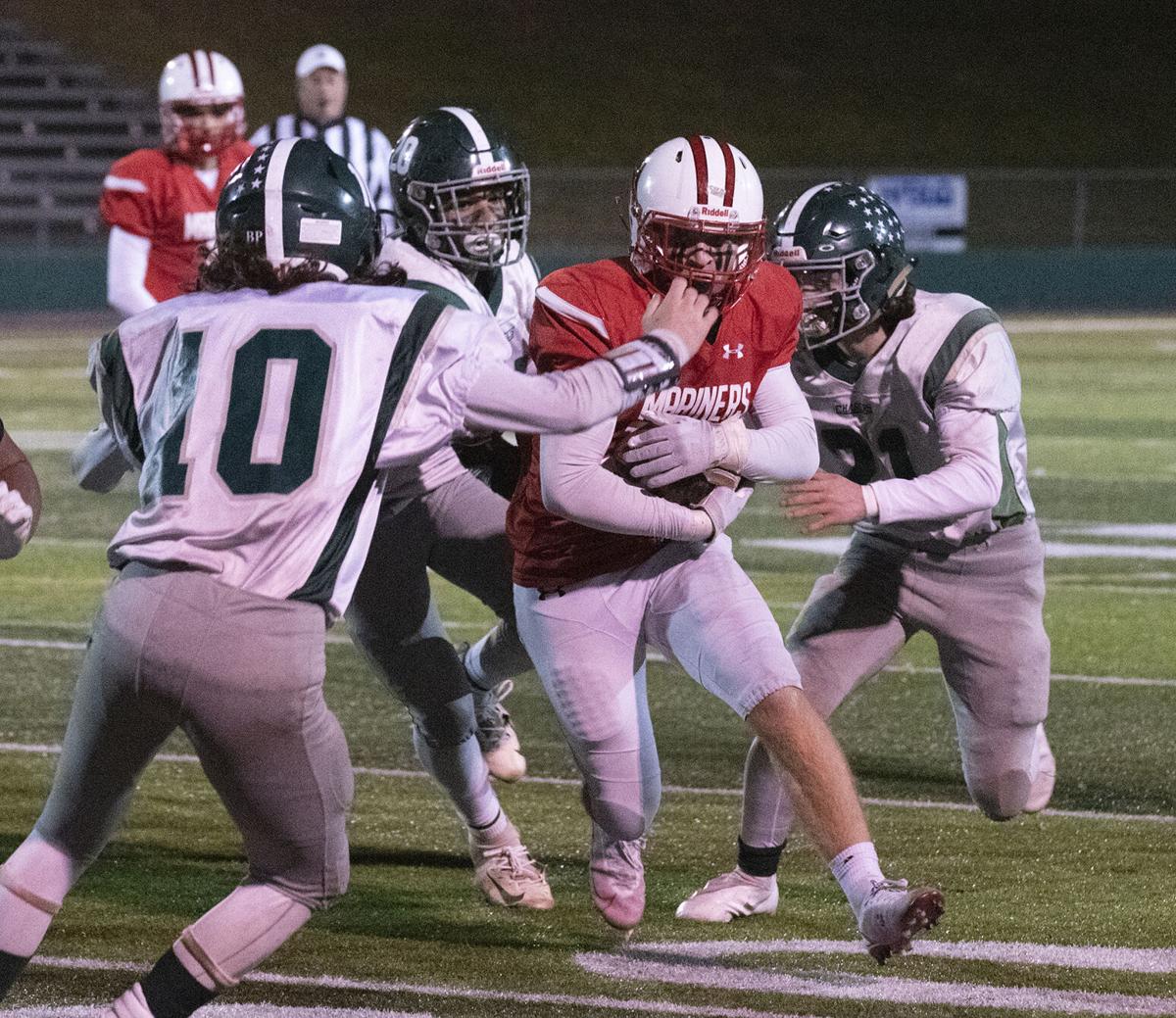 CRANSTON – The competition would be better. The season would be longer. The target would be bigger.

And through it all, the Narragansett High School football team was better.

After their Division IV title in the spring season, the Mariners moved up to Division III and raised their game to a higher level, too. They rolled through an undefeated league season and capped off their ride with a second straight championship, pulling away from Chariho for a 51-33 victory in the D-III Super Bowl Friday night at Cranston Stadium.

“We’ve been working for this ever since we were freshmen,” senior Colin Flynn said. “It was a rough start. Our freshman and sophomore year, we took our lumps. Now, to be at the top and build the tradition at Narragansett – it’s just so special. It’s everything we could have hoped for.”

The championship is the seventh football title in Narragansett history. This is the third time the program has won two in a row, with the Mariners also doing it in 1986-87 and 1998-99. In both those cases, the team won both titles in the same division; this repeat came with a twist. As it turned out, the long-awaited D-IV title in the spring – the school’s first since 2003 – really was just the beginning. The Mariners paired talent and experience with a powerful dose of confidence, and supported it with the same “We, not me,” motto that has fueled every step of their rise.

“We’ve been talking about it since freshman year,” senior Tyler Poirier said. “We wanted to go back to back to back, starting when we were sophomores. Things didn’t work out. But we knew we wanted to win the next two instead. We worked hard every day. The seniors, we brought this team back from where it was. We had a tough freshman year. We won in the end. The job wasn’t finished.”

In an all-South County final, the Mariners faced a Chariho team that was riding high after an upset of Pilgrim in the semifinals. And the third-seeded Chargers were feeling even better when they returned the opening kickoff of Friday’s game for a touchdown. The Mariners pushed back hard, but left the door open and the Chargers made it a five-point game at halftime. As always, though, Narragansett’s powerful offense and tough defense gave it a large margin for error. They controlled the second half, outscoring the Chargers 19-6 to finish off the win.

“Chariho is an amazing team,” Flynn said. “They never quit. It would have been easy for them to lay down multiple times but they didn’t. It was a South County Super Bowl, showing everybody what South County is made of. We fought through and we were able to persevere.”

Chariho’s opening salvo was no small thing. Colin Fitts scooped up an onside kick attempt, picked his way through the coverage and rambled down the left sideline for the score. The Chargers had played Narragansett tough in the regular season, and now they had been spotted a lead.

“We all knew they were going to come out strong,” senior Anthony DiCicco said. “It felt good to come out and recover and just keep going.”

And did they ever.

The Mariners raced down the field in five plays, with Phil Theroux finding Harry Lague from 33 yards out for a score. That was the beginning of a streak of five straight touchdown drives by the Mariners. Chariho didn’t get its first defensive stop until the three-minute mark of the second quarter.

Theroux tossed three more touchdown passes in the hot streak, one to Lague and two to Tyler Poirier. Reider Fry added a rushing touchdown as the Mariners went up 32-13.

“We wanted to come out fast,” Theroux said. “Usually, in the first quarter, we don’t score a lot. We wanted to work hard and score right away.”

The Mariners played a little too loose in the final minutes of the second quarter. When Chariho got its first stop, the Mariners tried a fake punt at their own 34-yard line and failed to convert. The Chargers scored five plays later on a touchdown pass from Zoot Boschwitz to Caleb Maggs.

On the ensuing kickoff the Mariners tried a reverse that went nowhere, then fumbled at the end of the play. Chariho recovered with 46 seconds left and rolled into the end zone again, Boschwitz scoring from 2 yards out with 14 seconds left.

“Got a hand it to Nick Russo and Chariho. Those kids are tough. They’ve certainly been one of the more physical teams we’ve come up against,” Narragansett coach Matt Blessing said. “We were trying to do too much. We got a little bit our of our rhythm. You’ve got to be an assignment football player and do your job. We’ve done that all year long. We just needed to trust in the system.”

The Mariners tightened their grip after halftime, with the defense keeping Chariho off the board until the waning moments of the fourth quarter. A big defensive play also helped the Mariners add to their lead, as DiCicco scooped up a lateral that hit the ground and ran it back for a touchdown.

“I saw the ball go backwards. He stopped going for it and I just picked it up and ran,” DiCicco said. “It felt great to punch it in for us.”

Theroux connected with Poirier in the end zone for a third time, then put the exclamation point on the victory with his sixth touchdown pass of the night, a 44-yard bomb to Zach Bianco in the fourth quarter.

Theroux was spectacular in the win, completing 12 of 16 passes for 180 yards and the six touchdowns.

“Crazy. He’s stellar. He puts the ball where you need it, every time,” Poirier said. “He’s smart. He rarely ever messes up. Great quarterback coming into the program the last two years. He fits in well.”

All three of Poirier’s catches went for touchdowns. The ground game handled much of the offense before the red zone, with Fry totaling 133 yards on 20 carries and Mekhi Wilson adding 93 yards on 15 carries.

“The talent, the work ethic – everything kind of came together for us,” Flynn said.

One hundred ninety-five days after their title in the spring, the Mariners did it again.

“It’s absolutely amazing,” DiCicco said. “We’ve been together for four years. We struggled our freshman year. It feels amazing to be here twice in a row and just win it.”