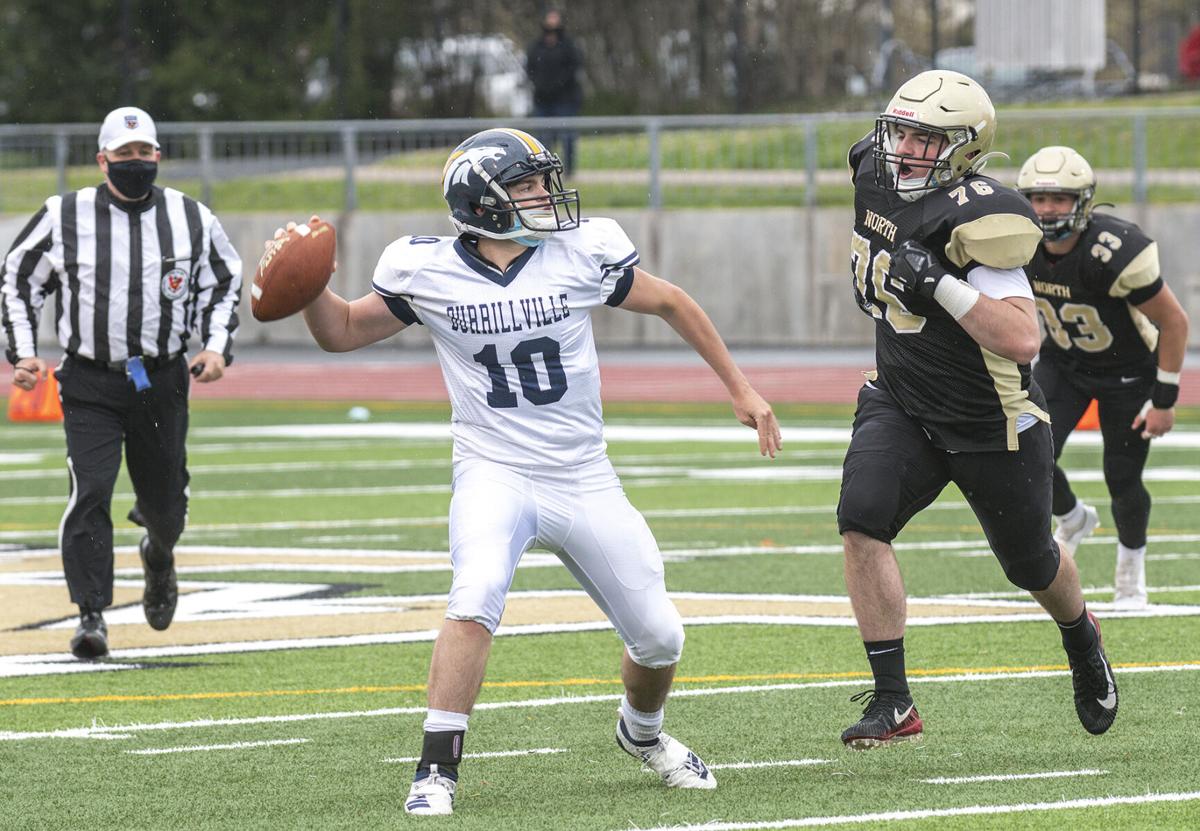 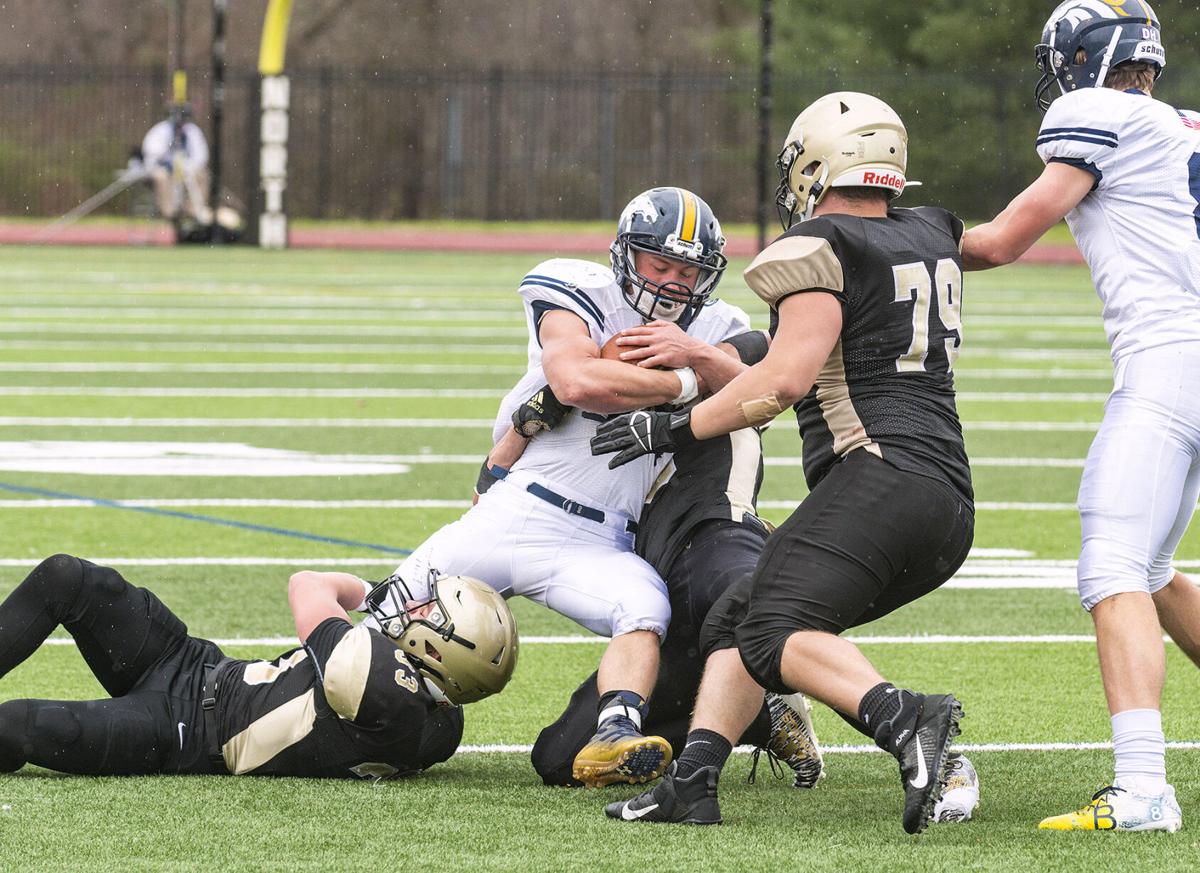 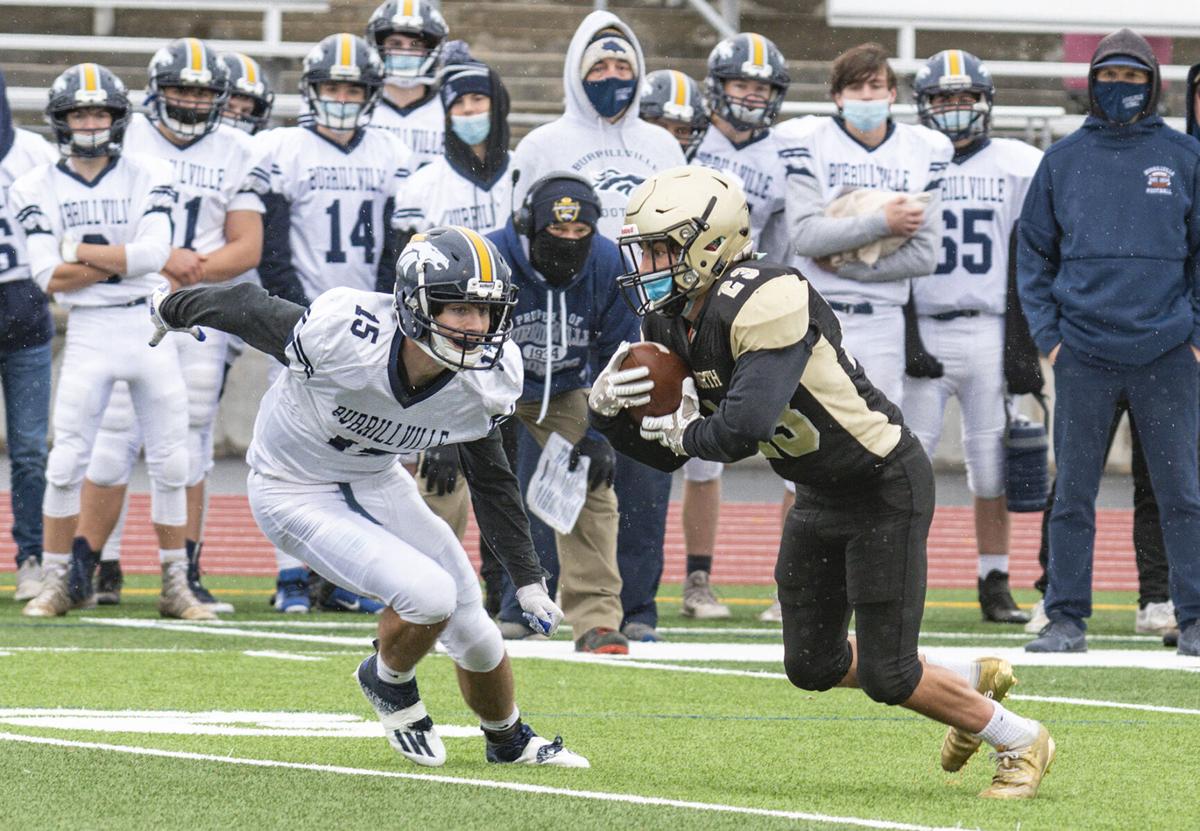 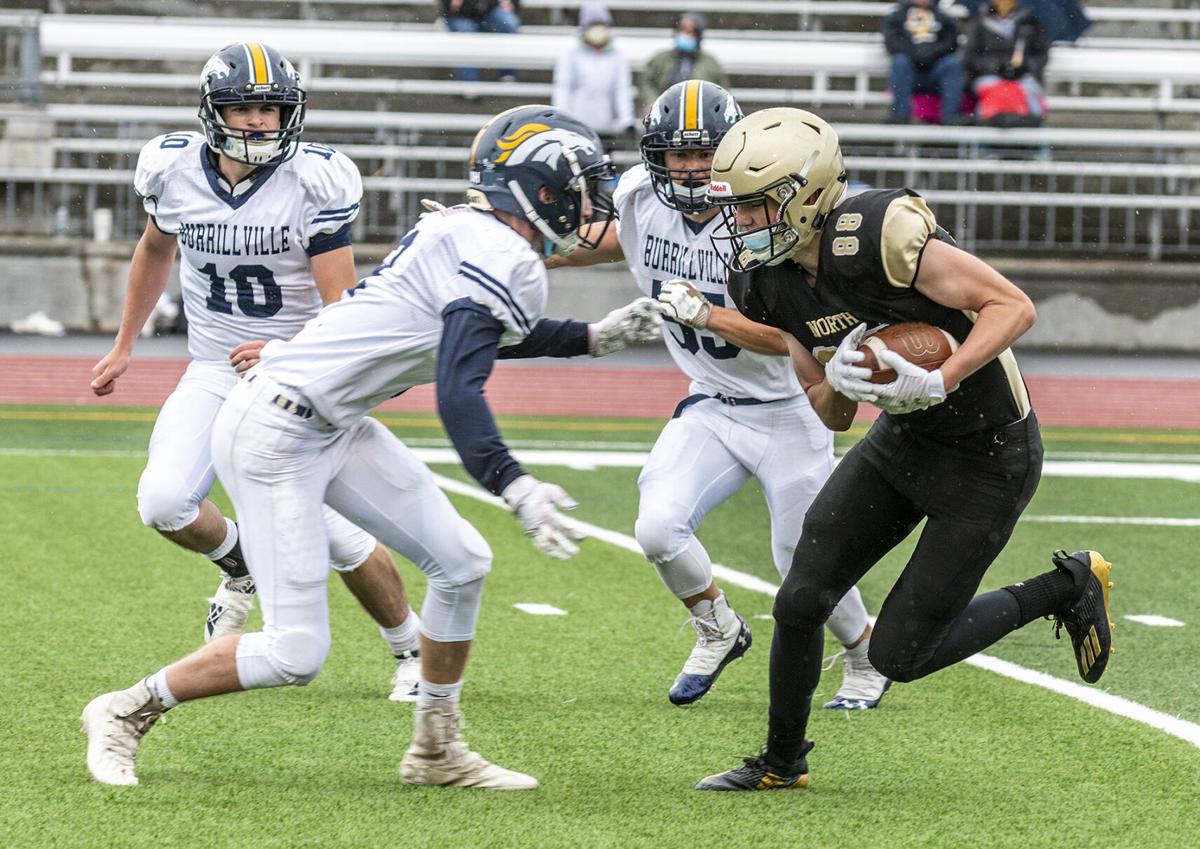 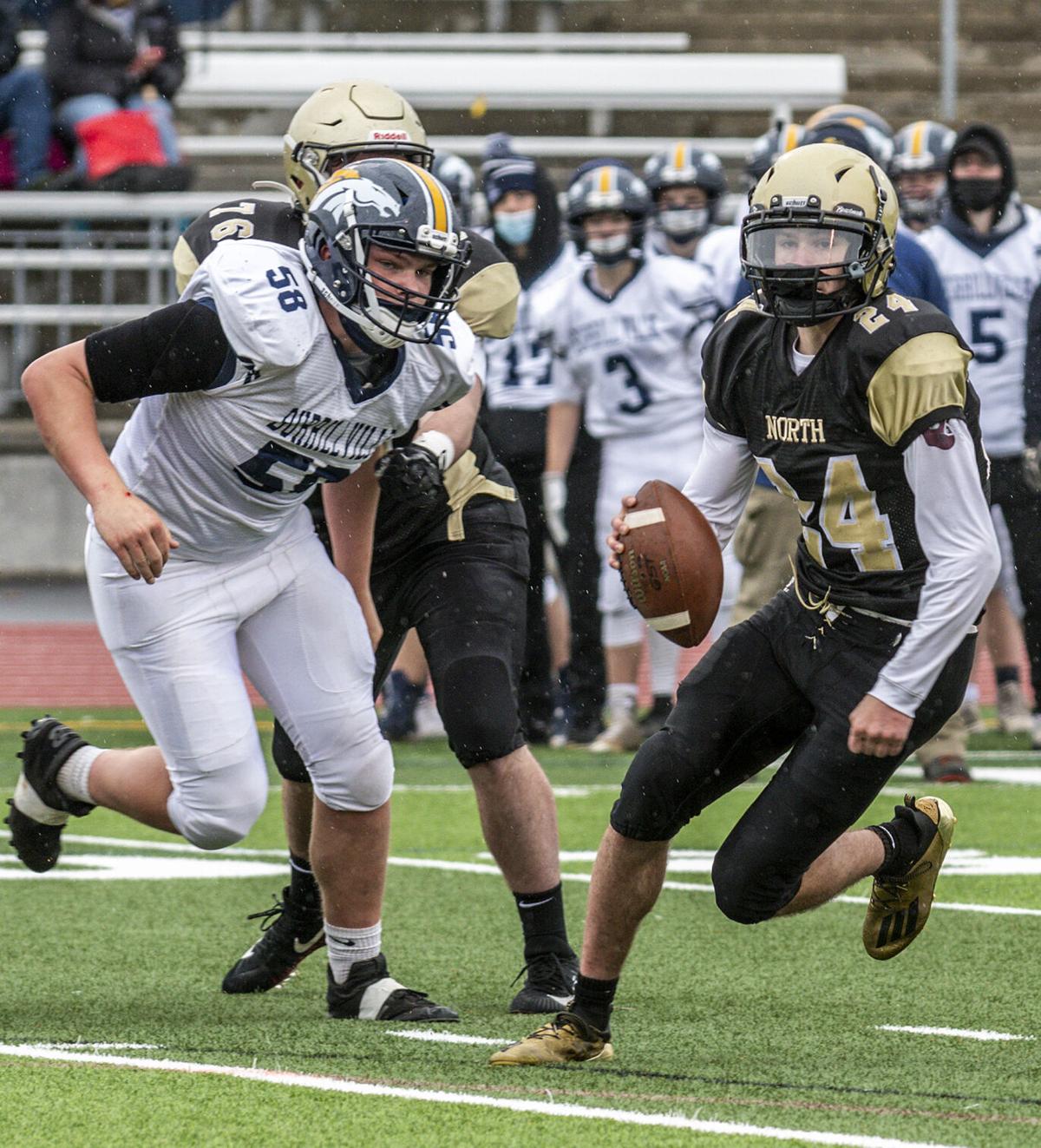 NORTH KINGSTOWN — The defense has arrived.

On the wrong end of shootouts with Hendricken and La Salle the past two weeks, the North Kingstown High School football team rode a welcome defensive resurgence to a 20-0 win over Burrillville on Saturday afternoon at the Anthony C. Perry Athletic Complex.

The shutout snaps the Skippers’ two-game slide and gives them a significant dose of confidence for the upcoming postseason.

“I think it’s just a tribute to our resiliency and our ability to come back from adversity and just really stay together,” senior linebacker Jaiden Tucker said. “I’m just proud of all my guys. I think we came back and made a really big statement today on defense.”

The Skippers had sizeable leads against both Hendricken and La Salle but couldn’t hold them. The Hawks rallied from a 17-0 deficit for a 30-24 win, while La Salle came back from a 21-6 hole in a 46-27 win.

While not at the same level of the perennial powerhouses, Burrillville has been impressive in its move to Division I, boasting shutout wins over East Providence and Shea. The Broncos’ powerful running attack profiled as a potential trouble spot for North Kingstown, especially after La Salle chewed up more than 300 yards rushing the week before.

Instead, the Skippers consistently clamped down on the running game, limited big plays and forced three turnovers, while protecting a slim 7-0 lead for most of the game.

It was a rare low-scoring affair for the high-powered Skippers that turned out just fine.

“Super proud of the defense,” head coach Fran Dempsey said. “They worked hard. The last two games we saw Burrillville play on film, they just ran people over. They’re a really good team. Thinking about our last two games, our defense was a little soft. We came out today, took the challenge on, had good run defense, good pass defense and kind of bounced back.”

Freshman quarterback Brayden Rogers started in place of Donovan Carr, who missed a second straight game due to COVID protocol. Sophomore Eddie Buehler, who took the bulk of the snaps against La Salle, is battling a back injury, and the Skippers wanted to push their running game with Rogers, who is more of a dual-threat. He led an early scoring drive, finishing it with a fourth-down pass to Ben Brickle for a 10-yard touchdown. Max Rome’s extra point made it a 7-0 game.

It was all about the defense from there. Burillville came up empty on each of its five first-half possessions. The most promising of them ended with an interception in the end zone by Brickle. T.J. Gormley also had an interception just before halftime.

“The past few weeks, we’ve had some trouble making some stops in the second half,” Brickle said. “The fact that we shut them out, the confidence for the rest of the season is definitely up there.”

It remained a 7-0 game through the entirety of the third quarter. North Kingstown forced a three-and-out on Burrillville’s first possession, then recovered a fumble on the Broncos’ second drive.

“We kind of just stayed with our base stuff, the stuff we know really well and practice every day,” Tucker said. “We just stayed resilient.”

The Skippers also controlled the clock a little more than they usually do. Brickle rushed for 50 yards and Tucker picked up 26 yards to lead a rushing attack that had been an afterthought in the first three games of the season. Rogers ran for 43 yards from the quarterback spot.

“Week one, the run game wasn’t really there and it was kind of sad seeing it go,” Brickle said. “I kind of accepted that we weren’t going to be doing it. But it’s a big thing to have a good run game. It opens up the pass game. Seeing holes open was awesome.”

The Skippers finally got some breathing room in the fourth quarter. Rogers found Drew Schwab on third-and-goal for a 10-yard score. Tucker then broke a 25-yard touchdown run – his first varsity score – to finish off the victory.

“It was great, especially on senior night,” Tucker said. “It was great having all my teammates running over. It was definitely a memorable moment.”

Tucker and 17 other seniors were honored in a halftime ceremony. It’s a group that wasn’t sure what the future held when the fall season was postponed.

“It’s been a tough year, not knowing if we would have a season,” Dempsey said. “Those guys were great all summer, all fall. We didn’t see a lot of guys who were half-in. They were all in the entire time, working hard, bringing the leadership we needed. So happy for those guys to get a chance to come out here and compete in their senior year.”

The Skippers have one more regular season game on Friday at Portsmouth, and they’ll head into it feeling as good as they have all season.

“The win today is definitely big for how we feel,” Brickle said. “I think we’re confident as ever. We just need to keep preparing and go out there and compete like usual.”