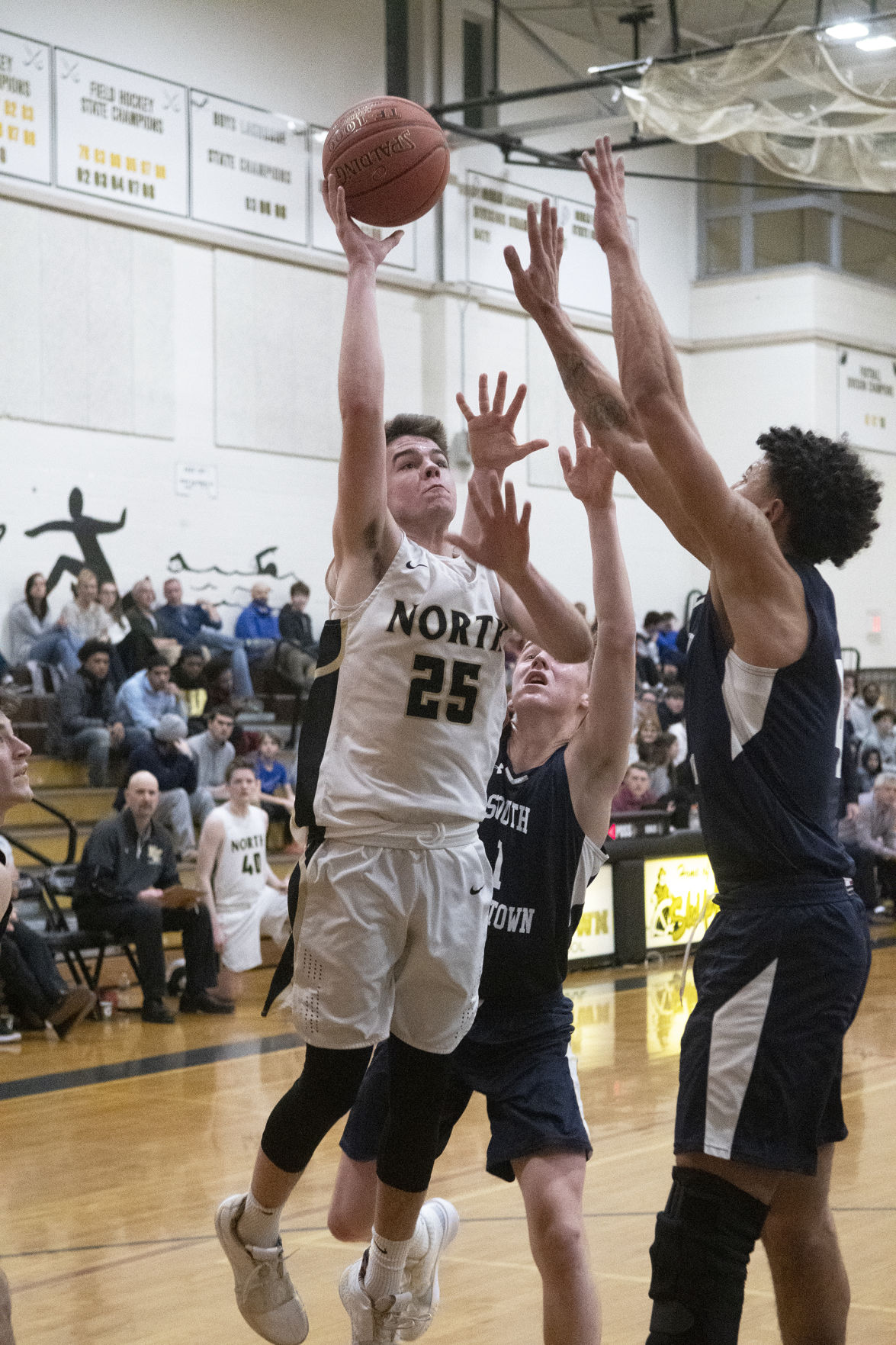 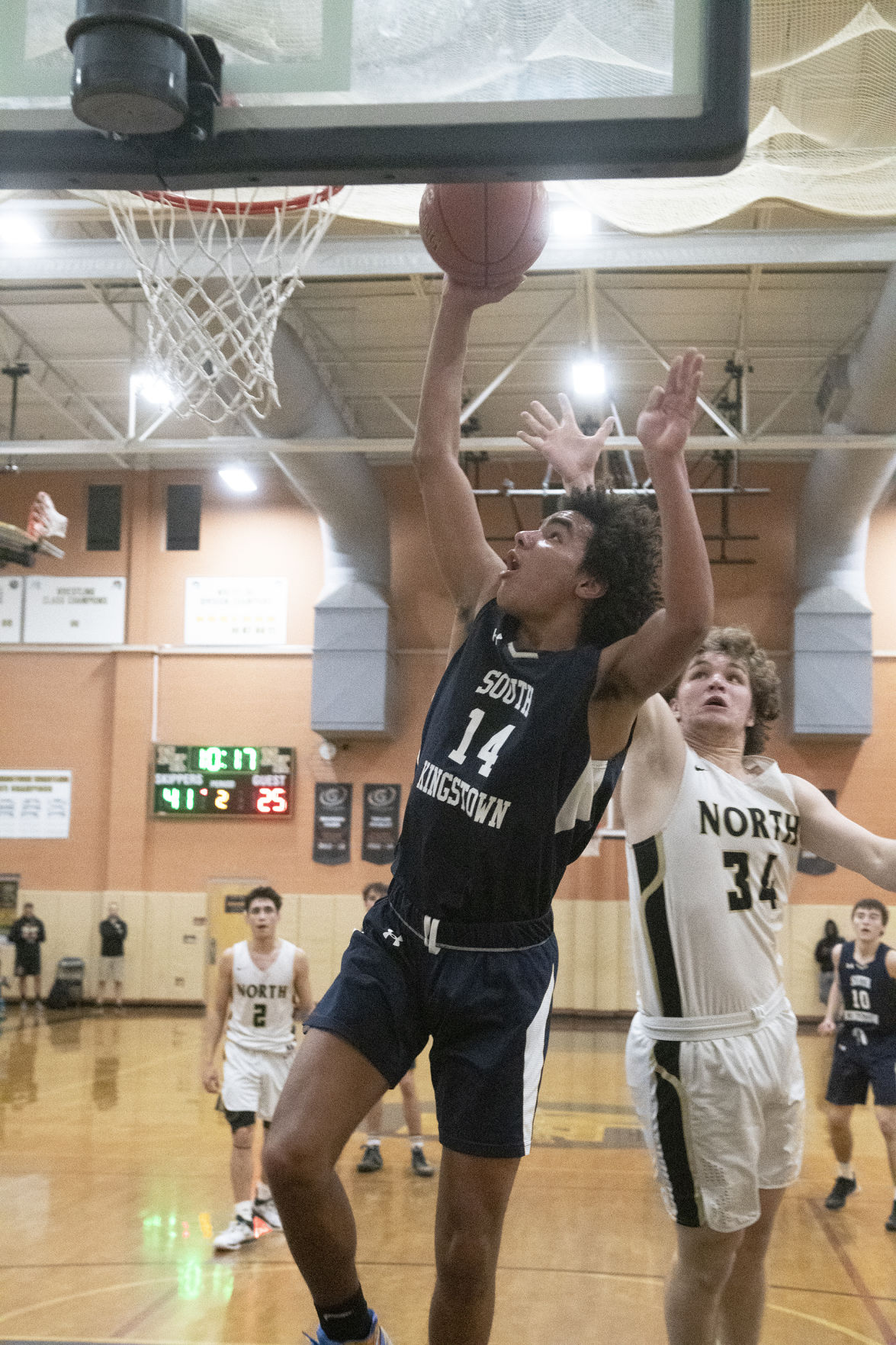 NORTH KINGSTOWN — The first half of Friday’s boys basketball game featured the best defense North Kingstown has played all season and the most mistake-prone attack South Kingstown has had.

North Kingstown didn’t allow a field goal for the first 6:45 of the game and built a 24-point halftime cushion. The Rebels worked back to within 10 in the second half before the Skippers pulled away for a 66-43 win.

“That’s the best defense we’ve played in a half all year,” North Kingstown head coach Aaron Thomas said. “We were intense. We started to show it a little bit the other night against Cumberland, and it’s getting better. But like I said to them, games are 32 minutes and you’ve got to play the whole thing.”

The Rebels were pleased with their comeback effort, but not with the fact it was necessary.

“We just played so poorly in the first half,” South Kingstown head coach Roland Fiore said. “Certainly hats off to North Kingstown. But I think we showed that we’re capable of playing toe-to-toe with them. We just made too many mistakes.”

The victory was the sixth in a row for North Kingstown, who pushed its league record to 12-1. Clay Brochu led the Skippers with 25 points, bumping him over 1,200 for his career. He is only the second player in Thomas’ longtime tenure to reach 1,200 and is primed to soon be the program’s top scorer of the last 20-plus years, since Thomas took over.

The Rebels fell to 5-8 in league play as their tour of the top of the standings continued. In the last two weeks, South Kingstown has faced Hendricken, La Salle, North Kingstown and East Providence, who own four of the five best records in Division I.

The opening minutes of Friday’s game had the Skippers looking like the best of those contenders. Brochu scored the first five points of the game and John Quainoo followed with four straight as North Kingstown raced to a 9-0 lead. Two free throws by Lavell Shepard got the Rebels on the board with 12:18 left, but their field goal drought continued, as did North Kingstown’s run. Brochu, Quainoo, Nick Sacchetti and Shawn Murphy scored for an 8-0 run as the lead grew to 17-2.

At that point, South Kingstown was 0-of-3 from the field with eight turnovers.

“We’ve been really working in practice on defense,” Thomas said. “We did a really good job tonight of having active hands, getting our hands on loose balls, transitioning and running. I thought even our offensive sets were very good.”

Justin Brown’s drive for a three-point play gave South Kingstown its first field goal with 9:15 left in the first half. The Skippers answered back with another string of eight straight points, four each by Murphy and Caleb Wagner, that made it 25-5. Quainoo and Brochu each hit 3-pointers down the stretch of the first half, Brochu’s coming in the final seconds, for a 39-15 halftime lead.

“I thought North Kingstown shot the ball well in the first half, but our mistakes doomed us,” Fiore said.

The Rebels addressed their biggest issue in the second half, committing only three turnovers after the break. Along with better execution, strong defense of their own and a North Kingstown unit that didn’t have the same juice, that allowed the Rebels to fight back into the game. Shepard scored 17 second-half points and the Rebels used 9-0 and 12-0 runs to make it 49-39 with 5:01 remaining.

“The second half, I even said to them in the locker room, ‘This might be on me guys.’ Our shooting legs were tired. If that’s the case, I’ve got to do a better job of subbing,” Thomas said. “You know South is not going to give up. NK-SK, no matter what the sport is, the other team is not going to give up. Credit to them. They came back, they fought hard, and I thought we fell asleep on defense a lot. We can’t lose that focus now as we build toward the playoff run.”

The Skippers made a final push to keep the Rebels at bay, going on a 17-4 run after the Rebels had made it a 10-point game. Murphy, Sacchetti and Brochu sparked it with six straight points.

Along with Brochu’s big night, Quainoo finished with 16 points and Murphy tallied 10.

Shepard led the Rebels with 19 points and Myles Tyler-Robinson scored 16. The big game for Shepard, a sophomore, came after he hit the game-winning shot against Cranston East earlier in the week.

South Kingstown returned to action Monday against East Providence and lost 65-57. North Kingstown kept its win streak alive Monday with a victory over St. Raphael. A big matchup with La Salle loomed on Wednesday, with results unavailable at press time.