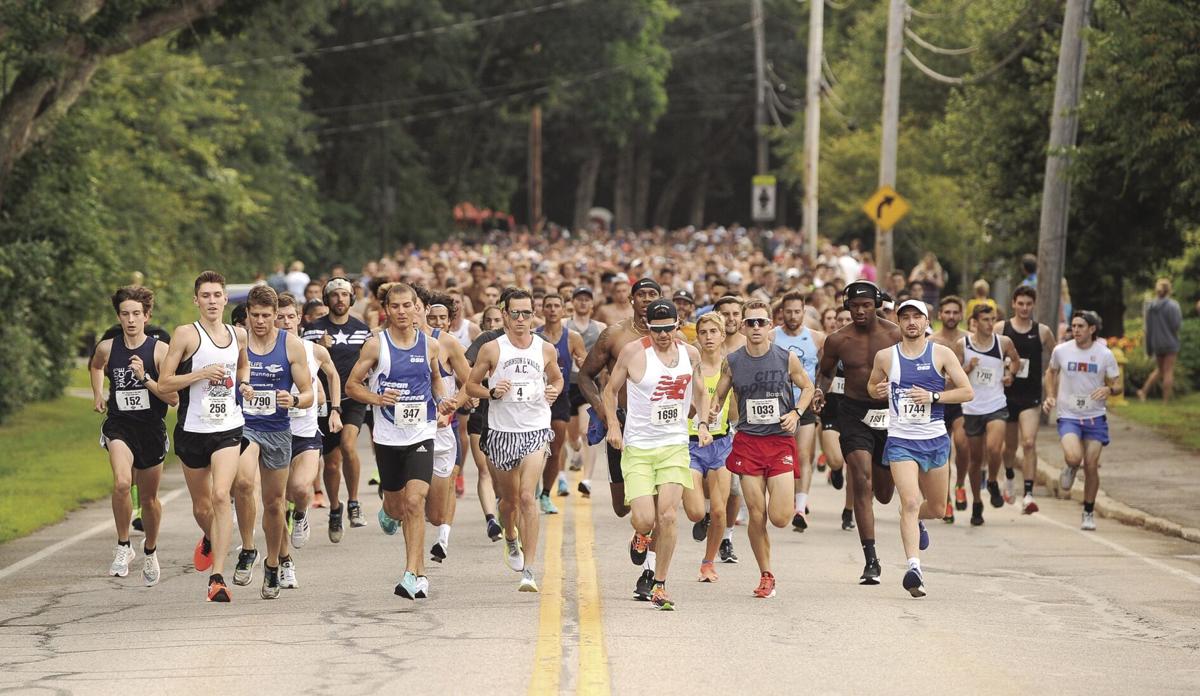 Runners break off the starting line in the Blessing of the Fleet Road Race. 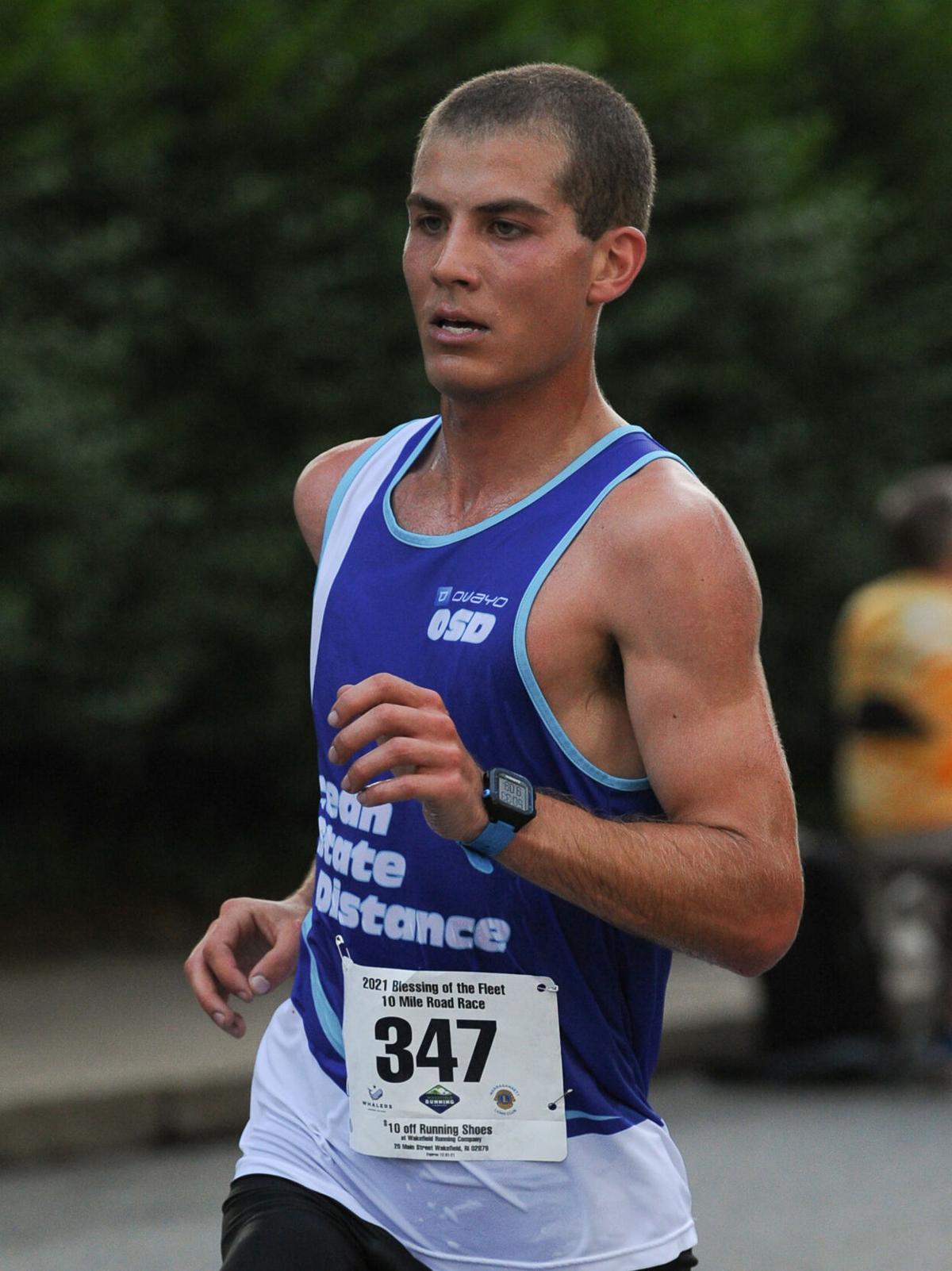 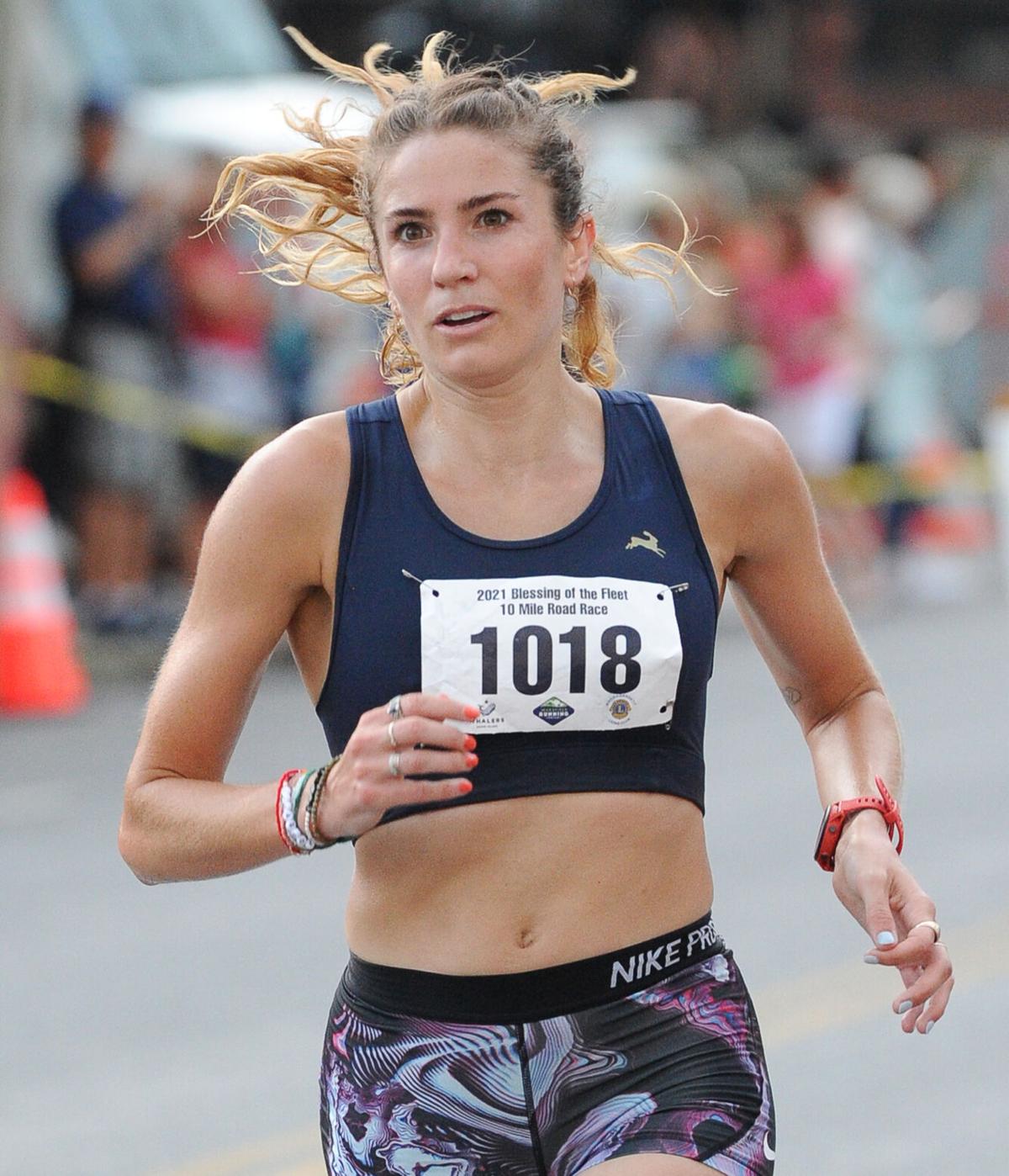 Jeanne Mack, of Brooklyn, New York, was the top female finisher during Friday evening's Blessing of the Fleet Road Race in Narragansett. She finished 20th overall with a time of 56:21.

Runners break off the starting line in the Blessing of the Fleet Road Race.

Jeanne Mack, of Brooklyn, New York, was the top female finisher during Friday evening's Blessing of the Fleet Road Race in Narragansett. She finished 20th overall with a time of 56:21.

NARRAGANSETT — Eight miles at a fast pace were catching up to him, but Nick Celico couldn’t help but trade a wince for a smile as he ran past the parties on Avice Street.

The Blessing of the Fleet Road Race was back, and Celico was going to win it.

The Westerly native took first place in the 49th edition of the Narragansett race in a time of 51:12 on Friday night. Like all the runners and walkers in the field – plus the party-goers along the route – he was thrilled that the tradition returned this summer after a one-year hiatus due to the pandemic.

“This is the craziest racing atmosphere,” Celico said. “Going by mile nine, there’s a good group on Avice. They make so much noise. They literally made me smile. And I’m hurting like crazy at that point. And I’m smiling. It’s like, ‘This is awesome. This is what people dream of.’”

Click here for a photo gallery of the race

Nearly 2,000 people registered for the return of the in-person race. There was a so-called virtual race last year to keep the spirit of the race and the fundraising efforts of the Narragansett Lions Club alive during the pandemic. The club initially announced that this year’s race would also be virtual, but made the decision in May to bring back the in-person version. Runners signed up in droves.

Celico was one of them. The Bishop Hendricken and University of Rhode Island grad finished second in the 2017 Blessing of the Fleet.

“We were panicking a little bit because the website said virtual for the longest time,” Celico said. “I got a text from one of my buddies saying it was back on.”

Celico graduated from the University of Rhode Island in 2019 and has stayed sharp as a runner even without college competition. As the road race circuit has ramped back up this spring and summer, Celico has been running well. He won the Arnold Mills Road Race in Cumberland on July 5, which set the stage for the Blessing of the Fleet.

“After Arnold Mills, I knew I might have a shot at this,” Celico said.

A lead pack emerged before the turn onto Ocean Road and the second mile marker. A group of seven – which included Doyle and another former champ, Zachary Hoagland – remained together past Scarborough State Beach. Celico and Tierney, another Hendricken grad, broke away around the five-mile mark on Route 108.

“When we hit 108, it goes up and it can really hurt people,” Celico said. “If you’re in the lead, people burn out. But we really picked it up and started hammering. That set the rhythm. Aidan Tierney was with me and was just doing a workout. He got me through eight miles and then was like, ‘Ok, I’m going to ease back.’ He really helped me a lot. So thank you to him.”

When Tierney dropped off, it left Celico alone, and he stayed there for the final two-plus miles.

Celico finished in 51 minutes, 12 seconds, the best winning time in the race in a number of years. The unusually cool weather helped make it fast, and Celico took full advantage.

“I did some math after Arnold Mills and thought maybe I could break 52,” he said. “Today was perfect conditions. You couldn’t ask for anything better. The sky was the limit today. I just wanted to have fun.”

Mack has been taking the same approach since returning to the racing scene after not running much during the pandemic. She’s planning to compete in a variety of races over the next few months and kicked it off with a return to the top spot at one of her favorite events. Mack was also the champion in 2017.

“I haven’t raced in a really long time, so I think I had a lot of built up enthusiasm,” said Mack, who ran at Harvard after her 2007 state cross country title. “It was fun. There were so many people at the start line. It was a weird feeling of like, ‘Oh my gosh, I haven’t been this close to this many people in a long time.’ But it was really fun. It was great to see all the people out cheering, too. It’s such a cool race. I love this race.”

Mack’s husband paced her for much of the race. The stretch run became a battle with another former champ, Annmarie Tuxbury, who won in 2018 and 2019.

“I kind of saw Annmarie Tuxbury up in front of me around mile six or seven,” Mack said. “I slowly tried to work my way up. Around mile nine, I tried to kick and I was for sure worried that I went too soon. She definitely came with me at first, but I just tried to stay with it.”

Tuxbury took second among female finishers, about 15 seconds behind Mack.

Both Tuxbury and Doyle had won two straight titles. Doyle was in the mix most of the way and made a bit of a move in mile seven, but he knew coming into the race that it would be an uphill battle. An assistant coach at Davidson College in North Carolina, Doyle is engaged to be married and had a busy school year while coaching amid COVID protocols.

If he had to pass the torch, he was glad it went to Celico. Doyle also has a connection with Riley, the second-place finisher, who is his sister’s boyfriend.

“As life becomes more important, I don’t think I run enough,” he said with a laugh. “But it’s always good to come back. I’m glad to see Nick win – Hendricken kid and he works so hard. John is my sister’s boyfriend. He’s a great kid. I’m going to get some crap for that, though.”

With the No. 1 bib and the running gear that his father made famous, Doyle has become the latest Blessing of the Fleet celebrity, like seven-time champ Matt Pelletier before him. It’s always good to be back.

“I almost feel bad – I don’t even live here but people are yelling my name. I appreciate that. I wish I could be faster for them,” Doyle said. “But it was a lot of fun. I sent a Facebook message to the Lions Club account a few months ago just saying, ‘Please have it. People want it.’ As long as people are being careful, road races have been safe. It’s really special to be back. It’s always one of the best days of the year.”

Among area competitors, Joey Confessore was the top finisher from North Kingstown in 38th, James Kiernan of Narragansett was 43rd and Chris Garvin of South Kingstown was 47th.