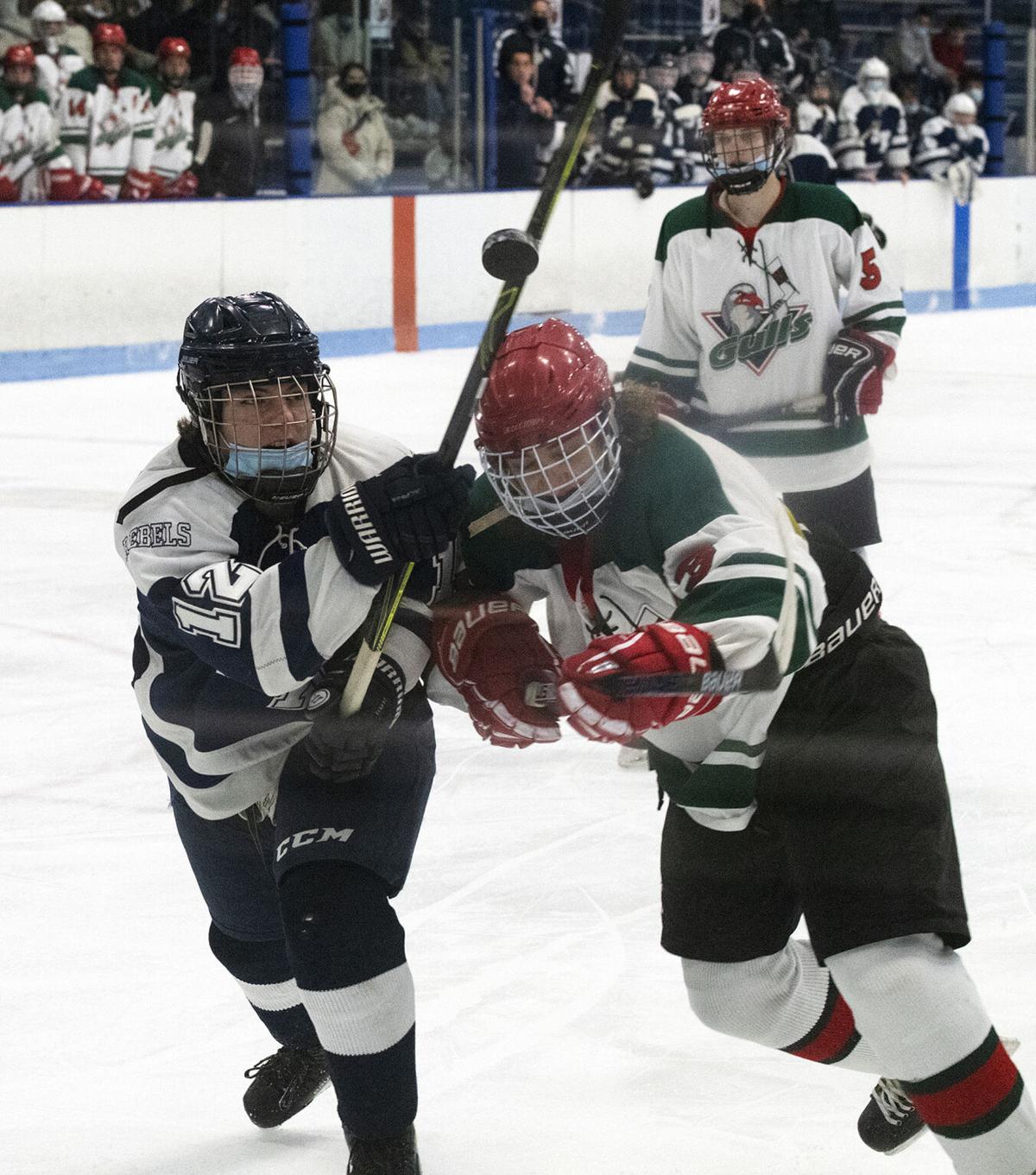 SOUTH KINGSTOWN — Shea Sullivan had a good look at the net, lined up a shot from the point, brought his stick through and completely missed the puck.

It was not unlike his team’s misses in two earlier meetings with the Narragansett/Chariho co-op team.

All of it was rectified on Saturday night.

Seconds after his whiff, Sullivan got the puck back and lofted a shot through traffic and into the net for what proved to be the game-winning goal as South Kingstown beat Nariho 4-3 at Boss Arena. It was the first win in three tries for the Rebels against the Gulls, their rivals having won two non-league matchups in December.

“It was a really good feeling,” Sullivan said. “We’ve all been working hard in practice. We got a lot better from the last time we played them, did what we needed to do and got the win.”

The win moved the Rebels to 4-1 in Division III league play. Nariho fell to 2-2. It wouldn’t be surprising to see the neighbors in the same area of the standings all season, given their close matchups. Nariho won an Injury Fund preseason game over the Rebels and another matchup in a holiday tournament. With the teams now in the same division for the first time since 2015-16, the first of their three league meetings went the other way.

“It’s tough to beat a good team three times in a row, whether it’s league games or not,” Nariho coach Ryan Meade said. “We’ve seen them more than any other team so far. I definitely don’t think it was our best game. Like I said to the team, it seemed like they out-played us, they were a little more physical and stronger on the puck, they won the 50-50 pucks. That gave them more opportunities to score. Those 50-50 battles, giving them a few extra opportunities can make a big difference.”

South Kingstown led 3-1 in the second period when Nariho got a power play goal by Michael Gazerro with 4:28 left. Jacob Correira assisted. Less than two minutes into the third period, Mason Kosiorek scored to pull the Gulls even, with an assist to Rob McHugh.

“That’s exactly what we wanted in that situation,” Meade said. “Coming into the third period down by a goal, getting the first one is huge. We tied it up, kept it there for most of the third period.”

Sullivan’s game-winner came with 5:01 left. Colin O’Grady made a pass from the corner out to the right point. Sullivan immediately aimed for the net – then whiffed.

“My teammate Colin passed the puck to me. I got a little nervous because at first, I whiffed on it,” he said. “I thought they were going to get it, but I got the puck back. I didn’t even really look at the net. I just ripped it and I got lucky. It went far side, top corner. It was an awesome feeling.”

“At the end of the day, they got one,” Meade said. “I was right behind that shot. It looked like a lot of traffic in front of the net and the goalie just lost sight of it, it floated right over his glove. Just a tough break. But they got more opportunities, so sometimes those tough breaks are going to happen.”

The goal fit with the theme of the night for the Rebels – keep the puck in and get it to the net, whether it was pretty or not.

“We really put a lot of focus on doing some simple things a lot better,” head coach Rick Angeli said. “We really felt like we could do a better job of controlling the game if we played in their end most of the night. We did a pretty good job early on, getting pucks deep and putting pressure on their D. We scored our first two goals on grinding them down low. We’re talking a lot about doing what it takes to win, in terms of building the culture here. They’re starting to get it.”

O’Grady, Cody Granville and Nevin Dinonsie had the other Rebel goals. Granville and Eison Nee each had two assists. Joe Bruno made 19 saves.

“This was a big win tonight. I’m really proud of their effort. It was outstanding. Every time Nariho kind of pushed back, we pushed back again,” Angeli said. “It’s hard to explain, but they’re beginning to feel what it’s like to do those simple things well. We don’t have a team that’s so supremely skilled that we’re going to beat teams with skill. We’re getting better structure-wise, we’re getting better in all three zones. We’re getting decent play from our goaltenders. It’s been good.”

McHugh had Nariho’s other goal. Correira finished the night with two assists and Kosoriek had one. Goalie Ryan Moricas finished with 27 stops.

“We’re 2-2 in the division now,” Meade said. “We expected to be in this range at this point in the season. It’s been a little tough to get going. We had some guys playing a ton of minutes tonight, with a couple of our guys out because of COVID. We had two lines for the most part and had two wingers rotating in. We had almost a week and a half without a game so we haven’t been able to get the consistency going yet.”

The Gulls returned to the ice Sunday and dropped a 3-1 decision to Ponaganset. South Kingstown made it three league wins in a row on Sunday with a 6-3 win over Mt. Hope/East Providence. The Rebels’ only loss in league action came against first-place Coventry.

And now two non-league defeats have been avenged.

“There’s a lot of energy that goes with playing Nariho,” Angeli said. “We felt as though we could play with them, but they had our number twice. As we’ve gone on, we’ve been able to figure some things out with our personnel. And tonight, I think we were a little more balanced between the three lines. We were able to take some of the load off our top guys, and I think that helped a lot.”