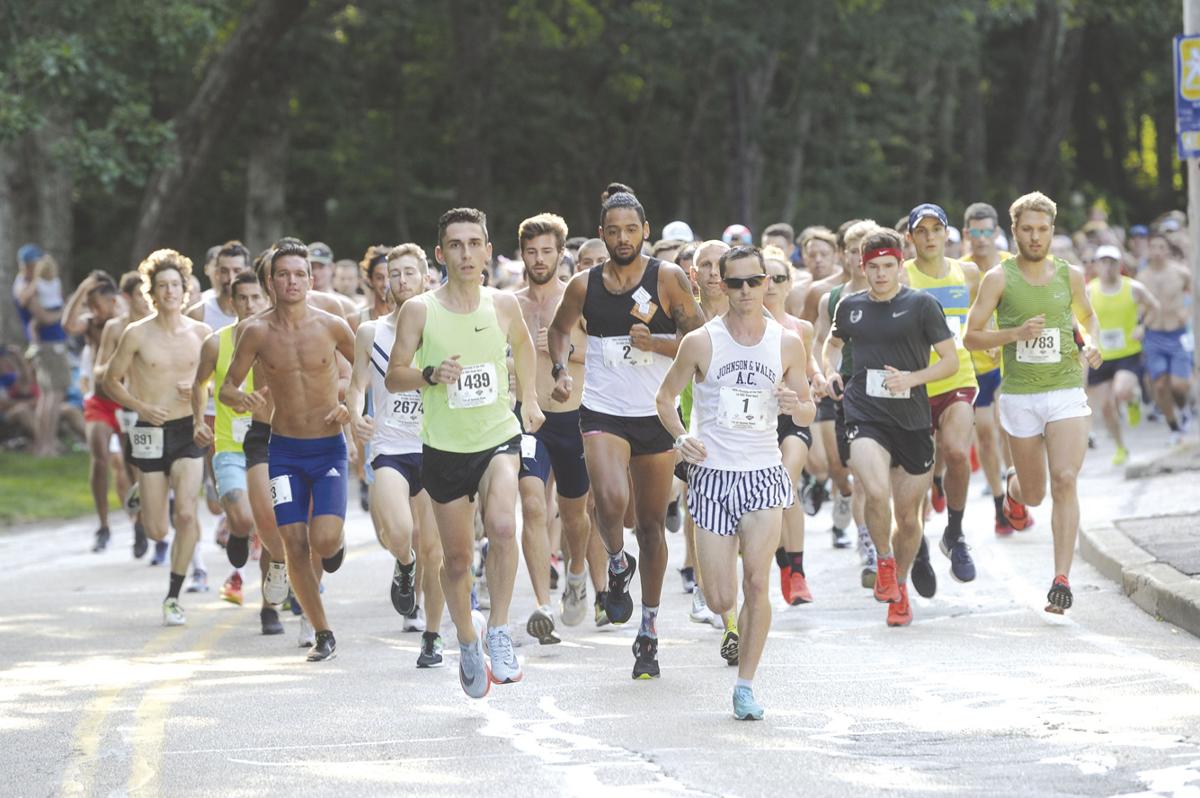 Runners jockey for position at the start of Friday’s race. 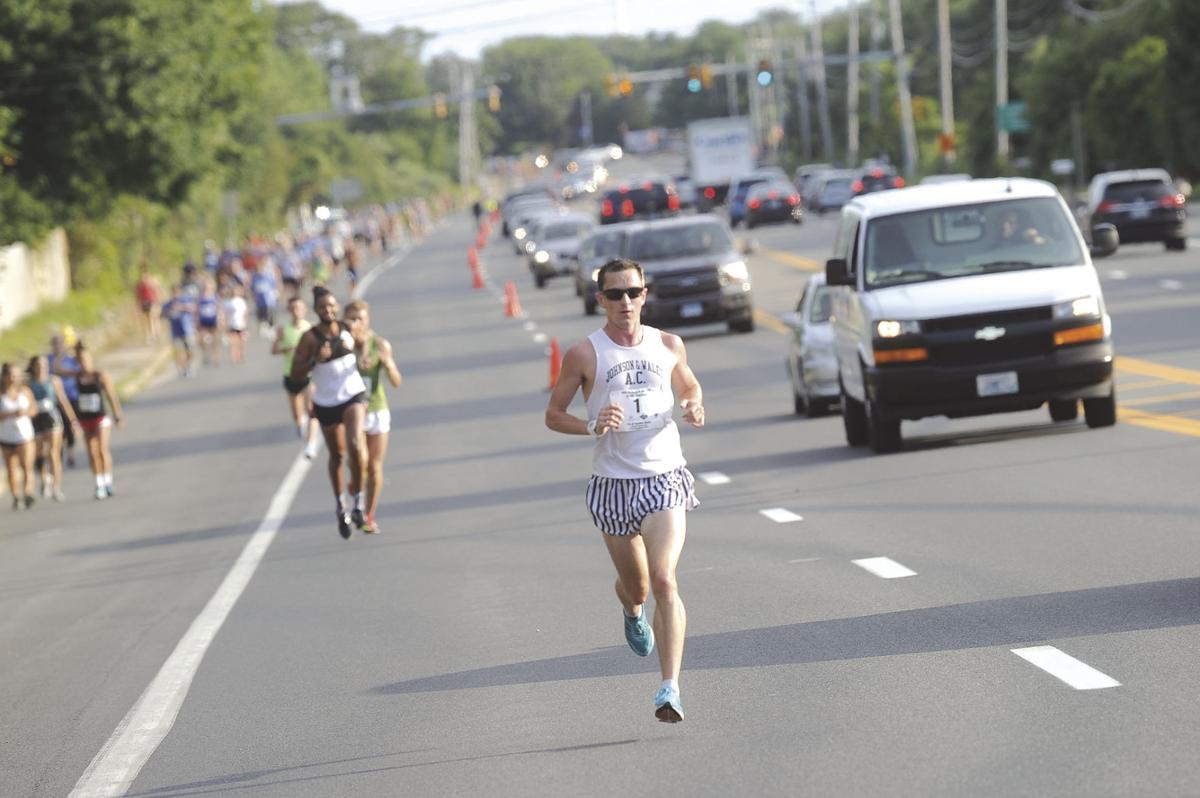 Brian Doyle leads the pack during Friday's Blessing of the Fleet Road Race. 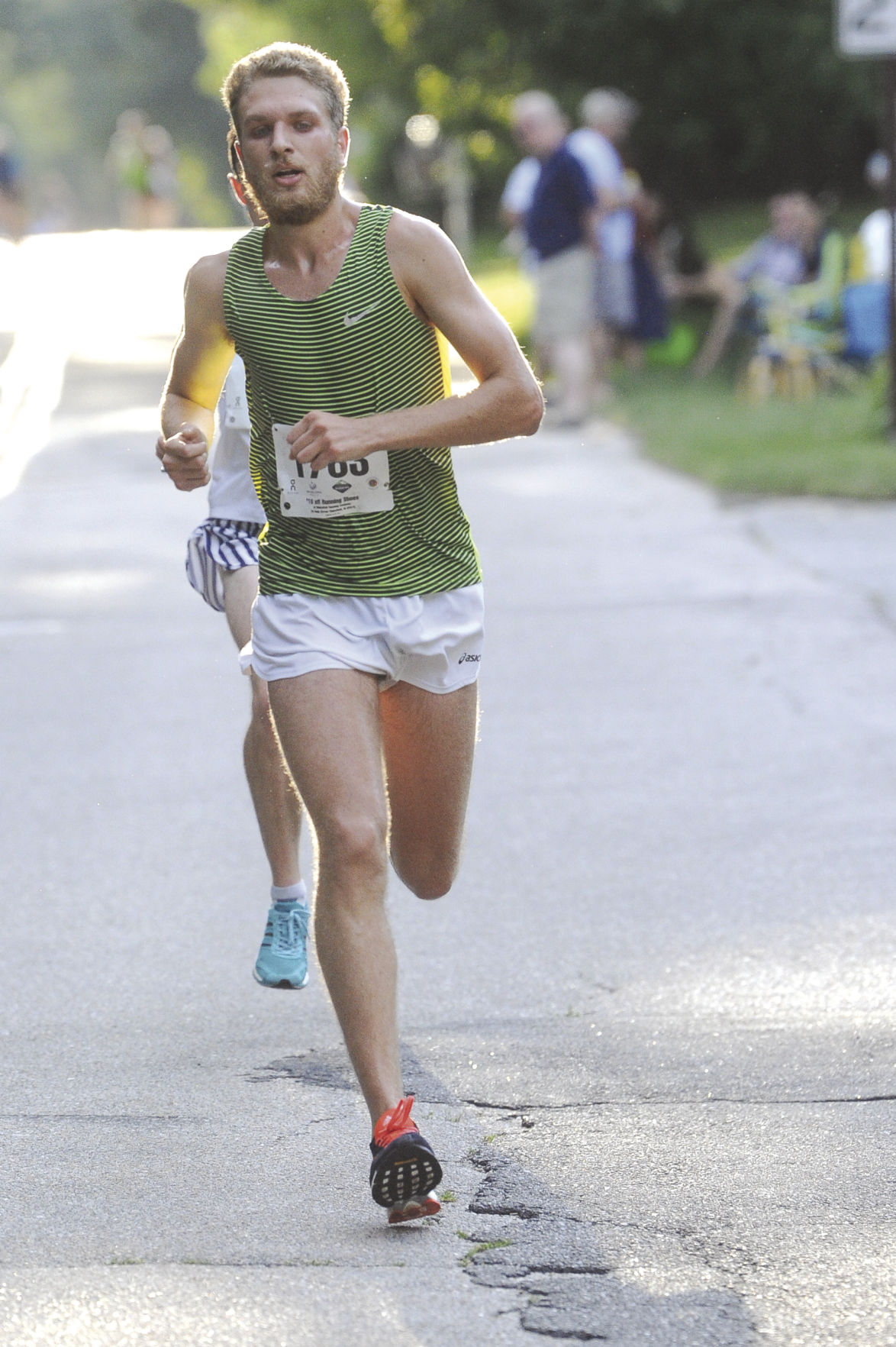 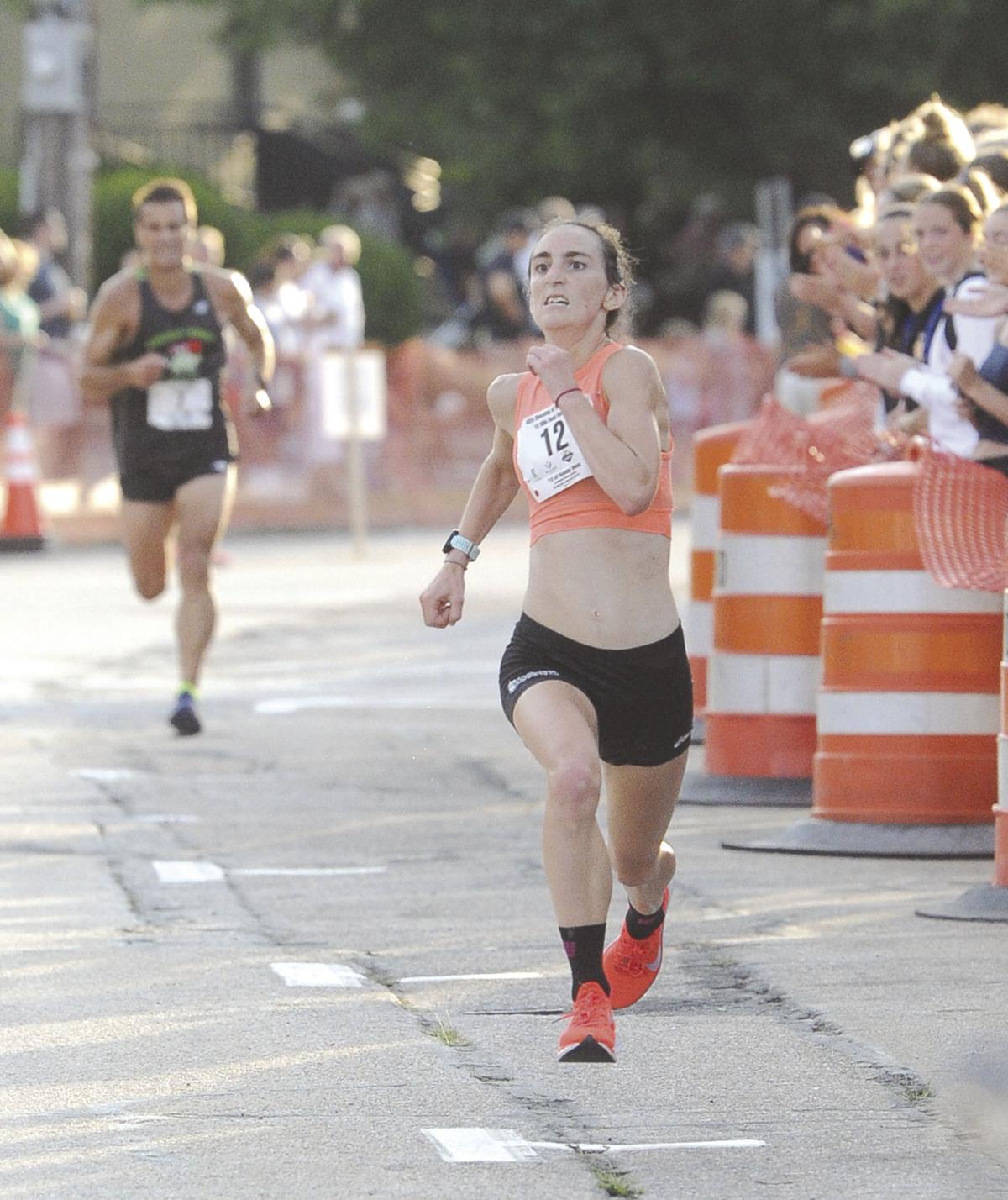 Annmarie Tuxbury, of New Hartford, Connecticut, was the first female finisher in Friday's Blessing of the Fleet Road Race. She finished 25th overall with a time of 57:22. 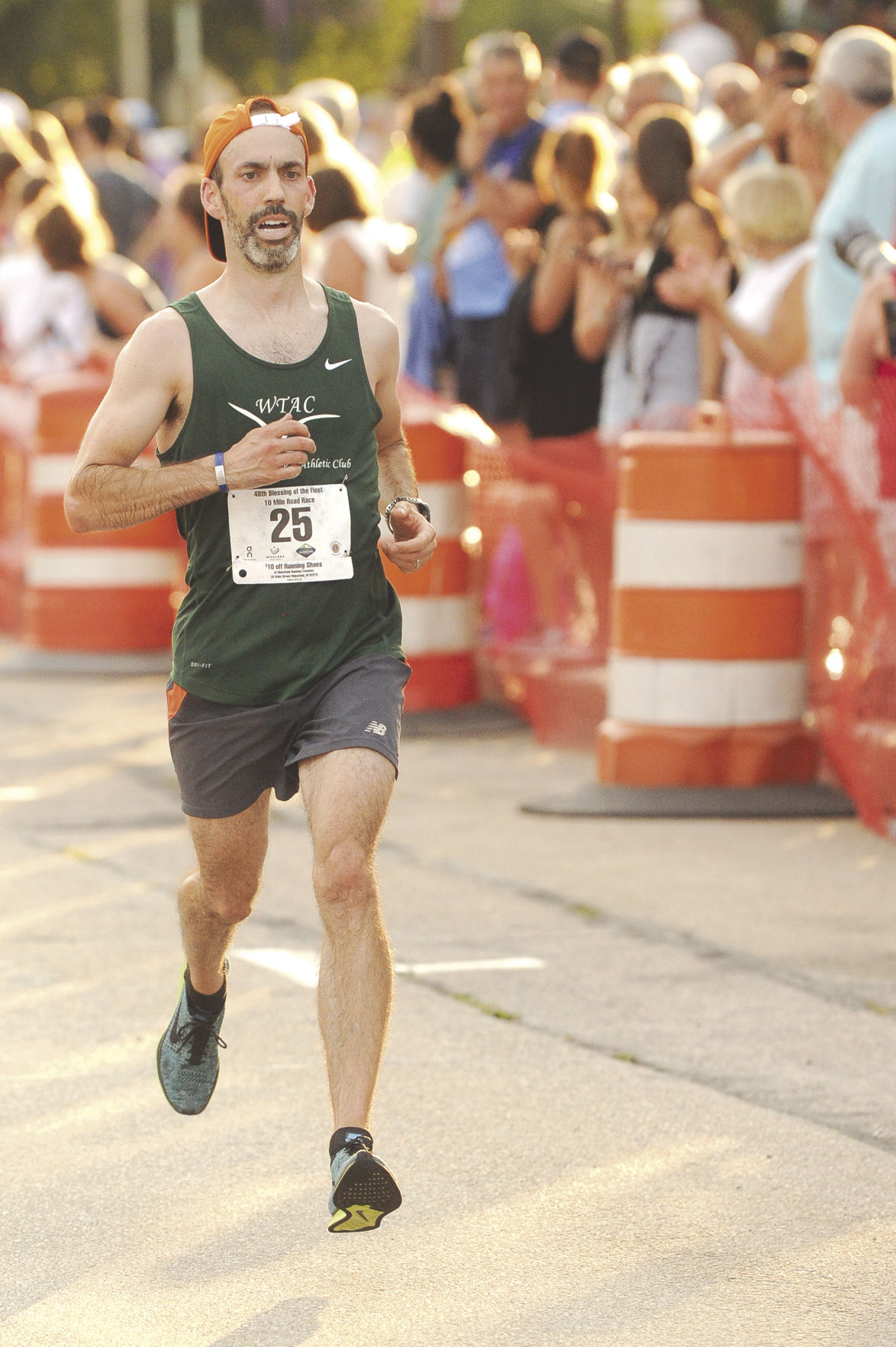 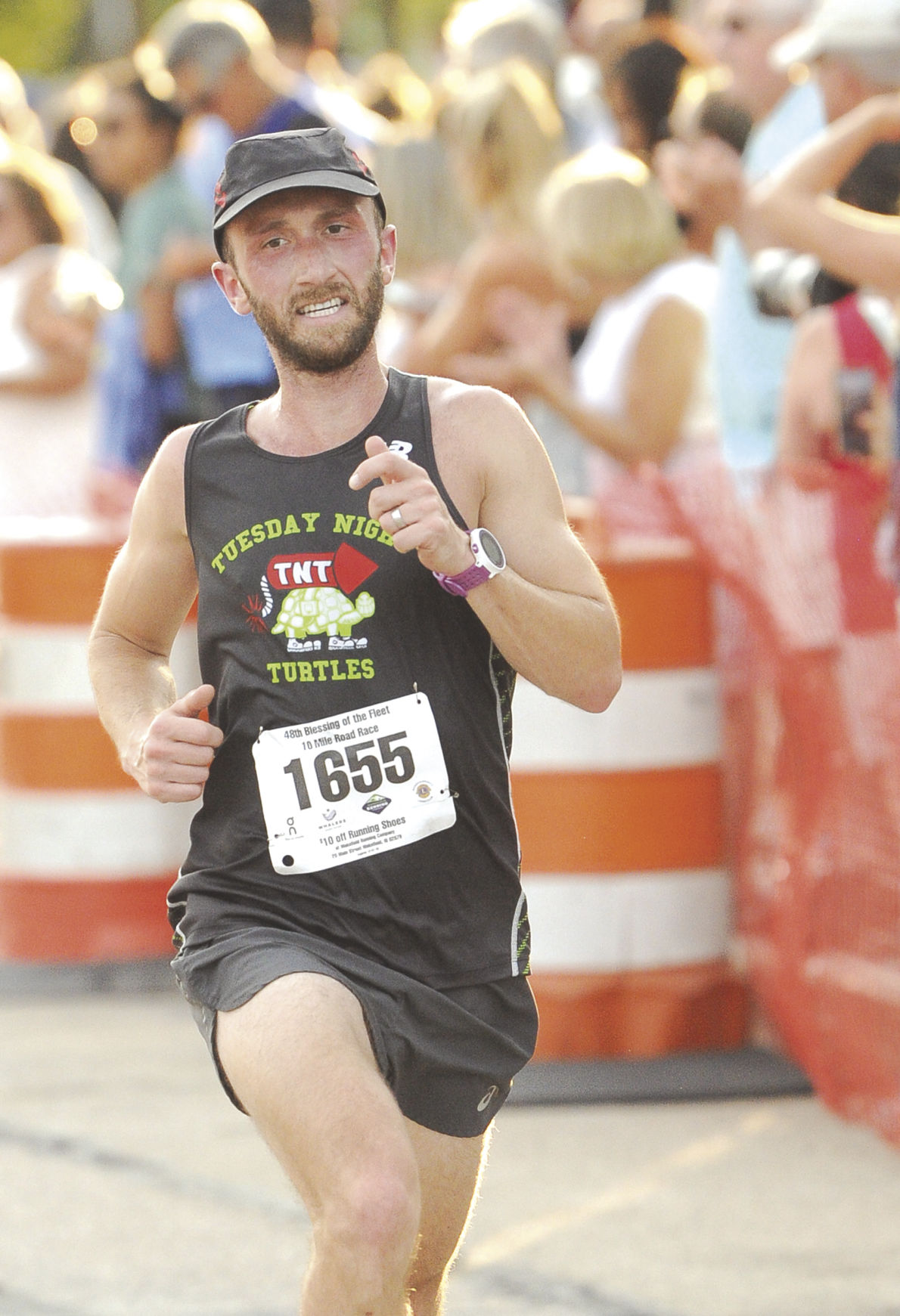 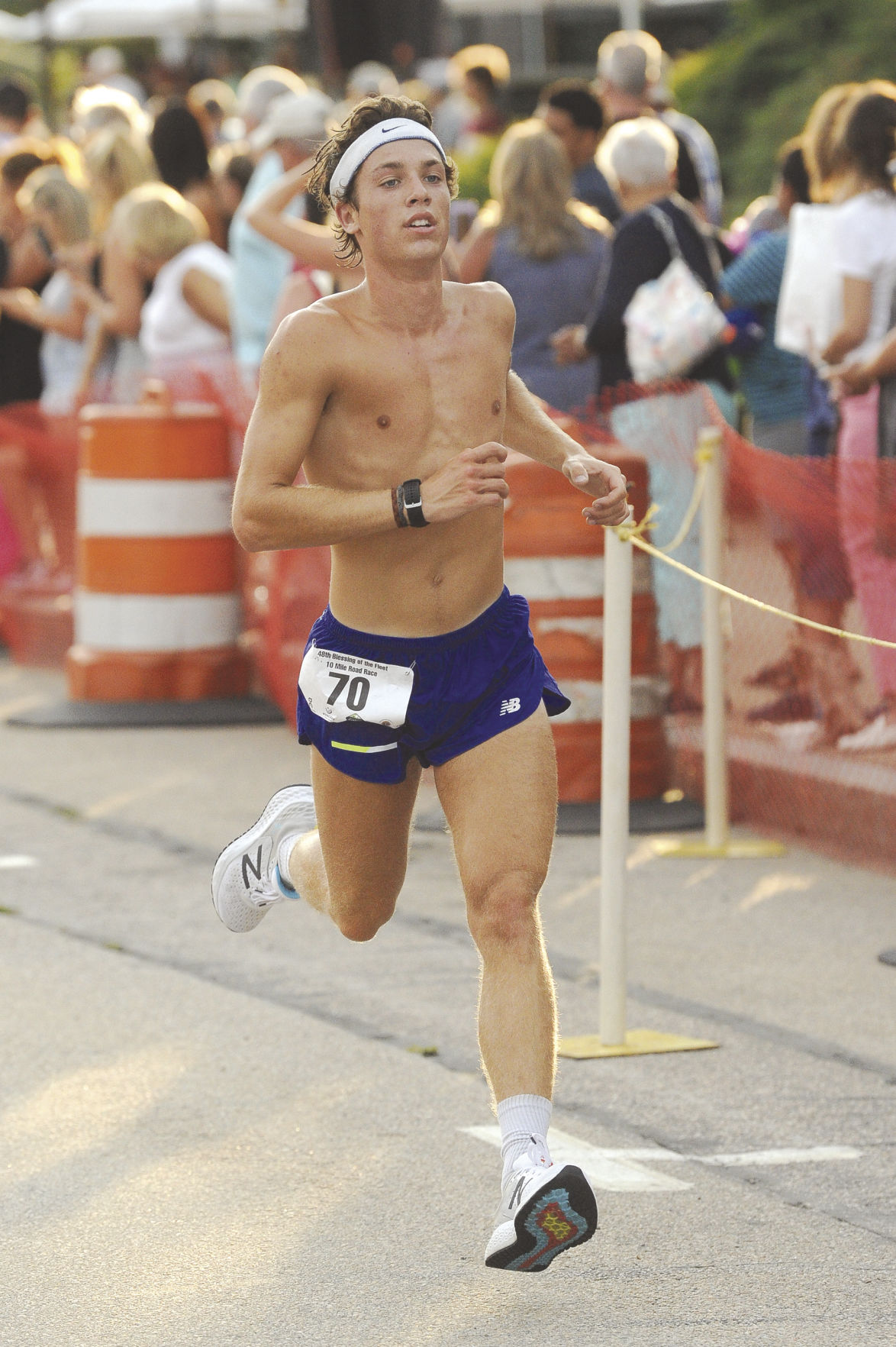 Tim Sheehy, of Wakefield, finished 46th overall with a time of 1:01:12 in Friday's Blessing of the Fleet Road Race.

Runners jockey for position at the start of Friday’s race.

Brian Doyle leads the pack during Friday's Blessing of the Fleet Road Race.

Annmarie Tuxbury, of New Hartford, Connecticut, was the first female finisher in Friday's Blessing of the Fleet Road Race. She finished 25th overall with a time of 57:22.

Tim Sheehy, of Wakefield, finished 46th overall with a time of 1:01:12 in Friday's Blessing of the Fleet Road Race.

NARRAGANSETT — Brian Doyle makes an annual trip back home to Rhode Island for the Blessing of the Fleet Road Race, and he’s going to have to keep it on his calendar.

The Tiverton native has a streak to protect now.

Doyle took his second straight title on Friday evening in Narragansett, winning the 48th edition of the 10-mile race in 52 minutes, 2 seconds. He pulled away from Ian Steller and seven-time champ Matt Pelletier to claim the top prize again.

“It’s always great to come back,” Doyle said. “I was saying to my friends before the race, this really is a staple of Rhode Island. It’s always the goal – just come up and have fun. It’s cool to win it twice. Hopefully, I can come back. I don’t know if I can get to Matt’s seven, but two is fine.”

Steller, a Providence College runner, moved up one spot from last year’s third-place finish to take second in 52:21. Pelletier took third in 52:50. Jeff Venter of Exeter and Andrew Dionne of Fayetteville, New York, rounded out the top five.

Under sunny skies and much less humid conditions than the last few years, Doyle and the lead pack set out on South Pier Road with course record thoughts on their minds. The pace ended up being slower than that, as Doyle finished almost two minutes behind last year’s title time. That put the goal of winning on center stage.

“I was going to evaluate at six miles,” Doyle said. “If we were close to that course record pace, I would go for that. But today we weren’t even close. So I just wanted to go and win and have fun – hang out with my friends after. It’s great to come back.”

Doyle ran at Bishop Hendricken, Northeastern and Providence College and is now an assistant coach at Davidson College. He found himself stride-for-stride with a former Hendricken teammate for the early part of Friday’s race, as he and Bronson Venable broke away from the field, along with Ben Fazio of Troy, New York. All three held the lead at one point. Venable is a former state cross country champion who beat Doyle earlier this year in the Gaspee Days 5K, providing a push toward the Blessing.

Doyle took the lead on Route 108, just as he did last year, though it wasn’t without an adventure this time. A race official in a pickup truck cut in front of the pace car for some reason, and the lead runners actually passed the pace car before order was restored. The field briefly bunched up as a result, though Doyle still had the lead at mile five. Steller gained on him and the two traded the lead between mile seven and eight before Doyle broke away on South Pier Road. By mile nine, Doyle was by himself and cruising to another title.

Like last year, he had plenty of people cheering him on, with brother Brendan and uncle Jim providing water, time updates and encouragement at various points on the course.

“He tells me I stink,” Doyle joked about his brother. “It’s good for him to be out there. I appreciate it. The whole family. He’s always just encouraging. He doesn’t worry about the splits or who’s anywhere. It’s just, ‘Hey, go run hard.’ That’s the only thing he’s ever really said – run hard and run tough. I’ve always appreciated it. That’s why I think I was successful in college because of him. He’s one of the least talented guys I know. He runs and he’s not smooth at all. But to see him be as successful as he was, it’s because of his head, and that’s something I’ll always take from him.”

Tuxbury shaved more than a minute off her time from last year in her repeat. She had a five-minute edge on the second-best female finisher, Kylie Raymond.

“I think the conditions were perfect, especially compared to last year,” she said. “Last year was pretty hot and humid. I don’t think we could have gotten a better day today.”

Tuxbury was making her third appearance in the Blessing of the Fleet and has now taken top honors in two of the three. Even without the wins, the race would be one of her favorites.

“I like all the people on the street. Especially for a race as long as 10 miles, it’s unusual to have that,” Tuxbury said. “It’s really a community event, I think.”

John Packhem won the walk in 1:54:05, with Mary Ann Crellin in second.